The Most Overrated 4x4s 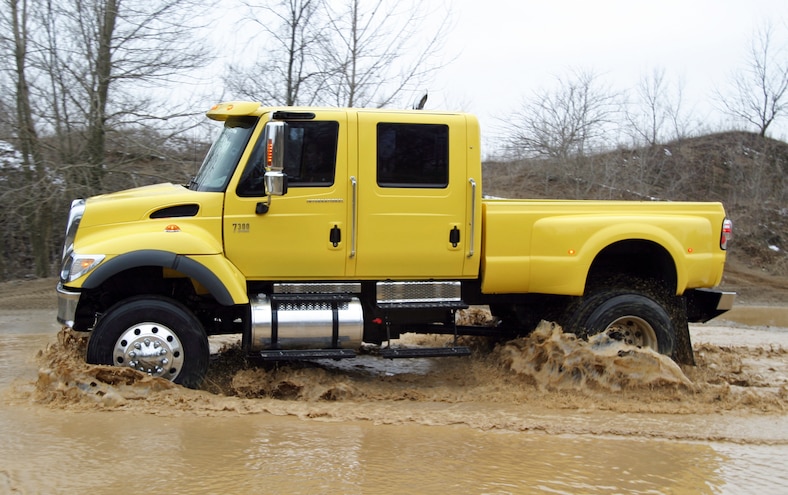 When it comes to 4x4s, certain brands stand out from the pack. While the Jeep Wrangler Rubicon is by far the most capable out-of-the-box trail vehicle we’ve ever tested, it doesn’t hold a candle to the Ford Raptors go-fast desert conquering abilities. The point is, neither vehicle is a penalty box off-road. Both live up to the hype and won’t leave you wondering what all the fanfare was all about. Unfortunately, not ever big name “off-road” oriented rig lives up to the buzz.
Here, the Four Wheeler Network Editors put together a list of some of the most overrated 4x4s. Not surprisingly, one named surged to the top. We’re not saying these are bad vehicles, just a bit too glorified for what they are really capable of.
Hummer H1
Ali Mansour
Technical Editor, Jp Magazine
I have a love/hate relationship with the Hummer H1. On one hand, I find the rigs to be visually appeasing and the gearhead in me loves the portal boxes. The main issue I have is with the underpowered and issue-prone 6.5L diesel engine. Couple this underwhelming V-8 with AMC 20 differentials that are flipped upside down (to allow the portal gears to spin forward) and you have plenty of weak links. Most civilian H1s were also fitted with open differentials. Since the H1 flexes as well as a thick piece of plywood, it greatly reduces its off-road ability. Sure, there are ways to make the H1 better, and the last-gen Alpha-edition solved some of the issues. At the end of the day, it’s just not the off-road dominator that most reveres it to be. 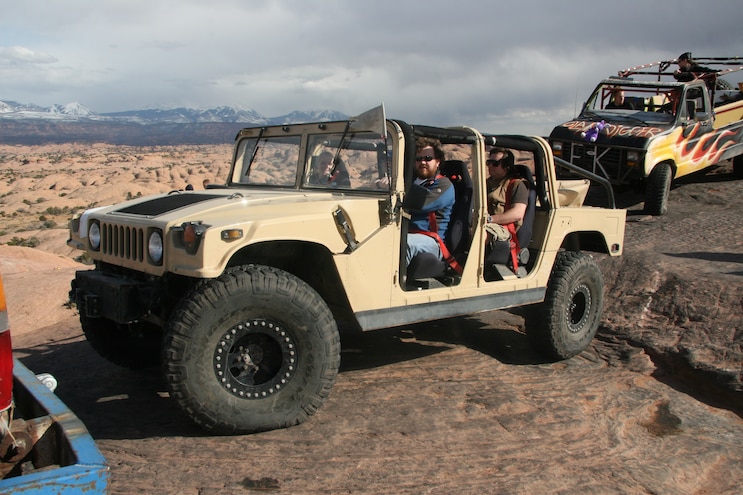 View Photo Gallery | 8 Photos
Photo 2/8   |   H1 Hummer Moab Hells Revenge
CXT
Ken Brubaker
Senior Editor, Four Wheeler
What is the most overrated 4x4 of all time? I’m going to say the International CXT. When International plodded out the truck it was reviewed or written about by what seemed like hundreds of media outlets. Us included. The hype was incredible and the CXT was so over-the-top that it even caught the attention of TV and movie stars, some of who went out and bought one. Was the CXT tough? Yep. Did it look cool? Oh, yeah. It was basically a commercial heavy-truck with a Ford bed on the back. Was it overrated? In my opinion, yep. I cite three things. First, it needed a CDL with air brake endorsement to drive (which made it impractical for most people). Second, the bed height was so tall it was almost impossible to use in a practical fashion. And third, it wasn’t in production for very long, which speaks for itself.

View Photo Gallery | 8 Photos
Photo 3/8   |   Cxt
Hummer H2
Matt Emery
Editor, Dirt Sports+Off-Road
I would have to say that the Hummer H2 is the most overrated 4x4. Yes, Arnold may love them, but they have a lot of problems for everyday wheeling. Sure, the original mil-spec H1 may have taken our troupes across the Iraqi desert, and Rod Hall Racing has seen some success with them in Baja racing, but those were in wide-open terrain for the most part, and they’re all wrong for the majority of off-road driving.
First, they’re just too wide to fit on most two-track trails. There are many trails that a standard Jeep barely fit on, let alone a Hummer that’s a couple of feet wider. Second, they get lousy mileage. That may not be a concern for some, but when a vehicle only gets 10 or so miles per gallon, that limits the amount of seat time that you get. Third is that there is simply not many aftermarket parts available for them. You can hang lights and such on them, but what you get is what a vehicle that’s hard to make truly dirt-worthy simply because upgrading things like suspension and other items is limited.
Next is that they just have a negative connotation with many in the off road community. Be honest; what’s the first thing that comes to your mind when you see someone in a Hummer at the trailhead? The guys a goofball, am I right? That they’re not serious and probably have a DUB sticker on it somewhere.
Put them all together and you have what I feel is the most overrated 4x4 of all time. 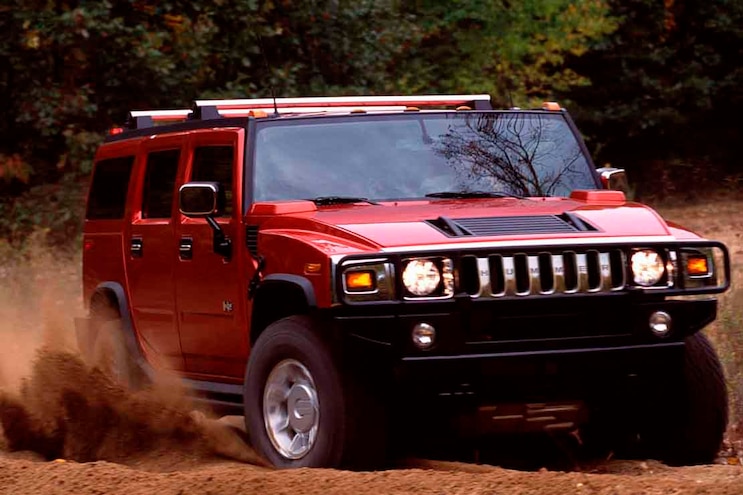 View Photo Gallery | 8 Photos
Photo 4/8   |   Overrated 4x4 Hummer H2 Low Angle Front Three Quarter
Hummer H2
Christian Hazel
Editor, Four Wheeler
To me, there’s no doubt the title, “Most Overrated 4x4 of all Time” has to go to the choice of soccer moms, failed real-estate flippers, and the mall crawling crowd everywhere: Hummer H2. There’s no denying the capability and purpose-bred nature of the H1. And the H3 was a darn good little vehicle. But the H2 was, in my opinion, just a marketing gimmick in which image took a front seat to function. They were impossible to see out of, awkward to wheel, and got horrible mileage. Still, the same is true of many off-road-bred vehicles and GM’s sales numbers from the boom times of the early ‘00s would paint a different story. The H2 came with 35-inch BFG rubber, the engine choices were GM’s excellent 6.0L or 6.2L V-8, and it had a true locker in the 9.5-inch 14-bolt rear axle. But I call overrated for one very specific reason: the factory front suspension and steering was a joke. You put these big, heavy tires on a vehicle that weighs north of 6,000 pounds and then leave the spindly ½-ton GM tie rods, idler arms, steering box, unitbearing hubs, and other under-engineered components that are taxed on a stock pickup only used on the pavement? Stupid. Not the recipe for off-road success. And when you’re building a vehicle that’s standing on the capable shoulders of the H1, the factory needs to go the extra mile to ensure the linkages won’t fold at the first boulder and render the vehicle a huge road block in the trail. I’ve personally welded the broken steering linkages of two H2s just so the owners could move them off the trail and onto a tow truck and I know many, many others suffered similar fates. They can be built to be better, but the same can be said of almost any vehicle. 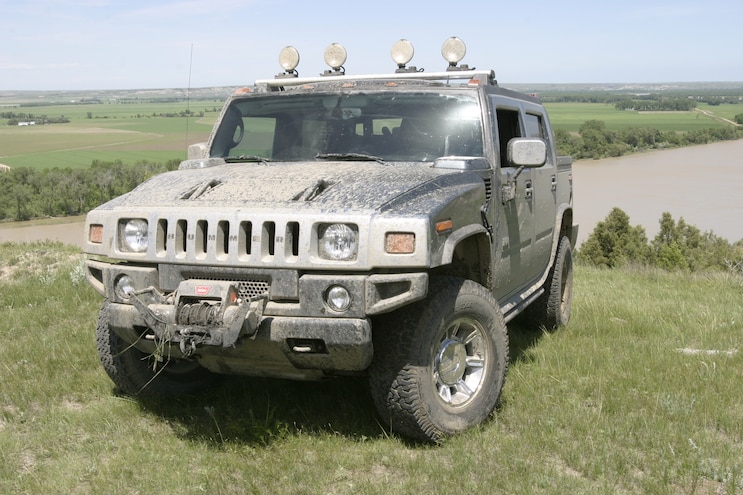 View Photo Gallery | 8 Photos
Photo 5/8   |   Offroading For A Living Hummer H2 Sut South Dakota
Hummer H2
Vern Simons
Tech Editor, 4-Wheel & Off-Road
In my opinion the most overrated 4x4 of all time is has to be the Hummer H2. This behemoth of a vehicle is the real life version of the Canyonero spoof from the Simpsons TV show (google it). Following up the also overly large, but somewhat utilitarian military Hummer H1 (which has many, many faults, but at least seems to work off-road), the H2 is the epitome of American excess that harkens back to magazine project and feature vehicles of the late 80s. That is to say, big, flashy, and bound to get really stuck or very broken if actually used off-road. The H2 has a great engine in its GM Gen III 6.0L or 6.2L…a great engine for a swap into another vehicle. The rear axle is an "ok" semi float 14-bolt with an optional locking differential. The real problem comes from the H2s pathetic front steering and dubious front axleshafts. Put them under load off-road (under a 6400-6600lb heavyweight) and things are going to explode (see youtube videos). The other problem is this behemoth won't fit between two parked cars, let alone down a narrow twisty trail. Oh, and how does 15-9 mpg on the road sound? 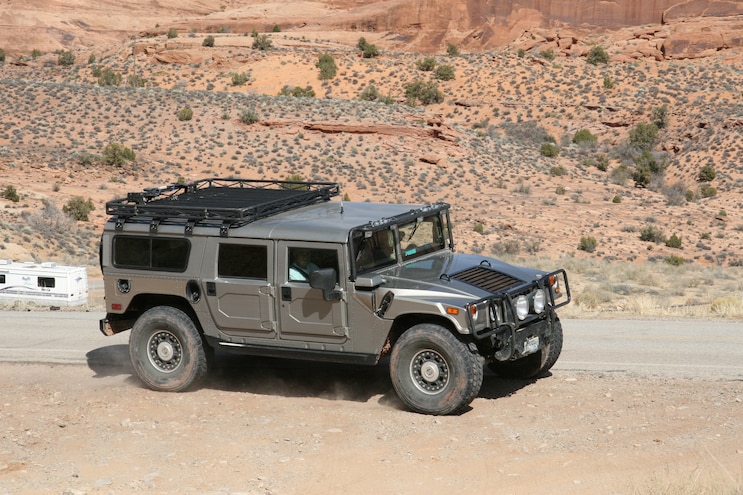 View Photo Gallery | 8 Photos
Photo 6/8   |   H1 Humm Er Trail Utah
H1 & H2 Hummers
Fred Williams
Editor, Petersen’s 4-Wheel & Off-Road
What is the most overrated 4x4 of all time? This is a hard question. I think Hummers are pretty ridiculous, but the H3 was available with a v8 and both front and rear lockers, so that version seems to make up for the obnoxious H2 model and the giant H1 that has plenty of ground clearance but hardly any room inside for passenger. I like Land Rovers, but older discoveries are dirt cheap and have terrible resale value and plenty of gremlins. But the defenders on the other hand seem to have no problem demanding prices above $30,000! Of course everyone loves jeeps, but oddly enough we’ve been swapping bigger engines and axles in Jeep CJ’s for about as long as they were around. In stock form a Jeep CJ is a lot of fun, but are they overrated when you consider that 4-wheelers have no qualms with swapping drivetrains in them? In closing I’ll just remind everyone that even though I think the FJ Cruiser has terrible visibility, horrible design, and didn’t quite reach its goal as a Jeep Wrangler Fighter, I still see tons of them on the road going overlanding, and it definitely has a better engine than the early Wrangler JK’s. I guess I’m saying no 4x4 has ever been perfect out of the box, but that’s fine, we love to change stuff to make them better. 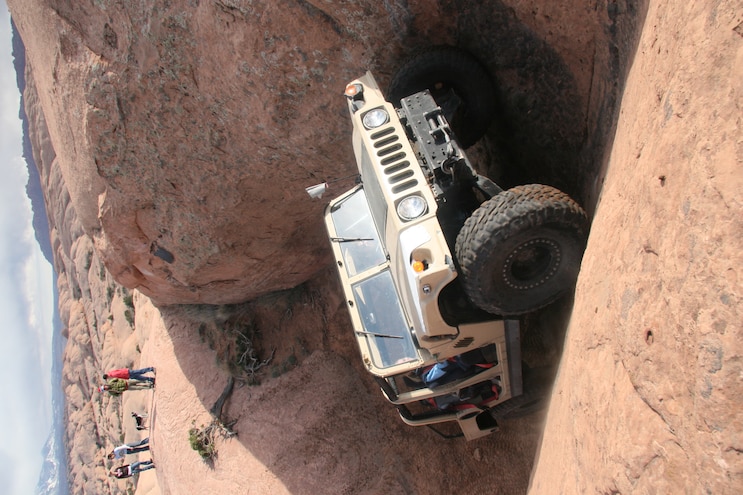 View Photo Gallery | 8 Photos
Photo 7/8   |   H1 Hummer Moab
Volkswagen Trophy Truck
Shaun Ochsner
Associate Editor, Dirt Sports + Off-Road
The most overrated vehicle of all time…I am not sure I can identify anything in my world that is “overrated” however the VW Toureg Trophy Truck has to be the most over-hyped short lived project that has come to off-road. The Touareg team raced the 2007 Baja 500 with the same vehicles that raced the Dakar Rally. Really those cars are set up for the dunes and not the crazy jumps of Baja, so I guess they did well in the Baja silt. The cars did okay and finished the race. Volkswagen decided to build the first ever clean diesel trophy truck to race the Baja 1000. It had a huge media unveiling at the L.A. autoshow. Keep in mind this truck was new build and never tested in Baja. Volkswagen flew 30 plus journalists from Germany and also brought over a gaggle of company engineers, put them up in hotels for 5 days, fed and entertained them. The company rented 2 helicopters to follow the vehicle on race-day. There was a ton of international hype surrounding the Touareg Trophy-Truck. Right away the thing had motor problems. A seal failed in the gearbox and the team had to swap out the gearbox in the middle of the race. Not good. I can’t remember specifically what the other issues were but I do remember the truck finished 13th. After much hype and attention about this vehicle, Volkswagen canned the race program that next year. A lot may have had to do with the economy in America going down the tubes. I can’t imagine how much money was spent on the program. Today, the frame and body sit on a shelf in a Lake Forest race shop. When the program shut down, Volkswagen took their motors back to Europe. 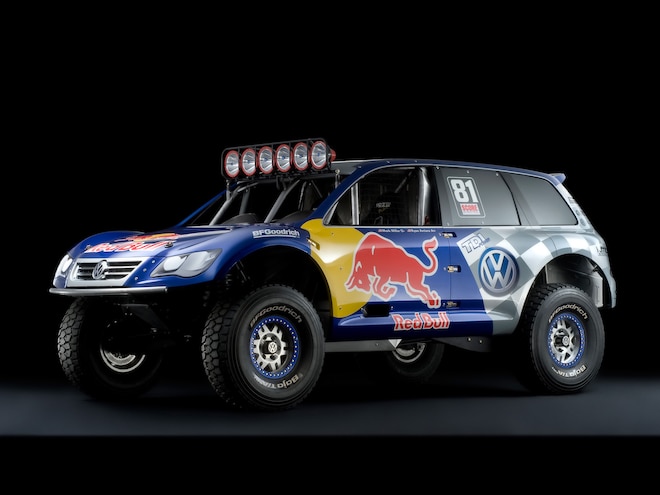 - OF
By Ali Mansour
4 Articles