With 500 hp and 35 mpg, this Chevelle Is Much More than Just a Classic 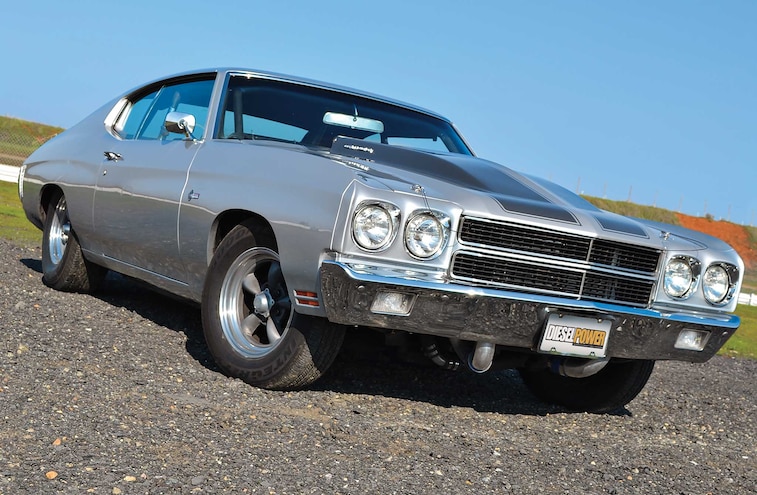 There are some vehicles out there that almost all of us would want. If you had the option to have a diesel- powered muscle car that could run down a new Corvette or Mustang in the quarter-mile while getting 35 mpg on the highway, wouldn't you want one? Well, sorry, they don't exist. But that's why diesel enthusiast Rick Fletes from Galt, California, built his own.

View Photo Gallery | 23 Photos
Photo 2/23   |   The 6.6L Duramax engine fits in the Chevelle’s engine bay like it belongs there. Fortunately for Rick, it doesn’t get 11 mpg like an original big-block Chevrolet engine. Instead, the diesel puts 490 hp at the rear wheels, while achieving 32 mpg combined (city/highway driving).
Since the type of power Rick wanted to have would involve the big and heavy Duramax engine, he chose a car that was up to the task of supporting his muscle-engine swap: a '70 Chevrolet Chevelle. This generation Chevelle is full framed, comes with plenty of engine-bay space, and has a host of aftermarket parts available, which made it the perfect platform for Rick's diesel-motivated muscle car.
One area where Rick chose a different path than many other swap enthusiasts was with the transmission. Because he didn't believe the notion that a diesel engine couldn't work with a non-lockup automatic, he retained the car's factory TH400 and mounts, fabricated engine mounts, and installed the Duramax based on the transmission's stock location. However, while the engine fit, there were a few minor sticking points.

View Photo Gallery | 23 Photos
Photo 3/23   |   There are quite a few spots where the engine fits pretty tightly. At first glance, the Duramax is so close to the steering setup that it looks like it’s hitting the shaft. Some careful grinding of the driver-side exhaust manifold created just enough clearance for Rick to make it work without relocating the steering box.
The oil pan hit the ground (and the steering links), the Chevelle's steering shaft hit the driver-side exhaust manifold, and the engine didn't run, because there was no wiring. Luckily, Custom Metal Works in Salinas, California, was up to the task of modifying the pan, shortening the cast upper section by 2 inches and the lower sheetmetal pan by 4 inches, and adding kickouts. Rick handled the steering situation himself by grinding the exhaust manifold to clear the steering and modifying the two centerlinks into one dropped version.
Since '70 Chevelles came with an optional big-block engine, some elements of the swap weren't as bad as one might think. The radiator is straight from Summit Racing, and a set of Moroso springs and Works shocks from C&E (for a big-block engine) are all that were needed to compensate for the extra weight of the Duramax. A small cowl hood gives more than enough room to clear the turbocharger (thanks to the shortened oil pan), and the engine bay has ample space for the intake and intercooler piping and other assorted hardware.
With the engine and transmission all ready to go, Rick decided to tackle the wiring project himself, and he spent two months tying in a harness and sensors from a donor truck.
For any project vehicle, reliability is always a concern, especially once its engine runs and it's driveable. A Duramax can crank out more than 900 lb-ft of torque at the wheels with only a PCM tune, which is hard on drivetrain parts. Since Rick wanted the Chevelle to be his daily driver, he definitely didn't want to deal with the car breaking down on a regular basis.

View Photo Gallery | 23 Photos
Photo 7/23   |   The factory Garrett turbocharger has been reliable over tens of thousands of miles, while still providing enough air to push the car to achieve 11-second time slips. With the current tune, Rick says he sees about 28 to 32 psi of boost when his foot is planted on the floor.
Remember that TH400 transmission we mentioned earlier? Well, it's been upgraded substantially by Rick himself with a billet input shaft, CK Performance reverse-manual valvebody with transbrake, and upgraded direct and forward drums with a 36-element sprag. Rick stated that the reason for the modified internals is simple: He had broken all the stock pieces. A big part of making the whole thing work is an extremely tight 1,500-rpm stall torque converter built by PDQ in Sacramento, California. The steel-stator converter combined with the stock turbo is what allows the combination to transfer a dyno-proven 490 hp to the ground, without the need for a lockup converter.

View Photo Gallery | 23 Photos
Photo 8/23   |   With space at a premium under the engine, both the radiator hoses and intercooler piping (which were fabricated by Galt Machine & Welding) snake in front of the engine and behind the front bumper. They hang just low enough for onlookers to notice and start wondering.
The rest of the driveline is equally strong and holds quite a few tricks. Mated to the back of the TH400 is a Gear Vendors Overdrive unit, which Rick uses as a Fourth gear while cruising on the freeway. Also from Gear Vendors is a custom 3.5-inch driveshaft that sends power back to a 3.00:1-geared Ford 9-inch rear end, which features a Detroit Locker, 35-spline axles, a nodular iron centersection, and a 1350 series output yoke. After years of use (and a number of broken parts), the driveline that's currently in the Chevelle handles the power quite well.
If you've been wondering why we haven't talked about the engine much in a lead role, that's because, well, it's stock. Rick pulled a 50,000-mile '04 6.6L LB7 engine out of a wrecked truck, added an extremely hot tune from Adrenaline Truck Performance, and called it a day. The engine still has its stock head bolts and turbocharger and, aside from an MBRP downpipe, custom Willis Automotive 3-inch exhaust, and an owner-built cold-air intake, the LB7 is just as it came from the factory.

View Photo Gallery | 23 Photos
Photo 9/23   |   With the tight torque converter and torquey diesel engine, a lot of heat is generated. To keep the transmission alive, an external cooler with its own small fan was mounted in front of the radiator and behind the grille.
With a bone-stock (but tuned) engine, how fast can this muscle car be? Well, Rick reports that with a set of 29.5x10.5-15 Mickey Thompson slicks, the Chevelle has run as fast as 11.26 seconds at 118 mph in the quarter-mile, with a 1.59-second 60-foot time. What's even better, though, is the unique hot rod's fuel mileage. While mileage for Chevrolet's big-block cars was advertised as 11 to 13 mpg, Rick's Duramax-powered ride gets approximately 27 city, 35 highway, and 32 mpg combined while performing its daily driver duties. If you don't believe those numbers, Rick has plenty of e.t. slips and fuel receipts to prove it.
Logging more than 40,000 miles since the car was completed in 2009, Rick makes one thing clear...he drives it! If you're going to build your own dream machine, he says, you might as well enjoy it as much as possible. We wish him luck on his journeys.
Fast Facts:
Year/Make/Model: '70 Chevy Chevelle
Owner: Rick Fletes
Hometown: Galt, California
Odometer: 80,000 miles
Engine: 6.6L Duramax LB7 V-8
Fuel: Holley Blue 110-gph lift pump, owner-built fuel lines, and tuning by Adrenaline Truck Performance
Intake: Godspeed intercooler and custom cold-air intake
Exhaust: MBRP downpipe and custom dual-outlet 3-inch exhaust by Willis Automotive
Transmission: Owner-built TH400 with a PDQ 1,500-rpm stall torque converter, CK reverse-manual valvebody, billet input shaft, clutch hub, forward drum, and direct drum
Horsepower: 490 hp
Torque: 900 lb-ft
Tires: 215/70R15 Goodyear Integrity (front) and 255/70R15 Falken S/TZ-04 (rear)
Wheels: 15x6 (front) and 15x8 (rear) American Racing Torq Thrust II wheels
Suspension: Moroso drag springs and C&E shocks (front) and Corvette C3 tubular adjustable control arms, Summit Racing sway bar, Moroso rear springs with C&E shocks (rear)
Rear axle: Ford 9-inch with 3.00:1 gears, 35-spline axles, Strange Engineering nodular-iron third member, Detroit Locker, and Gear Vendors 1350-series pinion
Fun Fact: Rick says he leaves the line on the transbrake at 20 psi of boost, shifts at 3,500 rpm, and then clicks on the Gear Vendors Overdrive—all within a single quarter-mile pass.
A Pro Street Life
If you were thinking the Chevelle sounds a bit overbuilt, that's because a few years ago Rick teamed up with Russ W. from RPM Motorsports and the two ran the Chevelle in the NHRDA Pro Street Class. With Russ providing a 1,000hp engine and with the team running triple 66mm turbochargers, the Chevelle went as quick as 9.79 seconds at 141 mph in the quarter-mile at an NHRDA-legal weight of 4,560 pounds. After a horde of broken parts (they even kept two Gear Vendors overdrive units handy at all times), the team decided to build a lighter car: the Duramax-powered Nova that was featured in our November '14 issue. Thus, Rick's Chevelle was put back on the street—albeit with a healthy driveline and 8.50-certified rollcage—to perform its daily driving duties just as it has always done.

View Photo Gallery | 23 Photos
Photo 16/23   |   Notice anything odd about the front of the engine? Yep, there’s no fan! Rick reports that with the help of an aluminum radiator from Summit Racing, the diesel engine runs so cool he can drive the car around without a fan, even in the summer.

View Photo Gallery | 23 Photos
Photo 23/23   |   Since the Chevelle runs deep 11s, this trick rollcage was built by Joe’s Custom Metal Works to allow backseat access, yet its still certified as being legal for running 8.50 seconds in the quarter-mile.