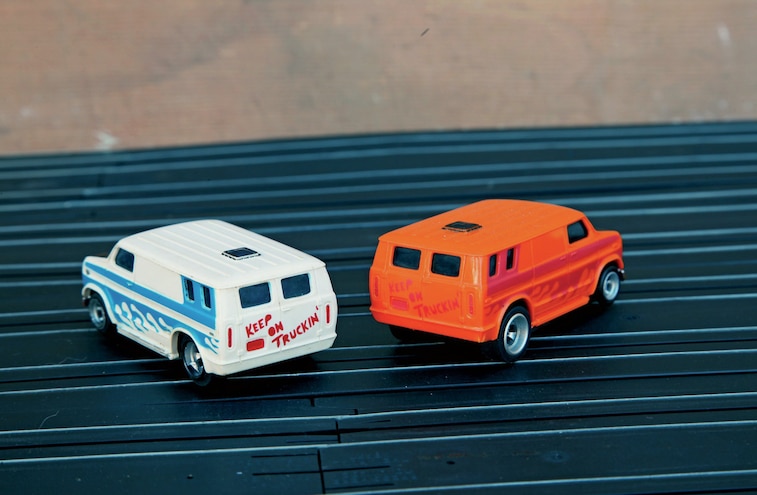 Would you believe me if I told you that in a week I bought three vans, a Blazer, and a square-body stepside? Well, it’s true. On a whim, I jumped on eBay and tooled around for a while and soon I had a whole new stable of vehicles. Of course, they’re all made of plastic and they’re also 1/64th scale, as you can see in the photos. Let’s face it; we all know you can’t afford to do that on a magazine editor’s salary.
It started pretty innocently enough. We were pulling all of our Christmas stuff out for the year (it’s still the holiday season as I write this) and I happened upon my giant bin of old Tyco racetracks. I got my first one, the Super Stockers Magnum 440 Petty vs. Yarborough, when I was still pretty small and acquired a few more in the next few years, complete with some 360 loops, banked turns, some “Cliff Hangers,” and even some glow-in-the-dark stuff (must’ve been well into the ’80s by then). I at least had the wherewithal to put it all into a sealed bin at some point, but it had been at least 20 years since I’d checked it out, so I really had no clue what all was in there. I had the bright idea to grab the box and see if I could get a small track going to put around the Christmas tree. I got the thumbs up from the girlfriend, so that night became a long process of slowly emptying the bin. When I got to the bottom I had all kinds of neat stuff, but no controls or powerpack, and the only cars left were a semitruck chassis (you can tell by the mud flaps) and a Smokey and the Bandit body. Since I was now on a mission to have a working display by the time Santa dropped by, I took to eBay and within minutes had the powerpack and controllers headed my way. The cars were another story. I assumed I would be stuck with ’90s stock cars and things of that sort, but man, was I surprised. 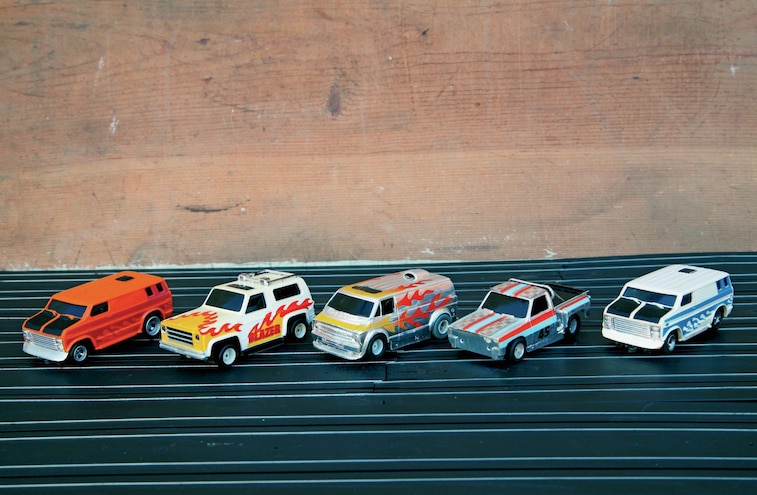 View Photo Gallery | 5 Photos
Photo 2/5   |   Matchbox Cars
I first stumbled on the chrome Dodge Tradesman, circa ’71-73, complete with flares and flames. I had no clue there was a market for ’70s truck and van slots, or even that this stuff existed. I searched further and found a couple square-bodied Blazers; I picked up the white one with more flames. The next night I came across a few stepside C10s, opting for the engine turned with blue- and red-striped model. I had a pretty good fleet on the way, but I just had a feeling there was something else out there that I really needed. The next night I stumbled on the Holy Grail, well if you’re the editor of Truckin magazine, anyway. Not one, but two different versions of a ’75-ish Ford Econoline with “Keep on Truckin” emblazoned across the back doors! At this point all of my time and money were instantly justified. It only made sense that I owned them, right? I went full sniper on both of them, even staying up till 3 a.m. to make the kill for one of them.
Once they showed up, I set everything up and pulled the trigger. Just like buying a 40-year-old full-scale van, I expected some issues with my new slots, so each slow going, scooting with my finger lap was one of victory. I figure I’ll work on this project a little every December; maybe buy some tune-up parts and tires for my fleet next year. Most of us need another project like another hole in the head, but I may be onto something. I spent a relatively small amount of money, had tons of fun, and figured out a way to justify not “finishing it”. Most importantly, I made it all about Truckin!