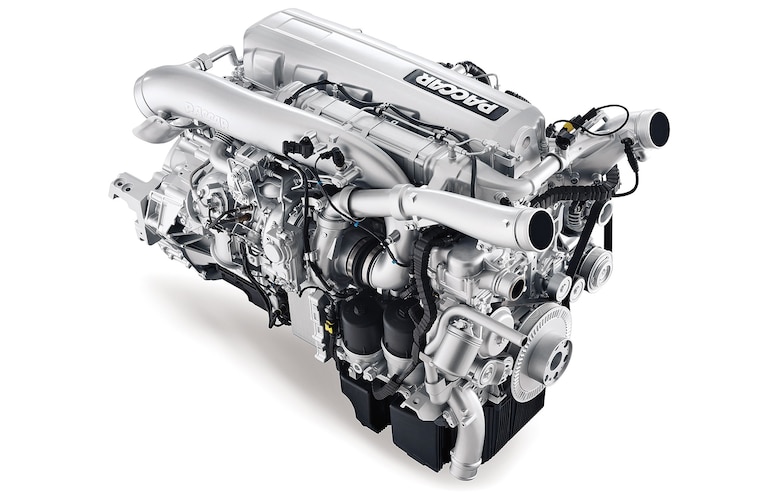 The 12.9L Paccar MX-13 diesel engine is built for large trucks such as the Peterbilt 579 semi and the Kenworth T880 heavy-hauler. It’s also tuned to deliver 500 hp at 1,425 rpm and 1,850 lb-ft of torque, which starts peaking at just 1,100 rpm. While the engine employs lots of modern tricks to meet strict U.S. and Euro VI emissions standards, it also uses some simple tried-and-true technology. Unlike lots of modern clean-diesel engines, it uses a traditional camshaft mounted inside the engine block with pushrod-operated overhead valves and a single variable-geometry turbocharger instead of a compound setup.
These components help save weight and reduce complexity, but the MX-13 also has plenty of high-tech features meant to maximize fuel efficiency, augment performance, and increase longevity while keeping emissions low. Both the head and block are made from compacted graphite iron (CGI) that’s stronger and lighter than conventional gray iron, and the valve cover is made from a lightweight composite. The high-pressure common-rail fuel system operates at more than 36,000 psi and uses two injection pumps with housings that are integrated into the block that fuel feed pipes built into the block and head. The oil sump has a large, 42-quart capacity, and the engine uses a full-flow main filter and a centrifugal bypass filter that allows service intervals of up to 60,000 miles. 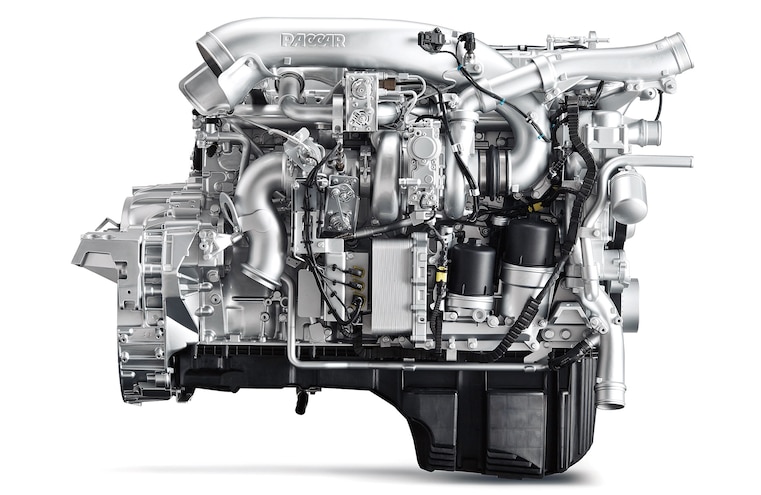 View Photo Gallery | 3 Photos
Photo 2/3   |   The Paccar MX-13 uses a single variable-geometry turbocharger setup that features actuators for the turbo and EGR mix along with a seventh injector mounted downstream from the exhaust turbine. The exhaust brake butterfly valve has its own actuator and is mounted in between the exhaust side of the turbo and the seventh injector that helps DPF performance. The oil filters, oil cooler, thermostat, valves, and tubing are integrated into a single module for ease of maintenance and the 42-quart capacity oil sump is made of a composite material and features ribs designed to reduce noise.
All the wiring for the engine is consolidated and fully encapsulated inside looms to protect it from rubbing due to vibrations and reduce the wear on connections. The engine also features a fan with dedicated power from the driveshaft, a single auxiliary drive belt made of Poly-V material, and automatic belt pre-tensioners. In addition to providing power and economy, the MX-13 is designed to run clean. The emissions system also includes a selective catalytic reduction (SCR) setup that injects urea into the exhaust stream and an electronically driven and monitored crankcase ventilation system.
Along with the clean diesel tech, the MX-13 also has a compression brake by Jacobs with three levels of stopping power, that’s designed to be quiet while integrating with antilock braking systems for maximum driver control. The combination of new and old tech helps the MX-13 meet modern emissions requirements while delivering a steady supply of 500 hp and 1,850 lb-ft of torque at less than 1,500 rpm. 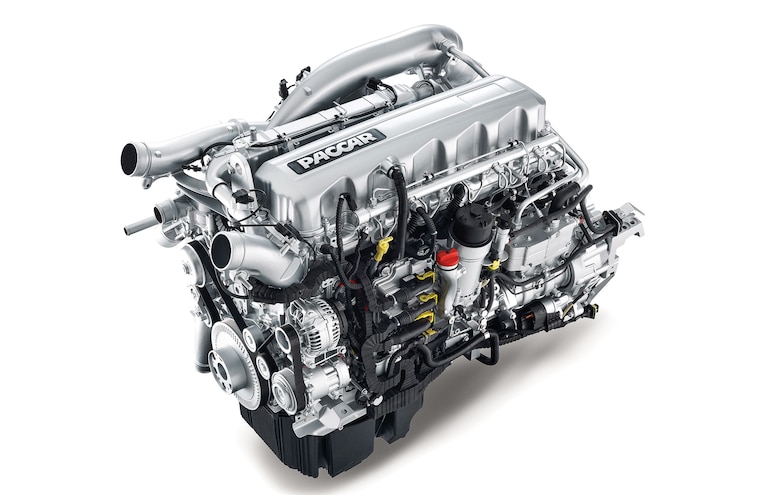