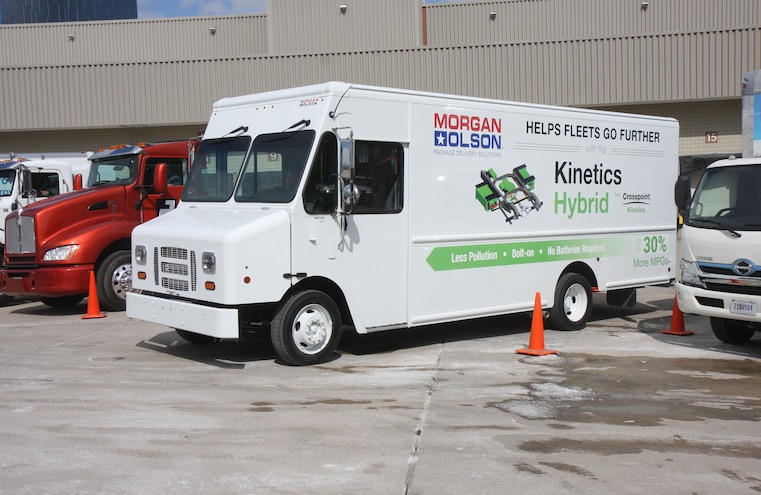 The 2015 Work Truck Show in Indianapolis is the nation’s largest convention of work truck manufacturers and equipment suppliers so, naturally, it’s the perfect place for companies to show off their greatest technologies. With a significant emphasis placed on “green trucks,” much of that technology was focused on reducing fuel consumption and emissions, while providing lower operating costs and simpler fleet integration to those brave early adopters.
Proving they knew how to put their money where their mouths were, several different companies offered testdrives and rides to allow attendees to experience their cutting-edge technology firsthand. We were invited to drive three Ford F-59 box vans, each powered by a different propulsion system.
Crosspoint Kinetics: Ford F-59 Gas-Electric Hybrid
Crosspoint Kinetics’ solution to the energy problem is a bolt-on, after-transmission electric hybrid system that uses compact ultracapacitors in place of batteries for energy storage. As with most hybrid electric vehicles, the Crosspoint F-59 uses regenerative braking to build a reserve of potential energy. However, the system only works from 30 mph to 0, with electric boost then moving from the ultracapacitors to the rear wheels as the vehicle accelerates to that 30-mph threshold. At that point, the vehicle moves on its primary fuel source (gasoline, diesel, compressed natural gas, or propane) alone.

View Photo Gallery | 6 Photos
Photo 2/6   |   Using a somewhat conventional gas-electric hybrid system, the Crosspoint Kinetics Ford F-59 relies on ultracapacitors—not batteries—to store energy. That important switch is what makes the conversion relatively simple and cheap. An engine stop-start system further reduces emissions and fuel consumption, particularly in urban driving.
While the hybrid system may sound a bit underwhelming compared to other electric tours de force, there are a number of benefits, including lower initial cost and more reliable operation. Additionally, most box vans spend the majority of their time decelerating from and accelerating to 30 mph, so Crosspoint’s system is well suited to the application. The company claims efficiency increases of 30 percent in normal fleet van driving, with a commensurate decrease in greenhouse gas emissions.
In practical use, it all worked seamlessly. Regenerative braking was unnoticeable, and the engine’s auto-stop was responsive when the light turned green. Aside from the initial surprise at the gas engine shutting down when stopped, the vehicle provided a driving experience similar to any other box van.
Roush CleanTech: Ford F-59 Propane
The propane-fueled Roush CleanTech Ford F-59 was the only non-hybrid we drove at the Work Truck Show. However, propane burns much cleaner than gasoline or diesel (with emissions between 20 and 100 percent less than its fossil-fuel competition), so its green cred shouldn’t be discounted. Other advantages to the fuel are significantly lower fuel costs (around half the price of gasoline at press time) and relatively simple conversion. 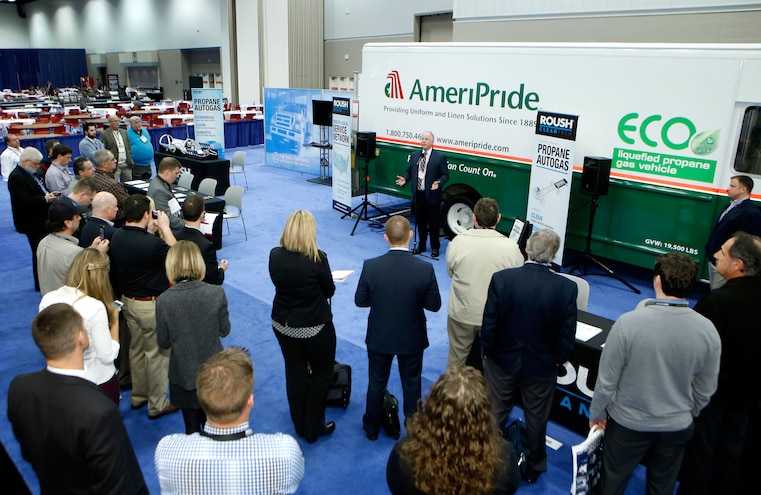 View Photo Gallery | 6 Photos
Photo 3/6   |   Roush CleanTech announced a partnership with AmeriPride, the linen supply company, which will now use propane-powered Roush trucks in its delivery fleet. Tucker Perkins, chief business development officer for the Propane Education and Research Council, advocates the use of propane thanks to its cleaner burn and domestic production compared to fossil fuels.
Additionally, Roush CleanTech recently achieved Qualified Vehicle Modifier status from the Ford Motor Company (a goal shared by the manufacturers of each of the vehicles we drove), so purchasing a brand-new, propane-powered Ford work truck is very simple.
There are a few disadvantages to propane, however, one being “range anxiety” that stems from limited refueling options. Most fleets that run propane install fueling tanks within the company’s motor pool, allowing them to refuel at the home base at the end of the day. Many trucks’ routes are within the range of a full tank, but still, anxiety will linger until propane is more widely available.
The driving experience of the Roush F-59 could not have been more conventional. Except for the van’s massive proportions, it was as simple to operate as any other vehicle. That driving feel was both a selling point and a negative: Fleet operators who expect a cantankerous science experiment are instead rewarded with the same dynamics as their current vans, but those who crave a little gee-whiz will be disappointed.
Lightning Hybrids: Ford F-59 Gas-Hydraulic Hybrid
It’s for that group of tech-happy early adopters that the Lightning Hybrids gasoline-hydraulic system is ideal. Hybrids’ solution uses hydraulic fluid instead of electricity to assist the primary power source. Once the operator touches the brake pedal, a driveshaft-mounted pump engages, moving the fluid from a low-pressure tank to a high-pressure tank. This creates drag, slowing the vehicle down without actually using the service brakes, if you’re careful. Then, upon acceleration, the high-pressure tank’s potential energy is released through the pump and power transfer unit as fluid moves back into the low-pressure tank. 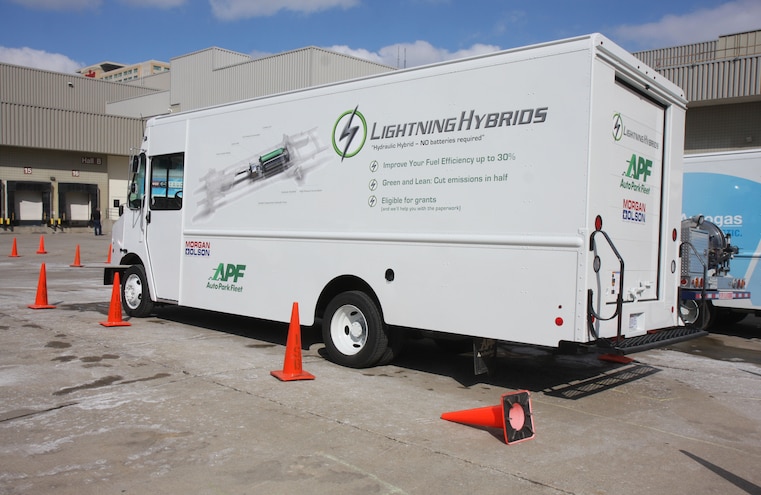 View Photo Gallery | 6 Photos
Photo 4/6   |   Lightning Hybrids Hydraulic Hybrid Ford F59 003
The company claims a break-even payback after just one month of normal operation based on fuel cost and brake savings, since it’s possible to gradually brake to a stop using just the hydraulic energy recovery system. As with Crosspoint’s hybrid, the hydraulic hybrid is really only effective at speeds less than 30 mph, but again, that’s the space where most delivery vans do their work. Decreased greenhouse gas emissions and better braking and acceleration come along for the ride.
Driving the Lightning Hybrids gas-hydraulic system felt a bit like driving Ms. Frizzle’s Magic School Bus. The hydraulic pump and power transfer unit whirred and hummed at low speeds, alternating between energy recovery and assist at every move of the right foot. (To be fair, the noises were likely exacerbated by our empty van’s echo-chamber cargo area.) Performance and braking felt notably better, although the regenerative-braking system was hard to modulate smoothly. Still, it was lots of fun! 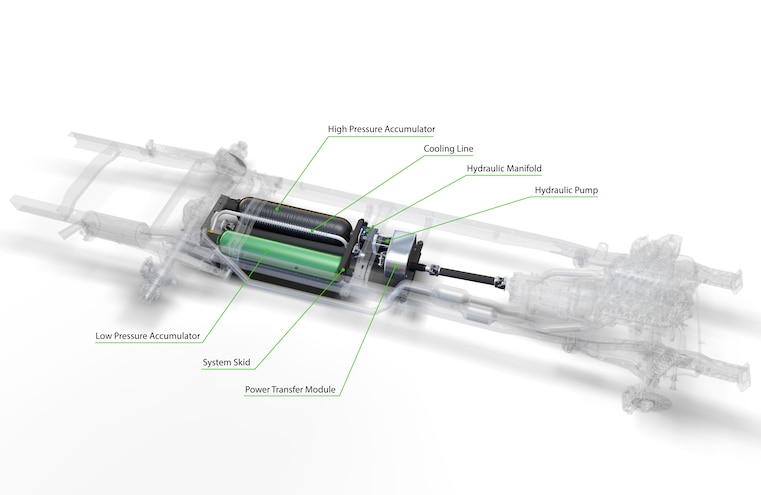 View Photo Gallery | 6 Photos
Photo 5/6   |   Since it runs on conventional fuels, the Lightning Hybrids hydraulic hybrid can be tanked up just about anywhere gas or diesel is available. However, its unique hybrid system lowers fuel consumption and extends service-brake life in stop-start environments, like those of most delivery trucks.
Motiv Power Systems: Electric Ford F-59 Chassis
Although a running vehicle wasn’t available to test, Motiv Power Systems took the opportunity to show off its all-electric Ford F-59 chassis. Removing the engine creates ample room for battery packs and electric motors, which can propel a chassis for about 80 miles. As with other electrics, charging can occur at off-peak times (like at night), resulting in even more operation savings. 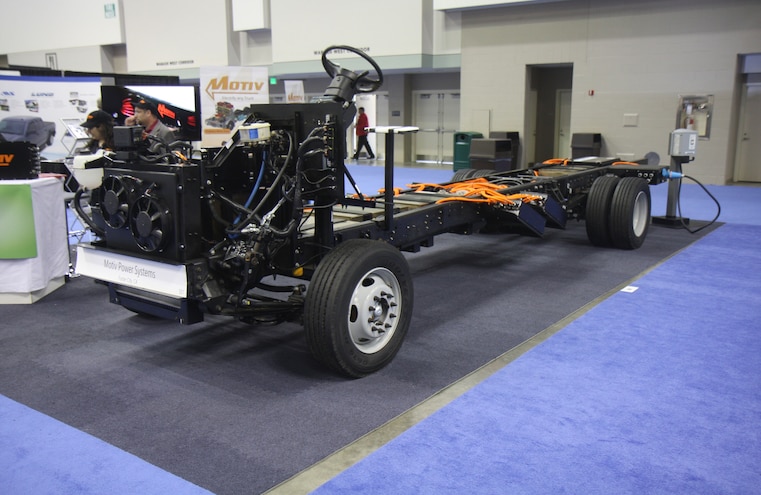 View Photo Gallery | 6 Photos
Photo 6/6   |   We’d love to have driven this all-electric take on the Ford F-59 by Motiv Power Systems. Using readily available batteries, motors, and chassis, the Motiv solution is less costly and easier to procure than other all-electric delivery-van options. Motiv CEO Jim
The company has received great feedback from the city of Chicago, which uses Motiv—um, shall we say—motivation for some of its sanitation trucks. This application is ideal for electrification, as a city route is typically well within the range of the electric system. Replacing a gas or diesel engine with electricity cuts down on neighborhood noise and noxious emissions as well, and that’s something anyone who’s been awoken at 7 a.m. by a smelly diesel garbage truck can appreciate.
The company has placed several vehicles into fleets, ranging from Ford E-450 buses to the aforementioned garbage trucks. Motiv says its product can be optimized for any chassis from Class 3 to Class 8, using custom battery solutions for each application. According to Motiv, the system pays for itself in three years compared to diesel, which is impressive given the long life span many fleet vehicles enjoy.