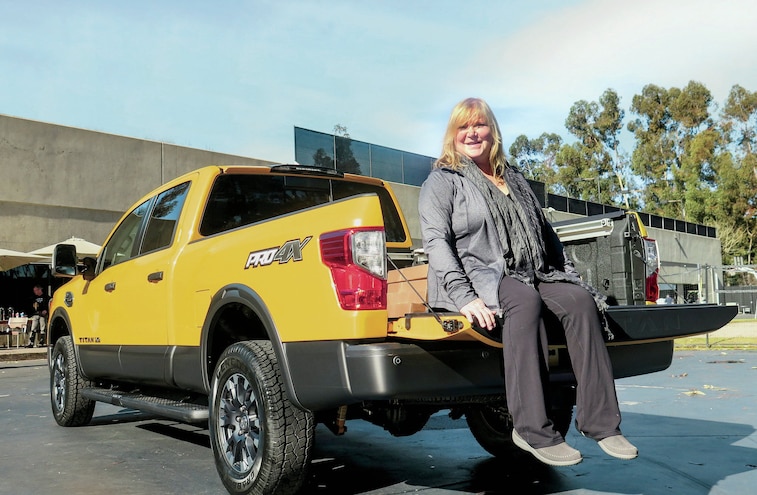 Diane Allen was born and raised in Detroit with a proverbial pencil in her hand. As a child, she says, “you could not stop me from drawing. I was constantly drawing. It wasn’t cars at that time, but always something.”

"An automotive guy saw my work and said, ‘You have to go into cars.'"

After graduating from high school in the Detroit suburb of Garden City, she went to Wayne State University in Detroit on a full academic scholarship, but didn’t stay long. “I was looking into product design,” she relates. “An automotive guy saw my work and said, ‘You have to go into cars.’ He literally picked up the phone and made an interview for me at College for Creative Studies.” 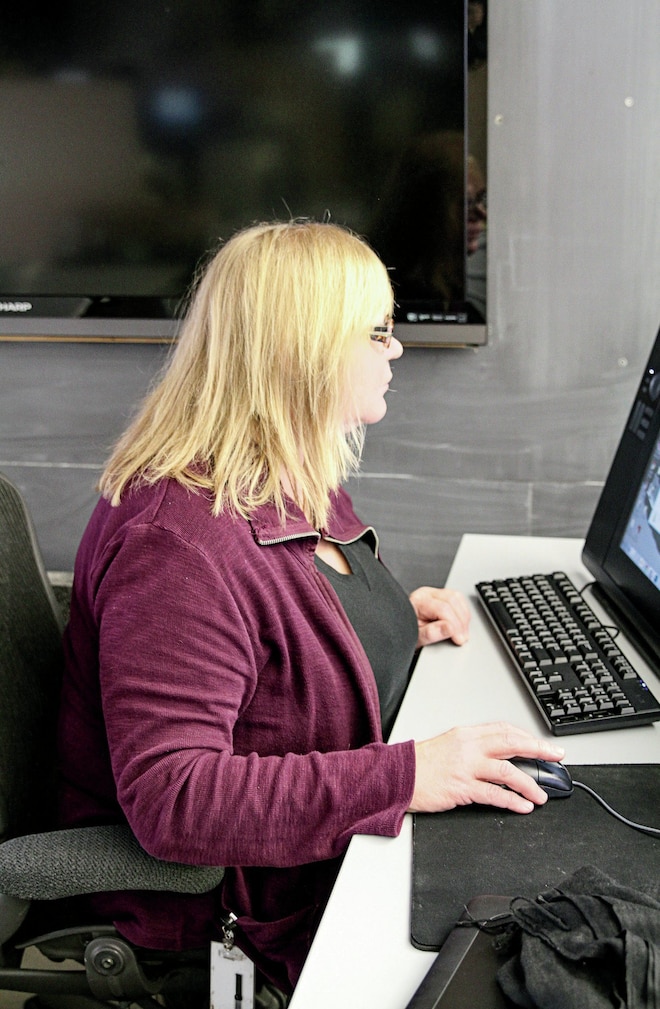 View Photo Gallery | 4 Photos
Photo 2/4   |   Diane Allen
Once at CCS, the respected design school in Detroit, she specialized in automotive design. Her first job out of school in 1984 was with Nissan Design in San Diego, which has much nicer weather than Detroit, and she’s been there ever since.
There were very few women in auto design at that time, especially in exteriors. Her first assignment was working on a small facelift on a sedan. Three decades later, she is senior design manager for Nissan’s all-new Titan pickup. We caught up with her for a chat, mostly about the new Titan, at the 2015 North American International Auto Show in her hometown of Detroit.
TT: What was your first leadership project?
DA: Facelifting the Frontier pickup, I think for ’99. It had the bolted-on fenders and big pads, so we called it the boxing glove. It wasn’t all new, so we had to keep the body, doors, and almost everything else the same. All I got was a new front clip, a tailgate, and some over-fenders. When we came up with that tough “lugnut” look, everyone was shocked. People thought it was a new truck, which was pretty satisfying. It was probably the most-loved truck in Brazil and still is.
Have you stayed with trucks since then?
I’ve been all over, including sports cars and sedans. I was senior design manager for the 350Z, the 370Z, the first Titan, the first Armada, the first Infiniti M, and the Rogue. The way we’re structured, we work on a whole range of products in different segments, which I think brings power to the product because you have the perspective of seeing other programs and working on the form language. Not many designers get to do Z cars, then big Titans. You really have to analyze what vehicle you’re working on and what you want to bring to the form language. 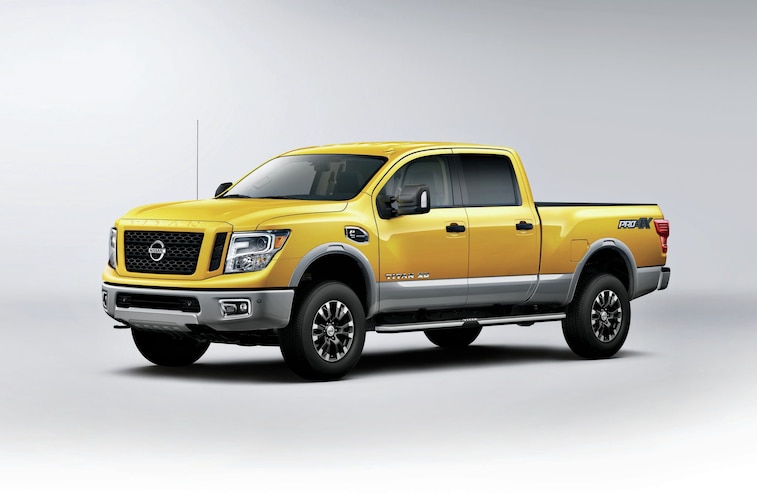 View Photo Gallery | 4 Photos
Photo 3/4   |   2016 Nissan Titan Xd
Do you go from studio to studio overseeing different products or focus on one at a time?
This program—because of all the cab and bed configurations, the standard Titan and the XD version, which is a completely different front clip—was so intense, it was my main project.
What was its biggest design challenge?
To capture fullsize, powerful, capable, but all Nissan, not like one of the competitors. We are Nissan, and we need to look uniquely Nissan. Beyond that, there were a million challenges: getting the cooling right with the grille texture design; the headlamp layout and performance. Everything was a puzzle. We just had to keep working on it, very closely with the engineers, and improving it.
Anything so difficult that you thought you would never get there?
Packaging that tow mirror. It has a puddle lamp on it, and a 360-degree camera. It has to telescope and to swing in for transport. The amount of engineering that went into that at first made it unattractive. It was a real feat to get all that function where it needed to be and make it look right.
A lot of work on aerodynamics and body-related elements of fuel efficiency?
We had to really work on aero, especially cooling for the big diesel engine. And those big mirrors were not aerodynamic enough, so we had to add curvature to them. The center high-mounted stop light at the back of the cab even has two little spoilers on it to help its aerodynamics. A lot of little details. It was a constant cat-and-mouse thing going back and forth. 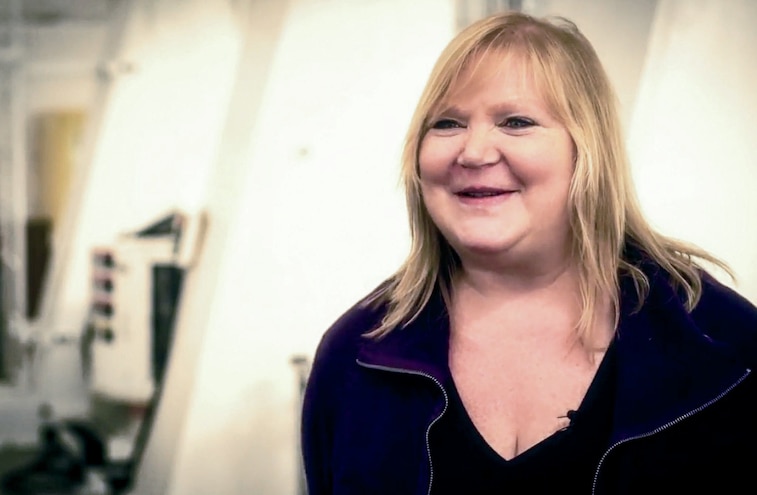 View Photo Gallery | 4 Photos
Photo 4/4   |   Diane Allen
Did you oversee the interior as well?
We had a special, very small interior team, and we worked on everything and integrated together with them. The outboard vents draw attention to the width of the instrument panel, and the form language is very tough. The Platinum Reserve, a new grade for us, looks very expensive, like tough money. It’s chocolate with quilted black leather up the center, inspired by a hunting jacket. We really wanted to capture premium but masculine.
What are you most proud of on this truck?
I would say the front face. I think it’s got a real mean stare. That grille with all that metal, the way everything fits together like a hardware puzzle. We were inspired by the concept of Titan as a warrior, so it kind of represents the mask of a gladiator. And the athletic stance with the wheel wells. The abdomen is barrel shaped, with the fenders diving down, kind of like a droid with life to it. We also did a new wheel for each grade, every one tough and tool-like. We didn’t want anything flowery.
Were you trying to out-tough, out-macho everyone else?
Just giving customers what they want: big, tough, and capable. We wanted to take it up a big step from the last generation, and to do that, we had to get that tough, capable, lots-of-metal look. We are really proud of the name Titan, so you see it on the top of the grille, on the back of the bed, in the base headlamp with the standard bulb, even on the cup holder in the back seat. And when you see this thing on the road, it has such liveliness about it. It’s really super dynamic.