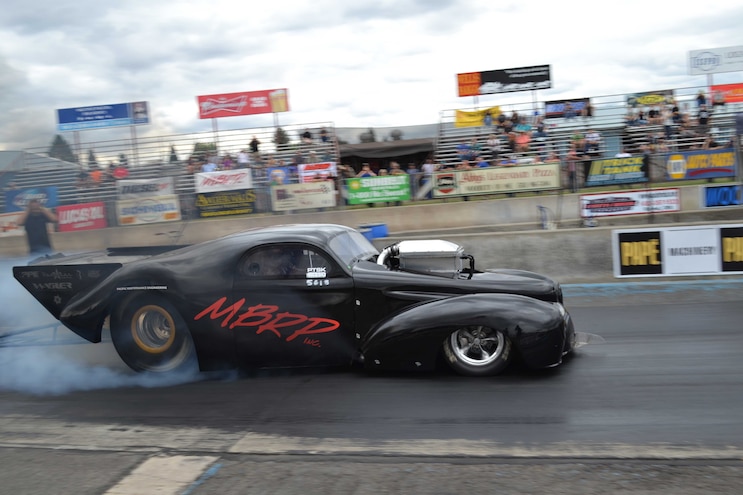 Nicknamed The Batmobile, Brad Makinen's '41 Willys Americar is perhaps the most notable diesel drag racing vehicle to hit the scene in quite some time. With its smoothed, stretched, and radically altered body, slammed stance, and extremely loud Duramax engine, it's a crowd favorite and instantly recognizable everywhere it goes. The Willys is also fast—very fast. Without truly leaning on the tune, Brad's car has run a best of 8.07 seconds at 173 mph in the quarter-mile, and there's still about 300 to 400 hp left on the table. So what makes this car tick? Brad was nice enough to let us know all about it. View Photo Gallery | 21 Photos
Photo 2/21   |   Part of the reason this car can sit so low is the Duramax engine uses a PPE dry-sump oiling system along with a Peterson Fluid Systems tank, which allows for superior oil control yet leaves plenty of ground clearance.
The first order of business when building the Willys involved making it extremely lightweight, which is why it has a Tommy Mauney chromoly chassis that's certified to 6.0 seconds in the quarter-mile and a body that's all fiberglass from Hairy Glass. The front suspension is also a lightweight strut design, and the brakes are carbon fiber. In the back of the car is the only piece that actually has some weight to it, as the massive Mark Williams 9-inch rearend needed to be able to handle a good 2,000 lb-ft of torque. Brad says the complete rolling chassis weighs around 1,200 pounds. 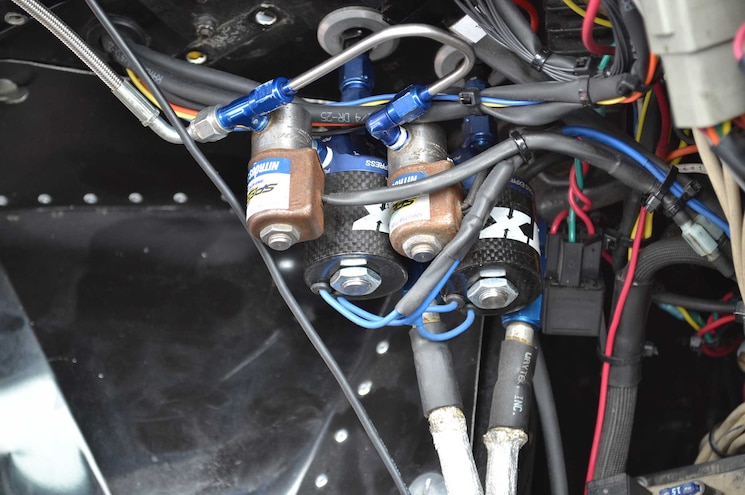 View Photo Gallery | 21 Photos
Photo 3/21   |   In addition to the massive intercooler, the Willys also has nitrous oxide for added cooling and power. So far, the team has only used four 0.022-inch jets, but twin 0.125-inch solenoids are there for when they want to turn the nitrous up.
Since Brad's past drag racing experience involves Duramax-powered trucks, the engine choice for the Willys is a no-brainer. The 6.6L V-8 is based on an LBZ block that has been quarter-filled for strength, and it has a factory crankshaft, Carrillo connecting rods, and Mahle pistons that were built to Brad's specifications. An experimental camshaft from Hamilton Cams bumps a set of pushrods from Trick Flow Specialties, and the cylinder heads are CNC-ported pieces from Wagler Competition Products, secured to the block with top-of-the-line ARP 625 head studs.
While a stout Duramax long-block is nothing to sniff at, the induction and fuel systems are where things really get interesting with this wild ride. Instead of running a single, or compound turbochargers, Brad built a set of parallel twin turbos, mounting 64.5mm Garrett GTW3884Rs on each bank of the V-8. The turbos are kept at a reasonable 47 to 50 psi of boost, thanks to massive 60mm Turbosmart external wastegates that were incorporated into custom headers built at Brad's shop, G&J Diesel in Billings, Montana. On the compressor side of this radical setup, pressure from the twin Garretts moves through an extremely efficient Wagler Competition Products air-to-water intercooler, and into the engine.
For fuel control, Brad ditched the stock ECM and wiring completely and went with the infinitely tunable Bosch Motorsports ECU, which is designed for all-out racing applications. The Bosch ECU works in conjunction with twin CP3 pumps from Exergy Engineering and enormous racing injectors from Dynomite Diesel Performance. With tuning from Hardway Performance, the Willys leaves the starting line at 3,200 rpm and accelerates all the way through its 5,750-rpm redline. 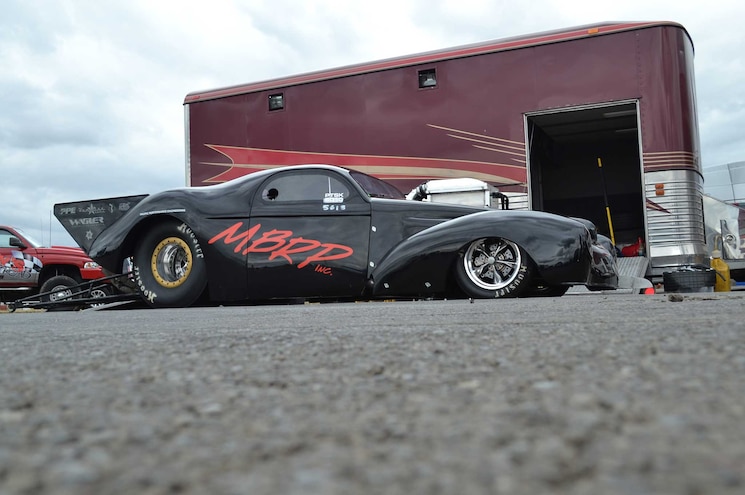 View Photo Gallery | 21 Photos
Photo 7/21   |   1941 Willys Americar Pro Modified 1941 Willys Americar Pro Modified Low Side
With a high-rpm engine and weight being a factor, Brad decided to replace the Allison 1000 six-speed automatic transmission normally found behind an '06-and-up Duramax with something lighter and stronger. This means standard drag racing fare, in the form of a three-speed Lenco manual transmission, mated to the engine with a Bruno's Automotive converter drive. A SunCoast Diesel Transmissions triple-disc lockup torque converter ensures all the power gets to the ground once the Willys heads down track. 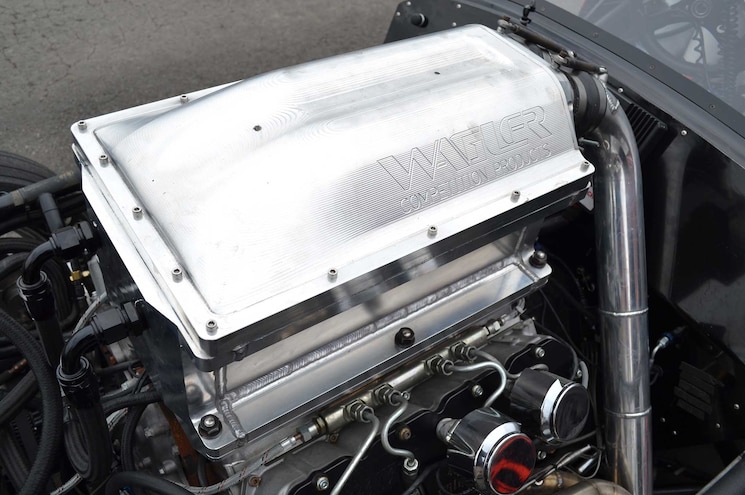 View Photo Gallery | 21 Photos
Photo 8/21   |   Atop the Duramax sits a massive air-to-water intercooler built by Wagler Competition Products. The 6061 aluminum intake uses CNC- and TIG-welded pieces throughout, is extremely efficient, and replaces the bulky and unsightly factory piping and Y-bridge.
The Willys performed admirably in its first season, progressing from initial 10-second shakedown runs into the low 8-second range (the car recorded a best elapsed time of 8.07 at 173 mph with Jarid Vollmer at the wheel, and it also ran 177 mph on a different pass, with Ryan Milliken driving).
One thing is definite: The Batmobile will continue to wow fans across the country.
Fast Facts
Year/Make/Model: '41 Willys Americar Pro Modified
Owner: Brad Makinen
Drivers: Ryan Milliken and Jarid Vollmer
Hometown: Billings, Montana 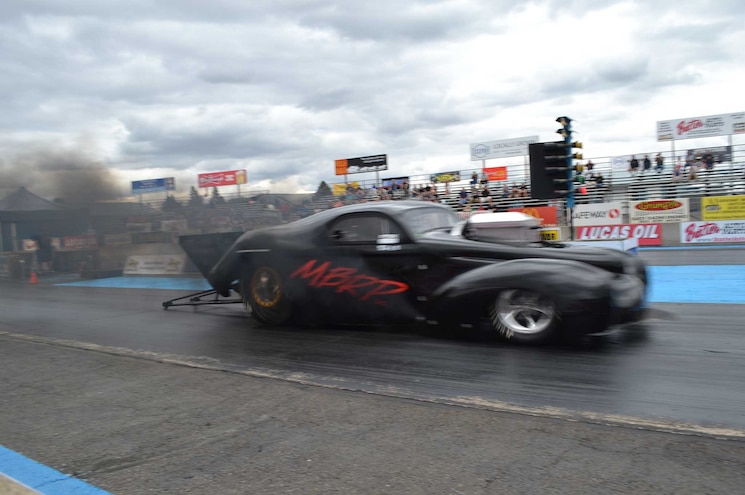 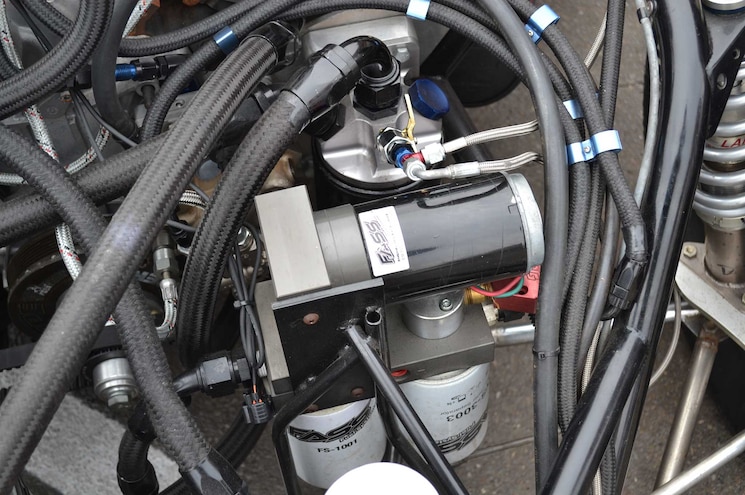 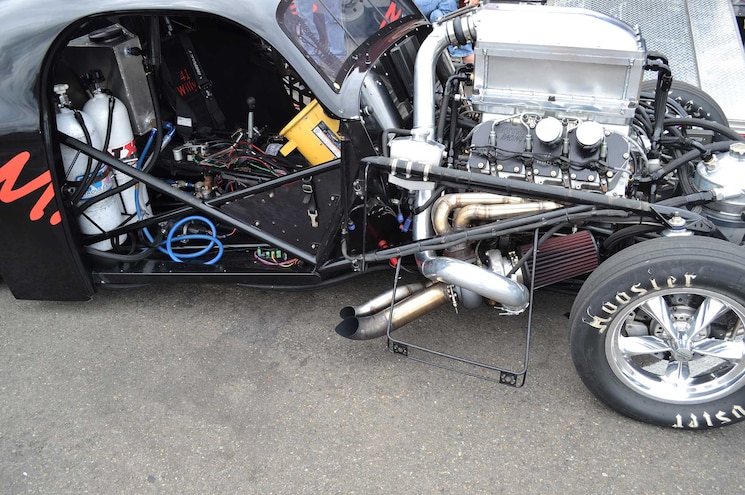 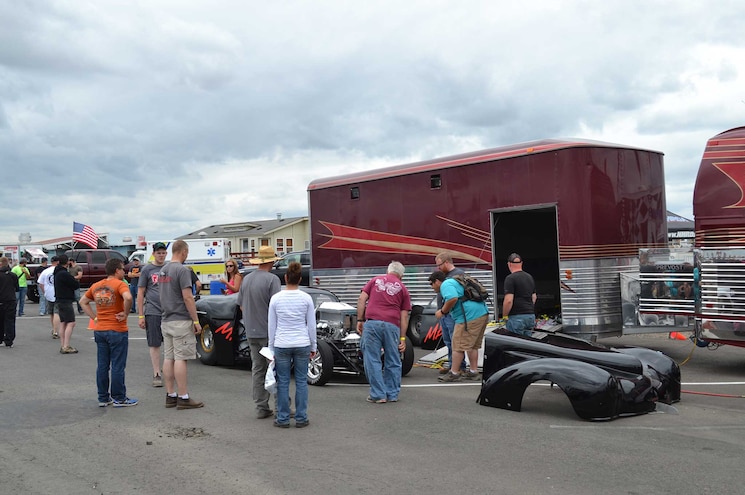