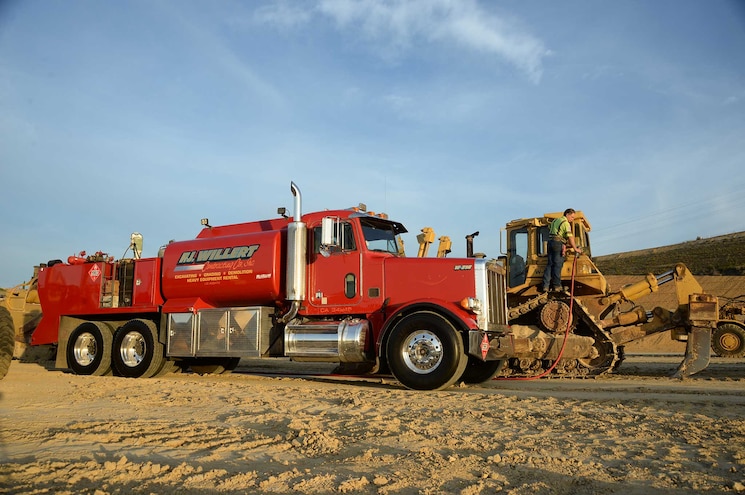 It's not unusual to run into a million-mile semitruck. What is uncommon is running into a clean Peterbilt with nearly 2 million miles on it. Add in the fact that this slick '95 Pete 378 is a real work truck that's used daily to service heavy equipment, and you've got an even more rare bird.
This Peterbilt 378 spent its first million miles as a traditional tractor. In 2003, F.J. Willert Contracting Company and Todd Lemke got ahold of it. The truck was rushed off to receive a few modifications and take on a second life. The wheelbase was extended to 275 inches with 10 5/8-inch by 5/16-inch-thick framerails. A McLellan Super Luber body was yanked from Todd's old '66 Peterbilt service truck, refurbished, and reinstalled on the '95 Pete. 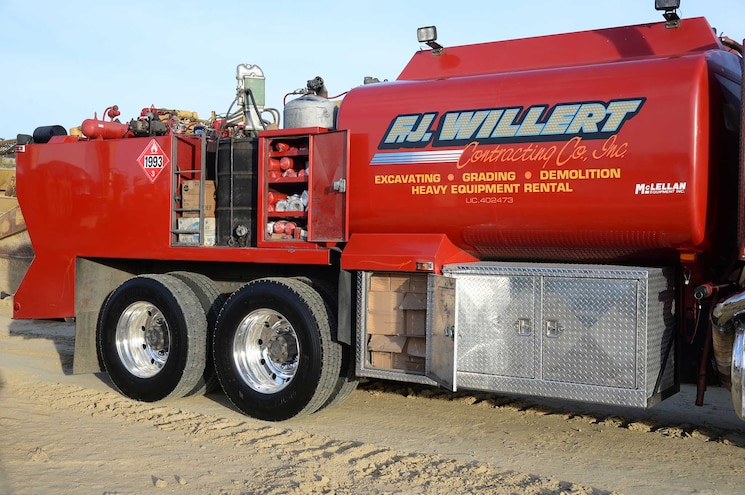 View Photo Gallery | 18 Photos
Photo 2/18   |   The massive fuel transfer tank carries 2,000 gallons of red-dye off-road diesel. There are many storage boxes on the truck that are filled with extra fuel, air, and oil filters for the equipment Todd services.
Under the hood of the 378 you'll find a Detroit Diesel 60 Series four-cycle inline-six diesel engine tuned to 430 hp and more than 1,400 lb-ft of torque. The engine is backed with a three-stage Jake Brake and an RT B-14710 10-speed manual transmission. Power is sent back to DS404 and RS404 40,000-pound rear axles with a 2.85:1 final drive ratio. Up front, you'll find a 17,000-pound beam axle. The engine is fueled via a 100-gallon polished aluminum fuel tank and also spins a hydraulic power-take-off (PTO) unit that runs everything on the service bed.
The McLellan Super Luber service bed features a 2,000-gallon diesel fuel tank, which Todd taps out regularly in one day, sometimes requiring an additional 500 gallons to fill the equipment he is working on. The hydraulically driven fuel pump is capable of squirting 65 gallons a minute, which would be an extremely fast fill-up for a traditional pickup. However, most of the heavy equipment Todd works on requires more than 300 gallons of fuel daily. Todd has a multitude of lube guns to choose from that deliver 14 gallons per minute at the back of the service bed. Each gun has its own hose reel and reservoir. This includes 100 gallons of antifreeze, 100 gallons of freshwater, 100 gallons of hydraulic fluid, 100 gallons of 10-weight oil, 200 gallons of 30-weight oil, 100 gallons of 90-weight oil, and a 55-gallon drum of grease. There is also a suction gun attached to a 100-gallon recovery tank for extra-fast oil changes and a pressure washer to clean up any messes. All product pumps are hydraulically driven by the PTO, except for the grease gun, which is air-driven. The PTO also powers a hydraulically driven air compressor capable of producing an unbelievable 45 cfm at 100 psi. That's the kind of insane volume you need to fill some of those larger equipment tires in a timely manner. Work lights mounted to the top of the service bed provide 360-degree lighting for early mornings and late nights. 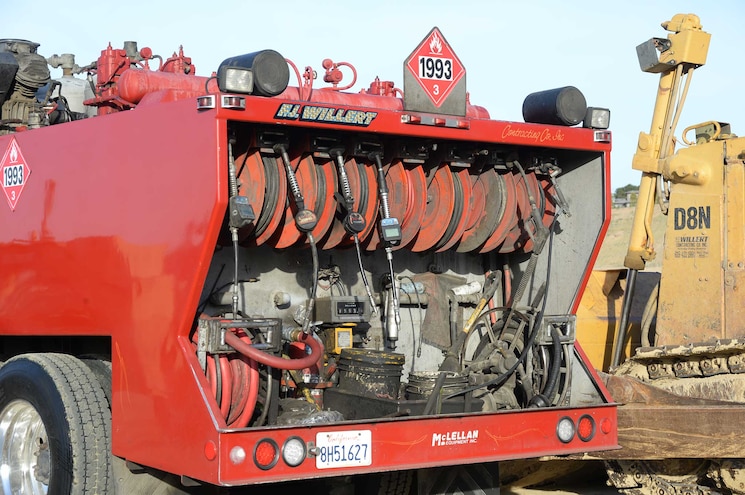 View Photo Gallery | 18 Photos
Photo 6/18   |   The hose reels at the back of the McLellan Super Luber service body include fuel, engine oils, antifreeze, gear oil, hydraulic oil, and grease. Digital meters can be set to stop the flow at a given amount. There's even a suction gun and a pressure washer to keep things clean. A keen eye will spot the wakeboard boat speakers.
Of course, Todd couldn't leave well enough alone, so he had Scott Cairncross at La Jolla Audio go full-tilt with a $7,200 interior/outdoor stereo system. Scott installed a Sony MP80 head unit in the cab with a wired remote at the rear of the service body to control all the stereo functions. Todd can listen to his favorite tunes at work via the weatherproof Mako boat tower speaker enclosures mounted on top of the service bed at the rear of the truck. The cab is stuffed with a Sony XM tuner, a Kicker ZX700.5 amplifier, MB Quart speakers, and an Alpine SPR-136A component speaker system. Between the two front seats you'll find a custom carbon-fiber center console that houses a 12-inch Eclipse subwoofer. 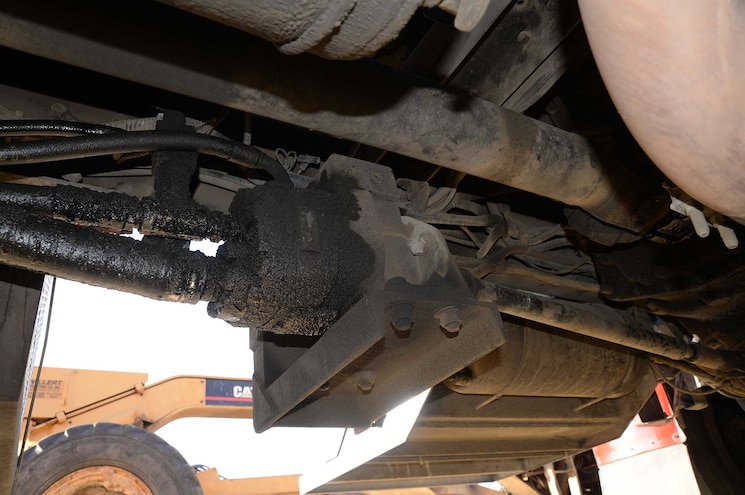 View Photo Gallery | 18 Photos
Photo 7/18   |   This is where the work gets done. A small driveshaft spins from the engine into this PTO pump, which provides hydraulic pressure to all the service equipment on the McLellan Super Luber body.
The entire truck and service bed were hosed in bright red, and real gold leaf was used on the F.J. Willert logo. Todd cleans and polishes the truck regularly, but it's getting long in the tooth. The Peterbilt 378 has more than 1.7 million miles on it after 12 years with Todd. Todd has a brand-new service truck on order that he should be behind the wheel of by the time you read this. We'll try and catch up with him for a closer look at the new truck. 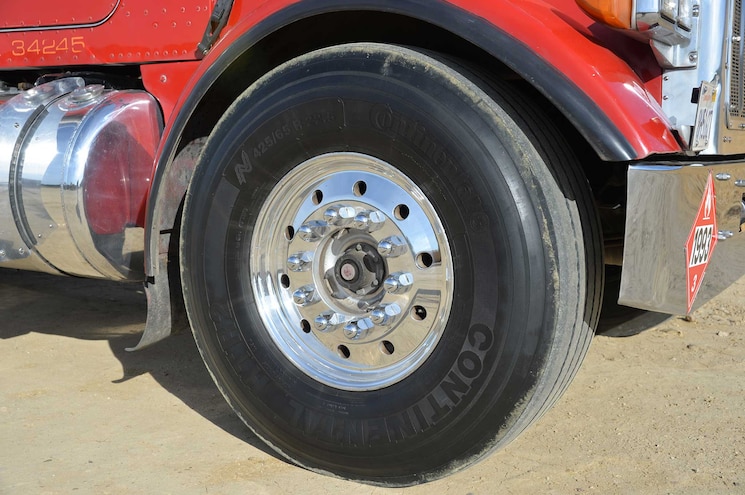 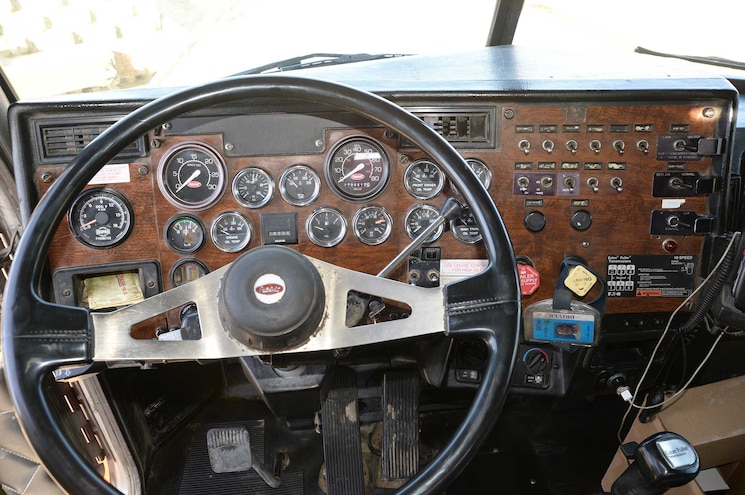 View Photo Gallery | 18 Photos
Photo 15/18   |   Todd can monitor the performance and condition of the truck via the many gauges in the dash. The stereo bits are hidden and tucked away here and there in the interior.

- OF
By John Cappa
15 Articles