In less than one year, Daniel Pierce of Big Spring, Texas, transformed this '03 Ram 2500 from a high-mileage daily driver into low-9-second head-turner. The pickup had 350,000 miles on the odometer when Daniel bought it, and he says it was capable of running mid-10-second quarter-miles when it was still his commuter vehicle. Then, in the summer of 2014, Daniel decided to tear the truck down to the frame and turn it into a dedicated drag racer. Just a few months later, the Baby Blue Ram made a splash at the 2015 NHRDA Spring Diesel Nationals with a quick 9.220-second quarter-mile run with a fast trap speed of 152.68 mph. Daniel says, "This is definitely one of those setups that can be built on a budget," and here's how it came together. 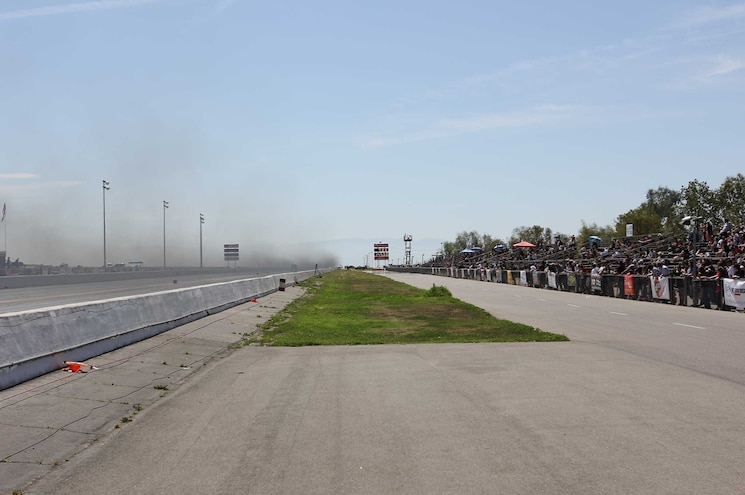 View Photo Gallery | 24 Photos
Photo 2/24   |   002 2003 Dodge Ram 2500 Diesel 9 Second Quarter Mile Scoreboard
350,000-Mile Engine Build
With the body off the truck, Daniel performed an "in-frame" rebuild, pushing each cylinder up individually and replacing the rods with parts from a Cummins 12-valve engine. Although 350,000 miles already showed on the clock by the time Daniel took ownership, the pistons and rings had been replaced (at "just" 175,000 miles), so he decided to use them again. A new head, built by Joker Fabrication, uses a Hamilton Cams pushrod and spring kit and is held firmly in place with ARP 425 head studs.
Professional Programming
Programming for the truck's '06 Ram ECM (electronic control module) is handled by the one-and-only Ryan Milliken of Hardway Performance, whose custom EFILive calibrations control a wild combination of air, fuel, and lots of nitrous oxide to produce an estimated 1,500 hp.

View Photo Gallery | 24 Photos
Photo 7/24   |   Daniel Pierce put racers on notice when he tore down the track in just 9.635 seconds at 144.55 mph during qualifying rounds at the 2015 NHRDA Spring Diesel Nationals. He followed that up with a blazing-fast 9.220 seconds at 152.68 mph to win the Super Street Class.
Turbo, Nitrous, and Exhaust
Air is squeezed with a single gigantic Garrett GT5518R turbocharger with an 88mm compressor wheel. A two-stage Nitrous Express nitrous-oxide system helps the turbo spool with 0.076- and 0.126-inch jets mounted in the cool-side boost tube of the aluminum air-to-air intercooler. Spent gases travel through a Steed Speed manifold before entering the 118mm turbine and exiting through a 5-inch exhaust and an Old Skool Fabrication carbon-fiber miter-cut-style stack in the bed.
Transmission and Running Gear
Backing the engine is a torque converter from Diesel Performance Converters hooked to a full-billet 47RE automatic four-speed transmission with a manual valvebody built by SunCoast Diesel Transmissions. Sticking with the low-budget theme, the front and rear axles of the four-wheel-drive Ram are factory stock, except for a Detroit Locker in the rear differential. Adjustable Rancho RS9000 XL shocks and CalTracs rear traction bars allow Daniel to dial-in the suspension for the dragstrip. The pickup's traction is enhanced by 14-inch-wide M&H slick tires mounted on 16x12 American Eagle wheels, which surround brakes from a stock third-generation Ram.

View Photo Gallery | 24 Photos
Photo 12/24   |   Back in the pits, it was easy to tell the source of the dark black gossamer in the air; fibers of carbon released when the Ram's exhaust tip exploded. It was a small price to pay for his decisive victory.
Racing Gear
To make the daily driver a bona fide race truck, Daniel stripped the interior and added a 10-point chromoly rollcage, Kirkey race seat, G-Force Pro Series harness, Precision Performance Products shifter, and Auto Meter gauges. There's also a fused switch panel with dedicated controls for the fuel, ignition, fan, lights, and such, and a race steering wheel with buttons to activate the nitrous oxide.

View Photo Gallery | 24 Photos
Photo 14/24   |   Traction for the Ram is provided by wide 14.0/33.3-16 M&H Racemaster Cheater Slick tires mounted on 16x12 American Eagle wheels.
Performance
Although it took less than a year for Daniel to transform his 350,000-mile daily driver into a full-time drag truck, he proved it was time well spent at Famoso Raceway during the 2015 NHRDA Spring Diesel Nationals. Along with snapping off the fastest qualifying run for the Super Street Class with 9.635 seconds at 144.55 mph, he shocked the crowd with a blazing-fast pass of 9.220 seconds at 152.68 mph in the final round. That winning run was the fastest of the entire event, and it left scorched fibers of carbon falling from the sky, when the exhaust tip exploded about 50 feet from the starting line. Daniel had a big smile while showing off his event-winning timeslip, and his First Place run is proof you can still build a competitive diesel truck without breaking the bank.

View Photo Gallery | 24 Photos
Photo 24/24   |   Trophies are nice, but Daniel is more proud to show off the timeslip he earned with the race truck he built on a tight budget.