With 1,400 hp at the Rear Tires, Randy Reyes' Deceptive Dualie is Right at Home in the Fast Lane

Owning a diesel truck came naturally to Randy Reyes. Because he owns a transmission shop in Grantsville, Utah—a business that involves moving big, heavy hunks of metal around on a daily basis—Randy figured an '06 Dodge Ram 3500 dualie would be the perfect truck for hauling torque converters, transmission cases, and miscellaneous parts. 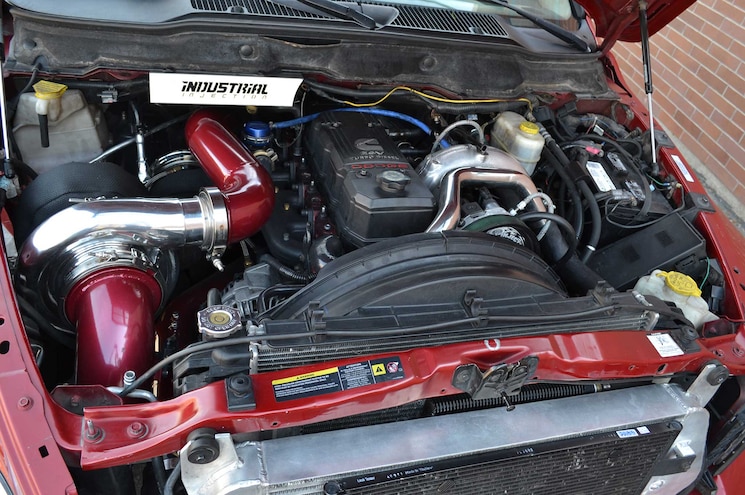 View Photo Gallery | 23 Photos
Photo 2/23   |   Although it looks plain on the outside, the engine bay of Randy Reyes' '06 Dodge Ram 3500 is home to nearly 1,400 rwhp worth of Industrial Injection race engine. The 6.7L Cummins was built with all the best parts and is quite a bit larger than the 5.9L that originally came in the truck.
Since Randy is the type of fellow who can't leave anything stock, shortly after buying the Dodge, he gave it a number of basic performance upgrades. Then Randy got a little carried away and, before he knew it, there was a full-blown 6.7L Industrial Injection race engine in place of the original 5.9L Cummins, coupled to a 48RE four-speed automatic transmission that was built with the most exotic parts in the business. Don't let the tame looks fool you, Randy's truck is a monster.
The build involved a nice displacement bump in the form of a 6.7L short-block built by Industrial Injection out of Salt Lake City, Utah. Although the 6.7L houses a stock crankshaft that's secured by a girdle and ARP studs, virtually every other part of the engine is from the aftermarket. The connecting rods in this type of powerplant take a huge amount of stress, so Carrillo rods were installed, along with a set of fly-cut and coated pistons. The engine also features an aftermarket camshaft, along with a set of Industrial's extreme-duty pushrods, which are designed for high horsepower and high rpm. The cylinder head was also cut and fire-ringed and fitted with Industrial Injection's valvesprings.
While a stout long-block is key in any performance build, Randy still needed the pieces to make power, and in this area he was anything but conservative. Relying on the 6.7L's displacement to spool a big turbocharger setup, Randy went with a set of 75mm and 93mm compound turbos and an Industrial Injection intercooler, which is punished with up to 100 pounds per square inch of boost from the mammoth compressors.
The Ram's fuel system is equally impressive, with Industrial Injection injectors, 120-percent-over stroker CP3 pumps, and a FASS Titanium Series 150-gph lift pump providing fuel from the tank. Needless to say, an off-the-shelf tune will not support such a wild combination, so Randy had Starlight Diesel custom-tune the truck with EFILive.

View Photo Gallery | 23 Photos
Photo 6/23   |   The smaller of the two turbochargers started life as a BorgWarner S400 frame 75mm unit. While it is rather large for a small turbo, the extra displacement from the 6.7L engine helps it spool up.
Since Randy is a transmission guy, he built the Dodge's 48RE automatic transmission with the best parts he could find, from a variety of manufacturers. The front of the transmission starts off with a triple-disc SunCoast torque converter that's mated to an oversized input shaft. The intermediate shaft is an aermet shaft from TCS, and the output shaft is an oversized 300M piece. Randy's self-built valvebody handles shifting duties. The clutch packs are interesting; Randy uses machined plates that he designed, which allow additional Alto Red clutches to be squeezed into the transmission.
With such a killer engine and transmission combination, you might expect the rest of the truck to be similarly upgraded, but it's actually fairly mild. Randy says he's plenty hard on the drivetrain, and so far the only breakage has been the front driveline on a hard four-wheel-drive launch. The 3.73:1-geared AAM rear end is stock and has survived racing, towing, and sled pulling just fine.
1,401 hp and 10-Second Elapsed Times!
At Industrial Injection's 2015 Dyno Day, Randy's '06 Dodge Ram 3500 laid down 1,169 rwhp with ease, but he still wasn't satisfied. After a bunch of blown and torn intercooler boots (thanks to 100-psi boost pressures), Randy went on an all-out airflow attack, installing a fully ported race cylinder head from Industrial Injection and side draft intake and upgrading the turbochargers to a BorgWarner S480 over an S598. With the addition of some Cobra 55 injectors, Randy's truck now makes an incredible 1,401 hp at the rear wheels with a more efficient 85 psi of boost—and it clicked off an incredible 10.55 seconds at 130 mph.
While all these numbers sound impressive, Randy's Dodge also backs up its power at the track, where the 8,300-pound truck has run an 11.1-second e.t. with a lackluster 2.1-second 60-foot time. Randy says he's done with his truck (for now). He still drives the Dodge every day and reports that it can "get up to 160 mph pretty darn quickly" if he needs it to. With such impressive performances for a street truck, we have to say it...Diesel Power Challenge? Randy's sleeper Ram would get our vote!

View Photo Gallery | 23 Photos
Photo 11/23   |   One of the most unique aspects of the Ram's engine is its turbocharger arrangement, which is quite a bit different than a normal over/under setup. In order to fit two large-frame turbos under the hood, the high-pressure unit was turned around, with the inlet facing the firewall. The hot pipe from the small turbo makes a bend and mounts the enormous atmospheric turbo at the front of the engine bay. Both 'chargers combine to produce nearly 100 psi of boost.

View Photo Gallery | 23 Photos
Photo 19/23   |   A huge 93mm S500 frame turbo occupies the space where one of the batteries used to be, as well as most of the passenger side of the engine bay. The monster turbocharger is capable of flowing enough air to support 1,500 hp and keeps power climbing right up to the engine's 4,500 rpm redline.

View Photo Gallery | 23 Photos
Photo 23/23   |   Sealing the cylinder head to the engine block is very important in a performance application, and Randy spared no expense on his engine. The Industrial Injection head has been fire-ringed and secured with ARP 625 head studs to keep head gasket problems to a minimum.