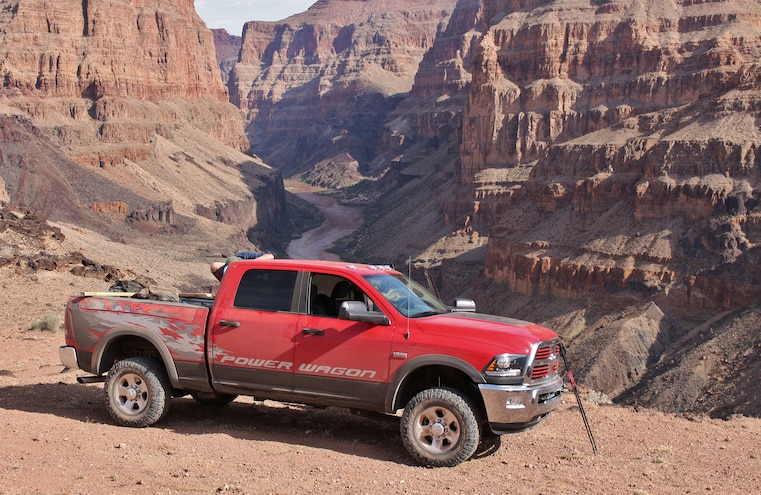 There are four-wheel-drive enthusiasts who will choose take on the challenge of this grueling trail. It’s an exciting adventure and one that 99.9 percent of the population will never make. Called Kelly Point, the road that gets you there is a real stretch when it comes to using Webster’s definition of the word “road” because for sure they didn’t have anything like this in mind. Twenty-five miles in and 25 miles back out, Kelly Point Road is a rock crawl; a lunar landscape strewn with boulders from beginning to end. The road abruptly ends at the edge of the Grand Canyon at an overlook of an inner canyon called Separation Canyon. The canyon gets its name from the three men who separated from John Wesley Powell’s nine-month 1869 expedition by boat down the Colorado River through the Grand Canyon. The three were never to be seen again. The irony is that one day later Powell’s boats would exit the Grand Canyon and be home free. 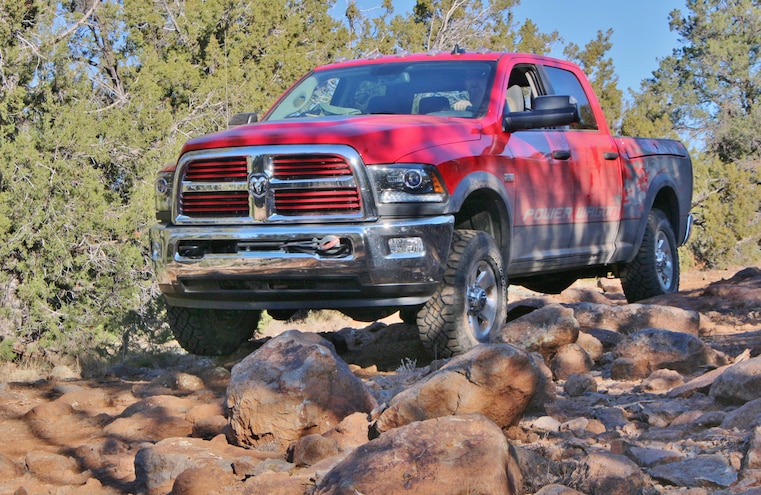 View Photo Gallery | 40 Photos
Photo 2/40   |   2014 Ram Power Wagon On Kelly Point Road
This four-wheel-drive adventure begins after crossing Horse Meadows, a few miles past the Mount Dellenbaugh turnoff. At the far end of Horse Meadows is the historic old Waring Ranch, where the really tortuous stretch of Kelly Point Road begins. This starting point is reached only after traveling a hundred miles over a primitive road system that begins in and leads south out of St. George, Utah. The humongous piece of real estate that needs to be crossed to reach the start of Kelly Point Road is called the Arizona Strip, millions of acres of breathlessly beautiful but totally empty badlands that drop off into the North Rim of the Grand Canyon. The Arizona Strip holds unbelievable opportunities for the off-road enthusiast who wants a challenging backcountry adventure. 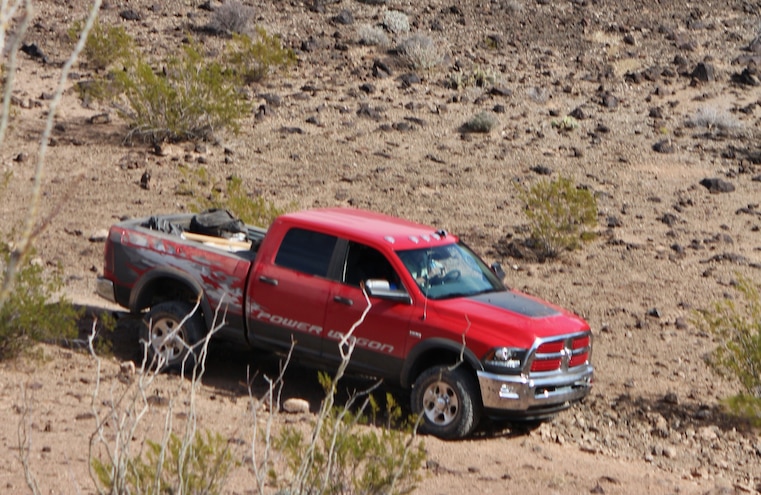 View Photo Gallery | 40 Photos
Photo 3/40   |   Trail Head Hike Down To Colorado River
Venturing out onto the Strip means going totally off-the-grid, where everything including water, extra fuel, provisions, and shelter must be carried in bulk, for there are no services whatsoever (repeat, no services whatsoever) out here, including cellular coverage. Tires (multi-ply with gripping rubber lugs) that are in top condition, two spares (recommended), and a high-clearance four-wheel-drive vehicle with protective skid plates are the bare-minimum equipment requirements for those who take this puppy on. 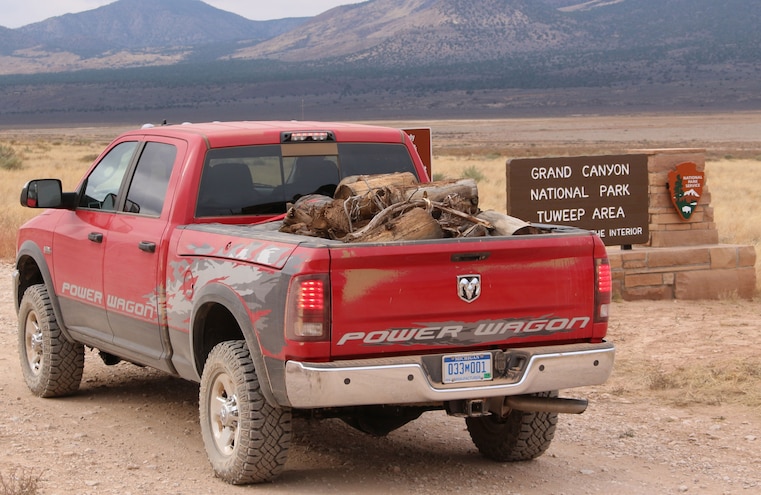 View Photo Gallery | 40 Photos
Photo 4/40   |   2014 Ram Power Wagon To Grand Canyon
One vehicle that can be driven right off the showroom floor and be good to go for an adventure such as this is the ’14 Ram 2500 Power Wagon. As its name implies, its pedigree is based on a history of rugged excellence—a truck with the kind of DNA that makes it a perfect fit for taking on Kelly Point Road. Using a Power Wagon, highway fuel economy came in at a respectable 20 mpg. Boulder crawling the last 25 miles out to Kelly Point and Grand Canyon overlook and the 25 miles back to the Waring Ranch, the average speed recorded was 5 mph and the fuel economy came in at 6 mpg. On several occasions, shards of rock had to be moved to create a pathway through the never-ending rock fields. We did this because when traveling so far off the grid over tortured terrain such as this, avoiding cutting a tire or two is of paramount concern. 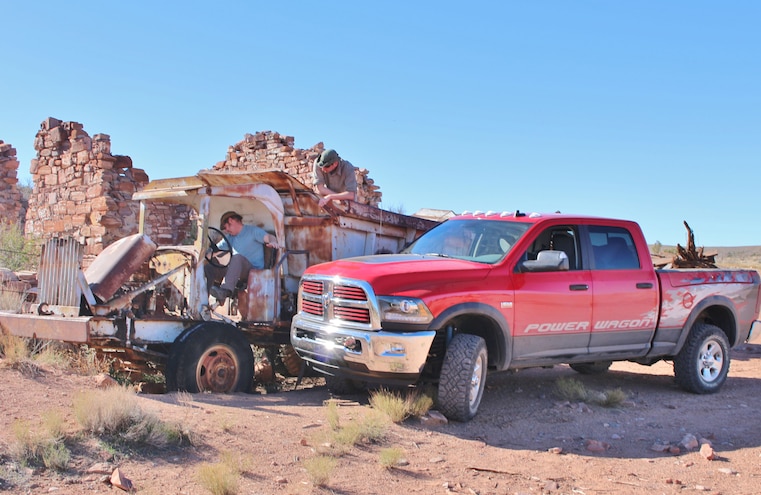 View Photo Gallery | 40 Photos
Photo 5/40   |   2014 Ram Power Wagon On Grand Gulch Mine Road
The Power Wagon’s factory-installed tires are 33-inch Goodyear Wrangler DuraTracs, and their performance was flawless. During this odyssey, tire issues were nonexistent, and the digital read-outs of tire pressures on a real-time basis remained a constant 60 psi throughout the journey. The total distance traveled across the Arizona Strip was just under 500 miles, which included side adventures before and after Kelly Point that by themselves merit a trip out on the Strip.
A stop along Kelly Point Road at the Historic Waring Ranch is mandatory, which has a rick cowboy history. Around 1920, Jonathan (Slim) Waring left Kingman, Arizona, on horseback, swam his steed across the Colorado River, worked his way on horseback up the inside of the North Rim of the Grand Canyon, and staked out several homesteads that eventually put the entire Kelly Point Plateau (50,000 acres) under his control. This tough old cuss was a staff sergeant in WWI, so it shouldn’t surprise anyone he had the grit to do all of this. In 1969, his widow sold the plateau to the National Forest Service. To this day, the Kelly Point Plateau Slim Waring once owned is managed by the Federal Government. The graves of Slim and his wife Mary are found beneath a stand of pines, a few hundred feet from the original ranch house, which is a registered historic site. Today, the Park Service watches over it. For the amateur photographer, the old ranch house, out buildings, and rough stock corrals present an awesome opportunity. 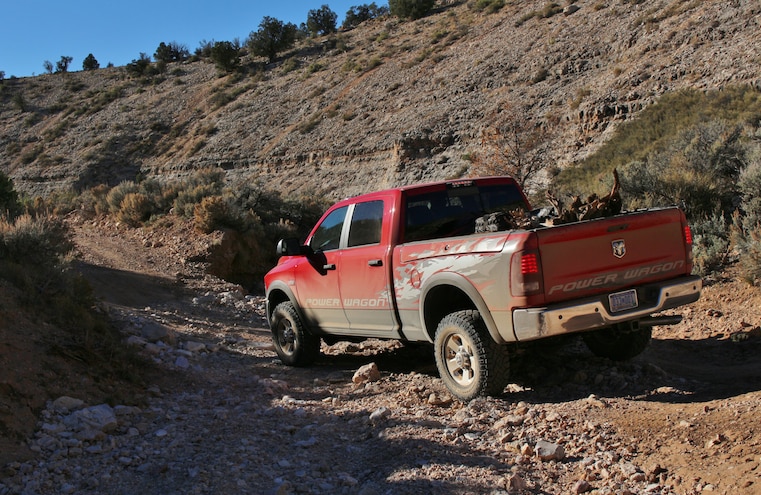 View Photo Gallery | 40 Photos
Photo 9/40   |   2014 Ram Power Wagon On Grand Gulch Mine Road
Heading south from Waring Ranch, just when you begin to think you must be getting close to Kelly Point and the rim of the Grand Canyon, take a deep breath and accept the fact that you’ve still got a long way to go. The going is slow, and with the round trip being about 50 miles, plan on spending a night along the trail.
You won’t be disappointed spending the night out here, for the plateau is nothing less than righteous. The heavens are painted ink black and splattered with billions of brilliant stars, where meteors smear the heavens, leaving in their wake a momentary trail of luminescence like a lightning bug that’s been squashed. The sound the wind makes as it breaks up over the rim of the canyon sounds like surf washing up on shore. With the road being so long and hard, an overnight respite in this virgin country is both smart and a perfect way to experience what Slim Waring saw every day and night of his life. You won’t be disappointed! 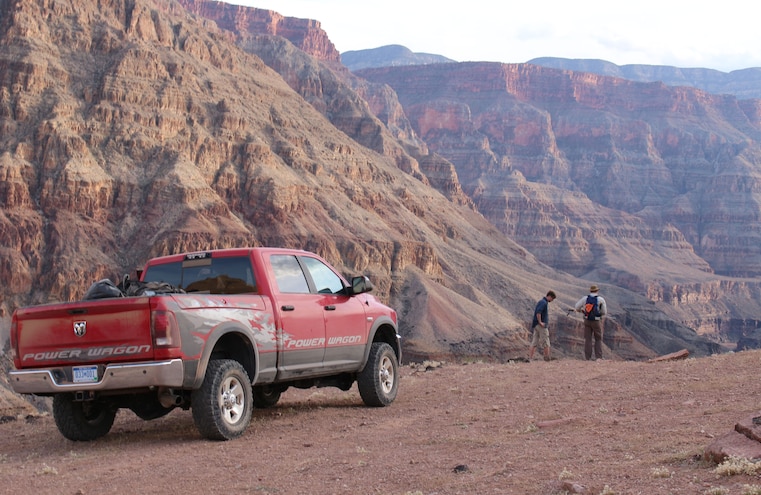