2015 Jeep Renegade Proves To Be A Real Jeep 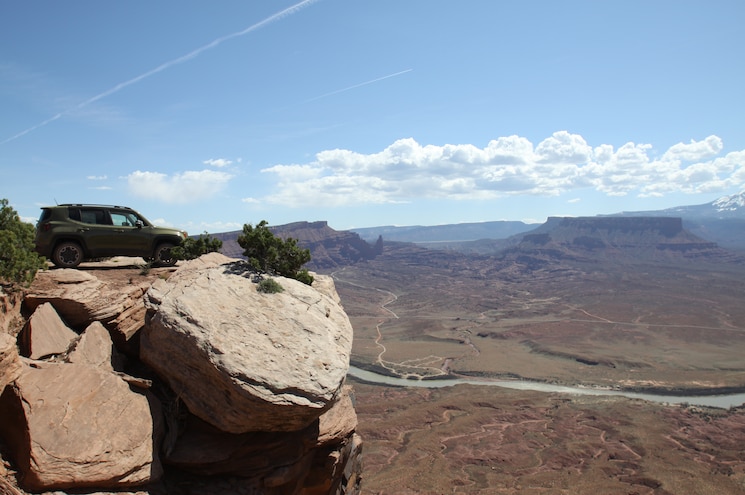 The Jeep brand prides itself on channeling the American spirit of fun, independence, and freedom. Whether it is with the capable and traditional Wrangler or the thoroughly reimagined modern Jeep, the Cherokee, Jeep is able to cater to the company's core while expanding the brand's reach to people who might have never considered a Jeep before.
A cornerstone of this growth strategy is the all-new Jeep Renegade. Close in size to the beloved Cherokee XJ, the Renegade uses familiar Jeep styling elements, such as large, round headlights, a seven-slot grille, and trapezoidal wheel openings. With friendly styling and a playful, almost puppy-like appearance, Jeep purists might have trouble taking the Renegade seriously.
However, don't let the looks fool you. The Renegade is a contemporary SUV, with a vault-like structure and an advanced traction control and all-wheel drive system. The Italian-made sport-ute may share a platform with the Fiat 500X, but the development was overseen by a qualified Jeep engineering and design team. The Renegade is by no means the byproduct of careless badge engineering.
To prove this, Jeep invited us on a full-line trail run in Moab, Utah. Consisting of Renegade and Cherokee Trailhawks, a Grand Cherokee testing a new wheel and tire package, and a couple of Wranglers, we headed out on the scenic 30-mile-plus Dome Plateau trail to see how well the Renegade could keep up with its siblings. 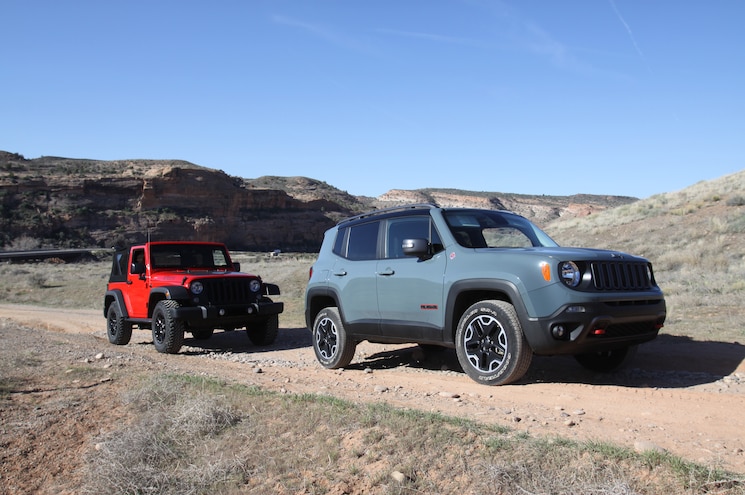 View Photo Gallery | 5 Photos
Photo 2/5   |   2015 Jeep Renegade And Cherokee In Moab Utah
Sporting a naturally aspirated 2.4L Tigershark inline-four engine, which generates 180 hp and 175 lb-ft of torque and is paired to a nine-speed automatic transmission, the Renegade has enough power for most situations. The Trailhawk model adds a respectable 20:1 low range, proper tow hooks and skidplates, Selec-Terrain traction control system, and upgraded tires.
On smooth dirt roads or in sand, the Renegade is very tossable and forgiving. Feeling a lot like a rally car, the responsive Renegade is easy to drift around corners, all too often inciting laughter and smiles. The Renegade engages the driver, and the electronic nannies never seem too intrusive. On the slower, more technical portions of trail, the Renegade's traction control system distributes power to the wheels that have grip, a critical point since its limited amount of wheel travel means that the Renegade will often lift a wheel in uneven terrain.
Visibility is respectable through the large upright windshield, and big mirrors are good for watching the track of the rear tires. Removable roof panels give an open-air feeling only rivaled by the Wrangler, and the cabin is trimmed in high quality materials, including plenty of soft-touch plastics. With better approach and departure angles than the Cherokee Trailhawk, the ultra-maneuverable Renegade can often take lines that allow it to stay on the trail but avoid tougher obstacles. Ride quality is surprisingly good, and the Renegade won't beat you up off-road like other car-based competitors will.
After a day on some pretty technical trails, we had no doubts that the Renegade is a bona fide member of the Jeep family. There isn't a Subaru (or any other SUV in this class) that can hang with the Renegade deep off the beaten path. While it won't chase down Wranglers on the Rubicon, it is still an exceptional little runabout with a surprising amount of capability that makes quick work of light-to-moderate trails and is as just as capable in all-weather situations. The Renegade is equally adept as a first car, an urban commuter, or a weekend adventure machine. And it is every bit as fun as it looks.