With 600 hp Under Foot, Kat Ray's '06 Sierra Will Easily Catch You Sleeping 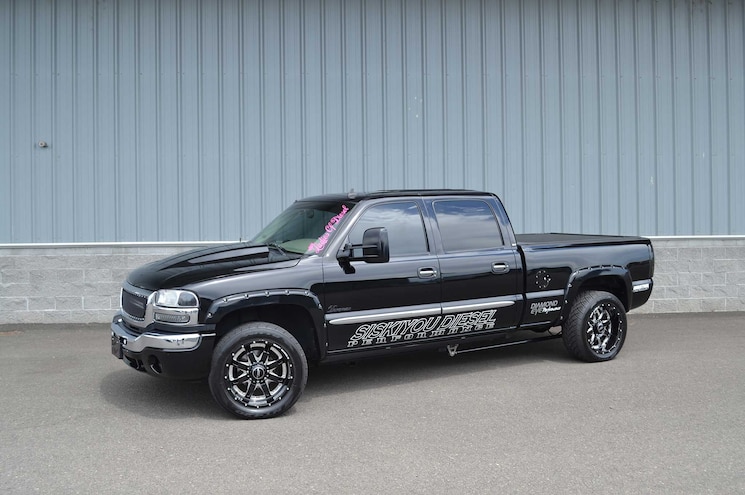 Most times, if a vehicle (especially a pickup truck) looks fast, it probably is. With Kat Ray's '06 GMC Sierra 2500HD Classic, the exhaust, tires, and even the truck's stance give you an idea that something is going on, but...mid-12-second quarter-mile times... with a mostly stock-appearing truck? Yes. With the help of her husband Mat, Kat has been there and done that, and her rig also puts down more than 600 hp at the rear tires. 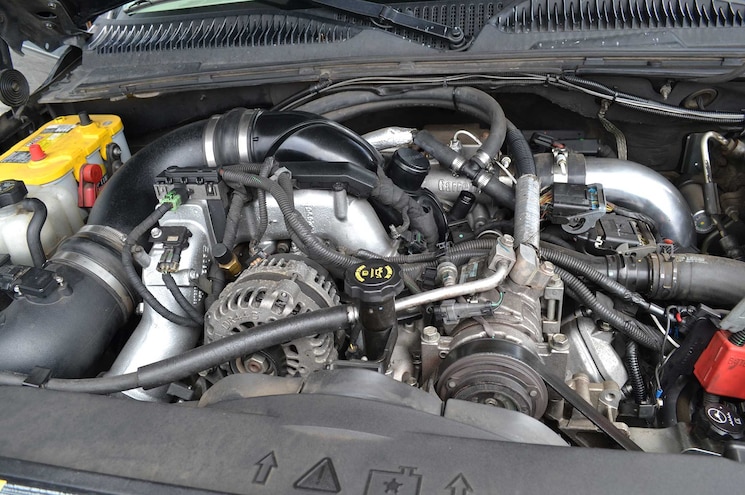 View Photo Gallery | 23 Photos
Photo 2/23   |   The engine in Kat Ray's '06 GMC Sierra looks mostly stock, so you might wonder where its 600 hp comes from. A few key modifications were all that were needed, but the majority of the engine itself (other than a set of ARP head studs) is just as stock as it was when the truck left the factory.
Kat bought the GMC in 2010, which is part of the reason why it's so powerful and fast. Instead of immediately trying to throw everything but the proverbial kitchen sink of upgrades at her Sierra, Kat slowly transformed the truck over the years with a number of well-thought-out modifications that would actually yield results. She also verified her work as she went along with data from either dyno or dragstrip tests.
Since Kat's husband Mat is the owner of Siskiyou Diesel Performance in Medford, Oregon, it's fair to say she received quite a bit of help. When it comes to withstanding serious horsepower, the stock Allison 1000 automatic transmission is one of the weakest links in the Duramax powertrain. Fortunately for Kat, Mat is a transmission builder and was able to fortify her GMC's gearbox with a PPE Stage 5 transmission kit, along with a custom-stall, triple-disc torque converter from Spec Rite Converters. 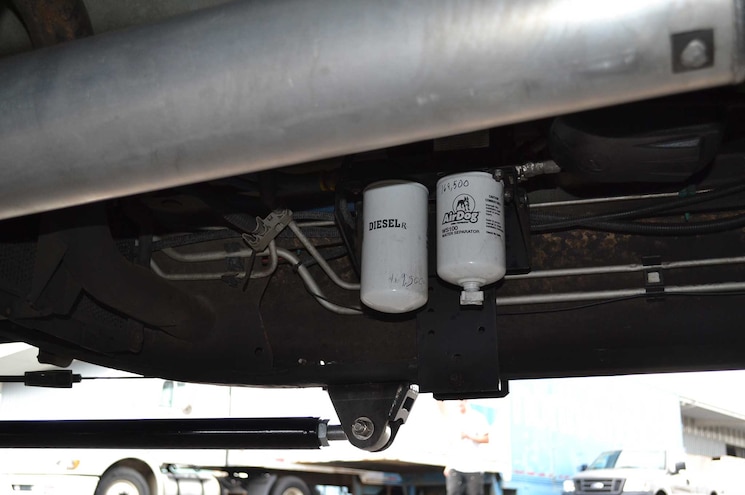 View Photo Gallery | 23 Photos
Photo 6/23   |   A 165-gph lift pump from AirDog is used to keep the stock CP3 injection pump under enough pressure at all times in order to squeeze every last bit of power out of the engine.
In addition to the transmission build, the chassis was also upgraded. Since four-wheel-drive launches wreak havoc on stock front ends, the truck received a set of upgraded tie-rod sleeves from Kryptonite, which keeps the front suspension from bending. The middle of the chassis was also reinforced with a Merchant Automotive transfer case brace, and the rear end of the Sierra received a set of Siskiyou Diesel Performance traction bars, and lowering shackles from DJM Suspension.

View Photo Gallery | 23 Photos
Photo 7/23   |   A five-position switch controls EFILive tunes that are programmed into the truck's computer. "It normally stays on Five," Kat says.
The real magic in Kat's rig is under the hood. The 6.6L Duramax received a number of upgrades since a blown head gasket sidelined the truck in 2013. The engine has gone from making high 400 to mid-500 hp, before finally breaking the 600hp barrier in 2015. After the head gasket issue was repaired with a set of ARP studs and new gaskets, the engine received a sleeper turbocharger upgrade in the form of a 68mm Garrett GT4094. A pair of Duramax LML exhaust manifolds was also fitted, as well as a Diamond Eye Performance 3-inch downpipe. The intake was upgraded to an AFE piece, and an MBRP 3-inch hot-side intercooler pipe was also installed to complement the upgraded turbo.
The fuel side of the GMC was upgraded as well, with a PPE Race Valve, fuel rails, and a 165-gph Air Dog II lift pump, but, surprisingly, both the CP3 pump and injectors are stock. Tuning is a very important aspect of power production, and Mat has tried a variety of tunes over the years using EFILive software. Currently, the programming that's yielded the best results is from Danville Performance, which has given a max-effort, impressively clean tune that only creates a light haze at full throttle. The final piece of the puzzle is a Snow Performance Power-Max water-methanol injection system, which has proven its worth with some very impressive dyno results.

View Photo Gallery | 23 Photos
Photo 8/23   |   Ever-popular Nitto NT420S tires get the call for traction where the rubber meets the road and are mounted on 20x10 BMF R.E.P.R. wheels.
While Kat has no plans to make her truck any faster, she also notes that "everyone should own a nice little 12-second driver" in addition to any race truck. With a best quarter-mile pass of 12.49 seconds at 108 mph and a peak dyno number of 601 hp with the water-meth flowing, Kat's GMC is definitely a fun ride. "I'd eventually like to take some weight out of it and upgrade some more of the suspension," she says. But, she adds, her current plans are to "just drive it and enjoy it, and to keep it for quite some time."
All in the Family 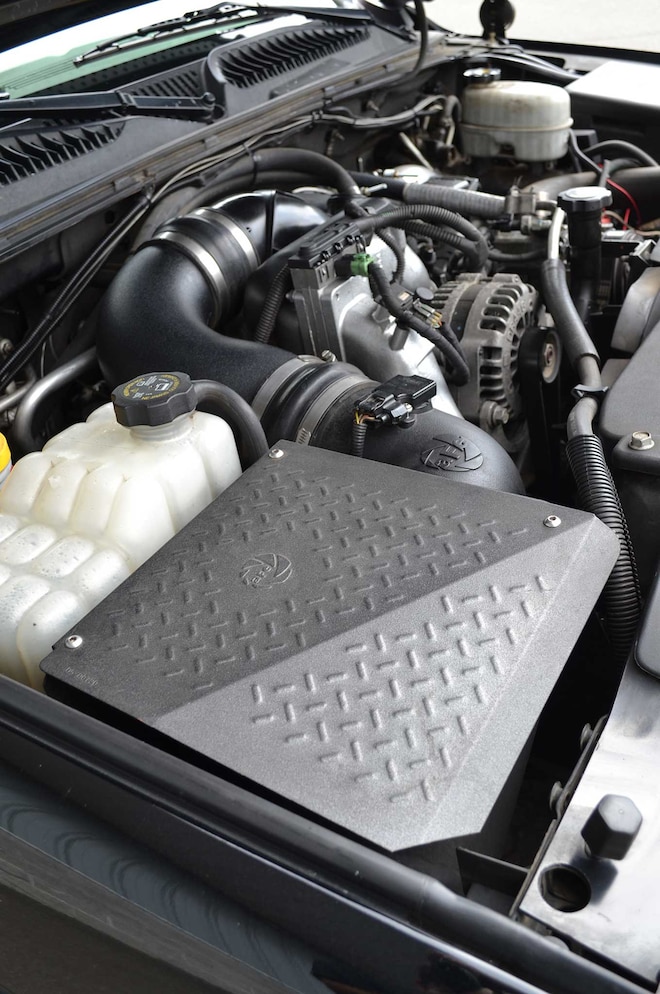 View Photo Gallery | 23 Photos
Photo 13/23   |   One of the few noticeable power cues on the 6.6L Duramax engine is an AFE cold-air intake system that was installed to provide additional airflow to the turbocharger.

View Photo Gallery | 23 Photos
Photo 18/23   |   Kat has been a regular racer at dragstrips in the past few years and has made hundreds of passes testing different tunes and combinations. Her current best is 12.49 seconds at 108 mph, with a 1.79-second 60-foot time.

View Photo Gallery | 23 Photos
Photo 23/23   |   Plenty of information is available to Kat as she tows or races thanks to twin Auto Meter gauges (boost and pyrometer), as well as a Snow Performance water-methanol controller and Edge Products CTS monitor.