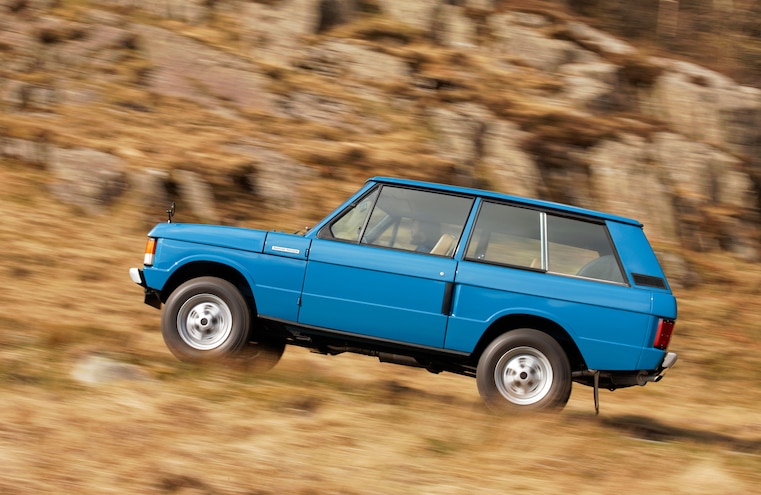 Range Rover is one of those vehicles that are famous around the world, even in places where there are no roads—perhaps especially in places where there are no roads. Nothing else before it offered the same level of off-road proficiency and in-cabin pleasantness. This is the machine that started the whole luxury SUV wave and still remains at the crest. And although we have the British to thank for creating it, we also have to thank the American market for inspiring it. 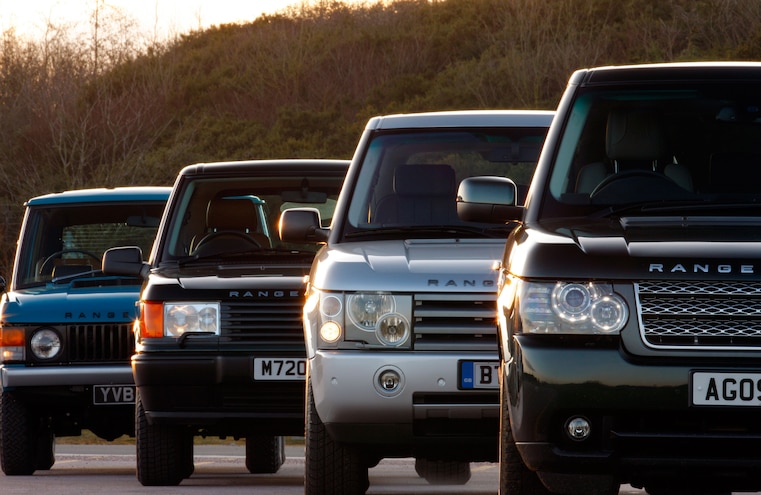 View Photo Gallery | 12 Photos
Photo 2/12   |   Range Rover Generations
In the early ’50s, the gentlemen at Land Rover thought it would be a good idea to make another model with broader appeal; something that was easier to drive but still had all-terrain chops. And so the idea of the Range Rover was born. As was typical for the British car industry of the time, nothing much happened for a while. Land Rover built a long-wheelbase variant of the Series off-roader called the 80-inch Station Wagon, which inspired the company to move the Range Rover off the back burner in 1966 and rename it the 100-inch Station Wagon. Thank goodness that title didn’t stick. More impetus came from wanting to sell vehicles in the growing North American market and seeing the success of the Ford Bronco and Jeep Wagoneer.
The very first model came as a two-door with a tailgate. Charles Spencer “Spen” King designed it, with input from fellow engineer Gordon Bashford. It turned out to be an accidental icon. The shape and proportions were meant to be only a temporary covering for a mule vehicle while testing the hardware underneath but the management liked it as it was. So did the famous Louvre museum in Paris, which put one on display as a fine example of industrial design. 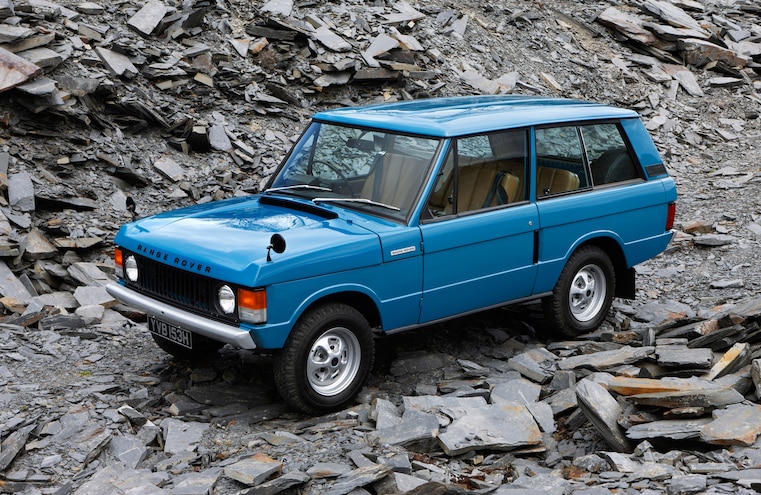 View Photo Gallery | 12 Photos
Photo 3/12   |   Classic Range Rover
There’s a law going back at least as far as 1628 that pretty much says, “an Englishman’s home is his castle.” Perhaps that was in King’s mind when he designed the “battlements” at either side of the clamshell hood, but they definitely serve to let the driver know exactly where the car’s front corners are, which can be truly useful when off-roading.
Initially, the Range Rover wasn’t that luxurious. It still had rubber mats so owners could hose out the interior. That also made it attractive to tweed-wearing types cradling hand-made Holland & Holland hunting rifles, as well as the horsey crowd. It wasn’t unusual to see newspaper pictures of some random member of British royalty turning up to a polo match in a Range Rover. 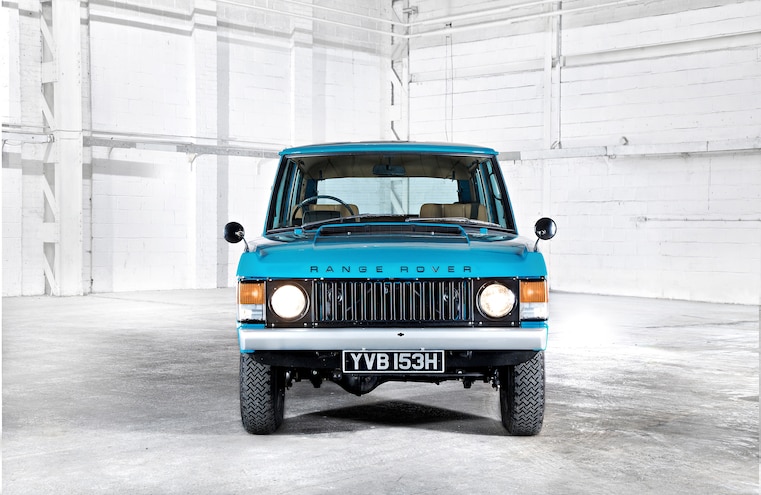 View Photo Gallery | 12 Photos
Photo 4/12   |   Classic Range Rover Front Shot
Things got more upmarket when the “In Vogue” edition came out in 1980, with air conditioning, carpets, walnut trim, and—gasp—Velour upholstery. Not only did the Range Rover come to define the luxury SUV niche, it also gave rise to the terms “Chelsea Tractor” and “Fulham Farmer” (those places being particularly well-to-do areas of west London). There was real substance beneath the status symbol, though. It employed a ladder frame, a torquey 3.5L V-8 engine, permanent four-wheel drive, and long-travel coil springs.
Range Rovers were used in the British Trans-Americas Expedition of 1972, the first vehicles to cross the two continents from north to south, which included the 100-mile stretch of rainforest and swampland connecting Panama to Colombia known as the Darién Gap. 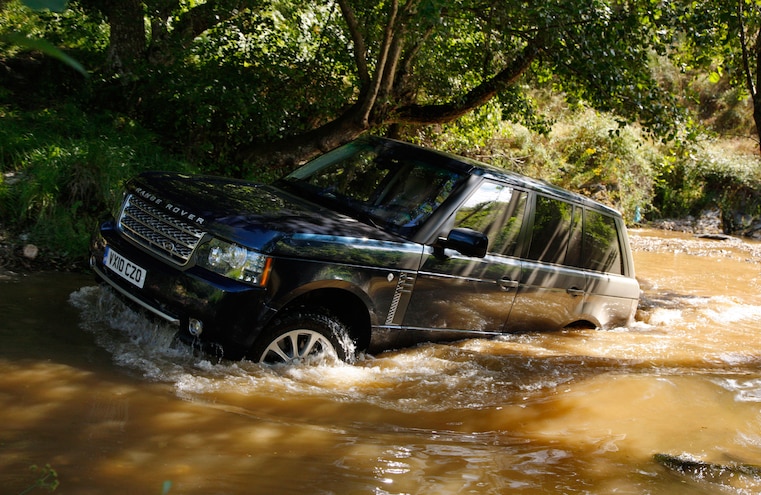 View Photo Gallery | 12 Photos
Photo 5/12   |   Range Rover Crossing Water
Power steering wasn’t added until 1973. A four-door version was introduced in 1981 and quickly eclipsed the two-door model. The Range Rover made its official North American debut in March 1987. The first generation lasted 25 years, which isn’t a record but remarkable nonetheless. Even when the second generation started, it was still possible to get a new first-gen model, renamed the Range Rover Classic.
The second-gen model lasted for eight years. Generation three, developed under BMW’s ownership, debuted in 2002 and was more of a leap forward, including unibody construction and independent air suspension. It also featured Land Rover’s new Terrain Response System. Its computer regulates engine revs, brakes, and gear engagement so different surfaces can be tackled just by twirling a dial. 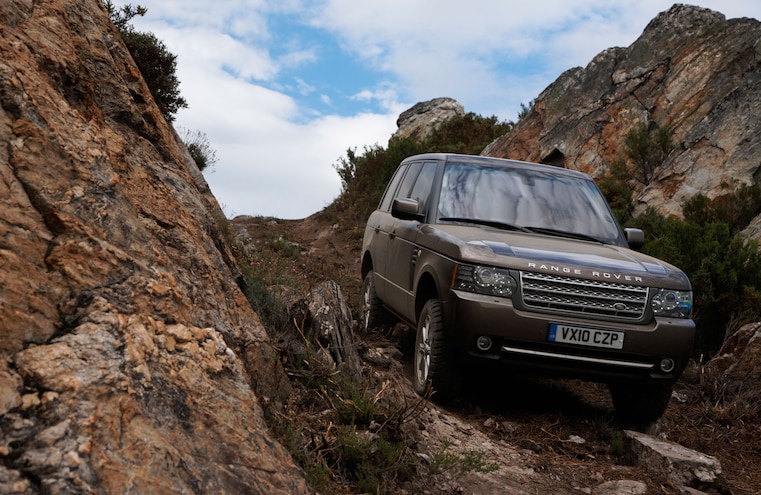 View Photo Gallery | 12 Photos
Photo 6/12   |   Range Rover Wheeling
As the Range Rover reputation has grown more monumental, its interiors have become more palatial. Generation Three’s wood, leather, and aluminum cabin is generally acclaimed as a thing of beauty.
Ford bought the Green Oval in 2000 and then sold Land Rover and Jaguar to the Indian conglomerate Tata in 2008. The fourth, and current, generation came along in 2012 and cements the Range Rover as a true phenomenon. It’s often been called the Rolls-Royce of SUVs, a notion underlined by the recent launch of a long-wheelbase, ultra-luxurious version—the SVAutobiography—costing around $200,000. There’s a good chance the Range Rover might retain that title even when Rolls-Royce brings out an SUV of its own.