There has been a lot of exciting news in the truck world these past couple of years, and it doesn't look to be slowing down any time soon. Certainly the most anticipated has been from Cummins, by way of Nissan. Two years ago, we were introduced to the all-new Cummins ISV 5.0L V-8 diesel engine and were told there was a manufacturer with real plans to bring it to market in a light-duty pickup. Half a year later the Nissan Titan XD was announced. While it's been a long road, one where we have yet to get behind the wheel of a 5.0L Cummins-powered Titan, there have been some exciting stops along the way.

View Photo Gallery | 39 Photos
Photo 2/39   |   Nissan is the first pickup manufacturer to partner with Cummins on the 5.0L V-8 Turbo Diesel engine. Despite what the Internet says, there is no exclusivity between Nissan and Cummins, leaving the door wide open for other OEs to join the party if they so choose.
Back when the ISV 5.0L was first launched in Columbus, Indiana, the folks behind the engine took us on a tour of their newly built production facility. Not all of the machines were in yet and only small samples of engines had been produced, which they were mostly handbuilt. Fast forward two years and we're back at the Columbus Engine Plant (CEP). However, this time the assembly line is complete and engines are rolling off of it. Before you get too excited, the plant is still technically in pre-production mode. What this means is that the assembly line is complete and engines are being built, but it's at a much slower pace than full production, and changes to process, procedure, and product are all still being implemented. Cummins expects the plant to be running at full steam by the end of 2015.

View Photo Gallery | 39 Photos
Photo 4/39   |   Within the walls of the Columbus Engine Plant resides a full research and development facility, complete with their own test cells. Seen here is an engine that has been fully instrumented and is prepared for several very long days of extreme testing and validation work.
There are two variations of the 5.0L V-8 being built at CEP: one for industrial use and one for the pickup market. The two engines have a lot in common, and ultimately the only differences are found in the turbochargers, front accessory drive, and ECM tuning. In Cummins' language, "ISV" refers to the industrial application V-8, while "5.0L V-8 Turbo Diesel" references the engine built specifically for the pickup market.
The Columbus Engine Plant dates all the way back to the early 1900s and served as the site of founder Clessie Cummins' first engine production facility. Over the years, additions have been made and the plant reconfigured dozens of times, but the original section of plant is still in use and identifiable by its wood beams and riveted structure. The plant's previous resident was the 15.0L ISX. Assembly of the ISX was moved to New York, but machining of the head and block still remain at CEP. Along with ISX machining, CEP handles the block and head machine work for the 5.0L, assembly of the M-Squared turbochargers for the 5.0L, and assembly of both variants, the ISV and 5.0L. At full-tilt, the plant will be able to churn out between 200,000 and 300,000 V-8s per year (depending on who you ask), and the allocation of ISV and pickup engines can be changed on the fly depending on demand. 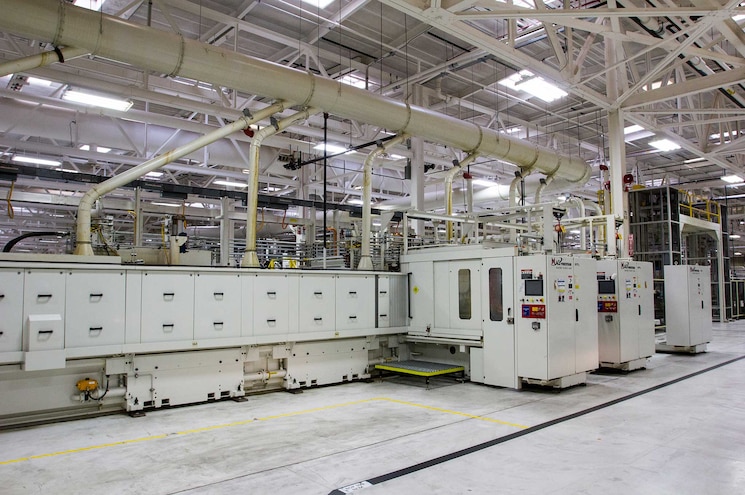 View Photo Gallery | 39 Photos
Photo 5/39   |   High-tech automation is the name of the game in this day and age. Raw engine block castings (from Brazil) and head castings (from Mexico) enter the facility and are sent through a fully automated machining process. This extremely precise process is monitored at every step by computers and robots, and then verified by humans to ensure that every block and head meets the strictest of guidelines.
We are beyond excited for this engine to finally see the light of day. The Cummins 5.0L V-8 is high-tech, modern, powerful, quiet, and adaptable; all the things truck builders are shopping for in an engine these days. And once word gets out, we're certain this plant will be humming along as fast as it can for decades to come. And we can't wait to come back and see this beauty running in full glory.

View Photo Gallery | 39 Photos
Photo 10/39   |   The finished block and heads come out looking like works of art. Each piece is stamped with a 2D serial number that enables tracking through the entire machining and assembly process. Once machining is finished the block and heads are introduced to the Common Block assembly line, where the pieces that are common between the ISV and pickup engine are assembled.

View Photo Gallery | 39 Photos
Photo 11/39   |   Subassemblies, such as the air handling unit, front cover, and M2 turbocharger are built on lines much like this one. Once complete they are transferred to the Common Block, ISV, or pickup assembly lines for installation on the engine.

View Photo Gallery | 39 Photos
Photo 12/39   |   Automation is utilized at all steps throughout the assembly process and ranges from robots that complete a task completely autonomously to torque and turn sensing guns used by humans for tightening bolts. Each engine carries with it a digital "birth certificate," which lists such detailed information about the engine that the torque of a specific bolt can be pulled up at any time.

View Photo Gallery | 39 Photos
Photo 13/39   |   Seen here are completed front cover assemblies being loaded for transport to the engine assembly line. Employees are divided into teams and trained on their specific sub-assembly. These teams create accountability and ownership that ultimately translate into a safer, happier, and more mistake-free work environment.

View Photo Gallery | 39 Photos
Photo 14/39   |   Cummins' turbo division, Cummins Turbo Technologies, produces turbochargers for all of the company's engines. While most are manufactured offsite and shipped to the engine assembly plants, the unique M-Squared (M2) turbocharger for the pickup engine is assembled at the same location as the engine.

View Photo Gallery | 39 Photos
Photo 15/39   |   The pistons enter the facility with their rings already in place, rods are then attached, and the completed assembly is installed into the block the old fashioned way—by hand.

View Photo Gallery | 39 Photos
Photo 16/39   |   On the Common Block assembly line, the heads are mated to the block, and camshafts, timing chains, glow plugs, oil pan, front cover, and any other part that the ISV and pickup engine have in common are installed. Once complete, the blocks shift to either the ISV or pickup line to have their specific turbocharger, injectors, accessories, and anything else unique to the engine's application installed before heading off to cold and/or hot testing.

View Photo Gallery | 39 Photos
Photo 17/39   |   Once finished, the Cummins 5.0L pickup engines are crated up and loaded onto trucks for the nine-hour journey south to Canton, Mississippi, where they will find their forever home under the hood of a Titan XD. We wouldn't be too sad if one of these fell off the truck and landed in our driveway—just sayin'.