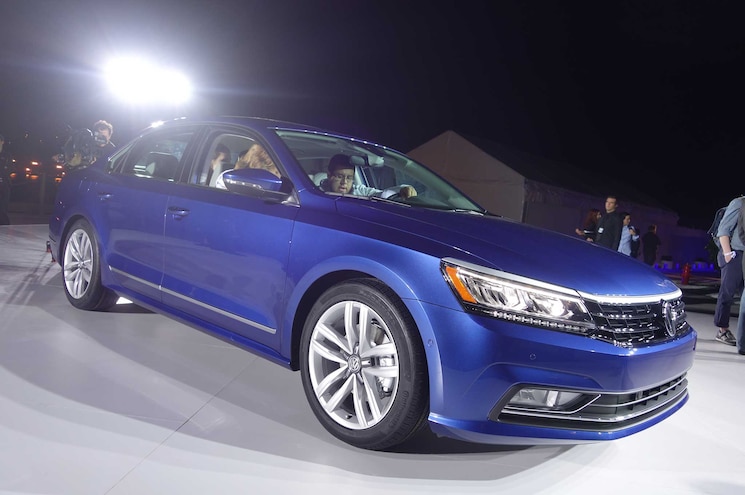 Despite the dark cloud of controversy surrounding clean-diesel TDI engines, Volkswagen treated media, VW employees, dealers, select customers, and friends of the brand to a gala unveiling of its redesigned '16 Passat.
The event, held on September 21, 2015, inside Brooklyn, New York's cavernous Duggal Greenhouse, opened with Michael Horn, President and CEO, Volkswagen of America, immediately addressing the evening's other hot topic. Yes, Volkswagen indeed manipulated the ECU software of its 2.0L I-4 TDI diesel cars (violating federal emissions standards). "Let's be clear on this. Our company was dishonest. With the EPA and the California Air Resources Board, and with all of you," Horn said. "We've totally screwed up." He also offered the company's and his personal apology for "VW breaking the trust of its customers and the public here in America."

View Photo Gallery | 10 Photos
Photo 2/10   |   In what we can only think is Volkswagen's confidence that the company will overcome the debacle surrounding its 2.0L TDI engine program (ECUs in clean-diesel models were programmed to present false emissions readings), VW of America President and CEO, Michael Horn, introduced the all-new '16 Passat at a gala reveal event held in Brooklyn, New York, on September 21, 2015.
With that business handled, Horn introduced the star of the evening, the all-new '16 Volkswagen Passat, which entered the space in grand fashion (driving onto an elevated, revolving stage in the center of the building) amid the camera shots of everyone in attendance.
As you approach the Passat and notice its wider profile and a perceived lower stance, the changes that give it this look are immediately recognized. An aggressive, restyled domed hood, slim LED headlights, wide front fenders, a four-bar grille, and front bumper highlight what is definitely a much sharper fascia than that of the '11-to-'15 sedans. And in the rear, a new bumper, chrome-accented decklid, flush-with-the-body license-plate mount, and LED taillights anchor the major exterior updates for 2016 (doors, roof, and bodyside stamping is the same as before).
On the inside, cabin upgrades are highlighted by an updated center stack that includes MIB II—the second generation of Volkswagen's "modular infotainment" platform (a swipeable, pinch-zoom touchscreen that's now included as standard equipment)—along with a new instrument panel, redesigned steering wheel and column stalk, two-tone decor panels, and chrome and piano black trim. VW's smartphone-compatible Car-Net system is also available in the '16 Passat, as are heated rear seats and Easy-Open keyless trunk access.

View Photo Gallery | 10 Photos
Photo 7/10   |   Brighter LED headlights and taillights are a first-time standard feature for Volkswagen sedans.
For buyers looking for "sport" in their midsize, an R-Line Passat is being offered for the first time. With such unique features as rocker panels, a stylized front bumper with contrasting black accents, a modified rear diffuser, and 19-inch Anthracite Salvador aluminum-alloy wheels (with 235/40 ZR rated tires), we think this model will be popular with younger members of the four-door set—especially if VW elects to make clean-diesel an optional engine choice.

View Photo Gallery | 10 Photos
Photo 8/10   |   If seeing the '16 Volkswagen Passat first wasn't enough, guests were also treated to the music of Grammy-winning recording artist Lenny Kravitz, whose band kept all in attendance rocking well into the evening.
It's disappointing, but also understandable, that details on Passat's 2.0L TDI engine were in limbo on reveal night (we were not even permitted to photograph the diesel in the display vehicle). Information about performance, pricing (which starts at $22,440 for 1.8L turbocharged S gasoline-powered models with automatic transmissions), and the on-sale date for clean-diesel versions were not revealed, nor was any estimate of when Michael Horn's pledge for VW to "make things right (with the EPA and CARB, dealers, customers, and such)" will be fully completed.
Based on styling, appearance, safety, and high-tech goodies alone, the new-look '16 Volkswagen Passat is definitely a sedan that's worth considering. However, until the fate of its 2.0L turbodiesel is resolved, we'll hold off on putting it in the "must buy" category.

View Photo Gallery | 10 Photos
Photo 10/10   |   Techies will surely geek out on the Passat's updated interior, highlighted by a redesigned steering wheel and column, instrument cluster (note the two big, round speedometer and tachometer gauges), and a swipe-screen/pinch-zoom MIB II infotainment system that also serves as the foundation for the available VW Car-Net, which brings together the three major smartphone integration platforms—Apple CarPlay, Android Auto, and MirrorLink—for seamless use with most popular smartphones.