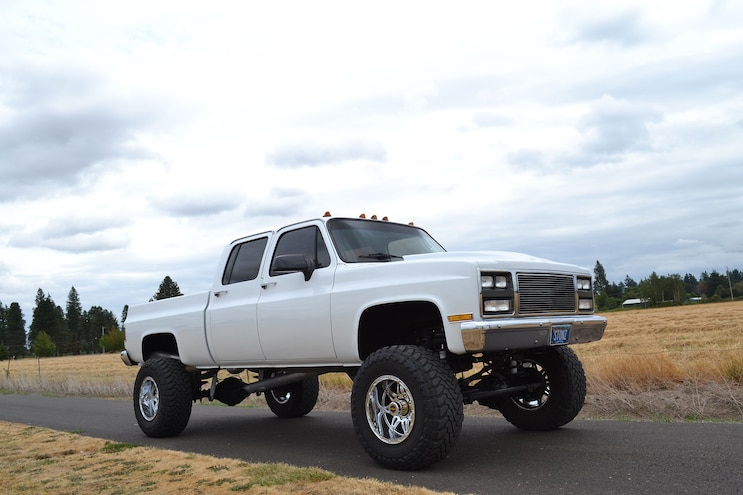 It's hard to believe, but the pristine ’89 Chevrolet C30 pickup you see here was actually in a junkyard when Jeff Stone found it. The truck had issues with its original 6.2L diesel powerplant and already had parts and pieces removed from the engine (like the cylinder heads) when Jeff came across it. The truck had only a little more than 80,000 miles and was in good shape. Since Jeff bought the C30 with installing a 6.6L Duramax engine in mind, he didn't care about the missing items and dragged the carcass home. Jeff wanted a lifted four-wheel-drive truck (known as a K30), so he knew he'd have a long road ahead of him since the piece he bought was a lowered two-wheel-drive dualie. The dualie bed was replaced first with a regular fleetside version. Next was the complete suspension, which had to be changed from two-wheel drive to four-wheel drive. The rear upgrade was fairly simple, with a set of Tuff Country EZ Ride Suspension’s leaf springs and blocks providing a whopping 10 inches of lift. Mated to the suspension is an ultra-strong AAM 1150 rear end from anl’05 Chevrolet Silverado 2500HD donor vehicle. With the rear suspension squared away, the front needed to be equally stout, so a Dana 60 out of a ’00 Dodge Ram got the nod to be used as the project’s front axle, and it was treated with 4.10:1 gears, a Randy's Ring and Pinion free-spin hub kit, and a custom three-link suspension built by Custom Exhaust Specialties. 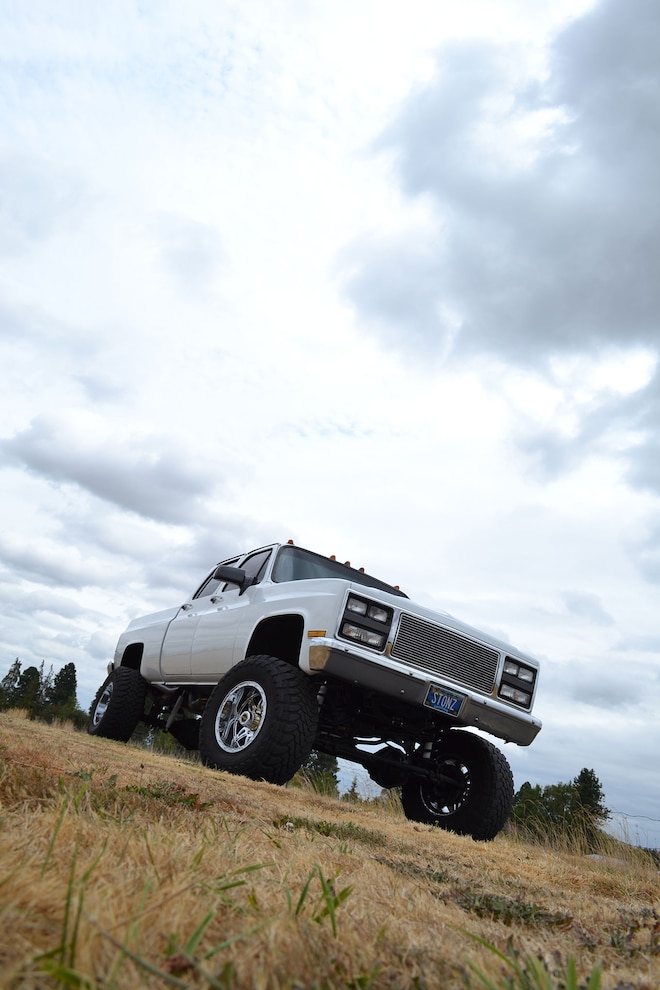 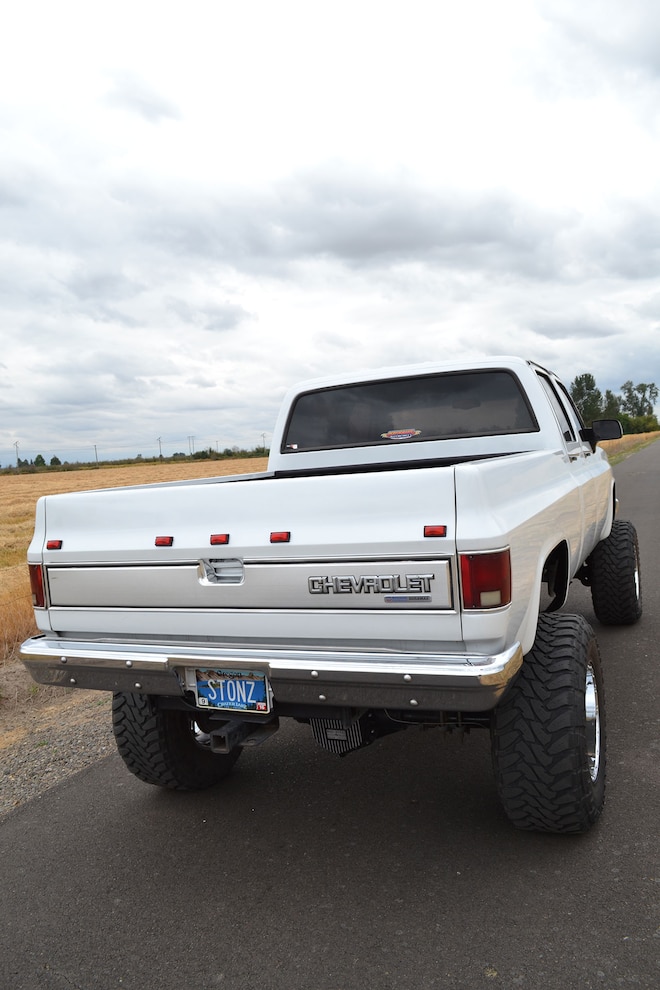 View Photo Gallery | 23 Photos
Photo 3/23   |   018 1989 Chevy K30 Rear
With the project looking a little more like Jeff intended (lifted, with two axles and a fleetside bed), Jeff turned his attention to the powertrain. The same ’05 Chevy that donated its axle also gave up its engine, transmission, and transfer case to the project, in order to power the ’89 down the road. Since Jeff didn't want to install the engine more than once, he made a list of supporting modifications designed to achieve the type of power he was looking for. The first upgrade was a set of ARP head studs, which was installed to keep the engine from having head gasket issues down the line. The Duramax was also upgraded with a PPE driver-side exhaust manifold and installed with a PPE stand-alone wiring harness, which took care of all the electrical work. 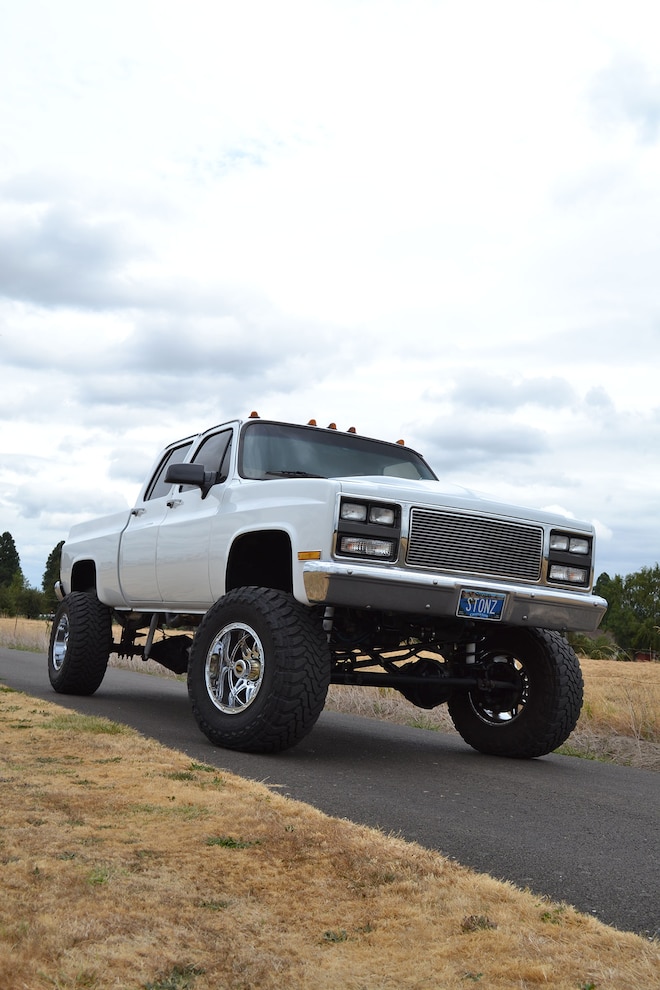 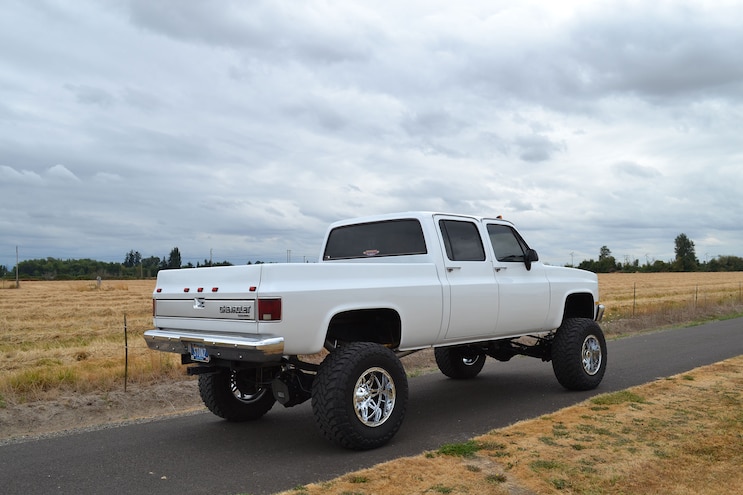 View Photo Gallery | 23 Photos
Photo 5/23   |   019 1989 Chevy K30 Rear Three Quarter
While a stock Duramax engine is much more technologically advanced than the C30’s original 6.2L powerplant, Jeff decided to kick his up a notch with some additional performance parts. While the engine was out of the truck, an Industrial Injection 30-percent-over CP3 injection pump and injectors were added, and a BorgWarner S475 turbocharger was mounted in front of the stock turbo. Tuning was handled with EFILive’s DSP5 five-position switch, which features ECU calibrations by “Idaho Rob” of Adrenaline Truck Performance. The five-speed Allison automatic transmission also received a few upgrades, such as a triple-disc torque converter from SunCoast Diesel Transmissions, and a TransGo shift kit. 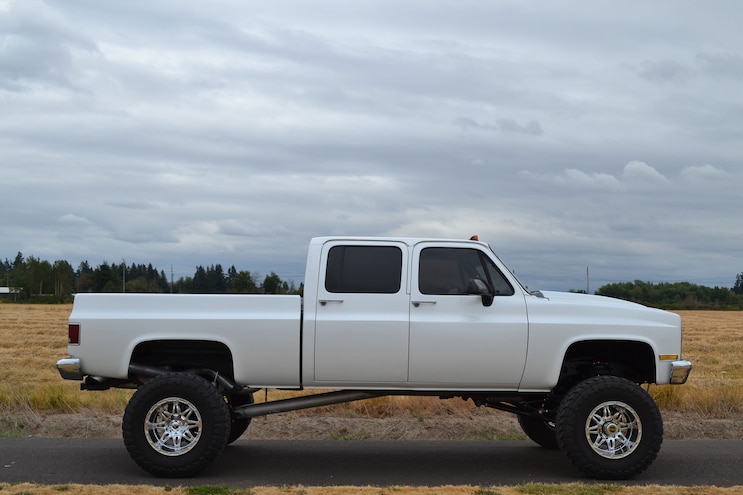 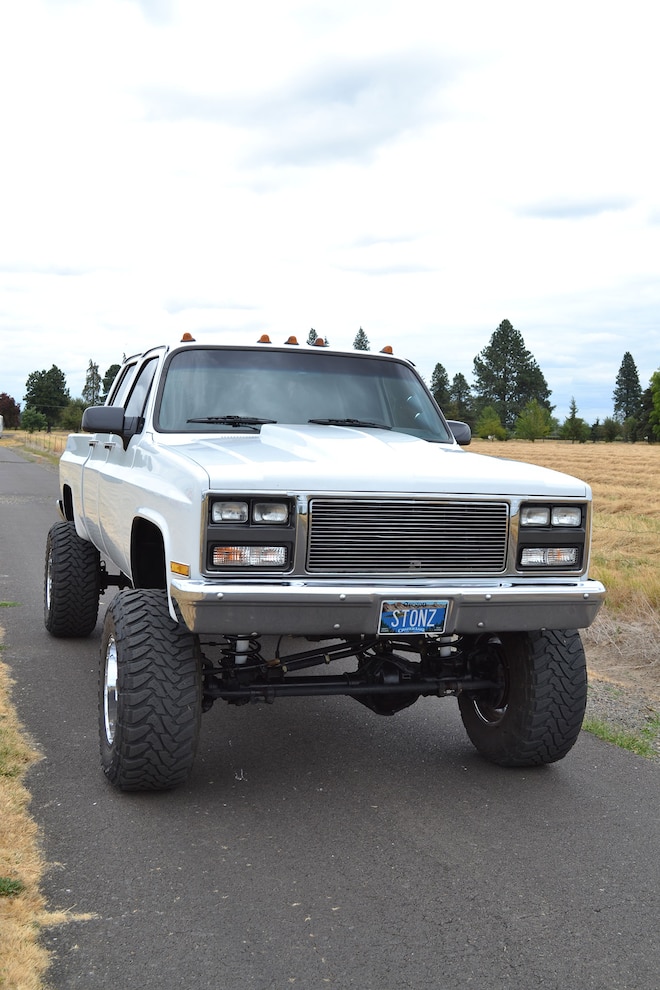 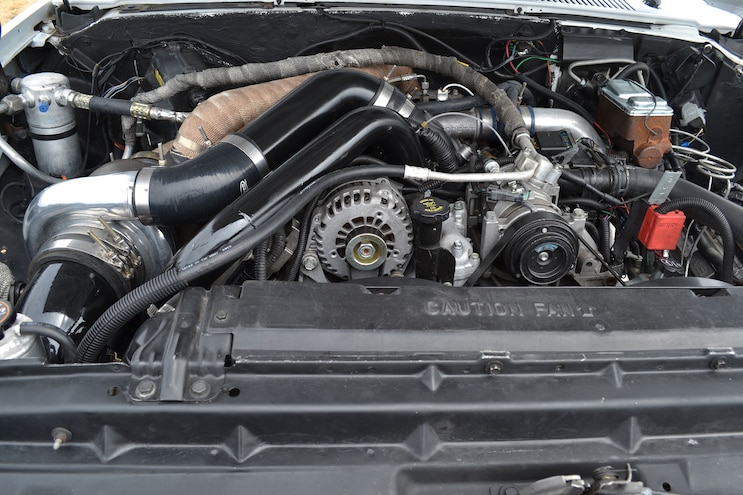 View Photo Gallery | 23 Photos
Photo 8/23   |   There's plenty of room for the 6.6L Duramax engine in Jeff Stone’s ’89 Chevrolet C30-come-K30, since the truck has a mammoth engine bay. Thanks to a number of upgrades, the compound-turbocharged powerplant makes an estimated 600 hp, and more than 1,000 lb-ft of torque. 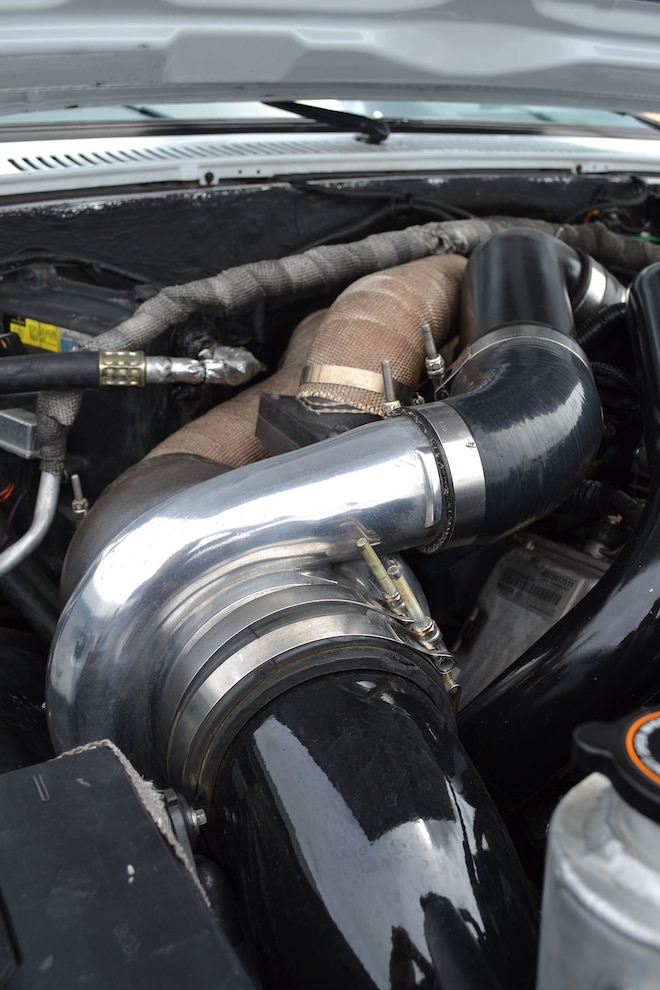 View Photo Gallery | 23 Photos
Photo 10/23   |   Jeff made good use of the ’05 Chevrolet Silverado 2500HD he purchased, installing its radiator and intercooler in the C30 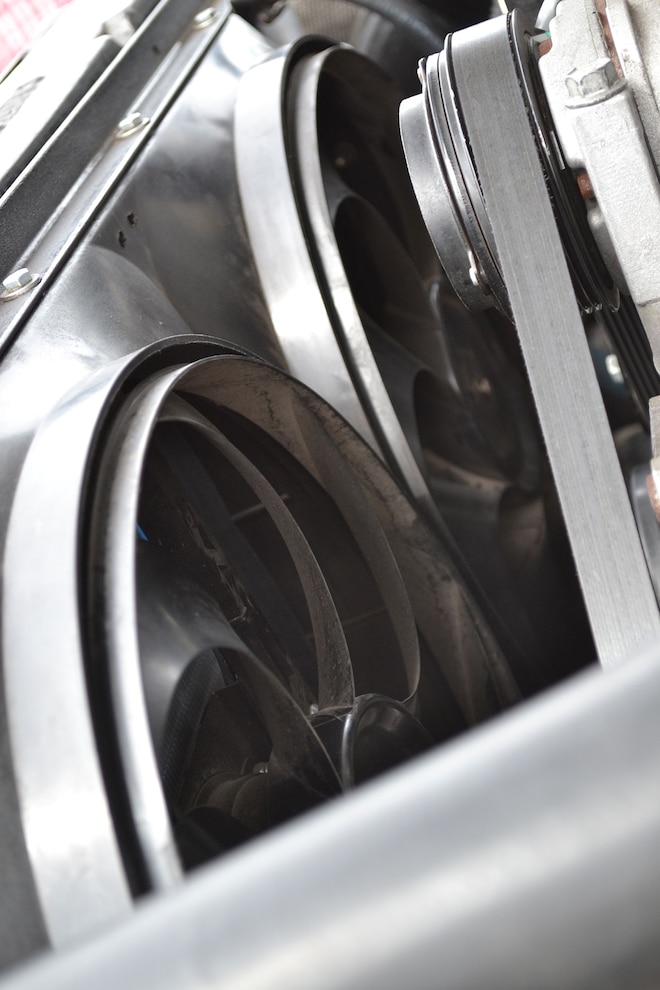 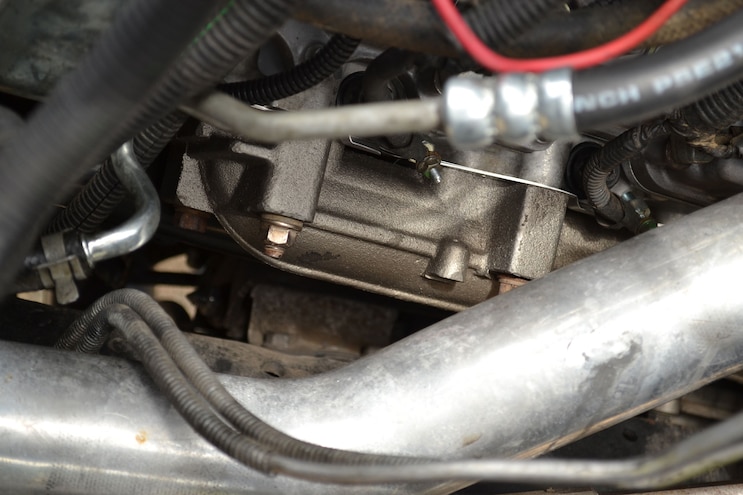 View Photo Gallery | 23 Photos
Photo 12/23   |   A stock ’05 6.6L Duramax has a driver-side manifold that is necked down for clearance. With plenty of room in the engine bay, the OEM manifold was replaced with a higher-flowing piece from PPE. 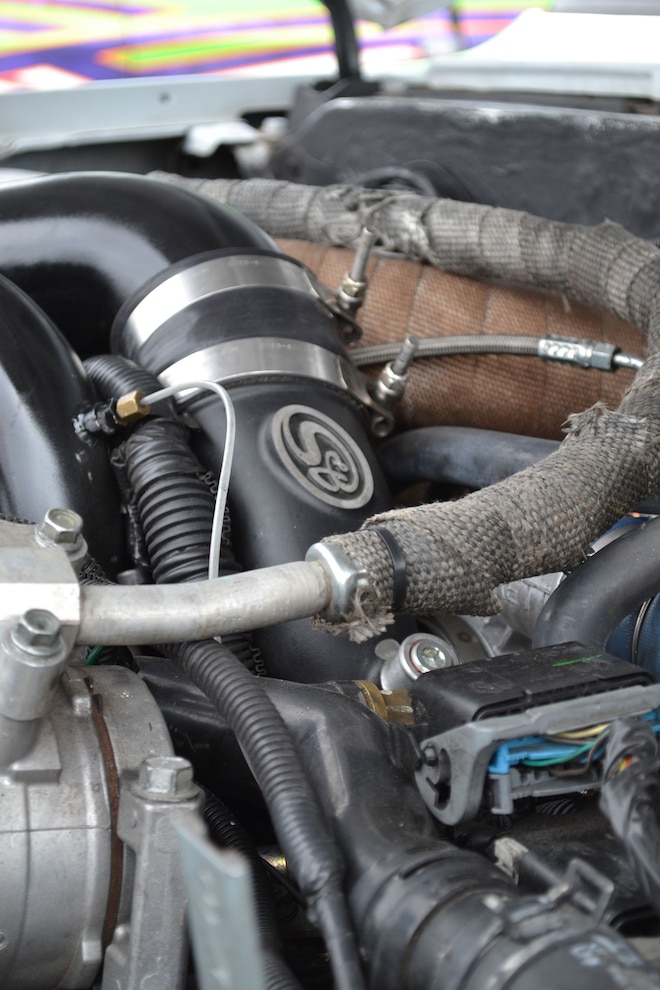 View Photo Gallery | 23 Photos
Photo 13/23   |   Given the high boost levels compound turbos create, the crack-prone stock Y-bridge can be a weak link, so Jeff replaced the original version with an S&B Filters unit. 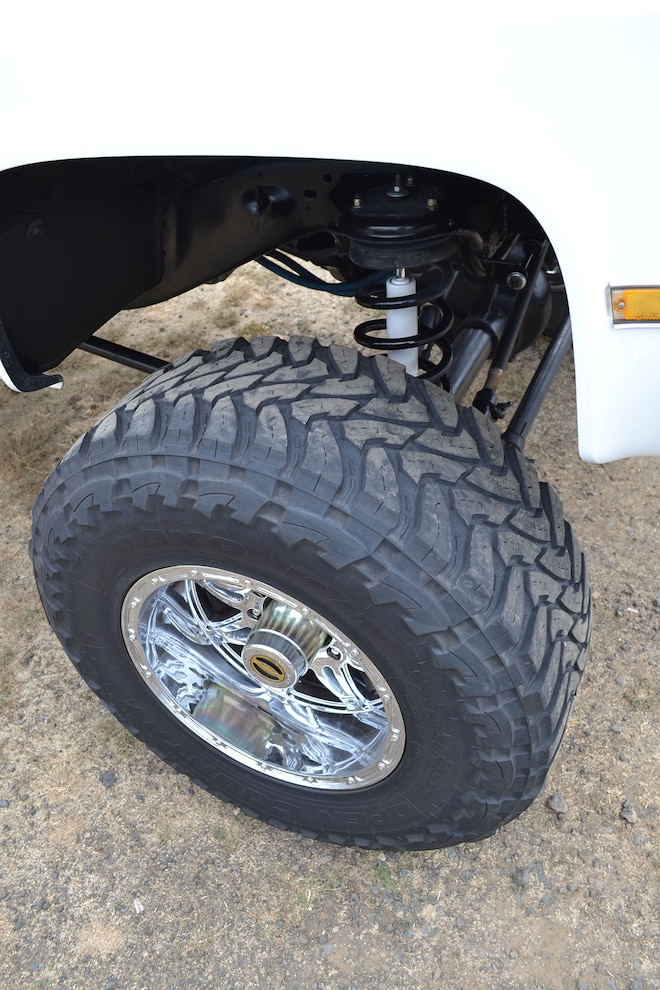 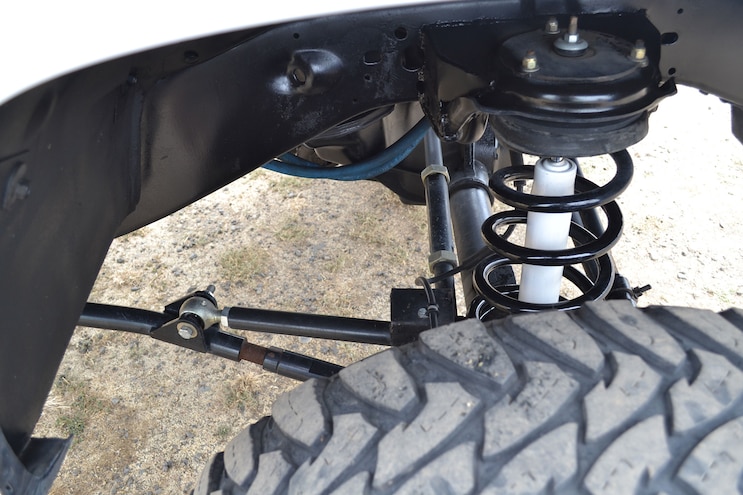 View Photo Gallery | 23 Photos
Photo 15/23   |   As Jeff’s ride was originally a two-wheel drive, a lot of work was performed to transform it into a 4x4. A Tuff Country EZ Suspensions system was adapted to the front of the C30 by Custom Exhaust Specialties in Bend, Oregon. 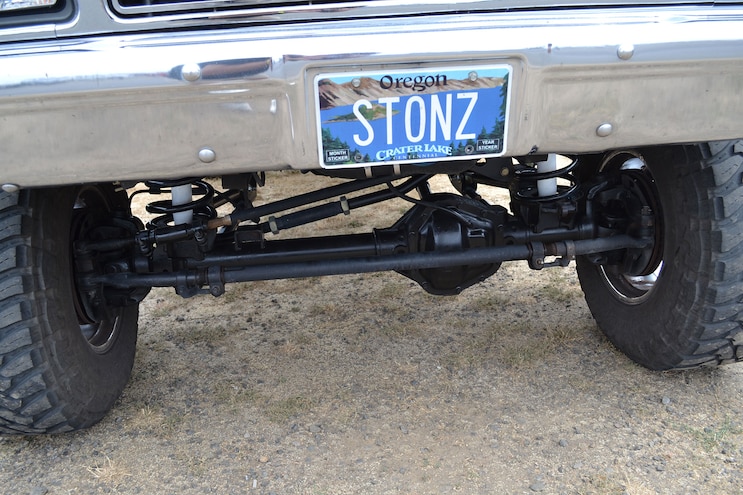 View Photo Gallery | 23 Photos
Photo 16/23   |   The tough Dana 60 axle of a ’00 Dodge Ram was swung under the front of the truck. It’s equipped with a free-spin hub kit from Randy's Ring and Pinion, which Jeff figures is worth a few extra miles per gallon in fuel economy. 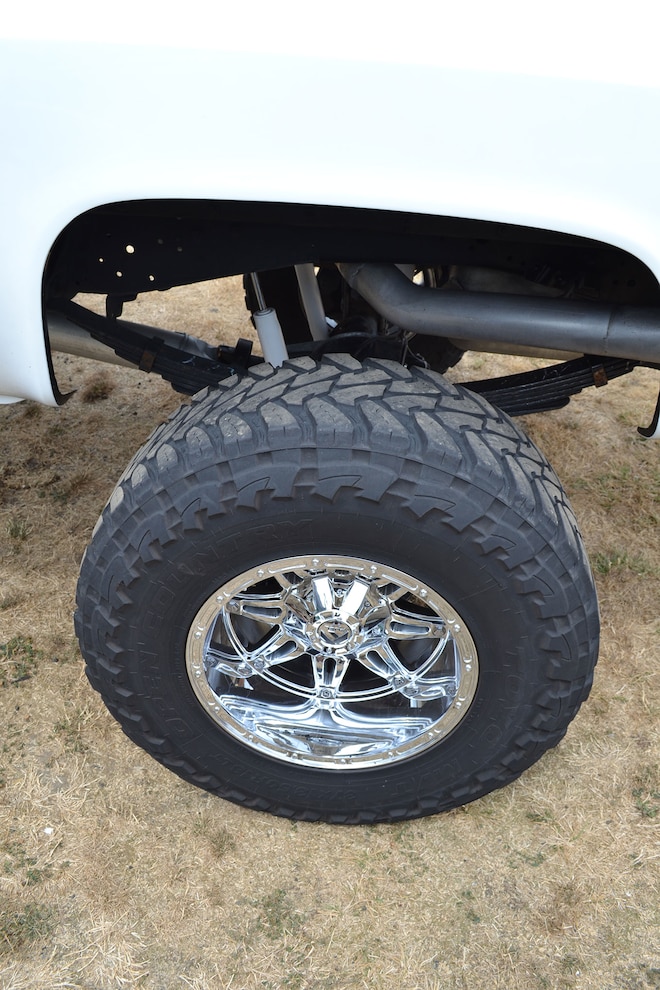 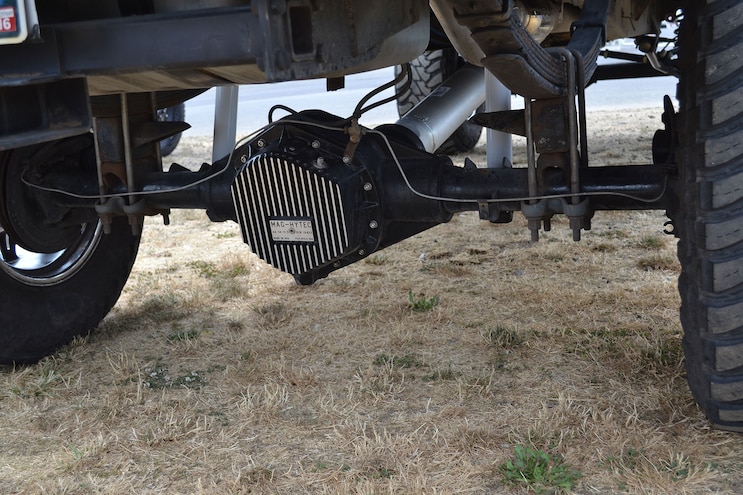 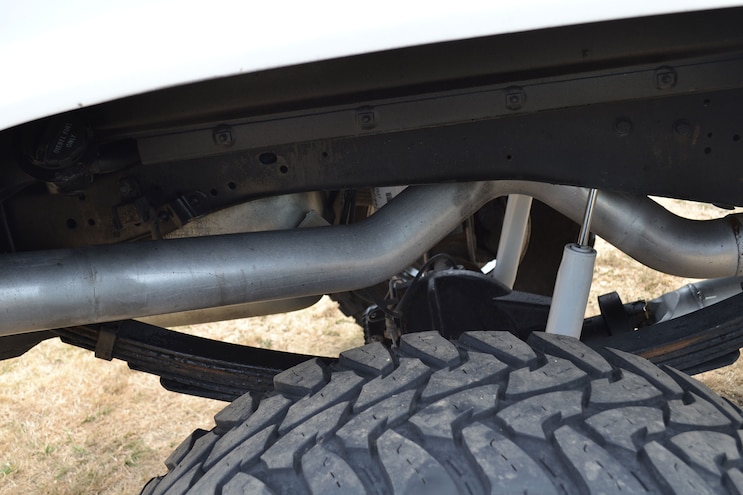 View Photo Gallery | 23 Photos
Photo 19/23   |   Custom Exhaust Specialties lived up to its name by fabricating a cool 4-inch exhaust with a 4-inch muffler and dual exits for the project. 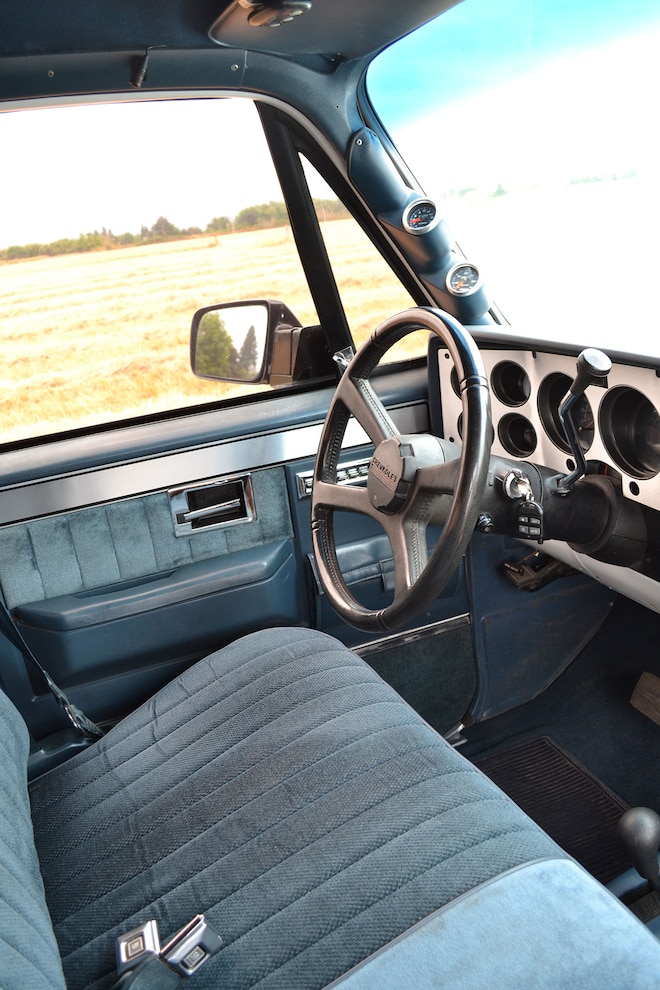 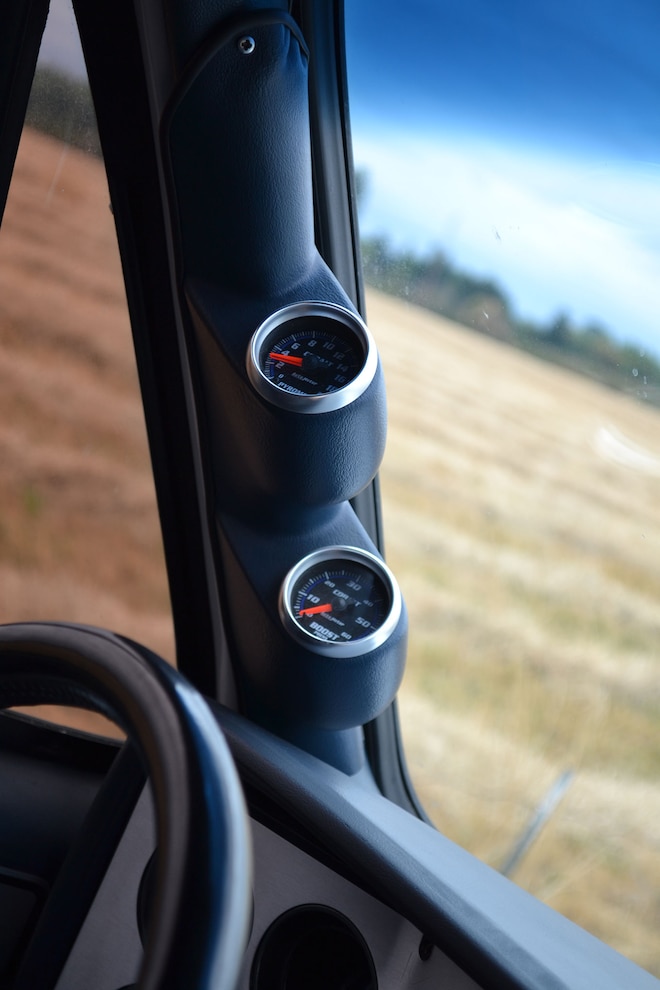 View Photo Gallery | 23 Photos
Photo 21/23   |   Jeff kept the gauges simple in his rig, with a two-pod boost and pyrometer setup. Using a clean but powerful tune, neither gauge gets anywhere close to the danger zone. 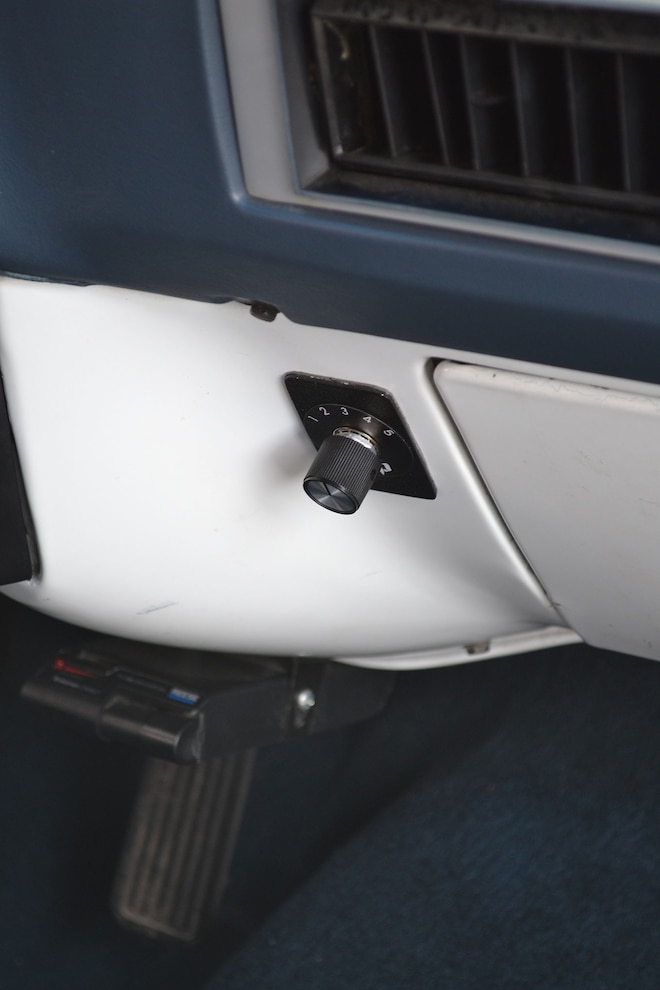 View Photo Gallery | 23 Photos
Photo 22/23   |   The only interior hint at what’s lurking under the hood is an EFILive DSP5 switch, which controls five tunes from “Idaho Rob” at Adrenaline Truck Performance. 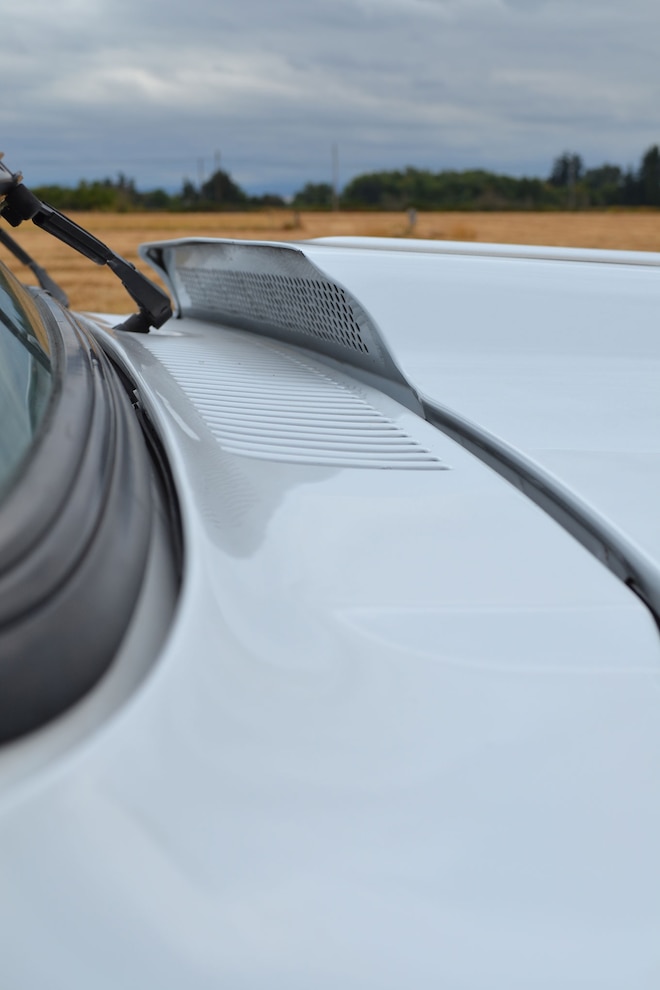 View Photo Gallery | 23 Photos
Photo 23/23   |   A Reflexxion Automotive cowl hood clears the Duramax engine and adds some style to the truck at the same time. After everything was assembled, the truck was painted Pearl White by Shawn Kooch.