The Second Time’s a Charm 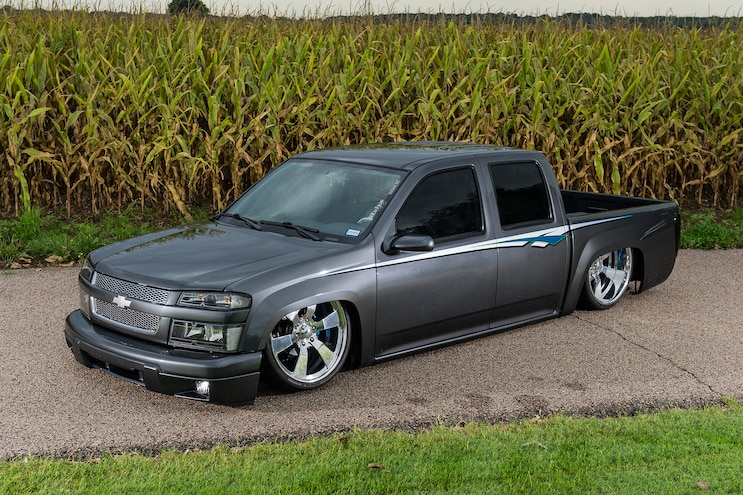 Tyler Briggs has always liked working with tools and tearing into things to figure out how they work. Growing up working on dirt bikes, four wheelers, and golf carts gave him a valuable skill set. Back in high school in Huffman, Texas, a few of his older friends already had trucks and were in the truck scene, which gave him the opportunity to work on custom trucks and gain valuable experience in lowering, lifting, and bag systems. 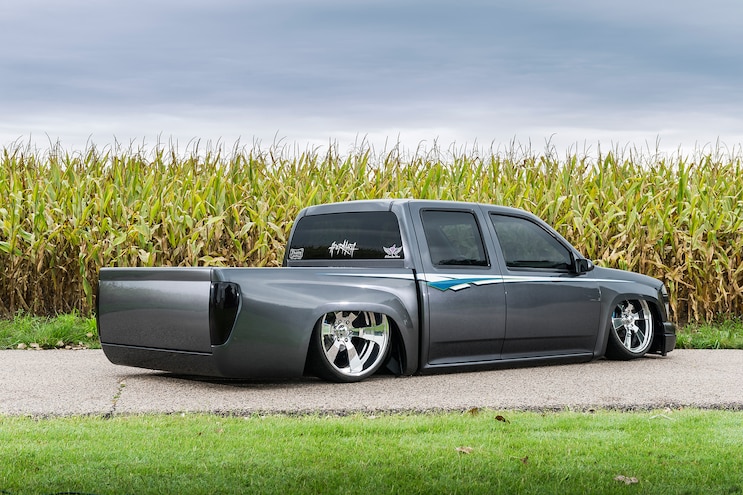 View Photo Gallery | 12 Photos
Photo 2/12   |   02 2005 Gmc Canyon Rear Three Quarter View
Right out of high school, Briggs parents gave him a black, extended-cab Colorado as a graduation present. It didn't take long for Briggs to lower his truck and install a set of 20s. He won a small trophy at a local truck s how, but after attending a bigger truck show in Texas he soon realized all the best rides were bagged on big billet wheels with nice interior and paint. Briggs knew his truck couldn’t compete as it was, so stepped up his game. 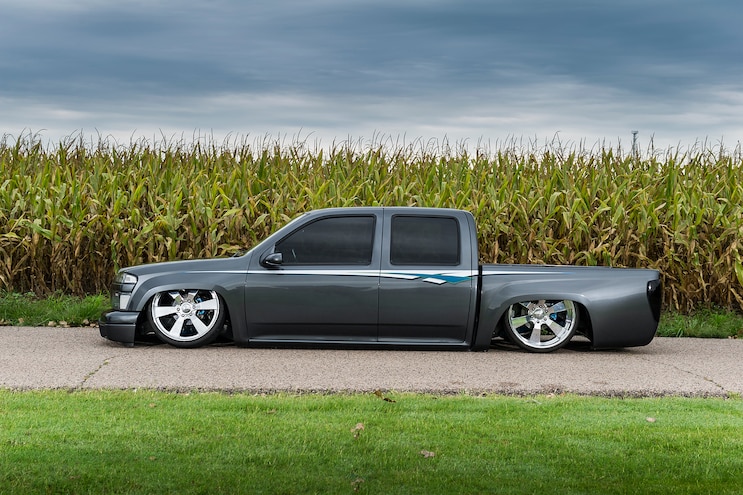 View Photo Gallery | 12 Photos
Photo 3/12   |   03 2005 Gmc Canyon Side
A year went by and Briggs brought his truck to another show bagged on black 22s with a narrowed rear end, nice interior, and a new sound system. At that show, he met some members from the truck club Aftermath. Mike Matamoros and Brandon Anderson were impressed with his truck and the fact that he did it all by himself, so they approached him and asked if he had ever wanted to join a truck club. It was music to Briggs’s ears. He always thought it would be cool to be a part of a club. 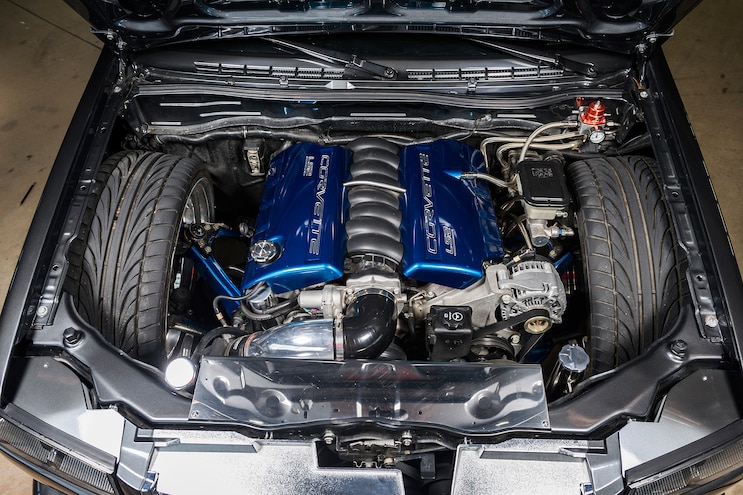 View Photo Gallery | 12 Photos
Photo 4/12   |   04 2005 Gmc Canyon Ls2 Engine
After about a year of hanging out with the club at car shows, BBQs, and picnics—Briggs became an official member of the Aftermath Texas chapter. By 2011, Tyler was fully logoed at the Texas annual Aftermath picnic in Temple, Texas. He continued to attend shows like Scrapin’ the Coast, Turkey Drag, Ribs & Rods, Lonestar Throwdown, Cajun Nationals, and Last Resort. 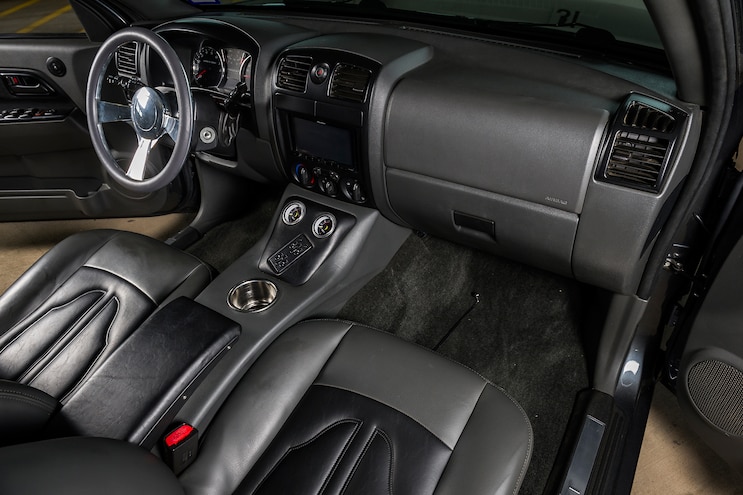 View Photo Gallery | 12 Photos
Photo 5/12   |   05 2005 Gmc Canyon Custom Dash
After leaving one Aftermath picnic, Briggs and his then girlfriend were involved in a wreck that totaled his extended cab. He wanted to just rebuild his truck, but the damage was too extensive to fix it. The hunt was on for another Colorado/Canyon truck to fill the void in his custom lifestyle. View Photo Gallery | 12 Photos
Photo 6/12   |   06 2005 Gmc Canyon Custom Interior
Finally, Briggs found a white GMC Canyon in Las Vegas, Nevada, with an LS2 motor and billets. Tyler had seen this truck being built back in 2007 and 2008 by Bryan Cramlet out of West Virginia with Negative Camber. The truck had been sold and taken to Las Vegas by its owner, Ryan Limbert. 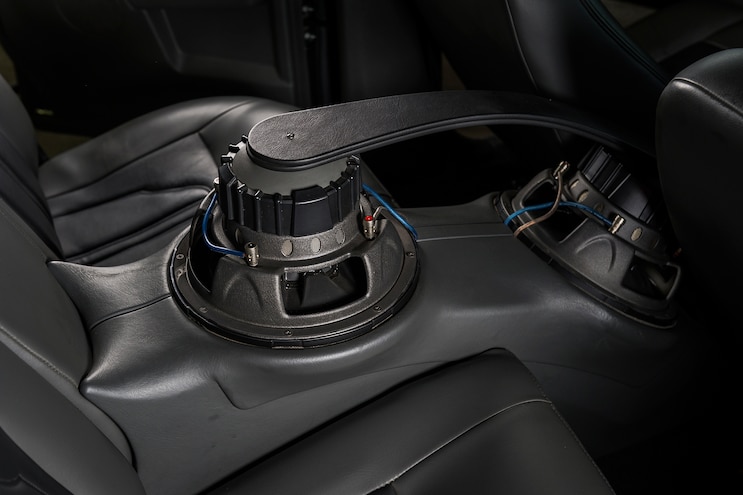 View Photo Gallery | 12 Photos
Photo 7/12   |   07 2005 Gmc Canyon Kicker Cvr Subs
Limbert was selling the truck, so Briggs contacted him and asked a million questions. It sounded like a decent deal to Briggs, and furthermore, it seemed 90 percent of the work was already done. Briggs and his good friend Caleb Chandler drove 26 hours from Texas to Las Vegas on Memorial Day weekend in 2012—a wild adventure to say the least. 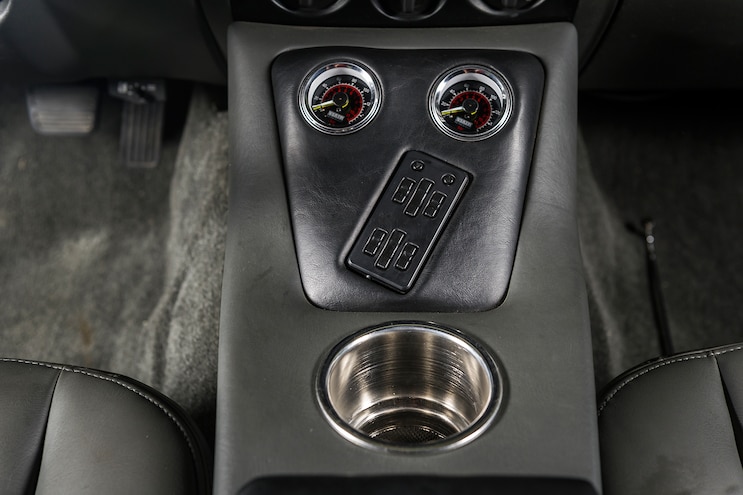 View Photo Gallery | 12 Photos
Photo 8/12   |   08 2005 Gmc Canyon Custom Console
When they finally arrived, however, the truck was not as clean as advertised. It was a mess. The motor ran on 6 cylinders and nothing in the truck worked correctly. The billets were curb checked, and numerous dents spotted the exterior body. Briggs was in shock and had just spent $2,000 in fuel and travel for nothing. He decided to go to lunch to weigh out his options and decided to come back and negotiate a lower price. Needless to say, his offer was accepted. They loaded up the truck and headed back to Houston the next day. 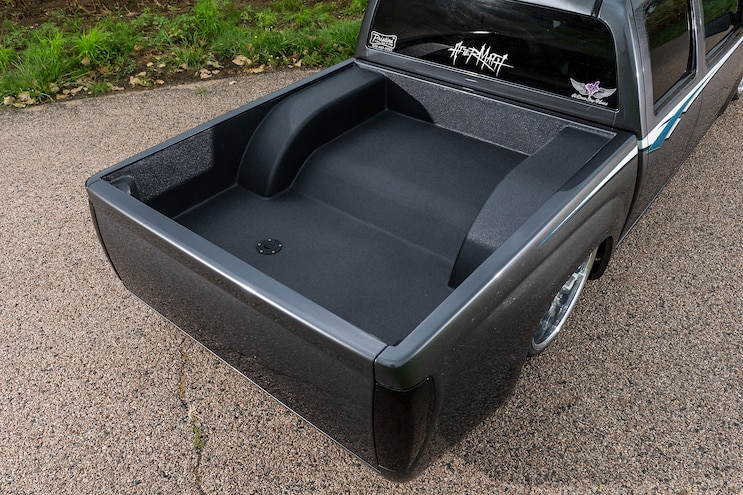 View Photo Gallery | 12 Photos
Photo 9/12   |   09 2005 Gmc Canyon Bed
As soon as they got home, Briggs started tearing everything down to the cab and frame. After 18 months, the truck it was finally done. With nearly everything rebuilt and rewired, Anthony Wilfong with Allstar customs came to the rescue and installed a custom interior and one-off center console. Up next up, a full paint job, including the jams, firewall, core support, and body work from Dave Flint, owner of Pristine Custom Paint. 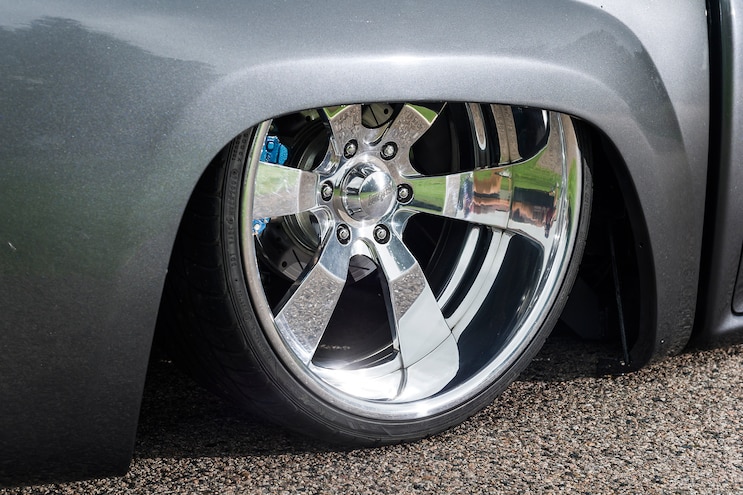 View Photo Gallery | 12 Photos
Photo 10/12   |   10 2005 Gmc Canyon Bonspeed Huntington Wheels
Briggs also made plans to color match the bed liner and headlights before switching out the GMC grille to a Chevrolet Colorado grille. Patrick Maxwell, with Maxwell Auto Design, added a clean pinstripe and graphic to take the truck that extra step. Finally, the truck was the way Tyler had envisioned. Two years later, his fully custom truck was winning “Best of Show” and “Best Truck” left and right. 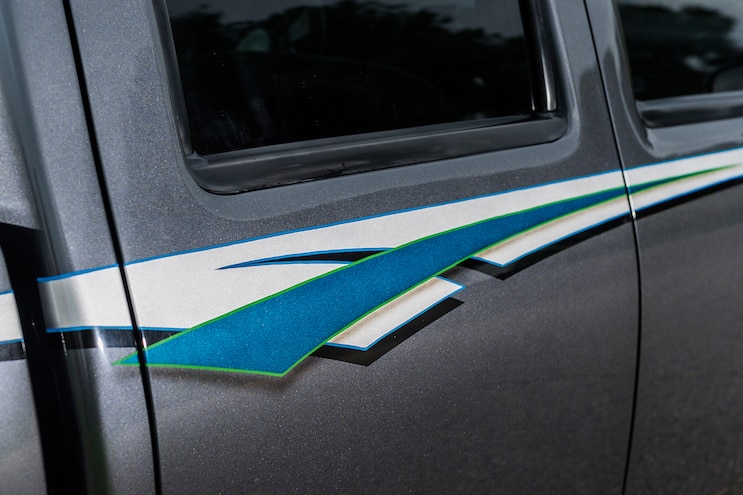 View Photo Gallery | 12 Photos
Photo 11/12   |   11 2005 Gmc Canyon Custom Graphics
Briggs still takes his truck to shows to represent Aftermath proudly– and will continue to as long as he can. Just he started years ago, he still finds himself working with his hands to build and customize just about anything and everything. With this build, Briggs hit this one out of the park. 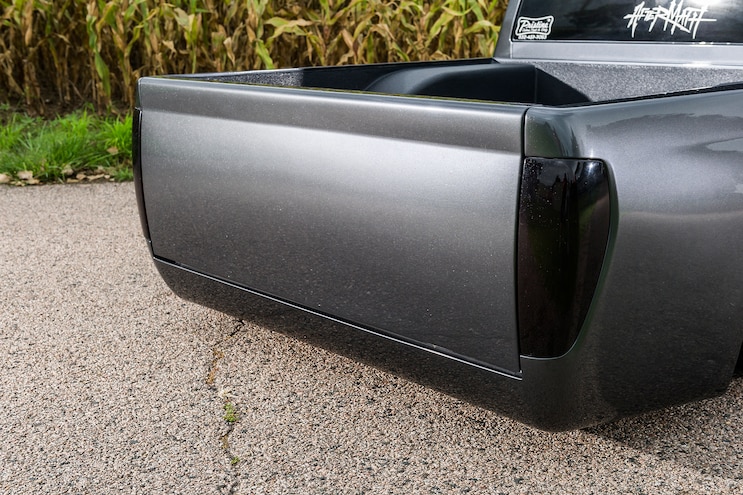