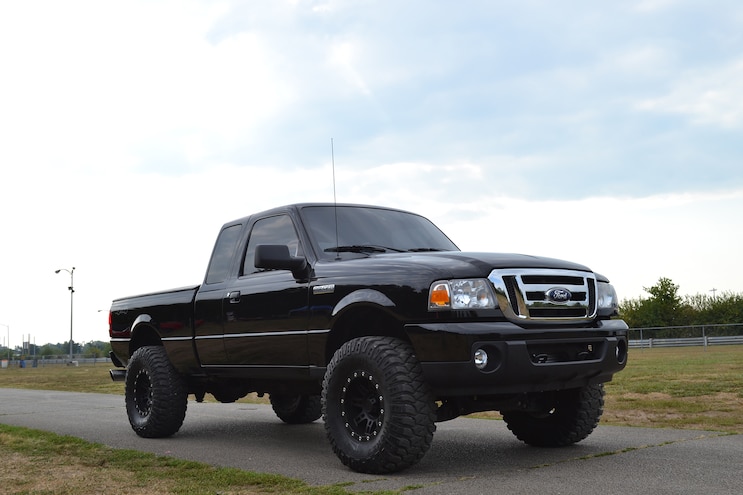 For some truck owners, a pickup is never “perfect.” In their minds, there’s always room for improvement. Garrett Balmer of Sellersburg, Indiana, is a perfect example of that kind of enthusiast.
Not long after Garrett purchased a gas-powered ’11 Ford Ranger (the model with a 207hp V-6 engine) and drove it for a while, the mini-truck left him a bit underwhelmed. He thought the platform could use more power, and he definitely wasn’t happy about the 15 mpg fuel economy the thirsty little engine was giving him. The more Garrett thought about it, the more he wanted to have a diesel powerplant in his Ranger. But it couldn’t be one of the anemic, 80hp oil-burners of the ’80s. Garrett wanted to execute a modern swap to complement his Ranger’s modern looks.
Because of its availability, size, simplicity, and ability to be easily swapped into almost anything, the 3.9L 4BT Cummins engine is exactly what Garrett wanted. It’s compact enough to fit in a Ranger’s frame; it isn’t too long, wide, or heavy; and it has enough potential to outperform the gas V-6—with nearly twice the fuel economy. 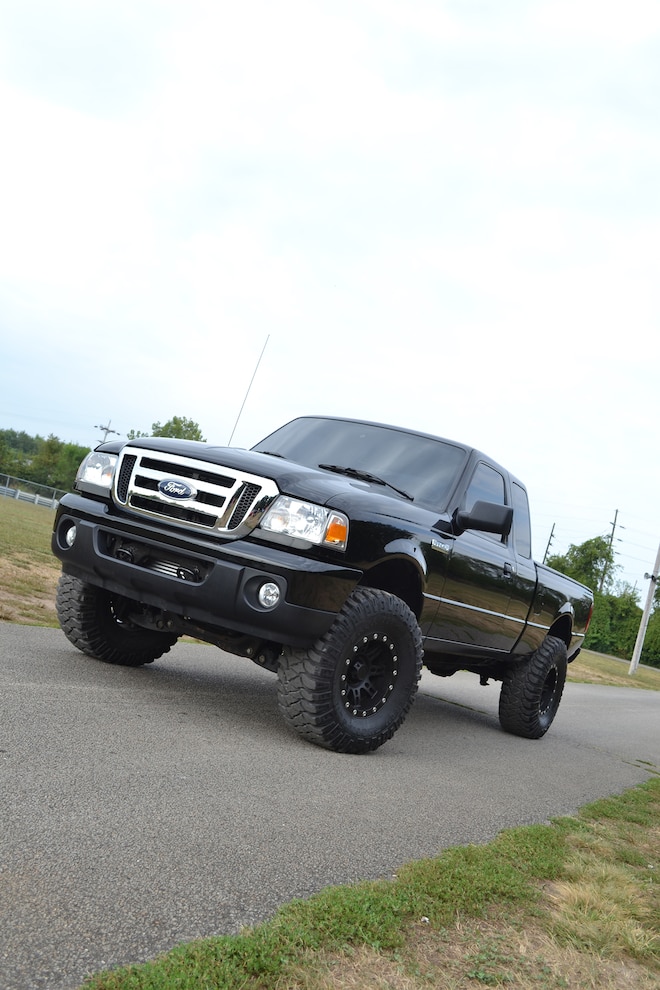 View Photo Gallery | 24 Photos
Photo 2/24   |   002 2011 Ford Ranger Cummins 4BT Three Quarter
At the time, it seemed rather odd for someone to tear into a perfectly good vehicle that only had 20,000 miles on it. But Garrett’s mind was made up; he would own a diesel-powered Ranger—end of discussion.
The four-cylinder Cummins Garrett acquired for his project came from a friend, who got the engine out of an old van. Although it was believed to be a runner, in reality, the little Cummins needed a lot of work and had to be completely rebuilt. With the help of some friends, Matt had the engine bored 0.040 over and fitted with new pistons, ground the crank, and internally balanced the whole assembly. The engine's cracked cylinder head was replaced with a good core, which was fitted with 60-pound valvesprings from Pacbrake, and secured to the block with ARP head studs.
Since 3.9L Cummins engines only make a few ticks more than 100 hp in stock form (depending on the model), Garrett knew his swap engine would need a little bit of help in order to match the 207 hp his Ranger’s original gasser produced. Fortunately, the 4BT had a P-pump, which made modifying the fuel system quite simple. The pump was upgraded with a set of 4,000-rpm governor springs, a BD Diesel Performance #10 fuel plate, and custom delivery valves. The injectors were also replaced with 60hp injectors from Mass Flow Engineering to help increase the engine's power-making potential. 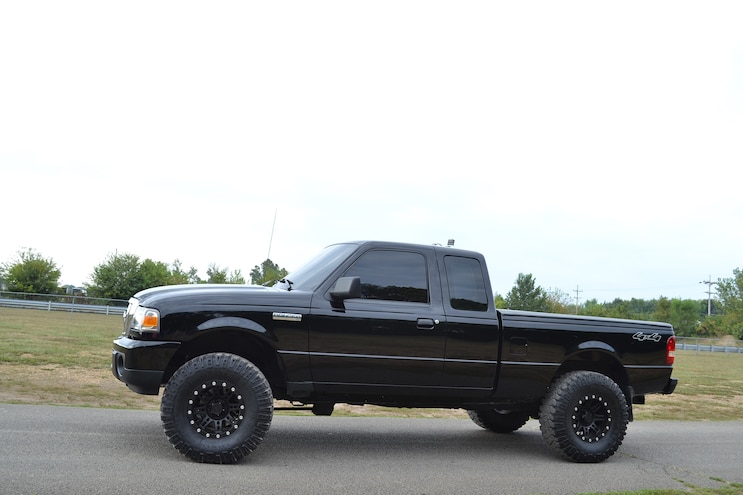 View Photo Gallery | 24 Photos
Photo 3/24   |   003 2011 Ford Ranger Cummins 4BT Side
Airflow throughout the I-4 oil-burner also had to be improved if the fueling upgrades were going to have any chance of adding power. For increased boost, a 54mm Holset H1C turbo from a 6BT engine was adapted to the r4BT, along with a cut-and-welded six-cylinder exhaust manifold. About 30 psi of boost is forced through a CXRacing intercooler and then fed into an individual-runner intake plenum built with help from Scott Campbell and Layne Glass.
Once the engine was rebuilt, there was still the matter of getting everything to fit inside the close confines of the Ranger’s engine bay. Garrett’s father, Roger Balmer, was big a help in getting the modified powerplant squeezed in, using OEM parts wherever possible, as Garrett wanted the truck to remain looking stock. First on the mods list was a 3-inch Performance Accessories body lift, because the engine is simply too tall to clear the firewall and hood. Since the 3.9L diesel is also a lot heavier than the original V-6, Garrett added a set of ReadyLift Suspension’s torsion keys to keep the front end from bottoming out under the extra weight.
The engine and transmission were installed using modified crossmembers and an adapter plate for bolting the Cummins to a Ford ZF5 five-speed manual transmission (from a ’94 F-250). A newer truck’s transfer case was simply too wide for the Ranger’s frame, so, once again, Garrett got creative and made the compact NP205 unit of a ’78 F-250 work in his project. Once Garrett got his little Ranger running, it exceeded all his expectations. The truck gets 25 to 26 mpg during city/freeway driving, and with 208 hp, the diesel is more powerful at the rear tires than the original V-6 was at the flywheel. Torque isn’t even a contest, as the Ranger now has 487 lb-ft, compared to the gas engine’s rating of 238 lb-ft.
With nothing but time and an open road ahead of him, Garrett now drives the Ranger on a daily basis and says he thoroughly enjoyed designing, building, and piloting his version of a diesel-powered mini-truck for the modern age.
Fast Facts:
Year/Make/Model: ’11 Ford Ranger
Owner: Garrett Balmer
Hometown: Sellersburg, Indiana
Odometer: 32,000 miles
Engine: 3.9L Cummins I-4, balanced and blueprinted, and featuring a Colt Stage 2 cam, 60-pound valvesprings, and ARP head studs
Fuel: Mass Flow Engineering 60hp injectors, 4,000-rpm governor springs, custom delivery valves, BD Diesel Performance #10 fuel plate
Air: Holset 54mm HC1 turbocharger, CXRacing air-to-air intercooler, custom individual runner intake
Exhaust: Cut-and-welded Cummins 6BT manifold, ’99 Ford F-250 downpipe, and 3.5-inch tubing into a 5-inch tip
Transmission: Ford ZF5 five-speed manual transmission, factory replacement clutch, Ford NP205 transfer case
Horsepower: 208 hp
Torque: 487 lb-ft
Wheels: 15x9 Pro Comp
Tires: 33x12.50R15 Mickey Thompson Baja MTZ
Fun Fact: Garrett based his build on a yellow 4BT-powered Ranger that was featured in a 2008 issue of Diesel Power! 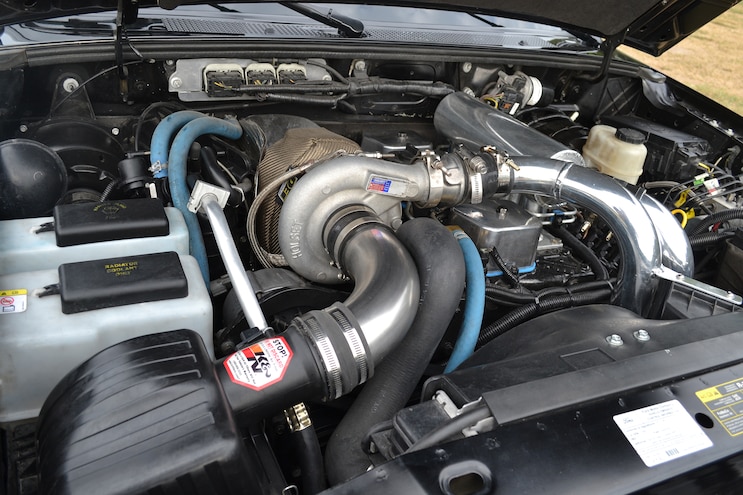 View Photo Gallery | 24 Photos
Photo 4/24   |   004 2011 Ford Ranger Cummins 4BT 4bt Cummins
Many people are surprised to see a 4BT Cummins engine residing where a V-6 used to be when Garrett Balmer pops his ’11 Ford Ranger’s hood. The 3.9L diesel outpaces the original gas engine in both horsepower and torque, with a dyno-proven 208 hp, along with an impressive 487 lb-ft. 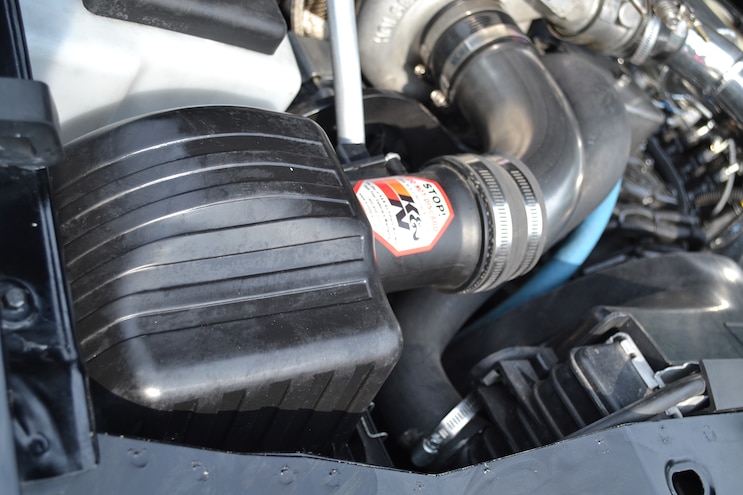 View Photo Gallery | 24 Photos
Photo 5/24   |   005 2011 Ford Ranger Cummins 4BT Ranger Airbox
Garrett integrated factory parts into his build whenever he could. Part of the reason why the install looks so clean is because Garrett adapted the original V-6 airbox to feed the diesel engine, which now flows directly into the turbocharger. 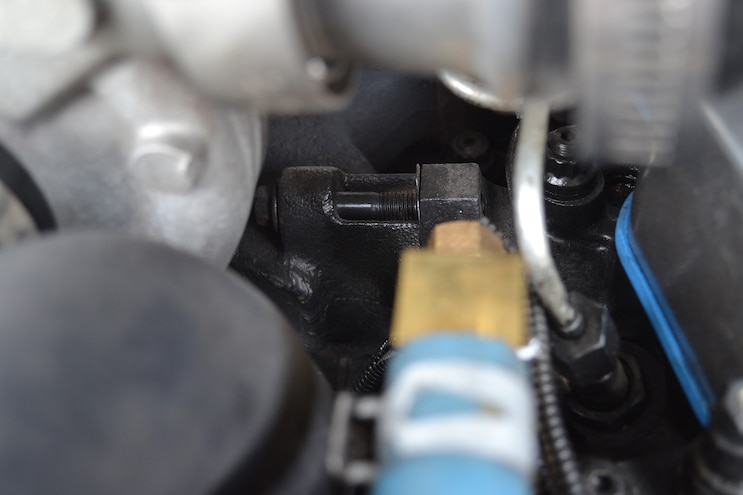 View Photo Gallery | 24 Photos
Photo 6/24   |   006 2011 Ford Ranger Cummins 4BT Exhaust Manifold
There wasn't enough space to mount a turbo low on the engine, so a flipped and cut Cummins 6BT exhaust manifold was used to help fit in the boosted engine between the Ranger's front fenders. 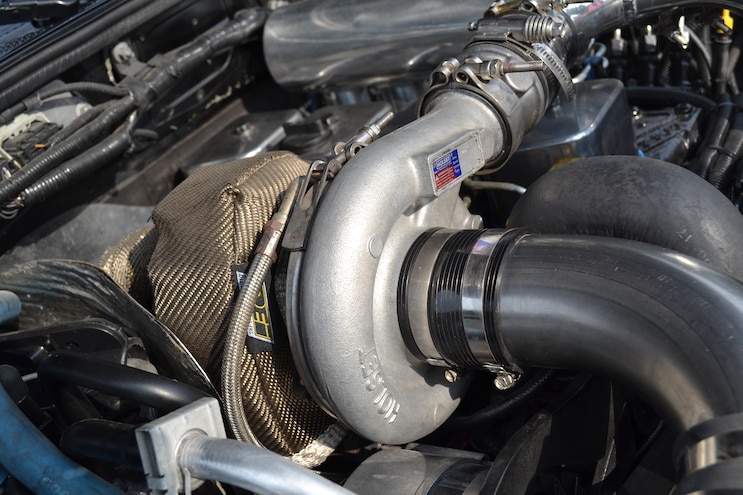 View Photo Gallery | 24 Photos
Photo 7/24   |   007 2011 Ford Ranger Cummins 4BT Hc1 Turbo
Holset HC1 turbochargers were factory installed on ’89-to-’93 six-cylinder Cummins engines. However, Garrett was able to make one work on his four-cylinder powerplant by increasing its rpm range and installing a tighter exhaust housing on the turbo. 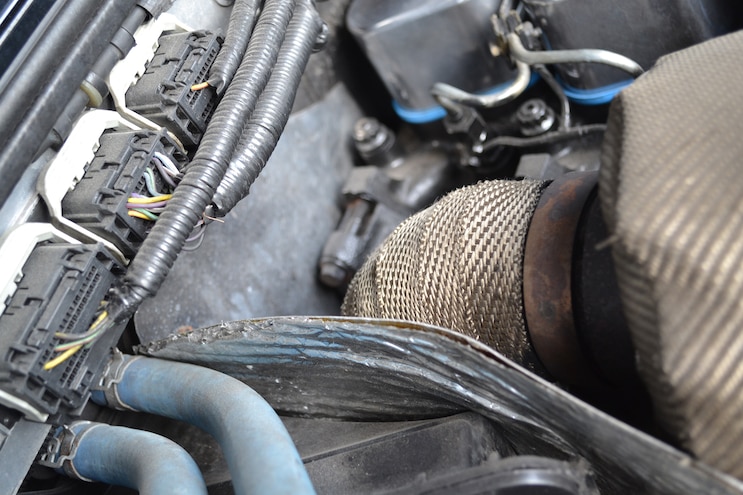 View Photo Gallery | 24 Photos
Photo 8/24   |   008 2011 Ford Ranger Cummins 4BT Downpipe
Another example of the hodgepodge of parts needed to make the swap work is this downpipe, which is normally found on a ’99-to-’03 7.3L Ford diesel engine. The bend was tight enough to work within the confines of the Ranger, and the heat-wrapped exhaust just barely clears the firewall. 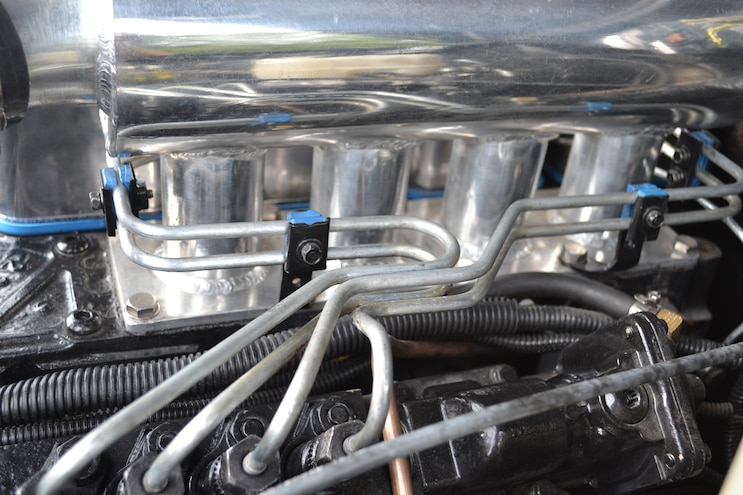 View Photo Gallery | 24 Photos
Photo 9/24   |   009 2011 Ford Ranger Cummins 4BT Intake And Injector Lines
One of the coolest parts on the engine build is this individual-runner intake manifold Garrett and his friends built. He reports that making the switch from a stock log-style manifold to the custom piece resulted in the engine making approximately 10 additional horsepower at the rear wheels. 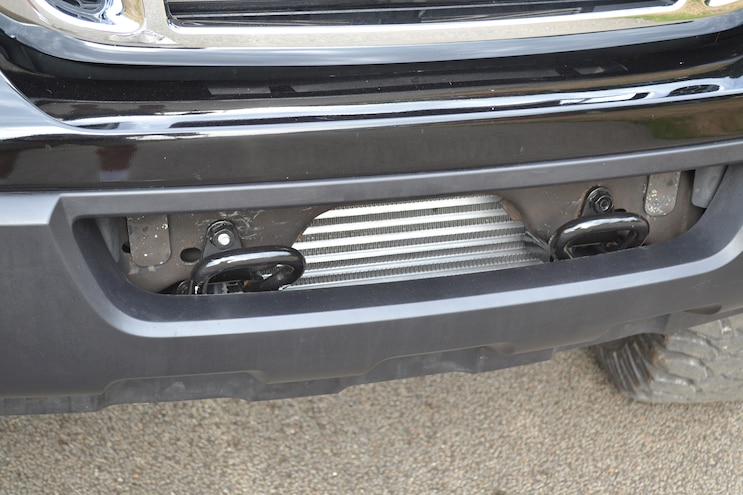 View Photo Gallery | 24 Photos
Photo 10/24   |   010 2011 Ford Ranger Cummins 4BT Intercooler
If you're wondering whether the truck has an intercooler or not, it does. It's a long and low CXRacing piece that’s mostly hidden under the front bumper. 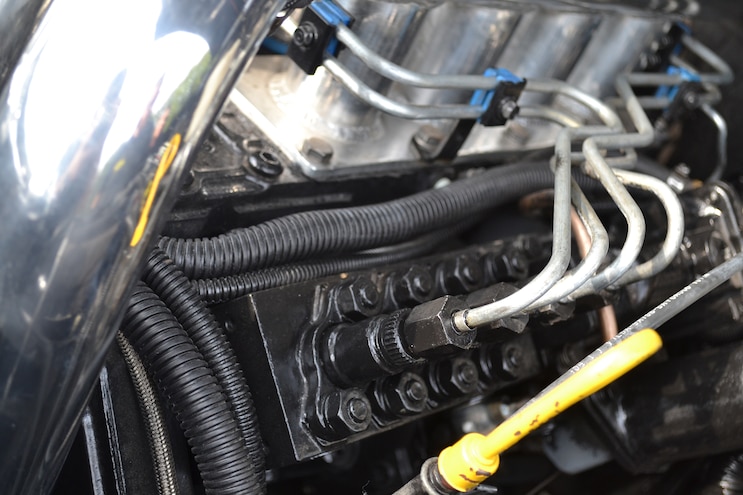 View Photo Gallery | 24 Photos
Photo 11/24   |   011 2011 Ford Ranger Cummins 4BT P Pump
Garrett was fortunate enough to pick up an engine with a four-cylinder P-pump, on which all the same proven upgrades for 12-valve P-pumps could be applied. The pump was fitted with 4,000-rpm governor springs, custom delivery valves, and a BD Diesel Performance #10 fuel plate. The injector lines that wrap around the intake are factory units designed for engines that have an intercooler incorporated in the intake. 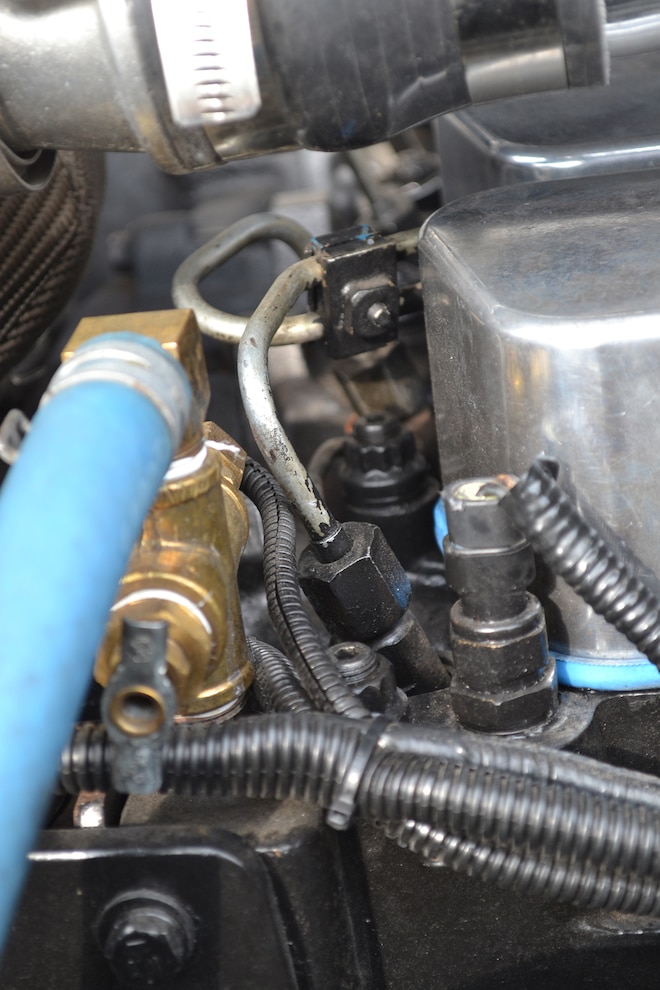 View Photo Gallery | 24 Photos
Photo 12/24   |   012 2011 Ford Ranger Cummins 4BT Injectors
One of the main reasons why the 4BT’s power is double the output of a stock engine is the addition of lots of extra fuel, made possible by a set of custom 60hp injectors from Mass Flow Engineering. 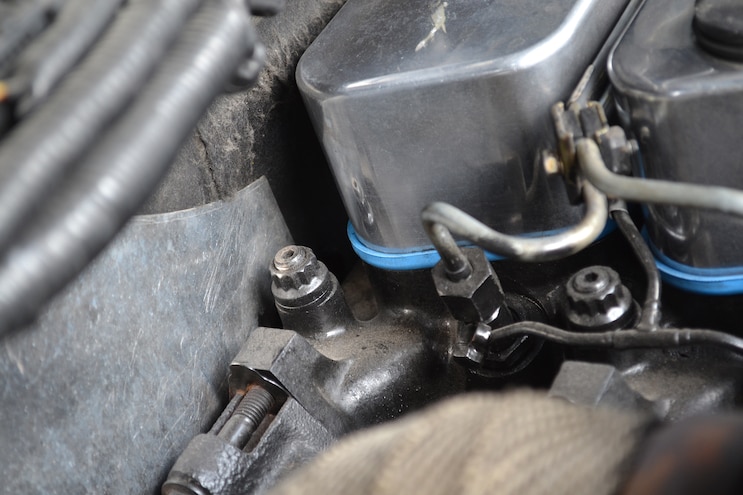 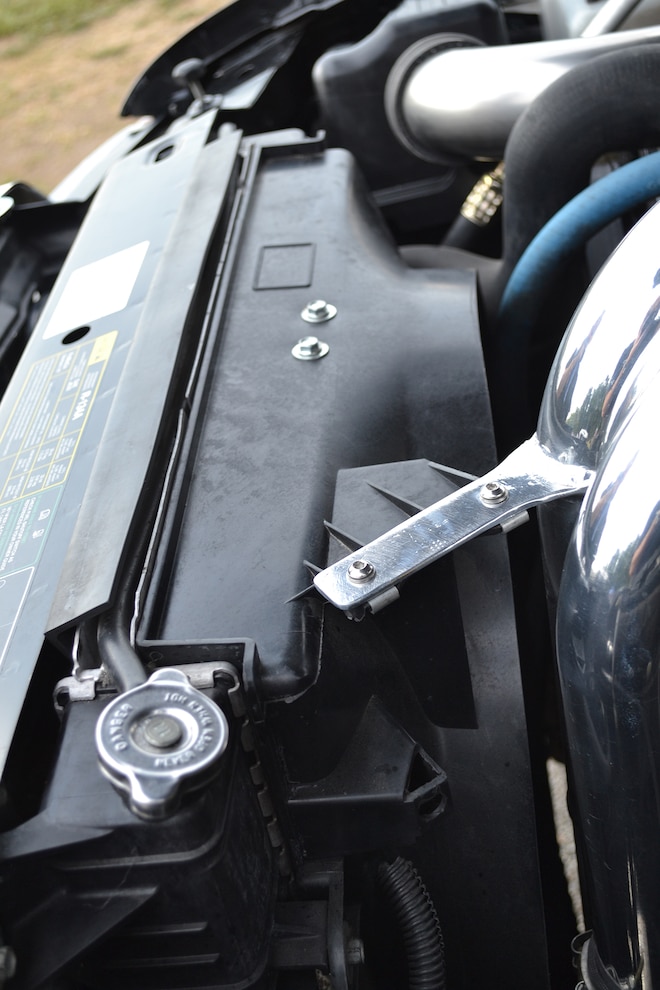 View Photo Gallery | 24 Photos
Photo 14/24   |   014 2011 Ford Ranger Cummins 4BT Radiator
One of the Ranger’s original components that Garrett elected to use with the 3.9L Cummins is the cooling system, which has proven itself to be more than enough to keep the engine’s temperature in check. 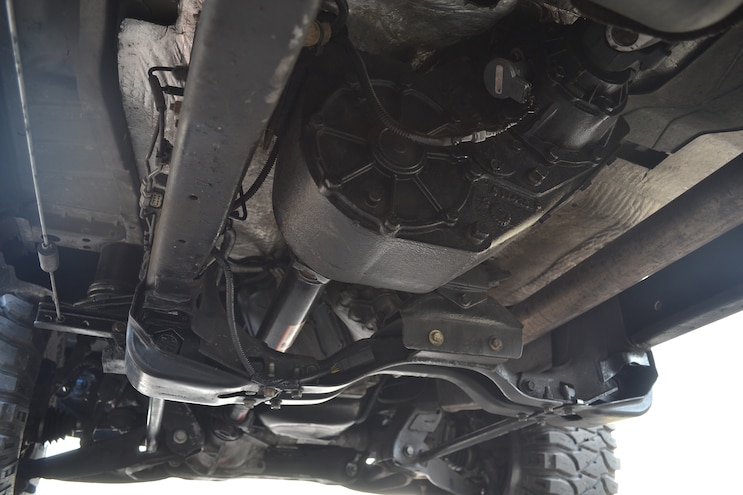 View Photo Gallery | 24 Photos
Photo 15/24   |   015 2011 Ford Ranger Cummins 4BT Transfer Case Front Axle
The narrow NP205 transfer case of a ’78 Ford F-250 was used to clear the Ranger's frame and sends power fore and aft. Also visible from the bottom are the torsion keys, which are used to stiffen up the front suspension, as well as body spacers that give the truck an extra 3 inches of lift. 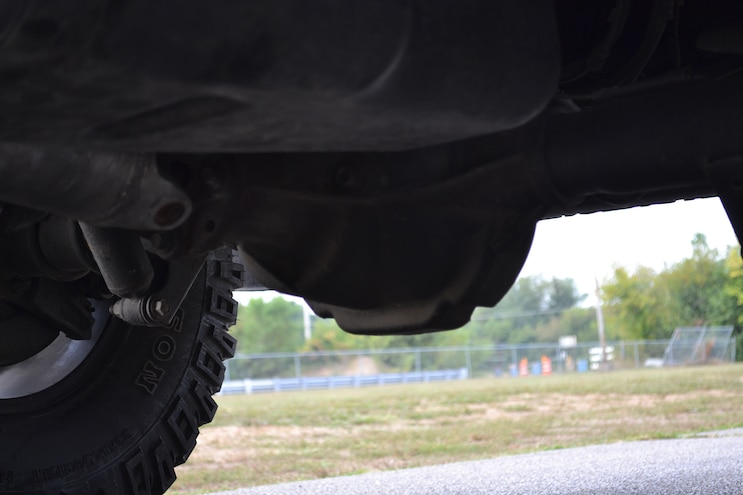 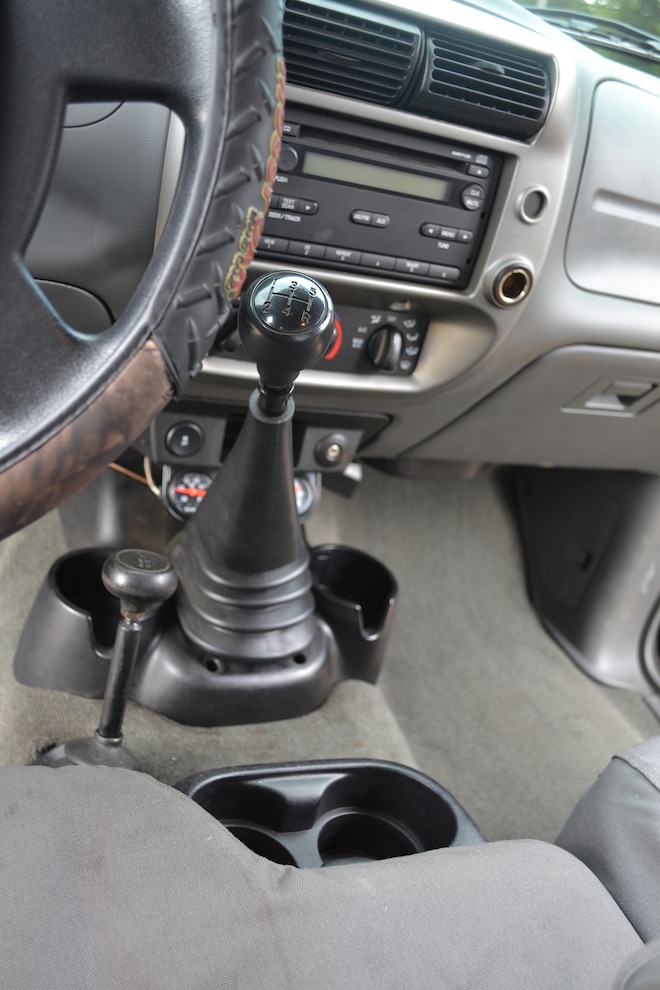 View Photo Gallery | 24 Photos
Photo 17/24   |   017 2011 Ford Ranger Cummins 4BT Manual Transmission
A Ford ZF5 five-speed manual transmission is mated to the Cummins and uses a small-block Ford stock clutch, which somehow holds up, despite being way past its torque limit. 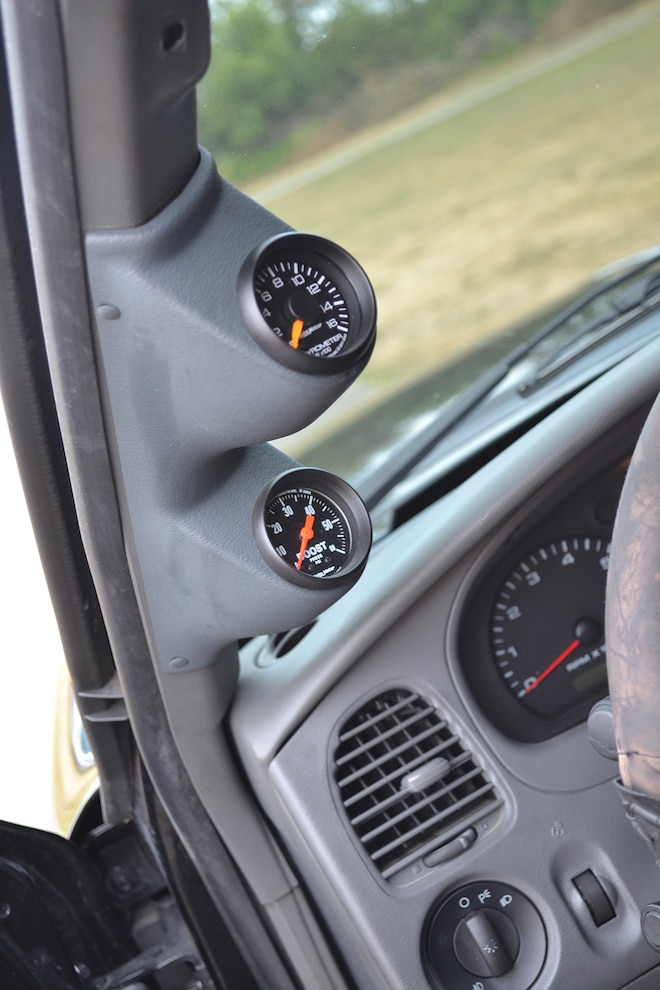 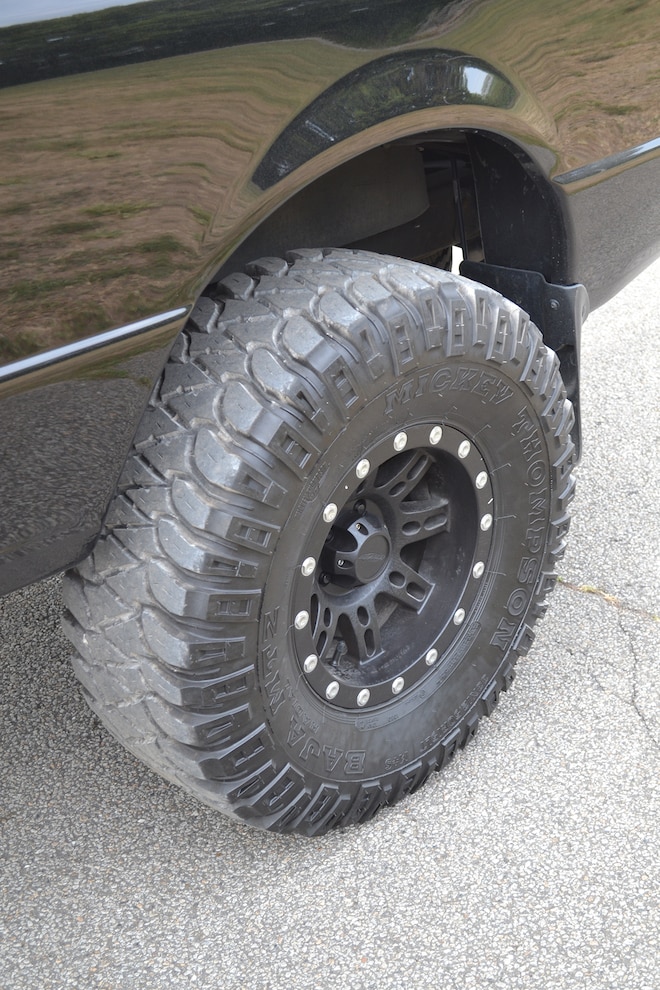 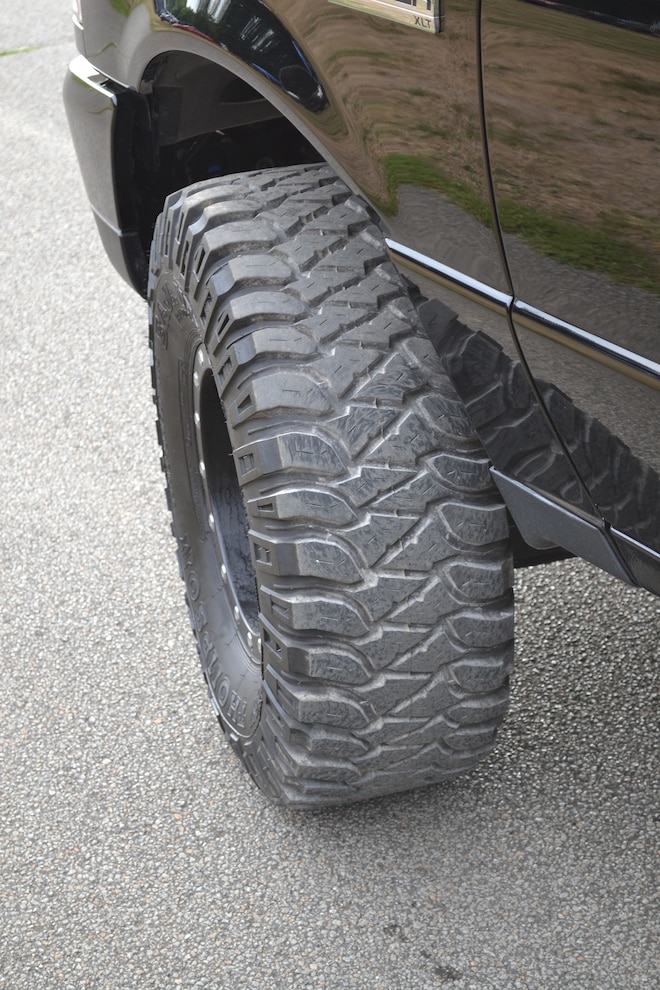 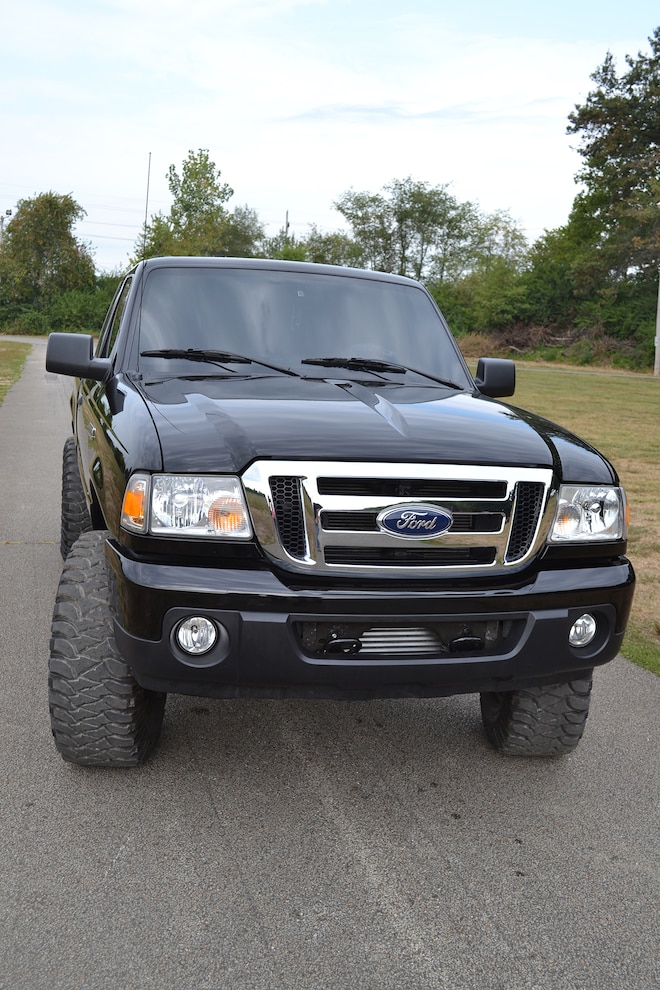