A 2015 Ram EcoDiesel with a Compound Turbo Punch 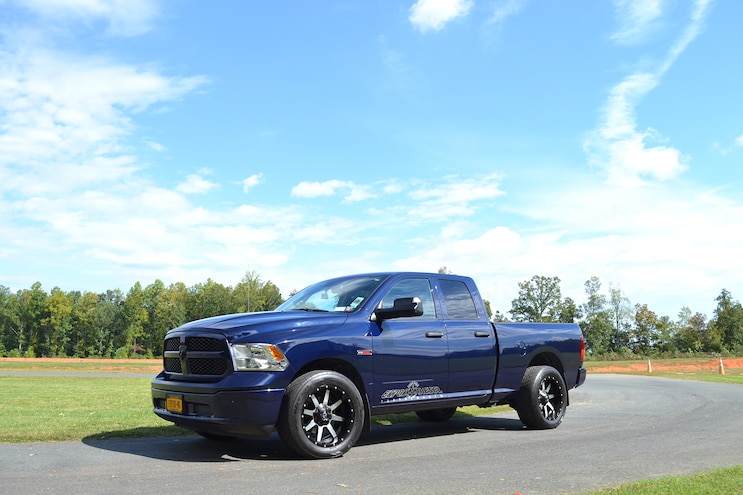 For many years prior to 2014, one of the biggest questions among truck enthusiasts everywhere was, “Which manufacturer is going to be the first to produce a diesel-powered ½-ton pickup?” Would it be Ford? Chevrolet? GMC? No, it actually ended up being Ram, with its wildly popular ’14 Ram 1500 EcoDiesel.
The heart of the Ram’s small oil-burner is a 240hp 3.0L EcoDiesel V-6 engine, which, at the time, was already being used in some Jeep Cherokee models. The torquey powerplant was able to move the Ram 1500 at a decent rate, but it was hardly a hot rod. And, in dyno tests, the EcoDiesel 1500 put down a respectable 202 hp, which isn't bad by any standards. However, we expected more could be gained in the power department by turning up the wick a little.
Ryan Esposito, owner of Espos Diesel in Plattsburgh, New York, decided to do just that. Since it appeared no one was trying to seriously hop up an EcoDiesel, he wanted to be the person who did. After some searching, Ryan purchased a True Blue ’15 Ram 1500 EcoDiesel to use specifically for accomplishing that goal.
“When I bought it, it felt like the 1500 diesel should be a lot faster,” he says. “The platform was pretty stout and it had a strong rear axle and the transmission from the 395hp Hemi-powered Ram, so it seemed like it would be a good candidate for a build.”
Fortunately for Ryan, calibrators at Louisiana-based PPEI Tuning had already been tinkering with EcoDiesels and offered a PCM calibration that could give the 3.0L engine a good boost in power. During initial testing, the engine responded by putting down nearly 300 hp on a chassis dyno, which is a very healthy 100hp increase over stock. But Ryan wanted more.
“I felt that when the engine was turned up, its efficiency was down,” Ryan says. He installed boost and exhaust pressure gauges and was seeing a scary 60 to 70 psi of backpressure at only 28 psi of boost. “The factory turbo is only a 41mm unit, and it was clear it was working too hard.” In addition to the backpressure numbers, Ryan was also seeing 1,400 degree EGT readings, which definitely meant towing could only happen with the tuner adjusted to lower settings.
Determined to push the EcoDiesel performance envelope even further, Ryan decided to make the switch to compound turbochargers. Without changing the tuning, he began fabricating the piping for his first EcoDiesel compound turbo kit. The large turbo features a billet 63mm compressor wheel from SunCoast Diesel Transmissions (yes, transmission guys made a turbocharger compressor wheel) for more airflow, but Ryan also concentrated on the exhaust side, with a 40mm Turbosmart wastegate and Tial stainless steel housing. The goal was to develop a bolt-on kit that manages exhaust backpressure and has a more horsepower-oriented, 1:1 boost-to-backpressure ratio.
With high-quality parts and a well-designed turbo setup in place, all that remained for Ryan was to prove his theory actually works. After making some adjustments to the wastegate, he reports seeing 55 psi of boost (up from 28 psi) with 60 psi of drive pressure. The extra air also results in extra performance, as the Ram gained another 100 hp, peaking at an even 400 hp and impressive 600 lb-ft of torque.
Other than the extra fuel and air, the engine and transmission still remain stock, which is a testament to the 1500’s engineering. Towing with the compound setup was a complete success, dropping foot-to-the-floor EGT from 1,400 degrees (and climbing) to a steady-state 1,100 degrees—even on the hottest setting. Is Ryan happy with how his compound-turbocharged Ram 1500 turned out? You bet he is! He says he can finally drive the truck everywhere without worrying about exhaust temperatures—with double the power of a stock engine. It definitely looks like ½-ton diesel performance has finally arrived, and its future appears to be very promising.
Fast Facts:
Year/Make/Model: ’15 Ram 1500 EcoDiesel
Owner: Ryan Esposito
Hometown: Plattsburgh, New York
Odometer: 20,000 miles
Engine: VM Motori 3.0L V-6 EcoDiesel
Fuel: Custom calibration by PPEI Tuning
Air: Custom air intake with Banks Power intake manifold, AFE intercooler tubes, and an Espos Diesel 63mm/41mm compound-turbocharger system
Exhaust: Custom 3.5-inch exhaust with a 4-inch MBRP tip
Transmission: Factory 8HP70 eight-speed automatic
Horsepower: 400 hp
Torque: 600 lb-ft
Tires: 305/50R20 Nitto 420S
Wheels: 20x10 Fuel Maverick
Suspension: Stock
Axles: Stock
Exterior: Stock
Fun Fact: Despite Ryan driving with a heavy foot most of the time, his Ram still manages to get about 25 mpg combined. 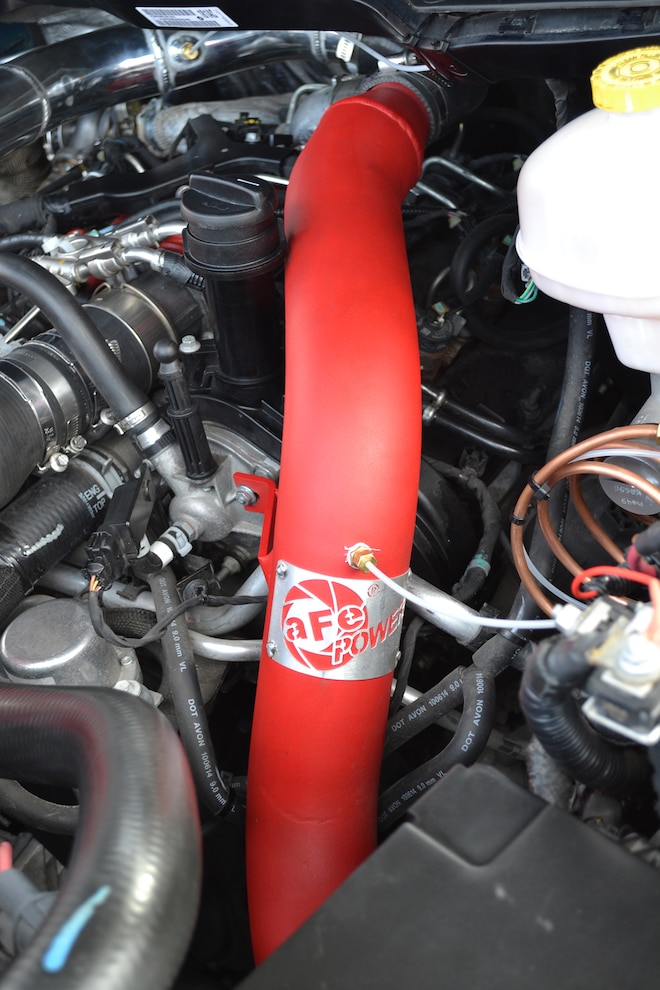 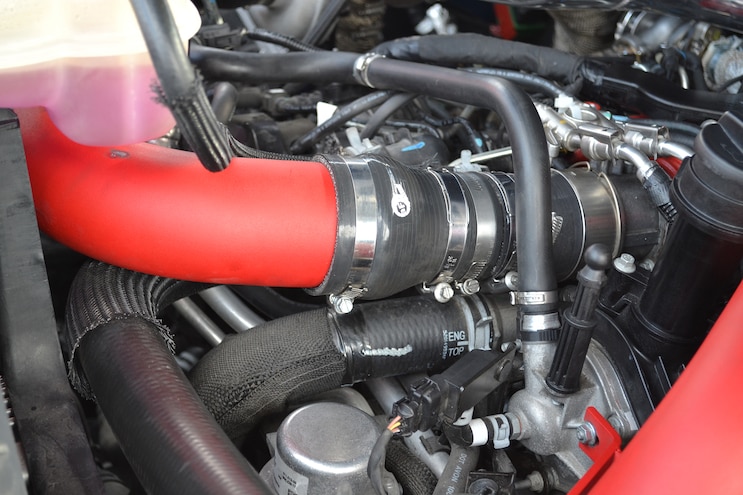 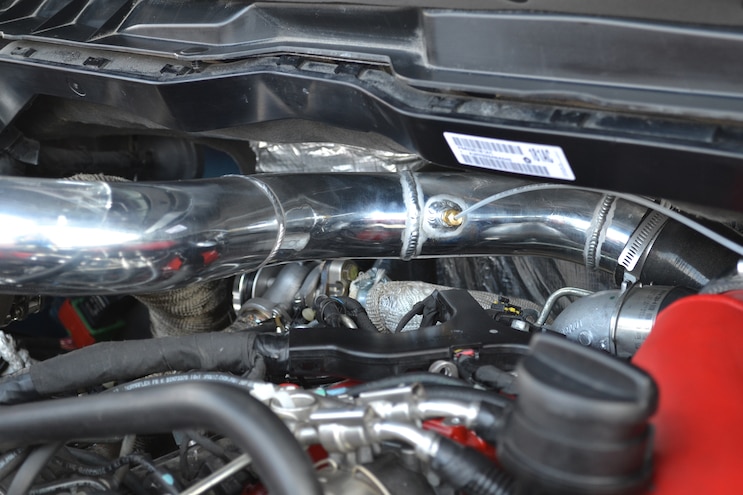 View Photo Gallery | 18 Photos
Photo 4/18   |   004 2015 Ram 1500 Ecodiesel Small Turbo
The smaller turbocharger on the EcoDiesel engine is a factory 41mm unit, which is more than capable at stock power levels. However, the smaller turbo runs out of juice at about 300 hp. 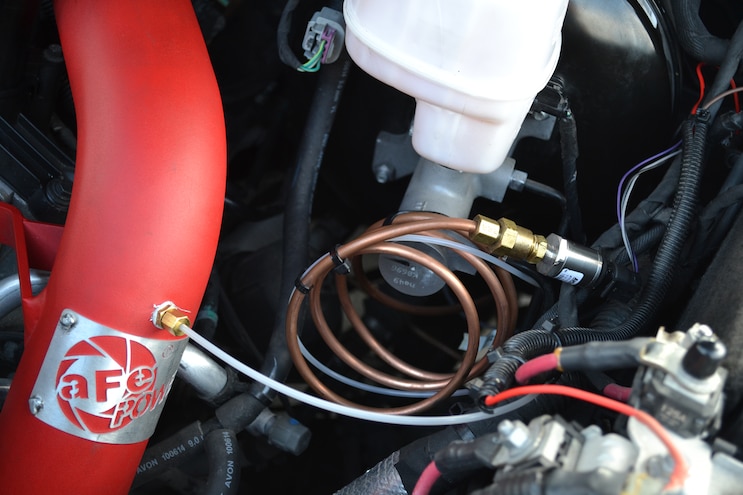 View Photo Gallery | 18 Photos
Photo 5/18   |   005 2015 Ram 1500 Ecodiesel Drive Pressure
This looped copper line is used to measure exhaust backpressure, which was initially a whopping 60 to 70 psi (at 28 psi of boost) with the factory turbo. According to Ryan, the only solution was to add a second, larger turbo that would compound boost pressure into the engine. 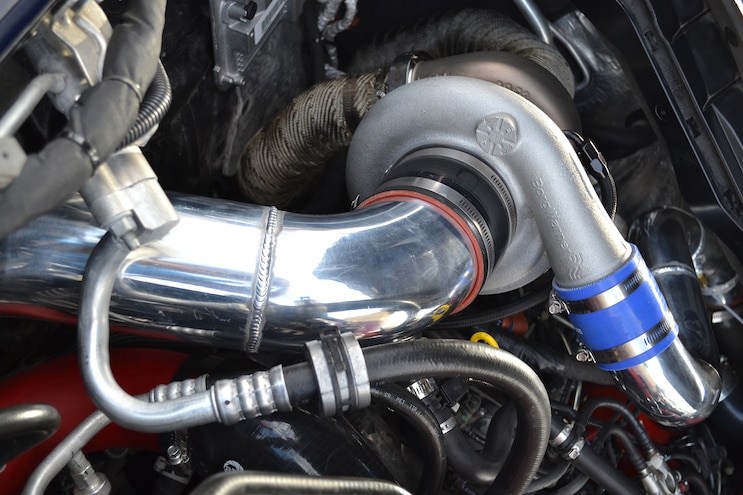 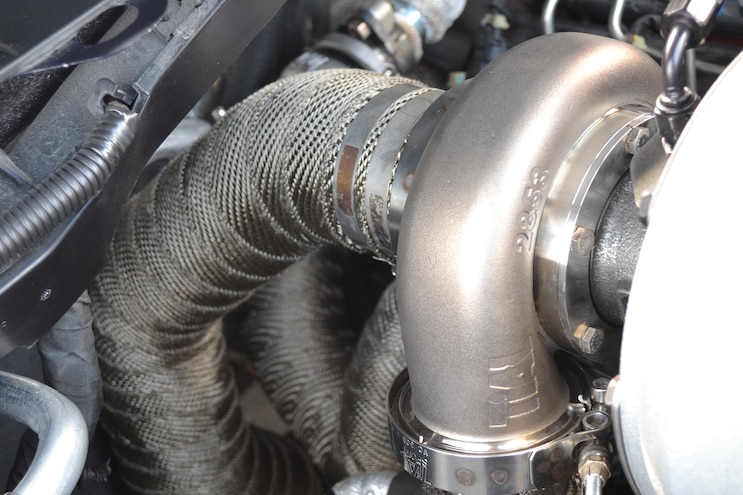 View Photo Gallery | 18 Photos
Photo 7/18   |   007 2015 Ram 1500 Ecodiesel Tial Housing And Wastegate
Ryan did a lot of work to the exhaust side of his compound arrangement. To reduce exhaust backpressure, a 40mm Turbosmart wastegate was incorporated into the build. The ’gate sends exhaust directly to the larger 63mm turbo. Stainless-steel exhaust piping is used throughout the system, along with a Tial stainless exhaust housing. 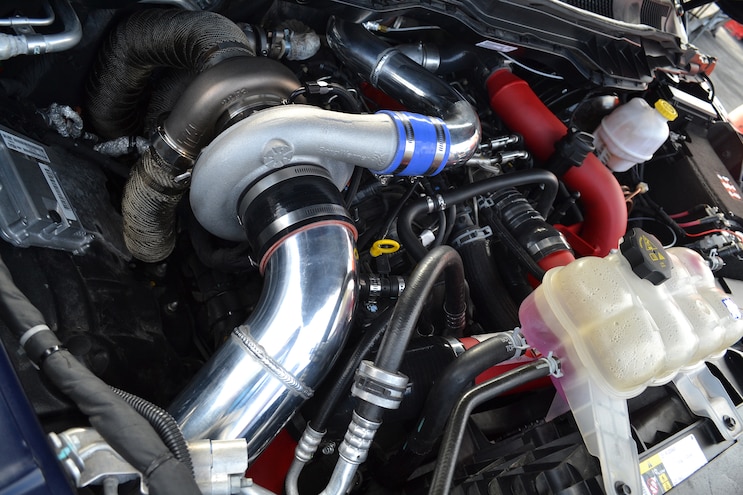 View Photo Gallery | 18 Photos
Photo 8/18   |   008 2015 Ram 1500 Ecodiesel Engine
With custom calibration done by PPEI Tuning and a TIG-welded aluminum intake, the Ram’s 3.0L V-6 makes 400 hp—twice the amount of stock EcoDiesels. Ryan says he's looking at turning his setup into a bolt-on kit so other owners can double their engines’ power as well. 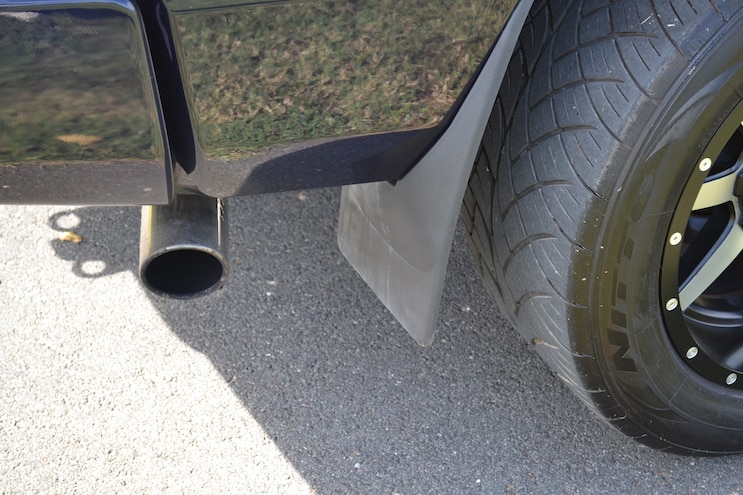 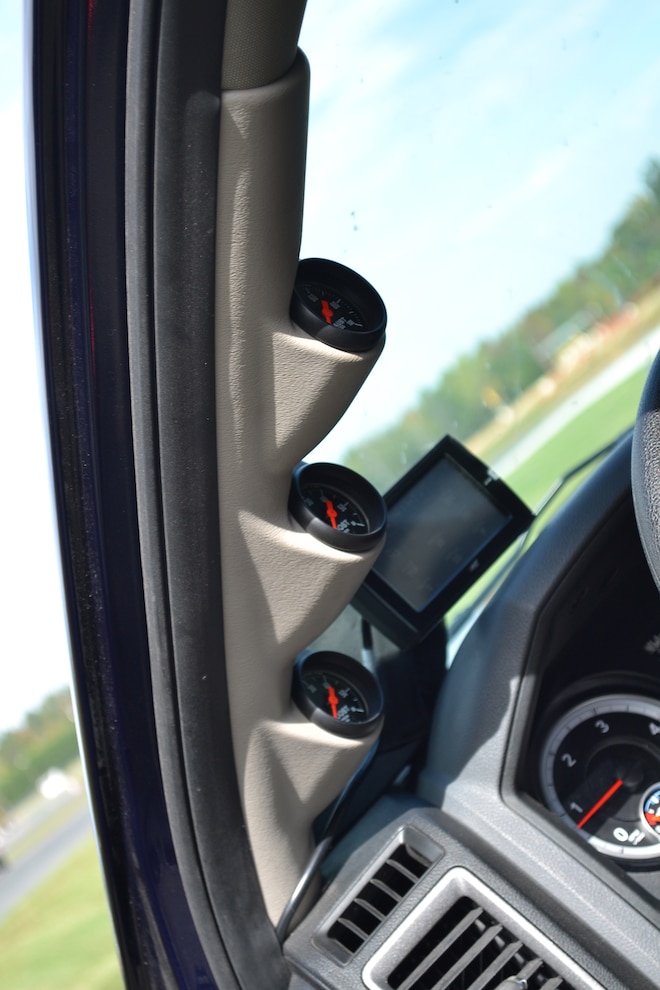 View Photo Gallery | 18 Photos
Photo 10/18   |   010 2015 Ram 1500 Ecodiesel Gauges
A complement of Auto Meter gauges along with an Edge Products CTS programmer gives Ryan all the information he needs to tune his EcoDiesel. 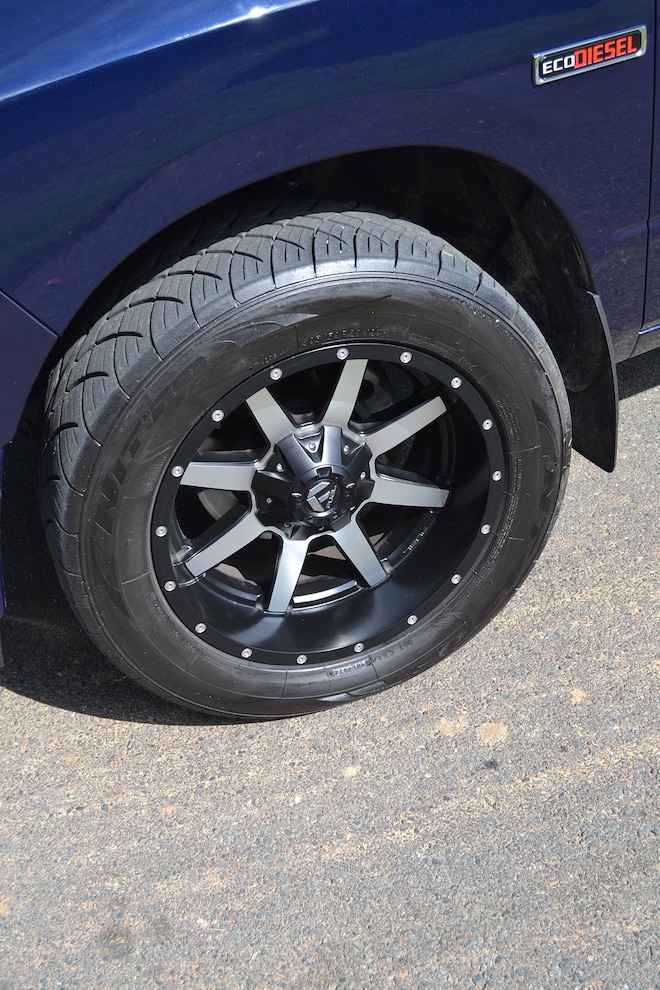 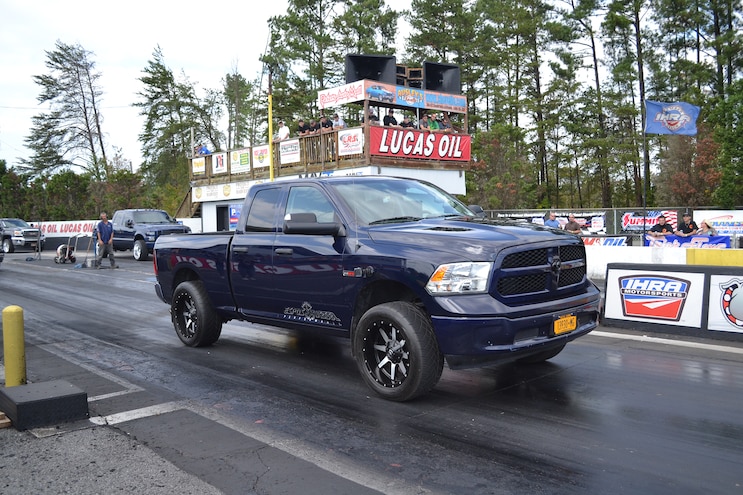