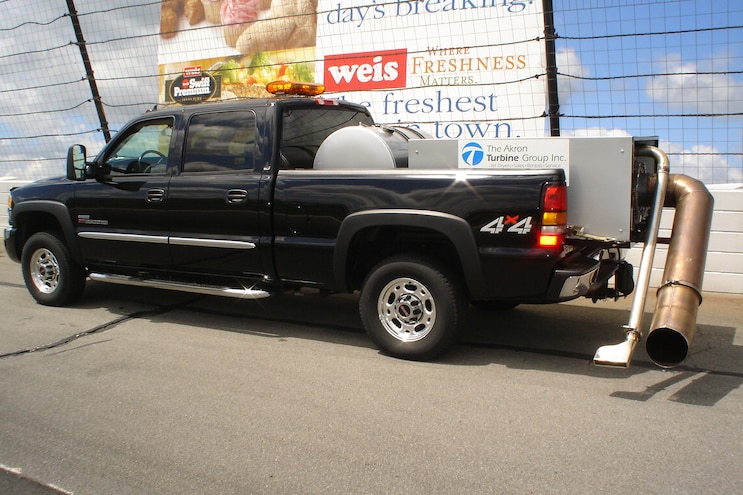 “You ready?” Tim Arfons asked. Suddenly, the world around us began to swirl, accompanied by the loud, high-pitched whirring sound of a jet airplane that made me feel like it was in my back pocket and we were in the center of an F1 tornado. Leaves and ground debris flew sideways through the air in a large radius and the Ford F-250 vibrated on its wheels. Tim cautioned, “Don’t get out of the truck!” When I asked why, he laughed. “You’d get blown across the river!” he explained, pointing off to the distance. 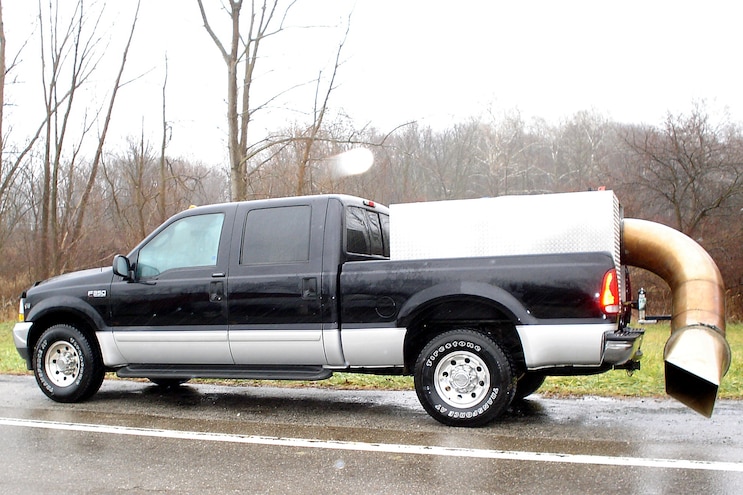 View Photo Gallery | 21 Photos
Photo 11/21   |   Akron Turbine Group Tim Arfons Jet Dryers 002
I was in the rural outskirts of Akron, Ohio, with Tim “Turbo” Arfons, testdriving one of his work trucks: a Ford Super Duty with a jet-powered track dryer strapped into the bed. The bones of the track dryer is a General Electric CJ610 Business Jet engine that produces 3,000 pounds of thrust operating at 80 percent, sending out air at up to 600 mph—“just under supersonic,” explained Tim. That said, I was happy to watch safely ensconced in the pickup’s cockpit!
The son of legendary, three-time land speed record holder Art Arfons, Tim cut his teeth in the speed business. His playground was his dad’s garage, where he became adept at sorting bolts, reading engine manuals, and learning from the ground up about machines and motors. He was nine when his Dad broke the land speed record. “He had a jet car and gave me a mini-bike,” Tim reminisced with a chuckle while giving me a tour of his dad’s shop that has been a part of his life for five decades. “My dad was a genius and ahead of his time. 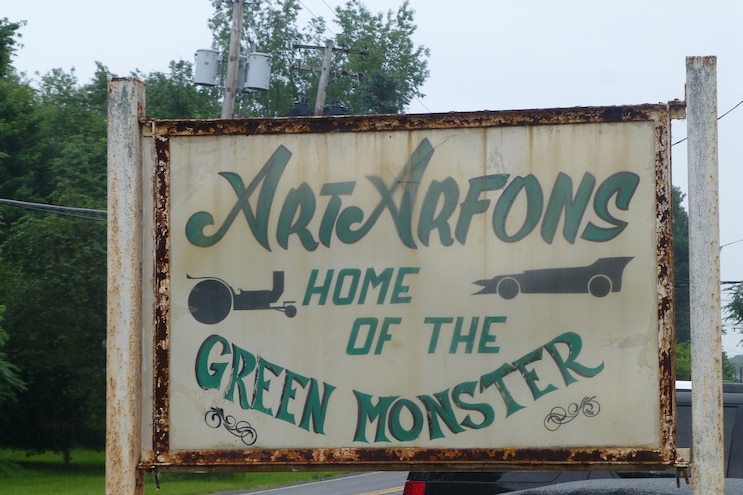 View Photo Gallery | 21 Photos
Photo 12/21   |   Akron Turbine Group Tim Arfons Jet Dryers 007
“I didn’t think I’d be in the same shop for 50 years,” said Tim, who is humble and works out of a modest and unpretentious small compound of buildings that could serve as an automobile museum with artifacts, photos, and memorabilia from his dad’s and his own careers. The workshop’s rich aroma of fuels, oils, and metals makes a potent and appealing blend, especially when mixed with the slightly musty smell of books, prints, posters, and papers that are collected on walls, desktops, and in glass cases, rather than stored. Dozens of jet engines litter the shop in all sizes and configurations and top out with a cruise missile engine; it’s an automotive historian’s and enthusiast’s dream garage. There’s even a General Electric T258 jet engine on Tim’s mailbox that is posted along the roadway in front of his shop. It’s the same engine Tim used in his dragster, in which he just posted a speed of 201 mph (although the speed demon has gone faster!)
Tim started out on the dragstrip, driving his Green Monster Camaro and Starfire funny cars. The stunt driver, whose wife asked him to give up racing when his son TJ was born, has now spent 40 years designing, building, and servicing jet engines. A wiz in the arena of power, electricity, and making motors work, Tim uses jet engines for things that “fly” on the ground, having turned his passion to jet engines and putting them in everything he could—from a bar stool with a JFS 100 jet engine that he ran to a top speed of 43 mph on a eighth-mile track (and a 50-mph top speed) to unique and crazy jet-powered quad racers. It’s no surprise that the expert is called frequently with questions on jet engines. 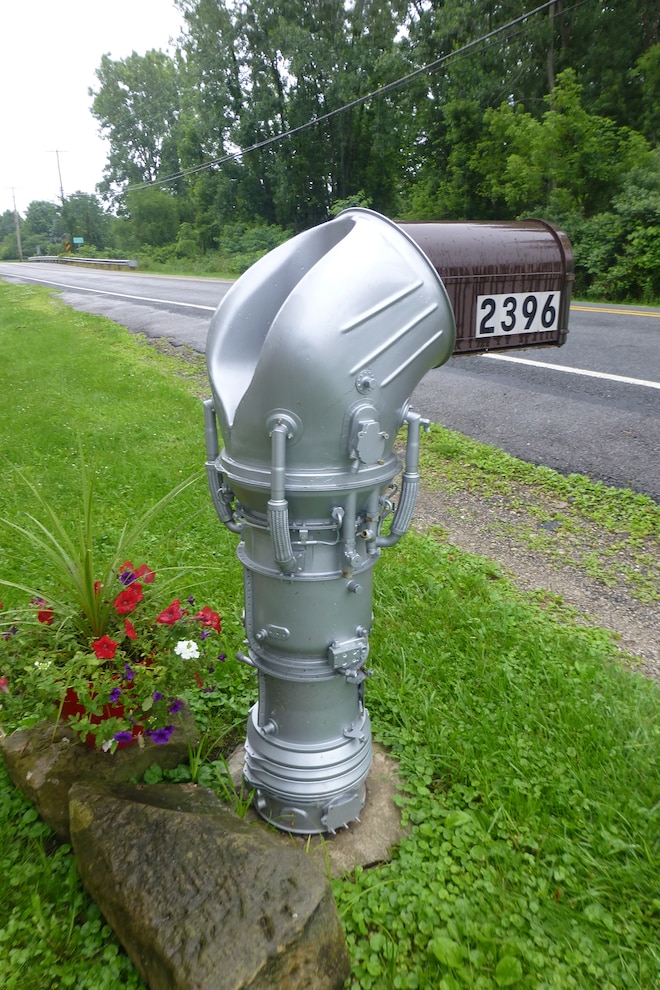 View Photo Gallery | 21 Photos
Photo 13/21   |   Akron Turbine Group Tim Arfons Jet Dryers 006
“This wasn’t life-threatening stuff,” Tim enthused, downplaying his years of competition. “Just the broken bones kind of stuff.” The reference is to a crash in France, when he was motoring a jet-jumper that had the range to clear 15 cars. Tim flew over 14½ and broke a number of bones and separated his shoulder—one of two “spectacular” crashes Tim survived. The small jet-powered vehicle was launched by a catapult. “It was like launching off an aircraft carrier, with a 20-foot length of rope that stretched like a rubber band,” Tim described. “The ramp had a 500hp turbine engine that propelled the cable. It was fine for jumping 10 cars, but my ego got to me and, wanting to do more, I tried 15. I should have stayed at 10!”
That was when Tim moved to the jet dryers. “The jet dryer was around and many dryers were made from extra engines racers had at home,” Tim said. “I didn’t invent them, but after getting calls to work on other people’s stuff, I decided to make my own, perfect it, and start the Akron Turbine Group.” Today, Tim is known around the globe for his work. He sells and rents his jet-powered track dryers for use at dragstrips and speedways throughout North America. He currently owns two Super Dutys that are his favorite trucks for setting up his dryers; both are stock with 20-inch tires. 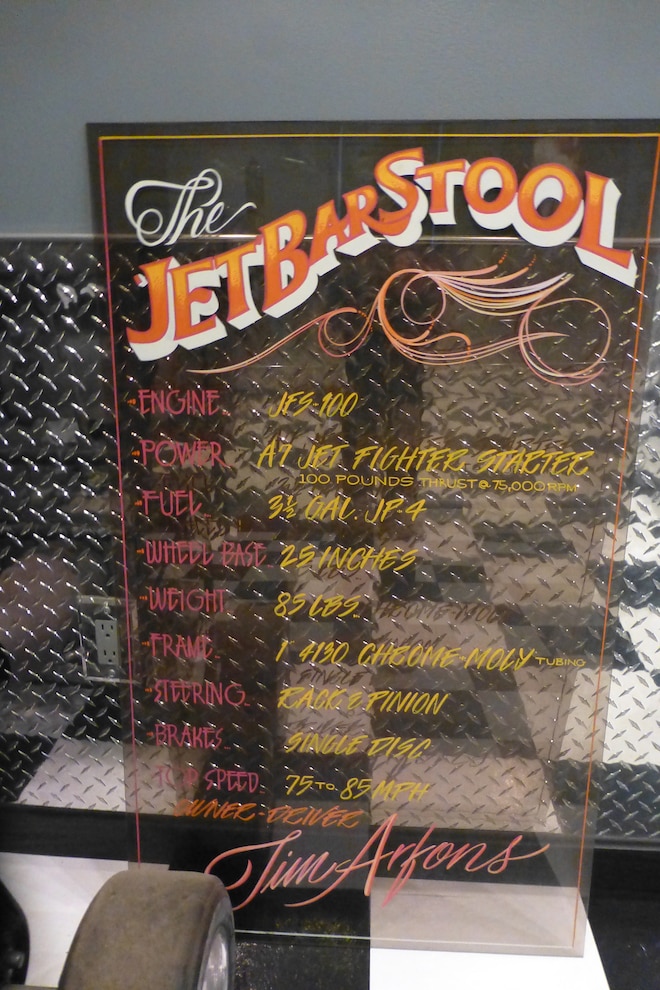 View Photo Gallery | 21 Photos
Photo 14/21   |   Akron Turbine Group Tim Arfons Jet Dryers 008
So, exactly what is a track dryer? Tim’s Akron Turbine Group's Turbo Heater/Dryer is the only heater/dryer designed exclusively for the asphalt and construction industries. “Instead of waiting for surfaces to dry naturally, you get back to work in minutes or hours instead of days or weeks, even in tough weather situations,” Tim pointed out. For example, dryers heat and dry track surfaces, removing moisture and debris in minutes so weather doesn’t hold up races. They can also be used to remove snow and ice, as well as to heat pavement before striping. Exclusively made and marketed for the race industry, Tim’s user-friendly design dries up to 20 million Btu. “The Turbo Heater Dryer is a secret weapon race track operators have used for years, and now contractors around the world are using it to out-distance the competition year-round. Dryers can be custom-ordered for specific uses.” 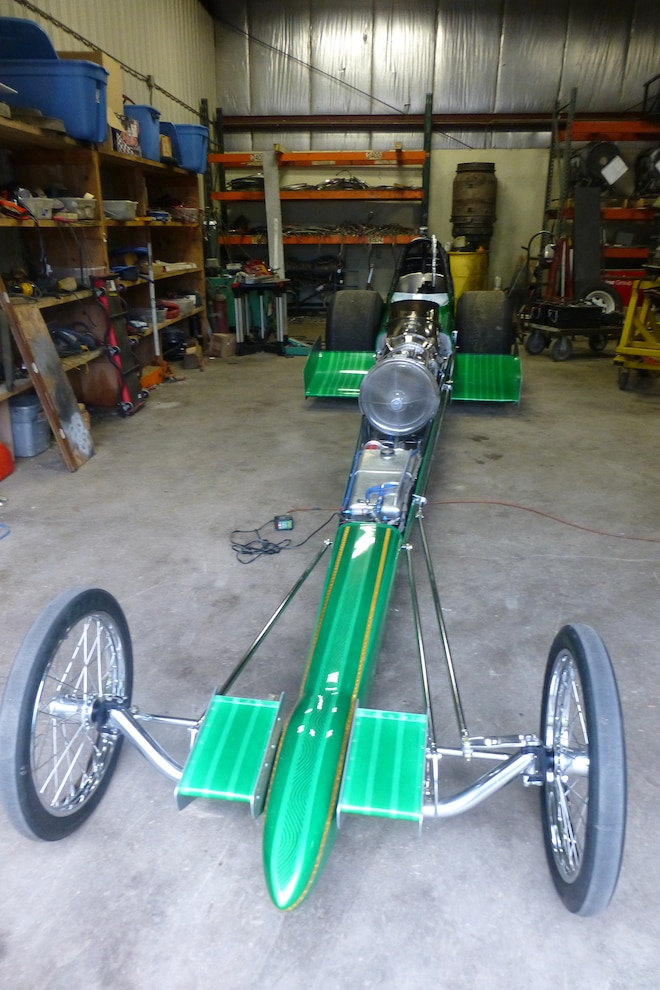 View Photo Gallery | 21 Photos
Photo 15/21   |   Akron Turbine Group Tim Arfons Jet Dryers 011
It’s no surprise to learn Tim has the largest inventory of jet motors and spare parts and is considered a top authority worldwide. He not only rents and sells his dryers, he also trains jet dryer operators and is continually innovating with new designs for enhanced safety. He is currently working on a new cleanup jet dryer that carries a very small amount of fuel—30 gallons of kerosene vs. 200 gallons of fuel.
Now, that’s how to use your work truck!
Specs and Design of Track Dryers
• Dryers use the General Electric CJ610 Business Jet Engine.
• Engine intake is in the truck bed to keep it clean and increase the longevity of the unit.
• Each dryer is custom designed to fit the needs of the client.
• The design for dragstrip use differs from road course and superspeedway use.
• Dryers can either be permanently installed or slide in and quickly mounted and then can be removed, so the truck can be used for other tasks—a development originated by Tim.
• Tim also builds trailer dryers.
• The custom fuel system is purposefully simple to allow the operator to focus on “race traffic,” which can go by at up to 200 mph.
• Dual electric starters enable Tim’s dryers to start cooler and faster, eliminating hot starts.
• The fuel system also features an on-board dump, making it easy to transport the dryer from track to track safely.
• Tim has designed his dryers to run on kerosene, rather than gas, to increase safety.
• Dryer batteries stay charged using the truck’s alternator.
• Dryers are built with “off-the-shelf aircraft items.”
• Each unit comes with high-speed, high-temperature, and low oil pressure warnings.
• Tim’s newest design is a small-yet-powerful jet engine the size of a snowblower, which he calls a “cleaning jet” that comes at a lower price point and is a lighter-duty alternative to top-of-the-line dryers.
• Tim offers 24-hour customer service to answer tech questions and troubleshoot his products.
001 021 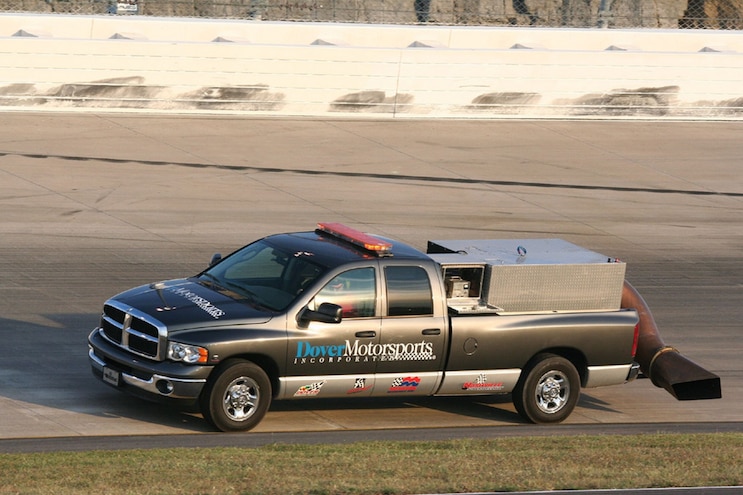 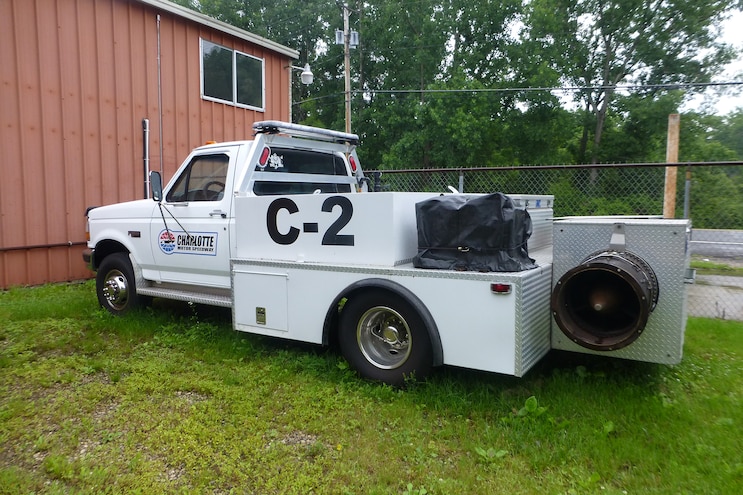 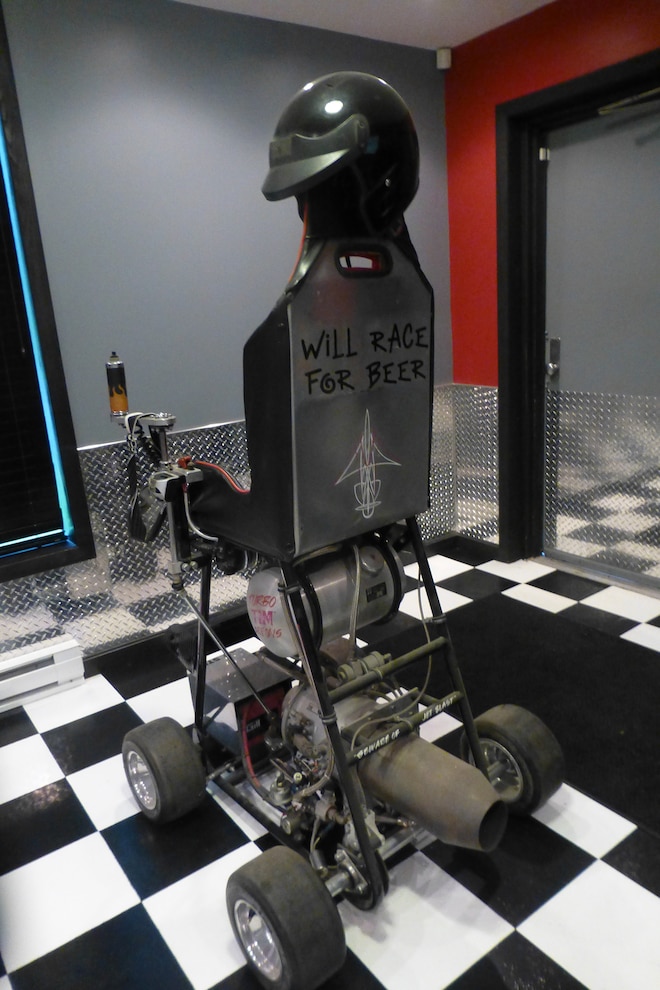 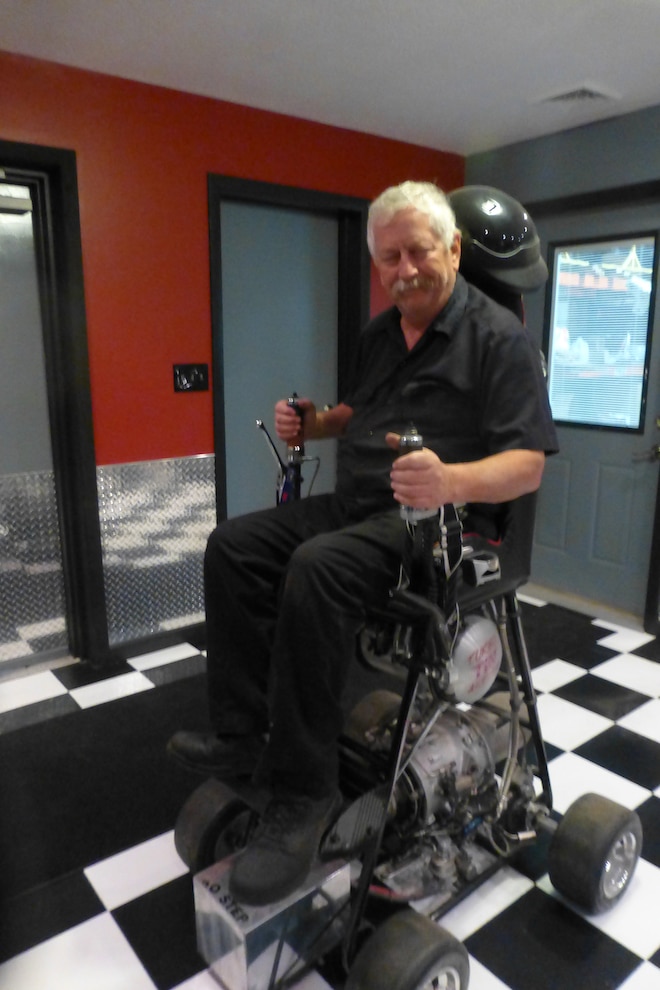 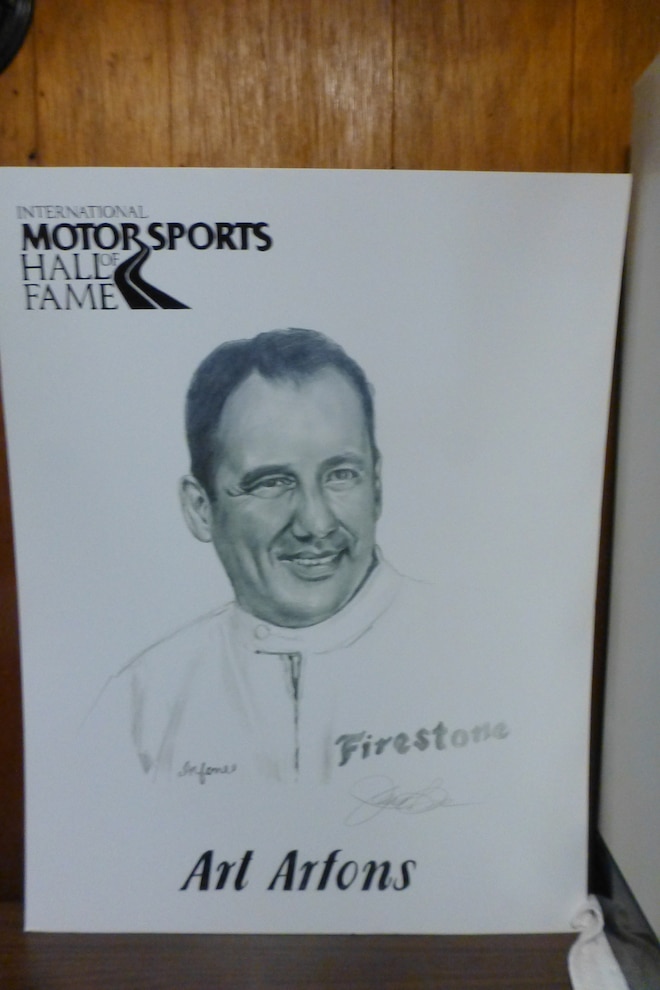 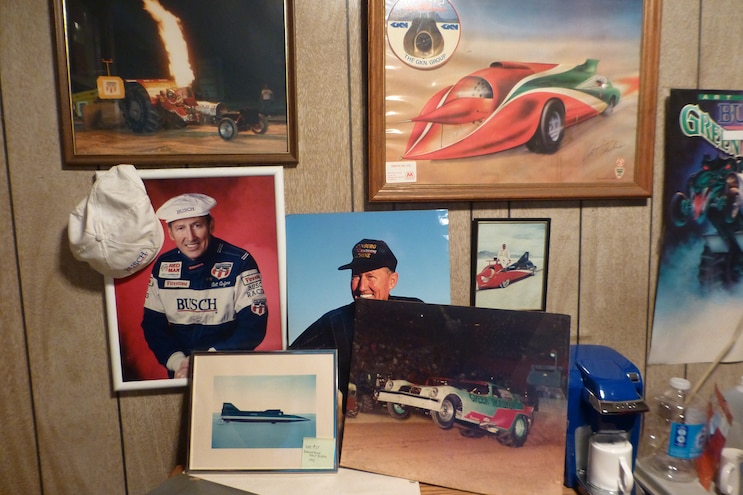 View Photo Gallery | 21 Photos
Photo 21/21   |   Akron Turbine Group Tim Arfons Jet Dryers 020
Art Arfons
Born in 1926, Art grew up working on farm machinery before joining the Navy in 1943, where he specialized in diesel mechanics. Back home in Ohio, he and his half-brother Walt got into drag racing and started building the first Green Monster race car. The two worked together until the ’50s, before going their separate ways and competing against each other.
In 1960, Art first raced his aircraft-powered Anteater at Bonneville and achieved a top speed of 313.78 mph the following year. As jet engines became popular in civilian aircraft in the ’60s, Art started experimenting with them in his cars. Cyclops was his first jet-powered car. It produced 8,000 hp with a top measured mile speed of 330.113 mph. The open-cockpit car is still considered the fastest of its kind, although its design positioned the driver directly in the air intake, so that there was no way to enclose the cockpit and still supply air to the engine, which limited the top speed. In deference to Cyclops’ less-than-perfect aerodynamics, Art introduced another innovation—the first land speed record vehicle using a wing to produce downforce, preventing it from becoming airborne.
In 1964, Art drove his Green Monster, powered by an “F-104 Starfighter jet engine with four-stage afterburner” turbojet, to the land speed record three times within the next year. It ran at a speed of 576 mph.
In 1966, Art’s focus turned to jet-powered tractor pulling. He went on to win the National Tractor Pulling Association championship in the 9200 Modified Class. After years of experimenting, tinkering, and trying, Art passed away in 2007 and was inducted into the International Motorsports Hall of Fame in 2008.