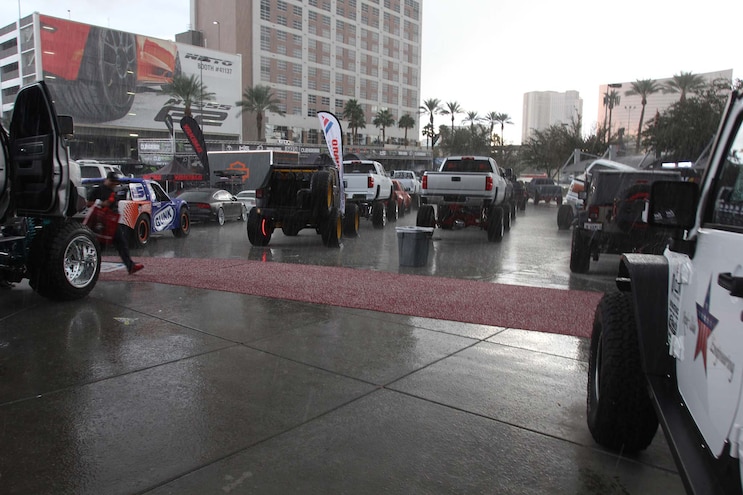 With thousands of gorgeous, award winning, show cars and trucks parked in the lots outside, around, and in between the halls of the Las Vegas Convention Center the one thing everyone hopes will never happen, besides a flock of seagulls with the runs, is a rain storm. And for the first time in more than a decade this worst-case scenario came to fruition.
Menacing skies and varying weather reports greeted show goers on Monday evening. By Tuesday morning the clouds had moved on the local weatherman was saying we were in the clear. On Wednesday morning all of that changed. Clouds rolled in and dumped a pre-dawn drenching on the unsuspecting SEMA show while owners and show-goes slept off the night before. By mid-day the cleanup had finished and the vehicle were all looking their best again, and that’s when it all fell apart. A sudden thunderstorm rolled in and once again sent people darting for cover. Then the rain turned to hail, lightning flashed, thunder clapped. It was a half-hour of these vehicle owners’ worst nightmares.
And just as quick as it moved in it was over. Doors had been left open, convertible tops down, and sunroofs cracked. It was a mess, but overall could have been a lot worse. Fortunately, Thursday morning awoke to bright blue skies and cold temperatures with not a cloud in sight. Here’s to hoping this doesn’t happen again for at least another decade.