The 2017 Ford Super Duty - Will History Repeat Itself? 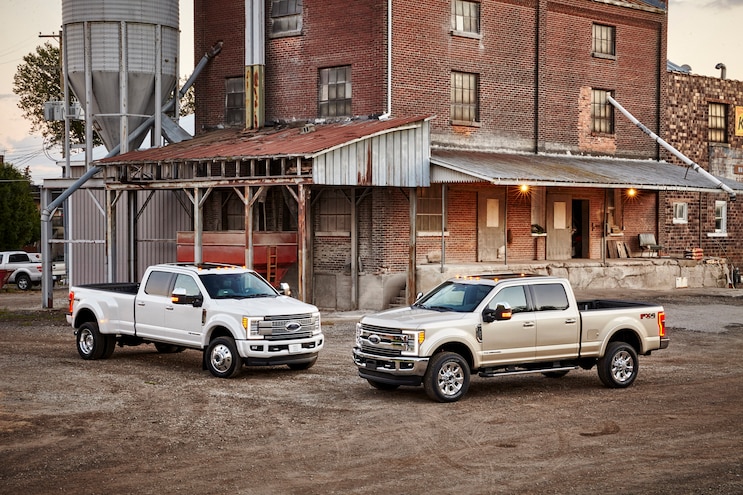 For the ’17 model year, the Super Duty is enjoying its first complete redesign in nearly two decades, with what Ford is calling the “most significant product action” in 17 years. While the basic aluminum body structure is shared with the handsome F-150, the front clip, hood, fenders, lights, and beds are all unique to the Super Duty. The new mil-spec aluminum body is stronger and more dent resistant than the old steel body. To handle higher loads, the Super Duty uses thicker gauges of aluminum in key areas. 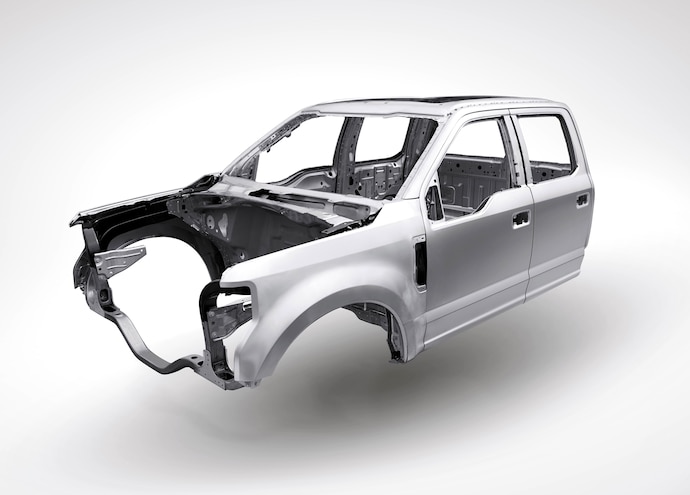 View Photo Gallery | 14 Photos
Photo 2/14   |   004 2017 Ford Super Duty Aluminum Body
Ford pegs the weight savings at somewhere around 350 pounds net. And because this switch to an aluminum body resulted in such a massive weight savings (according to Ford, it slashed more than 500 pounds by swapping the old steel body for an aluminum one), the company focused on increasing the truck’s already stellar capability. Ninety-five percent of the fully boxed frame is made from high-strength steel, using rails that are 1.5 inches taller, resulting in a frame stiffness up to 24 times higher than the old frame. Other improvements include larger axles, a heavier-duty driveline, bigger brakes, and tougher transfer cases. Additionally, all Super Duty trucks now come standard with weight-carrying hitches. 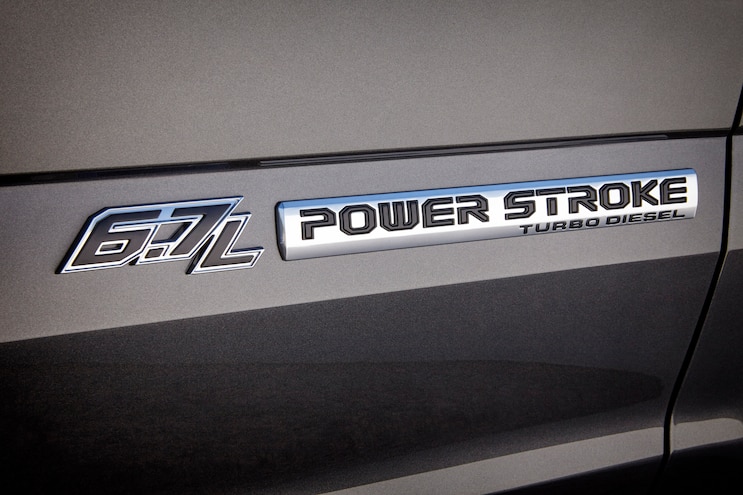 View Photo Gallery | 14 Photos
Photo 3/14   |   014 2017 Ford Super Duty Power Stroke Badge
You won’t find any EcoBoost engines lurking under the Super Duty’s aluminum hood, as Ford has decided to stick with the familiar for its powertrain offerings. Carrying over are the 6.2L gas V-8, 6.8L gas V-10 (chassis cab only), and potent 6.7L Power Stroke diesel V-8. An all-new six-speed transmission, which Ford is calling the TorqShift-G, will also debut behind the 6.2L V-8. The rest of the lineup will get a version of today’s six-speed 6R140 TorqShift transmission.
At Ford's live event at the State Fair of Texas, the company announced not only would the Power Stroke diesel V-8 get a bump in output but the gas engines would be more powerful and torquier, as well. We assume that means a boost from the 385hp and 405lb-ft of torque of the 6.2L V-8 and the 362hp and 457lb-ft of torque of the 6.8L V-10. In addition, the SOHC 6.2L V-8 will benefit from larger intake valves and dual-equal variable cam timing. It will also be E85 capable and available with a CNG/propane prep kit (same with the three-valve V-10 on chassis cabs). 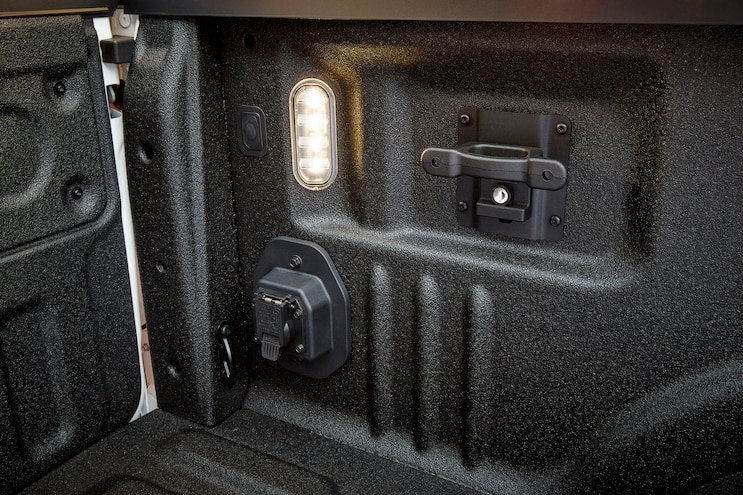 View Photo Gallery | 14 Photos
Photo 4/14   |   011 2017 Ford Super Duty Cargo Hook Bed Light
Features we love are the LED bed-lighting system, the latest version of the tailgate step, Ford’s Tough Bed spray-in liner, and Ford’s new BoxLink storage and cleat system. The short bed of the Super Duty also kept the front stake pockets, something that is curiously lost on the F-150—a shortcoming for drivers who use bedrail-mounted racks for work or action sports.
Using the F-150’s body has benefitted the Super Duty with up to six additional inches of cab length over the outgoing truck, resulting in a roomier cabin. The Super Duty also shares the dash and totally flat rear floor with its 1/2-ton brother, but it adds some unique storage solutions, such as a two-tier glove box and dividable and locking rear under-seat storage. The higher-amperage upfitter switches have been moved to the overhead console and now total six, two of which are powered at all times. Other items shared with the F-150 are an 8-inch productivity screen, improved trailer brake controller location, multi-contour seats with optional massaging function, and inflatable rear safety belts. You can now get up to two 400W/110V power outlets. 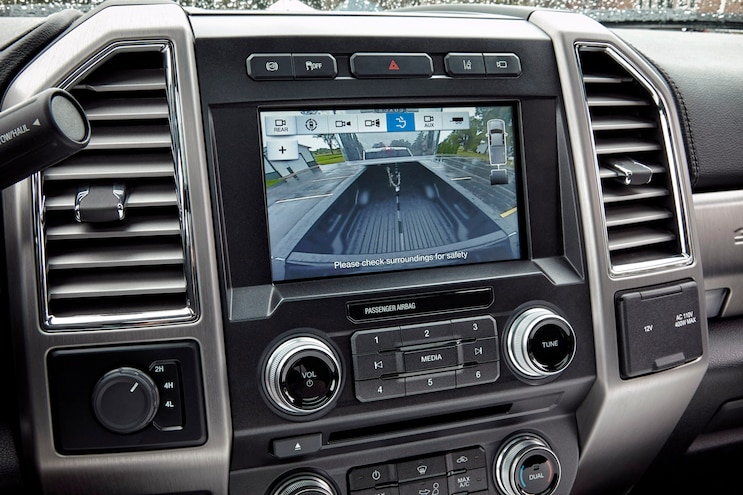 View Photo Gallery | 14 Photos
Photo 5/14   |   013 2017 Ford Super Duty Infotainment Center
Perhaps the biggest story about the Super Duty is just how loaded with technology it is. At the heart of these upgrades are up to seven high-resolution cameras. In addition to cameras, the Super Duty is now equipped with blind spot monitoring, and unlike the F-150, this feature remains functional when a trailer is attached. Tire-pressure monitoring gauge now has the ability to monitor trailer tire pressure.
About the only thing the Super Duty doesn’t have is the F-150’s Pro Trailer backup assist. Unfortunately, the Super Duty chassis isn’t equipped with the same electric-assisted EPAS steering setup as the F-150, so the capability isn’t baked into the platform as it is on the 1/2-ton trucks. However, it does use a new adaptive steering system that will be able to adjust to different driving situations and reduce the amount of steering input needed, depending on speed and load.
The Super Duty also benefits from the all-new and much-improved Sync 3 communications and entertainment system, along with support for Siri Eyes Free. Additionally, the F-Series Super Duty has undertaken 12 million miles of testing before it goes into the customer's hands next year. That's 20 percent more than the F-150 when it was in development stages.
From what we know so far about the new Super Duty, there is a lot to be excited about, with much, much more news to come. Ford assures us we won’t be disappointed by the end results, a quieter, tougher, smoother riding, more capable, more powerful Super Duty.
The truck is deserving of the 13-inch Blue Oval on the grille and poised to carry FoMoCo into the next chapter of the heavy-duty pickup wars. Ford is hoping history will continue to repeat itself. 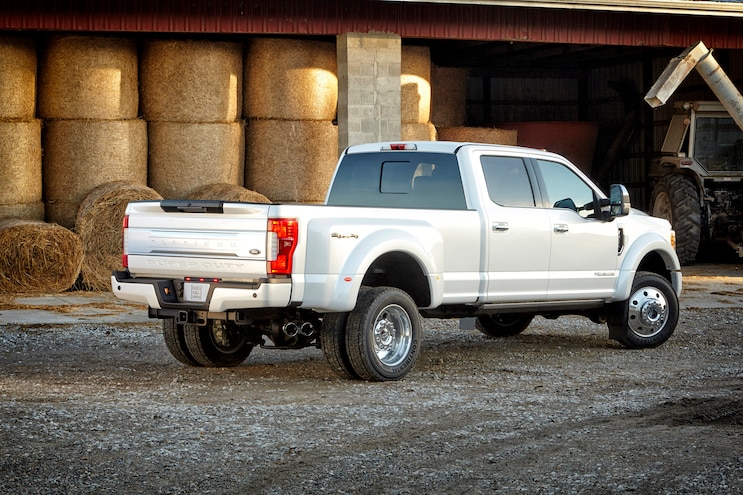