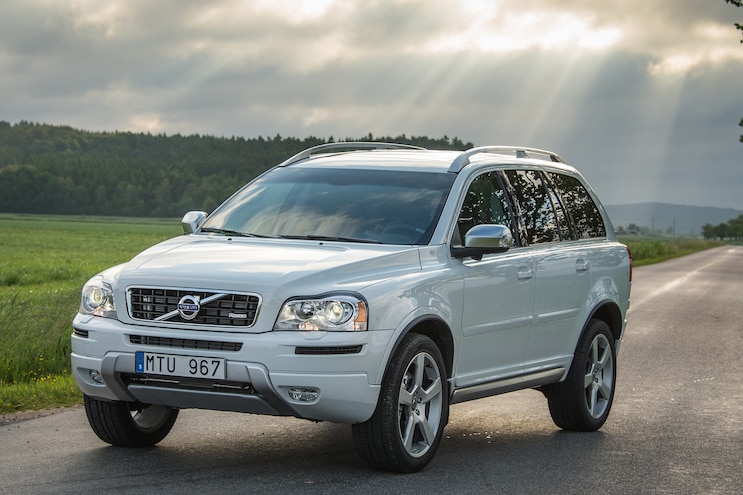 As a second generation of the Volvo XC90 starts to win fans, the first generation now becomes more accessible for those of us who prefer to buy used. This midsize premium crossover SUV seats up to seven and comes with levels of safety equipment for which Volvo is renowned. 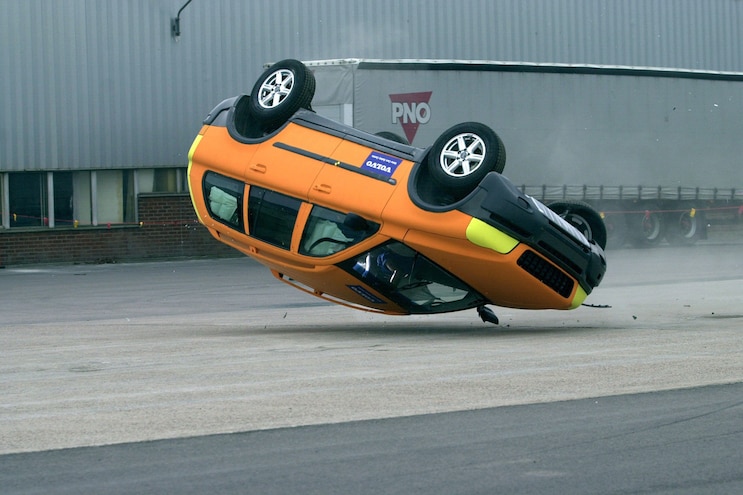 View Photo Gallery | 6 Photos
Photo 2/6   |   006 Volvo XC90 Roll Over Crash Testing
If the Swedes built tanks, they’d be built like a Volvo. The XC90’s unibody shell can withstand being rolled over a few times and the doors will still open. The hood is designed to scoop any pedestrians unfortunate enough to come into contact with a moving XC90 up and away from the road, rather than forced down and in danger of being crushed by the wheels. This approach is now mandatory for all automakers, but Volvo thought of it first.
The XC90, the company’s first SUV, was also one of the first crossovers to have a Roll Stability function as part of its overall stability/traction control system. Full-length side curtain airbags and electronic brake-force distribution are standard too. It’s based on the S80 sedan, one of the safest cars ever built.
Don’t expect a lot of off-road prowess, but for everyday driving, the XC90’s big selling point is its wonderful comfort. Volvo (and compatriot company, the now-defunct Saab) makes some of the best car seats in the business. The well-tuned suspension adds to that general relaxed feel, and the integrated children’s booster seat is another nice touch. 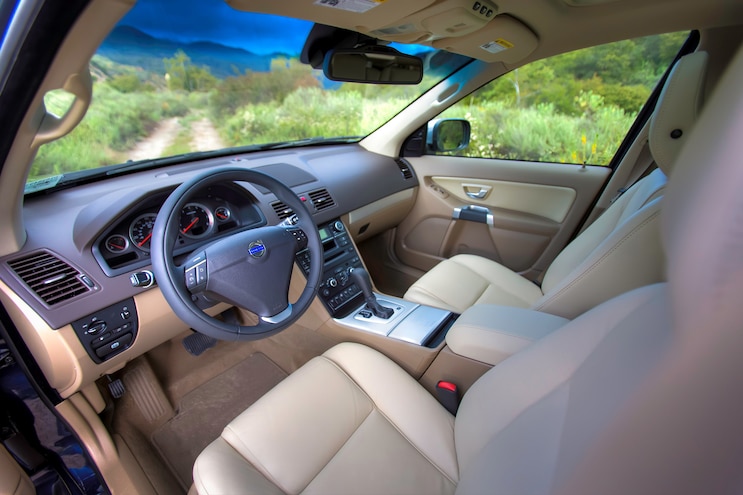 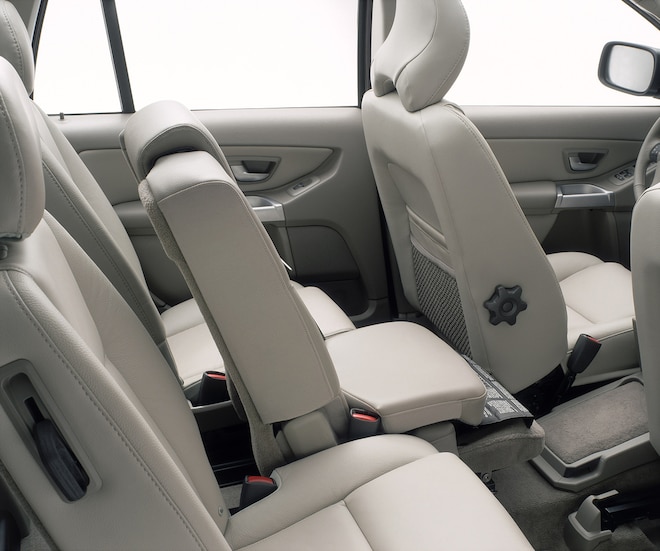 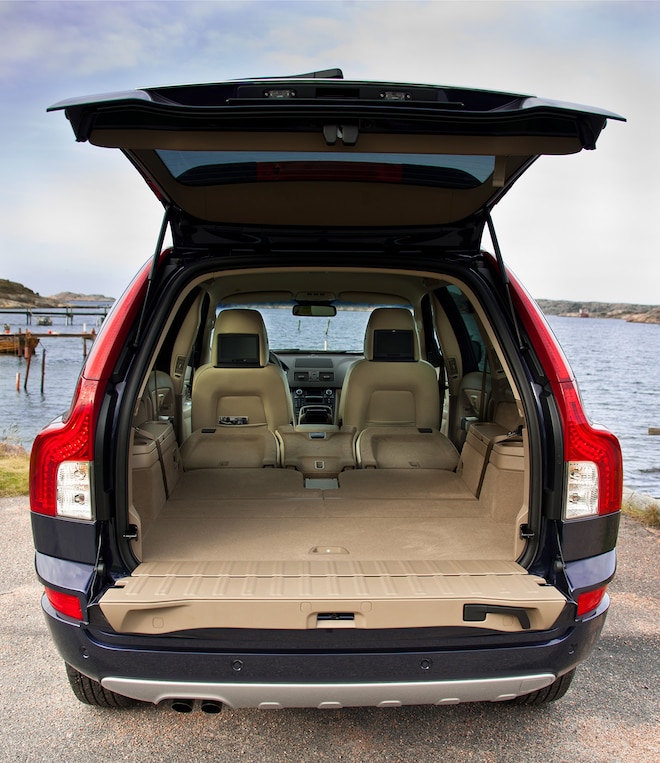 View Photo Gallery | 6 Photos
Photo 5/6   |   003 Volvo XC90 Rear Cargo Area
The cabin and cargo areas are also spacious (maximum cargo space is a cavernous 92 cubic feet) and use high-quality materials. Third-row seating does tend to encroach upon the second row’s territory, however.
The XC90 started life with a turbocharged inline five-cylinder engine, the 2.5T, or a turbo inline-six, called the T6. The former makes 208 hp and 236 lb-ft of torque from its displacement of 2.5 liters, while the latter squeezes 268 hp and 280 lb-ft from 2.9 liters.
The 2.5T comes with front-wheel drive as standard, although all-wheel drive is an option. The T6, however, is all-wheel-drive only. Don’t think the 2.5T is not worth the bother, though. This engine is paired with a five-speed automatic transmission from specialist company Aisin. It’s also EPA-rated at 16 mpg city, 22 mpg highway, and 18 mpg combined.
The T6, on the other hand, is linked to a four-speed automatic transmission that’s a General Motors’ design that was then fine-tuned by Volvo. Sadly, this unit has seen plenty of failures. Then factor in the T6’s thirst for gasoline: 14/19/16 mpg.
The ’05 model year brought an extra engine choice: a 4.4L V-8 developing 311 hp and 325 lb-ft. This version only came with all-wheel drive and a six-speed automatic transmission. The T6 was gone by ’06. 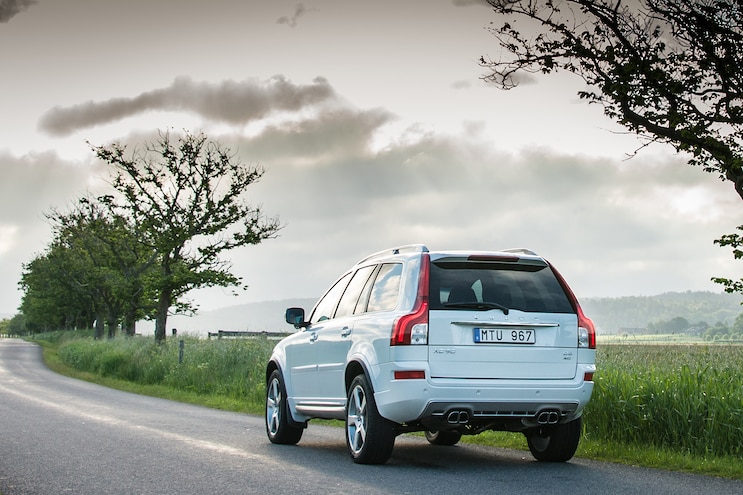 View Photo Gallery | 6 Photos
Photo 6/6   |   002 Volvo XC90 Rear Left Three Quarter View
It wasn’t until the ’07 model’s mild facelift that another six-cylinder engine—naturally aspirated this time—became available. This was a 3.2L inline-six producing 235 hp and 236 lb-ft of torque, and it replaced the 2.5T. Another safety innovation, blind spot monitoring, also came along at this time, along with Sport trim for V-8–powered versions.
The R-Design trim level debuted in ’09 with a sporty-ish suspension, replacing the V-8 Sport model. Rear park assist and third-row seating both became standard throughout the range in ’10. Bluetooth arrived for ’11, along with five more horsepower for the six-cylinder engine. By ’12, the V8 was discontinued and the XC90 was showing its age — having suffered from a lack of investment by Ford, its parent company for the majority of this generation’s lifespan. But at least there was a final mild refresh for ’13 before entering its last model year.
As is sometimes the case with premium marques from Europe, the facts about quality and reliability don’t always sync with the reputation. The XC90 gets through gas, tires, and brake pads and suffers from transmission problems. Water might collect in the six-cylinder’s engine block where there’s a bearing for the balancer shaft. Volvo’s remedy was to drill a drainage hole.
The ’04 and ’05 models have seen the most complaints, so best to steer clear of those. It looks like an ’09 3.2L could be the sweet spot. A straightforward 3.2L with all-wheel drive, blind spot monitoring, and the Premium Package in good condition is valued at $10,013 when purchased from a private individual. A comparable Acura MDX could fetch $15,729, while the ubiquitous Lexus RX350 might go for $15,298.
2003-2014 Volvo XC90
Body type: 4-door SUV
Drivetrain: Front engine, RWD/4WD
Airbags: Driver, front passenger, side curtain
Engine: 2.5L/208hp DOHC I-5 (’03-2006); 2.9L/268hp DOHC I-6 (’03-’05); 4.4L/311hp DOHC V-8 (’05-’11); 3.2L/235hp DOHC I-6 (’07-’11, 240hp ’12-’14)
Brakes, f/r: Disc, disc, ABS
Price range, whlsl/retail (KBB): $1,264/$3,775 (’03, FWD 2.5L I-6), $31,814/$34,379 (’14, 4WD R-Design 3.2L I-6)
Recalls: Too many to list
NHTSA frontal impact rating, driver/fr pass: Five stars/four stars