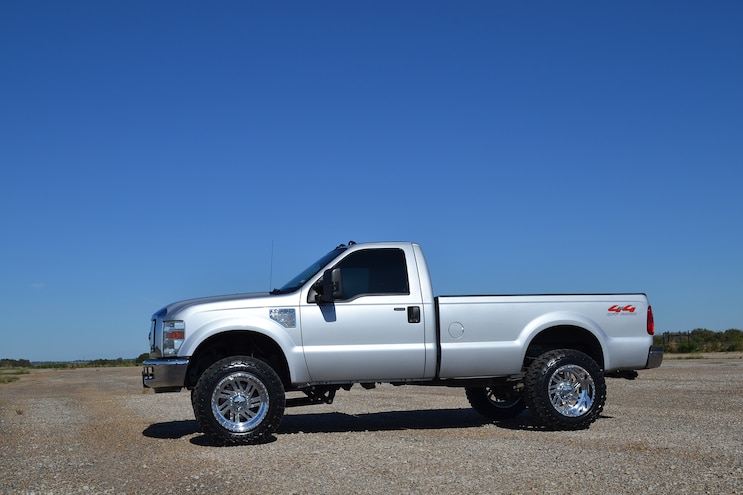 When it comes to building a “dream truck,” David “DC” Cox from Ennis, Texas, had a different vision for his rig than many enthusiasts. “I never really liked all these huge lifts, chrome, or 8-inch tips—I just wanted something fast that I could drive on the street every day,” David says. Fortunately for him, he started with the right platform for speed: a regular cab ’08 Ford F-350. Out of the box, the 6.4L Power Stroke V-8 diesel engines that power ’08-to-’10 models are rated at 350 hp, but they can be easily modified to make more than 500 rear-wheel horsepower.
While this power level can also be accomplished with tuning only, David had a lot more than just reflashing the PCM in mind. “I knew the type of truck I wanted to build,” David says. And with the help of Justin Eversole at Big Stick Motorsports, he started to make it happen. “I wanted the Ford to be a street/strip/work truck, so no single area could suffer. It had to be able to do it all.”
David and Justin started the transformation by beefing up the engine itself with a set of ARP head studs to prevent blown head gaskets. The factory turbochargers can only flow so much air, so compressor wheels in both units were upgraded, with 59mm and 71mm inducers. The exhaust was also modified with 6.0L exhaust manifolds, a Rudy’s Diesel Performance & Off Road up-pipe kit, and a 46mm wastegate from Precision Turbo & Engine. The intake side was also reworked with a No Limit Fabrication cold-air system, DieselSite boots, and a Spearco intercooler.
In addition to the airflow modifications, the fuel system was improved with a 165-gph AirDog II lift pump, Rudy’s fuel-bowl delete, twin K16 high-pressure fuel system, and 30-percent-over injector nozzles. The final step of the process was the creation of some hot calibrations by Gearhead Automotive Performance.
With an estimated 800 hp on tap, David needed a transmission that could handle the power and torque the engine was now blasting to the ground. After talking with Justin, the decision was made to go the overbuilt route with the transmission, as they only wanted to do it once. While the factory 5R110 six-speed automatic is stout, David and Justin went with a full competition build from Rudy’s, which features not only a revised clutch count, but billet input, intermediate, and output shafts; a stronger low/reverse hub; and a custom torque converter from Precision Torque Converters.
With the drivetrain handled, David’s last step was the modification of his truck’s suspension, wheels, and tires. David likes the way 35-inch tires look on a pickup, and since regular cabs are a bit lighter and taller than other configurations, he was able to get away with installing 35s on his F-350 by using a 2.5-inch Pro Comp leveling kit. The big Toyos ride on highly polished 20x12 wheels from American Force, and a Precision Metal Fabrication four-link front suspension system ensures the tires stay planted.
With a best quarter-mile dragstrip pass of 12.2 seconds at 109 mph, David’s F-350 is pretty quick. And although he has built quite a nice truck for himself, David still plans to turn it up even more. A new short-block is currently in the process of being assembled, with the goal of running even quicker times at the track and having better reliability on the street. One thing is definite: We’re sure we’ll be seeing more of “DC” and his quick and clean ’08 Ford.
Fast Facts:
Year/Make/Model: ’08 Ford F-350
Owner: David “DC” Cox
Hometown: Ennis, Texas
Odometer: 109,000 miles
Engine: 6.4L Power Stroke V-8 with ARP cylinder head studs
Fuel: AirDog II 165-gph lift pump, Rudy’s Diesel Performance & Off Road fuel bowl delete, twin K16 high-pressure fuel pump kit, 30-percent-over injector nozzles, Gearhead Automotive Performance tuning
Air: Precision Turbo & Engine 46mm wastegate, Rudy’s Diesel Performance & Off Road 59mm/71mm compound-turbocharger kit, Spearco intercooler, DieselSite boots, and No Limit Fabrication cold-air-intake system
Exhaust: Stepped (4-inch to 5-inch) custom exhaust, and 6.0L Ford ceramic-coated manifolds
Transmission: Rudy’s Diesel Performance & Off Road competition 5R110 five-speed automatic with billet input, intermediate, and output shafts; and an upgraded torque converter from Precision Torque Converters
Horsepower: 800 hp (est.)
Torque: 1,500 lb-ft (est.)
Tires: 35x12.50R20 Toyo Open Country M/T
Wheels: 20x12 American Force
Suspension: 2.5-inch Pro Comp leveling kit, Precision Metal Fabrication four-link (front), and Rancho shocks
Interior: Katzkin leather, and Spartan Dashdaq XL
Fun Fact: David folds in his mirrors at the track. “A lot of people joke about it, but I believe every little bit of aerodynamics helps,” David says. 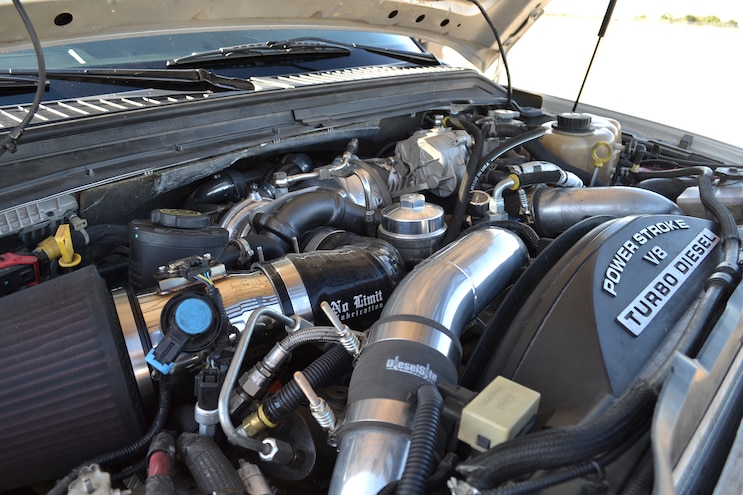 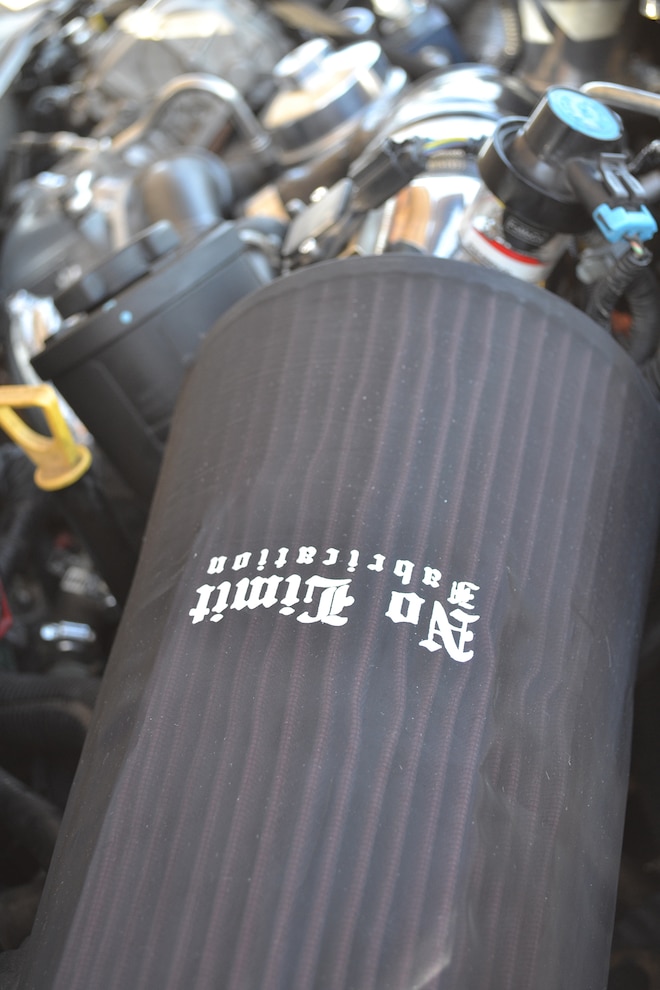 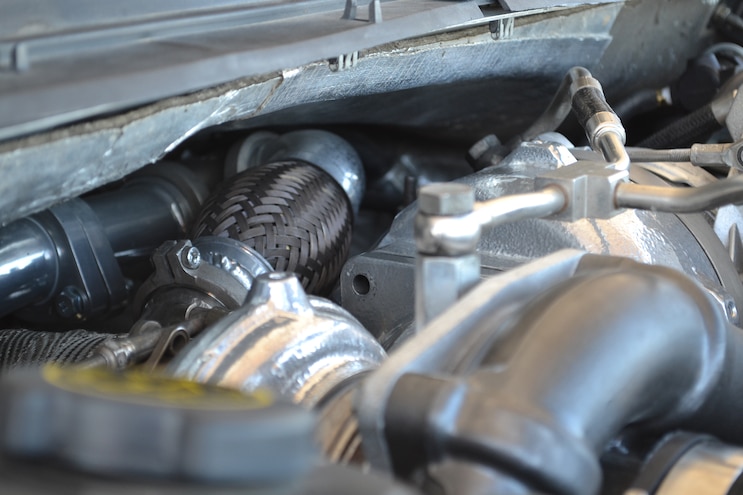 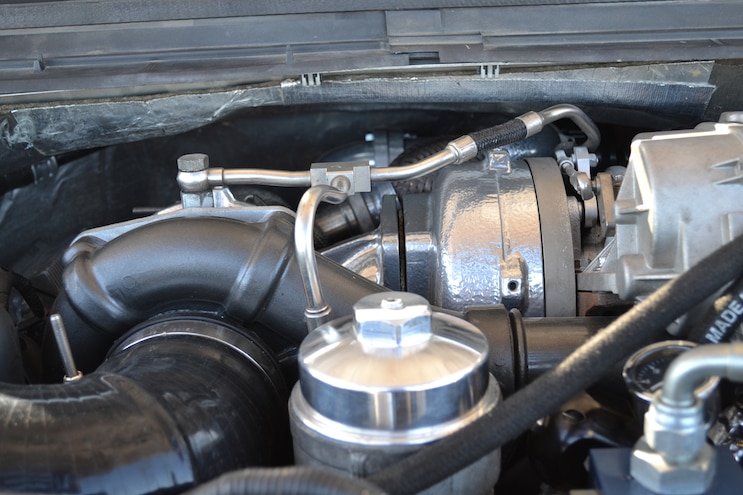 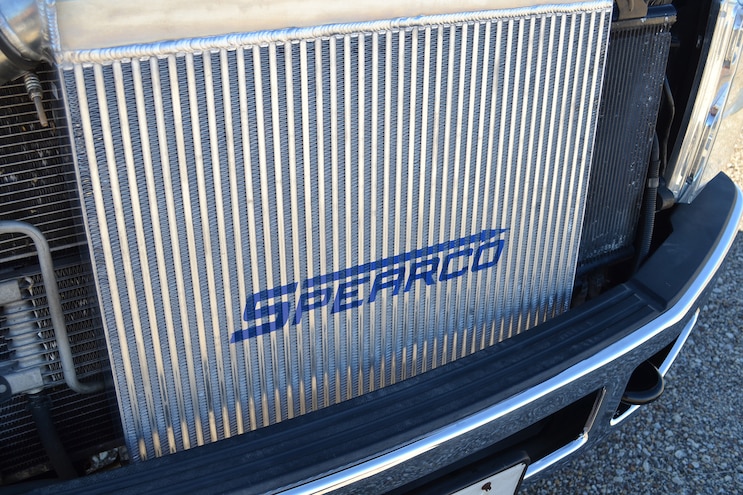 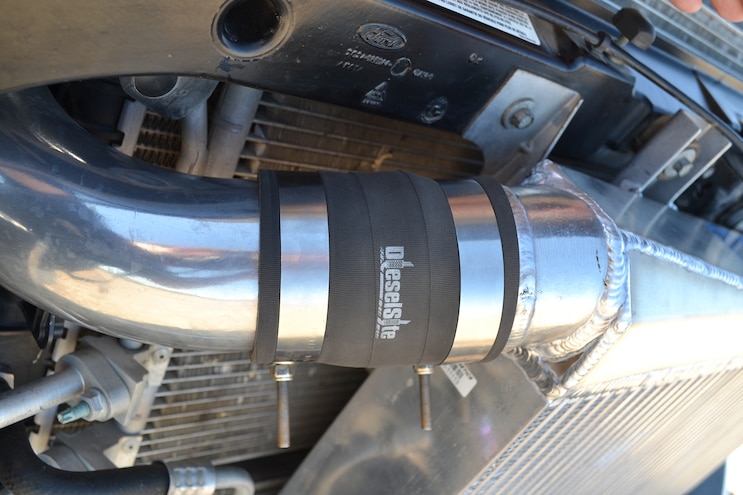 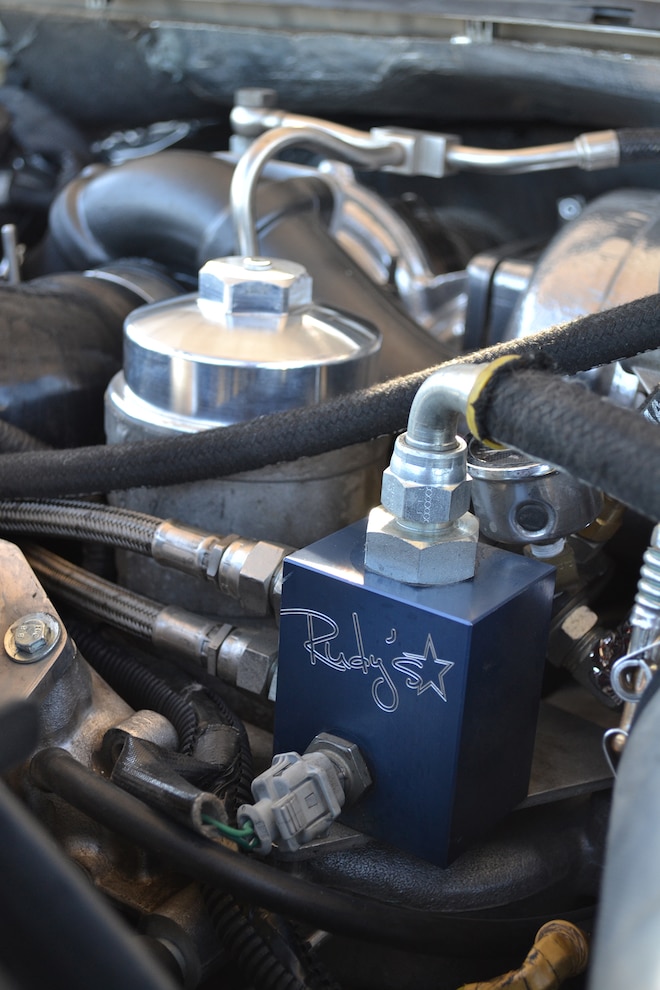 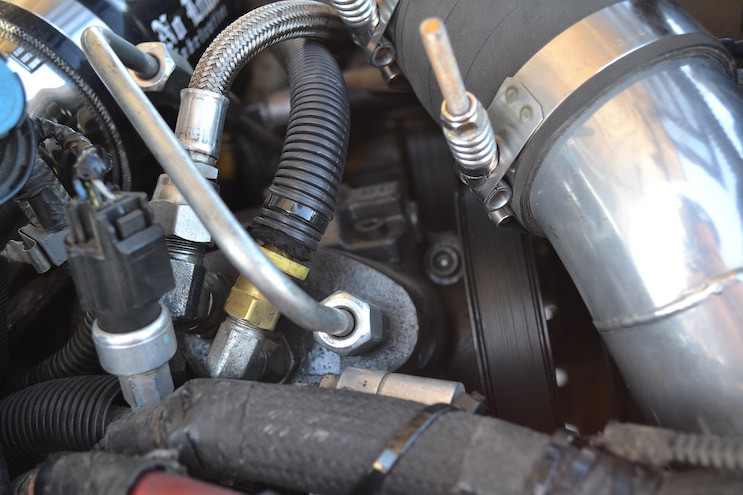 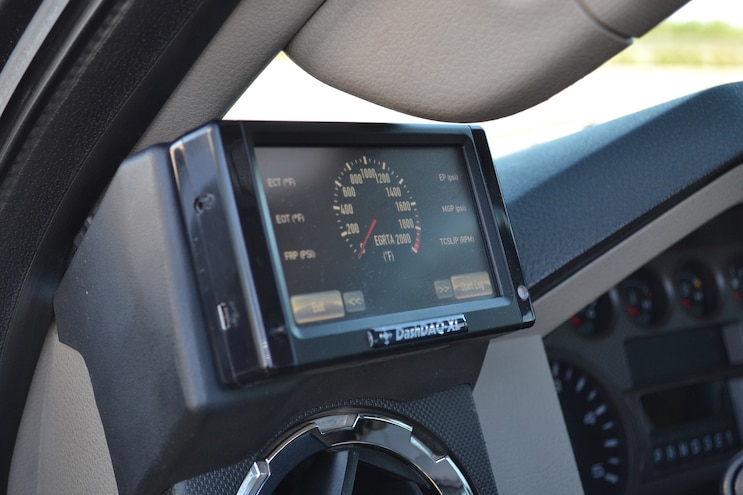 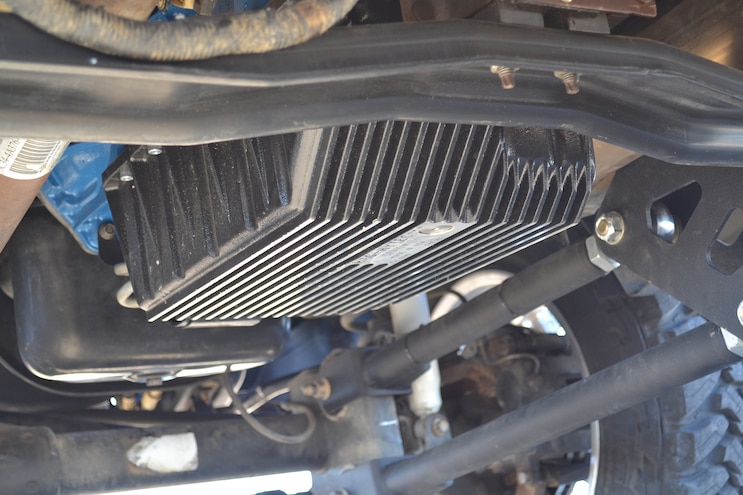 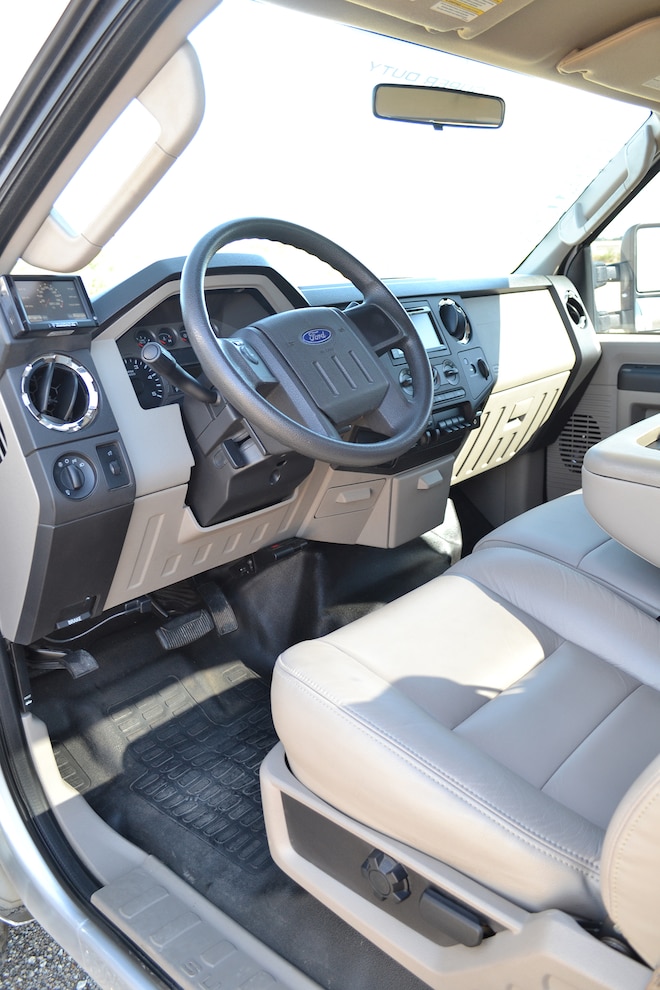 View Photo Gallery | 20 Photos
Photo 12/20   |   012 2008 Ford F350 Interior
David kept the interior of his Ford simple and smooth, with Katzkin leather and a DashDAQ unit being the only deviations from stock. 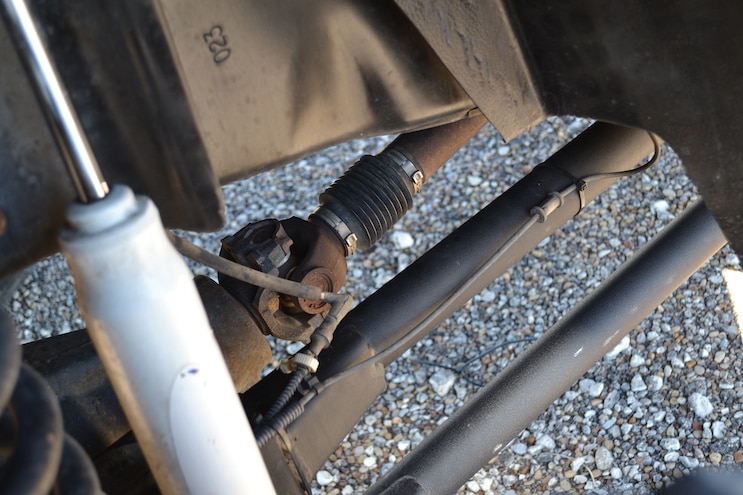 View Photo Gallery | 20 Photos
Photo 13/20   |   013 2008 Ford F350 Four Link Kit
After a bad experience with front axle hop at the dragstrip, David went with this trick four-link kit from Precision Metal Fabrication, which works in conjunction with Rancho shocks to plant the front end on the ground. 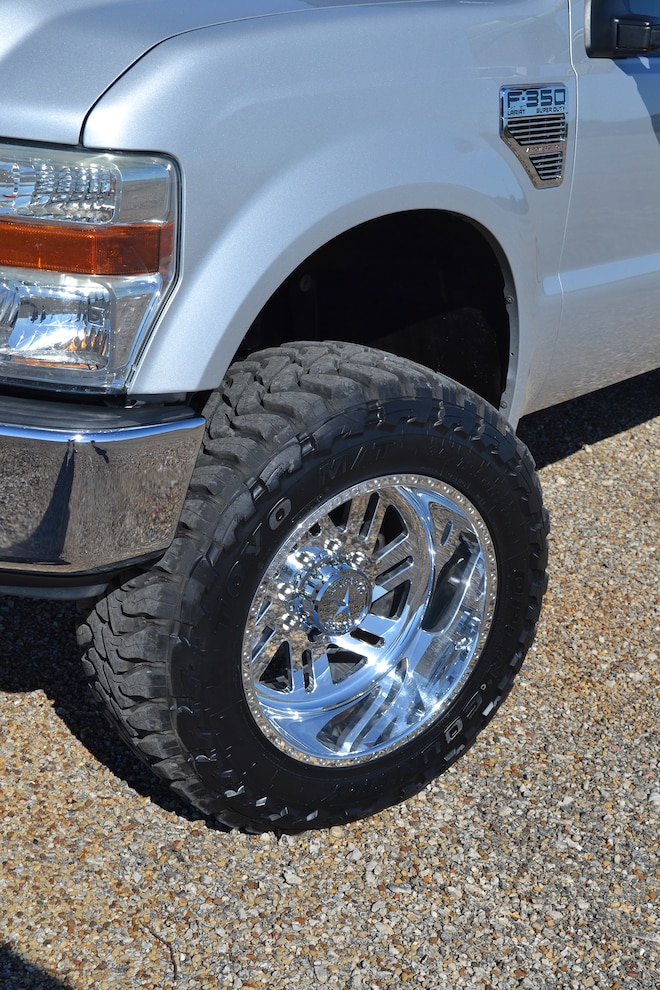 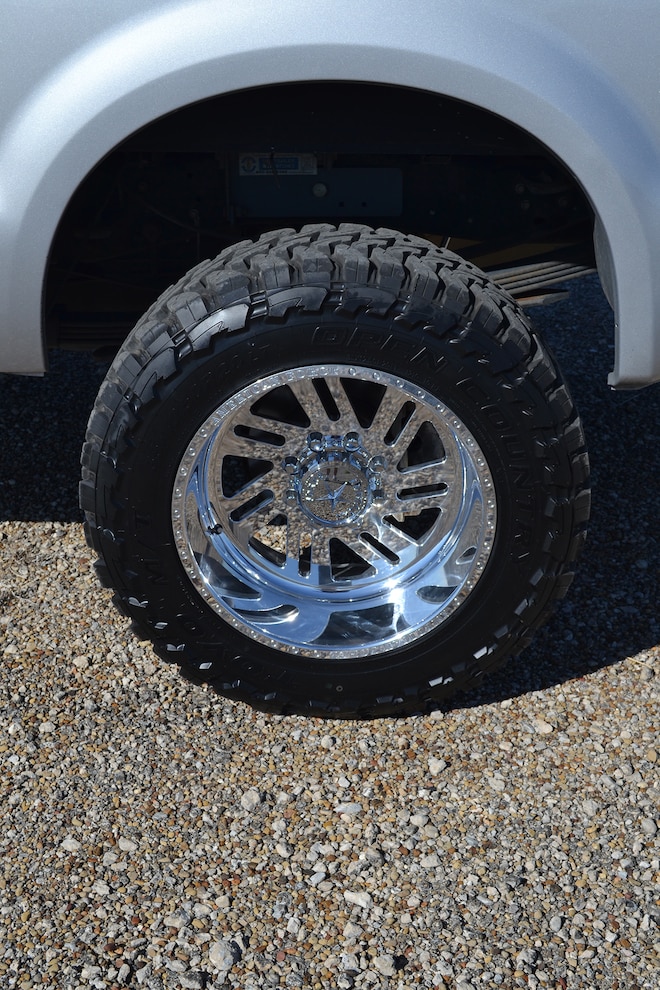 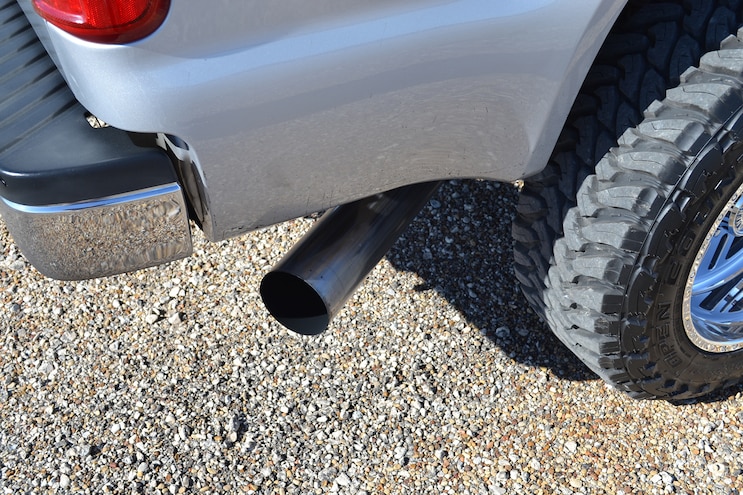 View Photo Gallery | 20 Photos
Photo 16/20   |   016 2008 Ford F350 Exhaust No Tip
Perhaps the most stealth aspect of the truck is that it doesn't have a “Hey, look at me,” exhaust tip. A 4-inch downpipe from the turbos is mated with 5-inch tubing beneath the truck, and then exits right behind the rear tire.