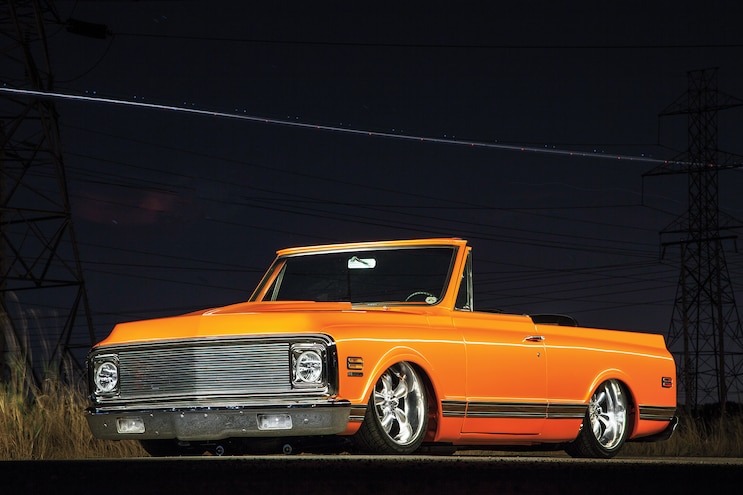 There comes a time in most peoples’ lives when they reassess their path in the interest of growth. It usually comes at a crossroads: getting married, having kids, buying a house or merely realizing one’s own mortality inspires people to alter their course. These corrections on this road called life usually spell the end of pursuits began in adolescence, cars and trucks for example, but people sacrifice one thing to make another part of their lives better.
Then there’s the rest of us. Trucks don’t exactly accommodate a wife and a couple kids but leaving the truck world wasn’t an option for Rick Severson; he’s a lifer (his parents were hobby builders). In fact he liked it so much he bought the company, to paraphrase Victor Kiam (the electric-shaver guy if you’re not old enough to feel your mortality yet). Specifically he started Chevy Metal, an outfit that supplies parts for ’60-’87 pickups. So selling anything on wheels is pretty much selling out. 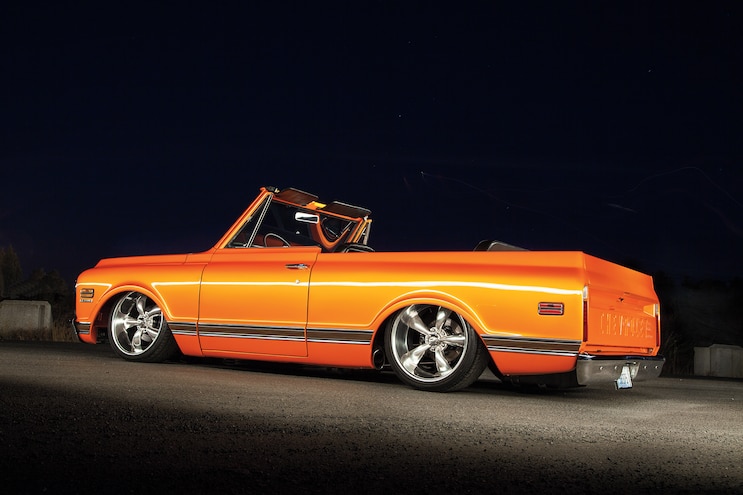 View Photo Gallery | 10 Photos
Photo 2/10   |   003 1972 Chevrolet Blazer Side
But that doesn’t mean he couldn’t change the things around him. In this case he adapted to the C-10’s more domestic cousin, the Blazer. “I bought this one as a running project,” Severson begins. Then he transformed it into a rolling business card for his shop.
He extracted the chassis and hired Old Iron Classics in Vancouver, Washington to C-notch the rear and remount the 12-bolt rear axle with a stainless four-link setup. Severson ditched the stamped control arms for a set of RideTech’s Strong Arms and the knuckles for a pair of Belltech’s dropped version. Both ends wear GM discs. Naturally the truck rides on air. Two ViAir compressors, RideTech Big Red valves, and half-inch line feed Firestone springs. Before he fully reassembled the chassis, Severson sent everything to Vancouver Powder Coating for finishing.
Severson knows little about the oval-port 402 that powers the truck largely because a rebuild just prior to his ownership made it run good enough to leave alone. He did, however, top it with a Holley Street Dominator carburetor on a Performance Products manifold. Hedman headers feed 2 1/2-inch pipes that Old Iron built with 40-series Flowmaster mufflers. The pipes pass a TH400 assembled by Vancouver’s Alan Bragg. Portland’s Driveline Service built the driveshaft. 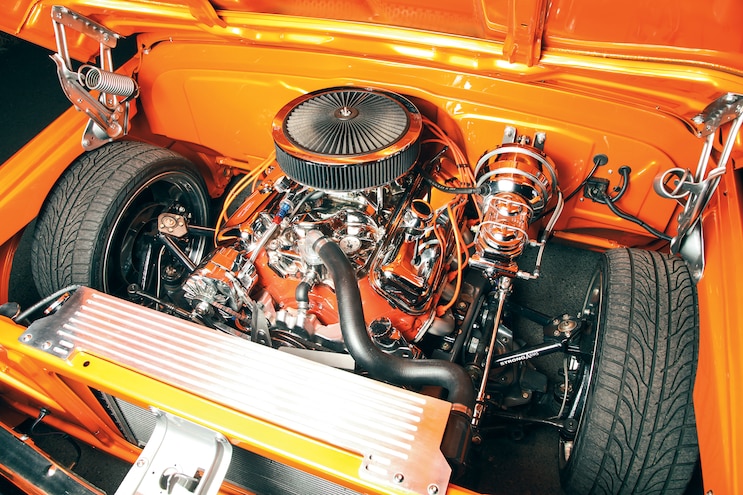 View Photo Gallery | 10 Photos
Photo 3/10   |   004 1972 Chevrolet Blazer Engine
Just because the body remains basically stock doesn’t mean there isn’t a ton of work in it. Its resurrection meant dipping into his catalog of parts, among them a Key Parts Tri Plus hood. Friend Tim Proffer shaved the badges and tailgate trim and Severson filled a few seams and relocated the filler behind the side marker. He replaced the grille insert with 8mm billet bars.
The body wears Lesonal’s interpretation of Lamborghini Arancio Atlas. Severson’s buddy, painter Kevin Dehut, shot it then cut and buffed the finish. “I have painted many cars but this tri-stage paint is so expensive that it wasn’t in the budget to do it twice,” Severson admits. “He takes pride in this project and it’s great to have friends who will help out when you need it.”
This Blazer is more than a means for Severson to shuttle his family around; it’s also a means to bond with his family. His dad, Russell, a retired sheet-metal worker and veteran car builder, dusted off his tools to build various structures like the box around the air tank. His mom, Lois, also a builder in her own right, trimmed the interior. And that’s not just a straight install, either; she scratch-made interior pieces to cover the side panels and enclosure. These panels showcase the various Sony Xplōd components like the XM-554Z 600-watt amplifier, 6.5-inch coaxial speakers, 6x9s and two 12-inch subwoofers. 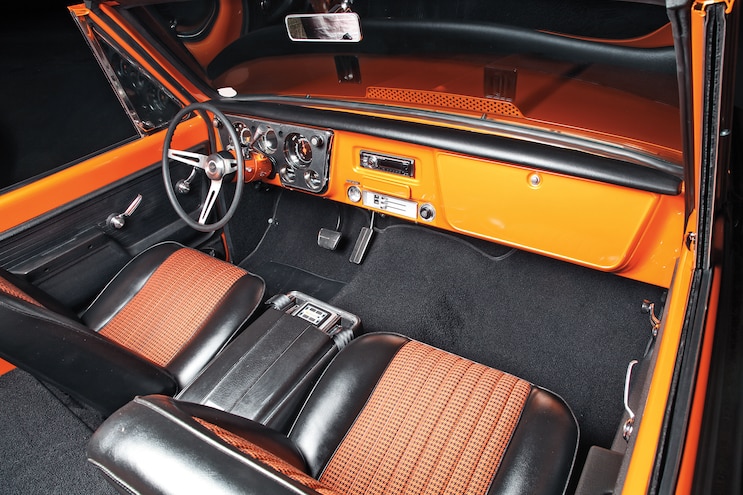 View Photo Gallery | 10 Photos
Photo 4/10   |   005 1972 Chevrolet Blazer Custom Interior Dash
Seversen’s stepdaughters, Gen and Lil, even got in on the act by pitching in on the often-unheralded work like cleaning and detailing before shows and in this case before this shoot. “Now they both want cool cars when their time to drive comes,” he says. And they’ll likely have something exceptional if only so he can pay back their mother, Kerin. “I can’t thank her enough for the patience it takes to see these kinds of projects through,” he says. “She never complains about time in the shop—that kind of support is awesome!
“Being in the business of selling truck parts definitely saved me few bucks,” Seversen says. “But the help of family and friends, I’m happy to have built an affordable rig with just the right amount of eyeball. It’s not a budget buster and it’s not one of those kinds of rigs you’re afraid to drive.
“It seems like someone always has one that’s lower or faster or cooler,” he continues. “But I built this with the help of some great people. And I’m proud of the results.” 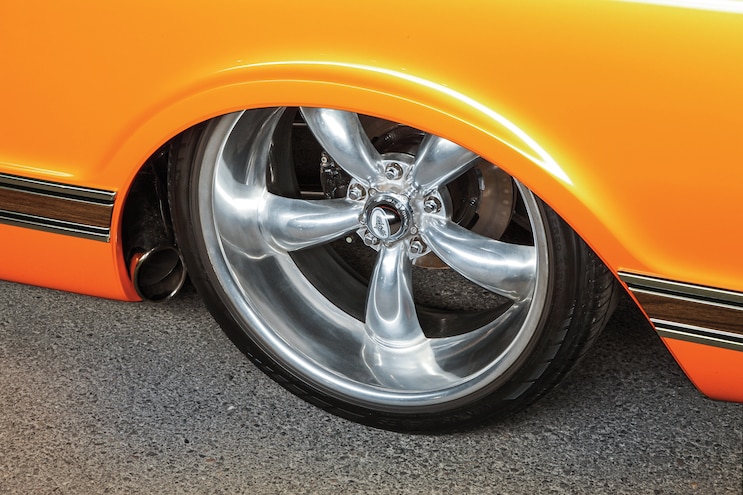