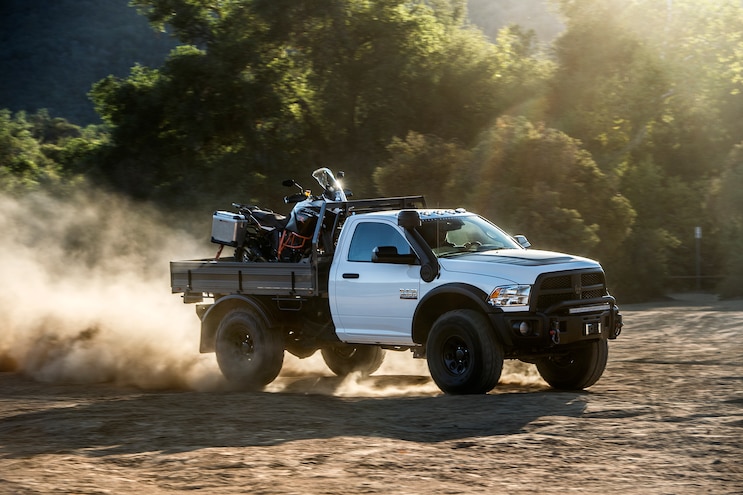 Driving a lifted diesel truck often means you have to put up with a harsh ride, bad on-road handling, poor steering, reduced braking, and the elimination of the factory traction and stability controls. The founder of American Expedition Vehicles, Dave Harriton, strives to eliminate these deficiencies with the AEV Prospector package for ’14-and-up Ram pickups with the 6.7L Cummins diesel engine. By adding on to the work done by the folks at Fiat Chrysler Automobiles, AEV is able to take advantage of the factory engineering for a package that provides the lift needed for serious off-road work while delivering stable and safe performance.
The roots of AEV date back to 1991, when Dave purchased a ’91 Jeep Wrangler YJ that he stretched by 21 inches. This vehicle’s unique modification (and the off-road performance that resulted from it) led to awards and placements on the floor of the SEMA show, and the rest is history. Since that time, AEV has solidified its place as a company that can transform factory trucks into off-road beasts while maintaining the handling, stability, safety, and comfort of a relatively stock 4x4 that’s fresh off the dealer’s lot. In fact, you can buy a Ram and have it modified by AEV before you even take delivery. 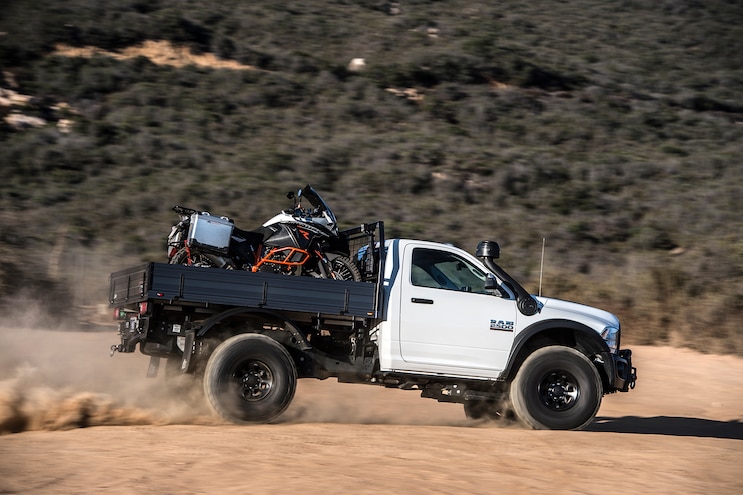 View Photo Gallery | 27 Photos
Photo 2/27   |   001 2015 AEV Prospector Ram 2500 Diesel With KTM 1190 Adventure R Driving Off Road High Speed
The American Expedition Vehicles Prospector package for ’14-and-up Ram 2500 and 3500 pickups is a lot more than a “lift kit.” Instead of ditching the factory-designed parts that took thousands of hours (and millions of dollars) to develop, AEV takes advantage of this engineering. Each truck equipped with the DualSport SC Suspension System is designed so that it drives, steers, and rides just as well as a stock truck, even though it’s riding on 3 inches of lift above 37-inch off-road tires. 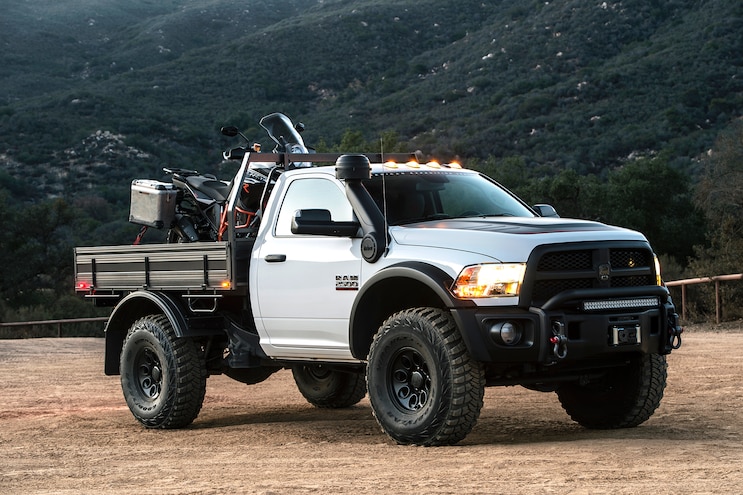 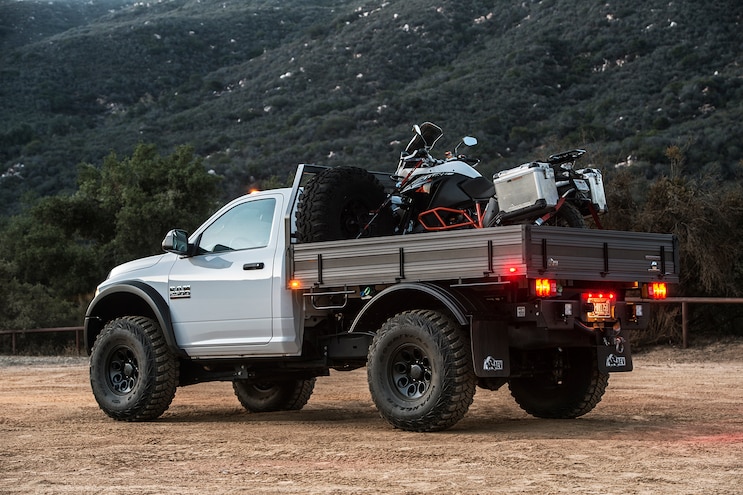 View Photo Gallery | 27 Photos
Photo 4/27   |   003 2015 AEV Prospector Dodge Ram 2500 Diesel With KTM 1190 Adventure R Flatbed Rear View
The AEV Prospector system is available for ’14-and-up ¾- and 1-ton Ram trucks with a Cummins diesel or Hemi gas engine. Taking cues from the Jeep Wrangler suspension setups AEV has been producing for years, the Ram Prospector is designed to perform just as well as a stock truck, even though it’s riding over 37-inch tires. AEV Ram Prospector standard features:
AEV Premium Front Bumper
Warn Industries 16,500-pound winch
Front bumper lighting
AEV 3-inch DualSport SC suspension
AEV 17-inch alloy wheels
BFGoodrich 37-inch KM2 Mud-Terrain tires
Bed-mounted fullsize spare tire
AEV windshield banner
AEV anti-glare hood decal
AEV Prospector badge
AEV grille and tailgate badges
AEV cluster badge
Painted grille and rear bumper
Black fender flares
AEV logo headrests
AEV build plaque
AEV ProCal module
Dual-Duty Design
The Prospector package is made to suit everyone, from workers who need a lifted truck for remote off-road job sites to the retiree who wants to install a camper shell and travel the world to adventurers who need to tow a boat or fill the bed with motorcycles after a long work week. To unlock optimal off-road use without detracting from the factory performance and safety, the Prospector setup retains a number of suspension parts used on stock trucks.
Since Ram uses different spring packages for almost every variation of the 2500 and 3500 trucks, AEV takes advantage of the science behind those R&D selections. In front, factory radius arms are relocated and a billet aluminum spacer is used to move the axle forward by 1 inch. The stock springs are used along with unique coil spring spacers designed to clock the axle and keep the geometry within the design of the factory alignment, even with the added lift height.
The steering is built to reduce bumpsteer and correct the roll-center height of the front suspension with the use of a drag link, track bar, and a raised track bar tower designed by AEV. Rear coil springs are lifted with 2-inch blocks, and custom Bilstein 5100 shocks are used at all four corners. AEV worked directly with Bilstein to create shocks for the DualSport SC Suspension System that includes digressive valving for comfortable low-speed cruising along with firm performance for towing and high-speed off-road travels. 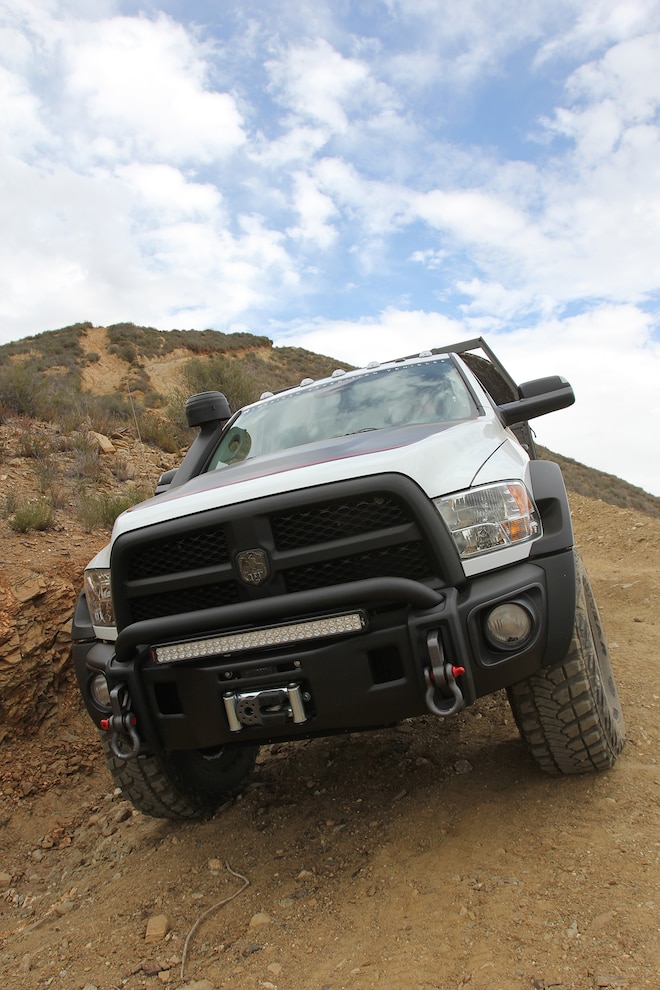 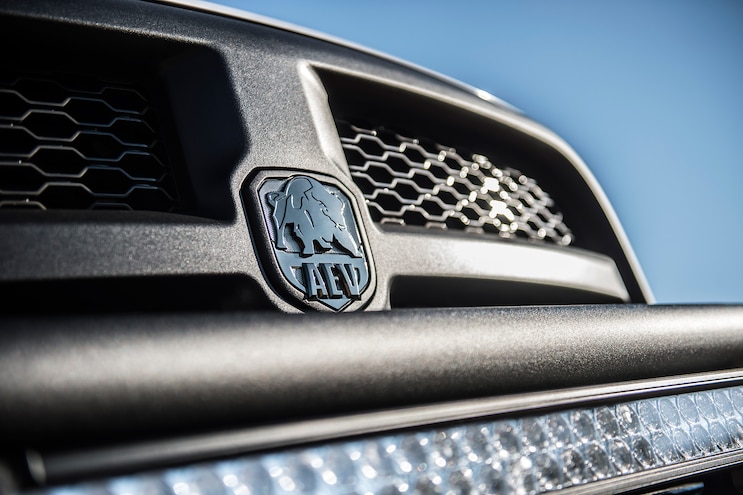 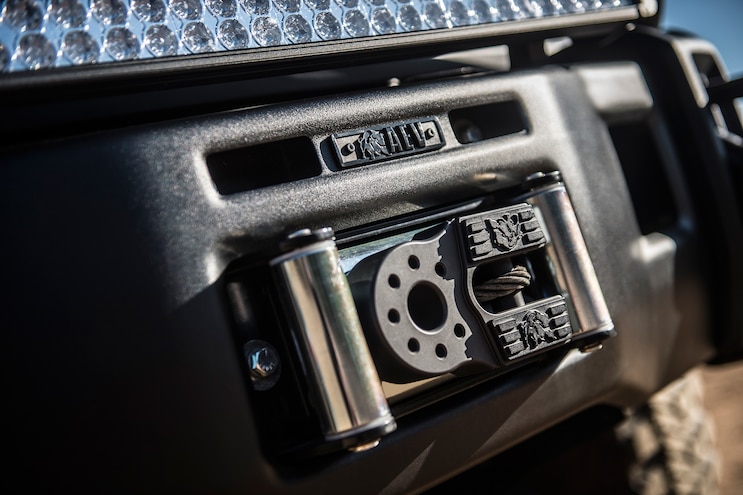 View Photo Gallery | 27 Photos
Photo 7/27   |   006 2015 AEV Prospector Dodge Ram 2500 Diesel 16500 Pound Warn Winch AEV Tow Hook
Hidden behind the AEV Premium Front Bumper is a 16,500-pound winch by Warn Industries.
Style and Strength
The AEV Premium Front Bumper is unique because it’s made of 3/16-inch stamped steel, which allows for the stylish curved appearance while providing maximum protection from obstacles. It includes tow hooks connected to the frame that are made of nodular cast iron (with a capacity of more than 30,000 pounds) and have a side load rating of 18,000 pounds. The bumper is also equipped with a 16,500-pound winch by Warn Industries and includes spaces for the factory fog lamps, or upgraded lamps by Vision X.
The optional Raised Air Intake (don’t call it a “snorkel”) is designed to feed cool and clean air directly to the engine by staying above the level of trail dust (along with keeping the charge dry during water fording). It can be ordered with a cyclonic pre-filter that spins while air is being sucked into the housing to fling dirt and other particles out before they can get into the intake tube. Along with working in trail ride conditions where you’re constantly driving through a cloud of dust from the lead trucks, the pre-filter helps keeps the air charge clean during long periods of idling at an active work or camp site. 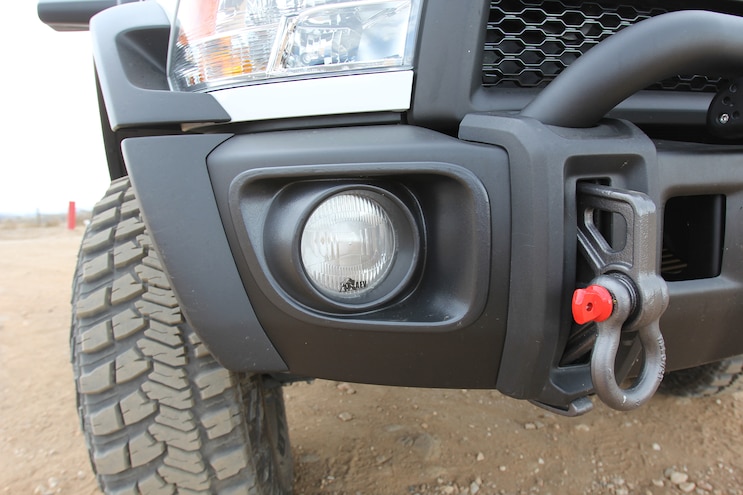 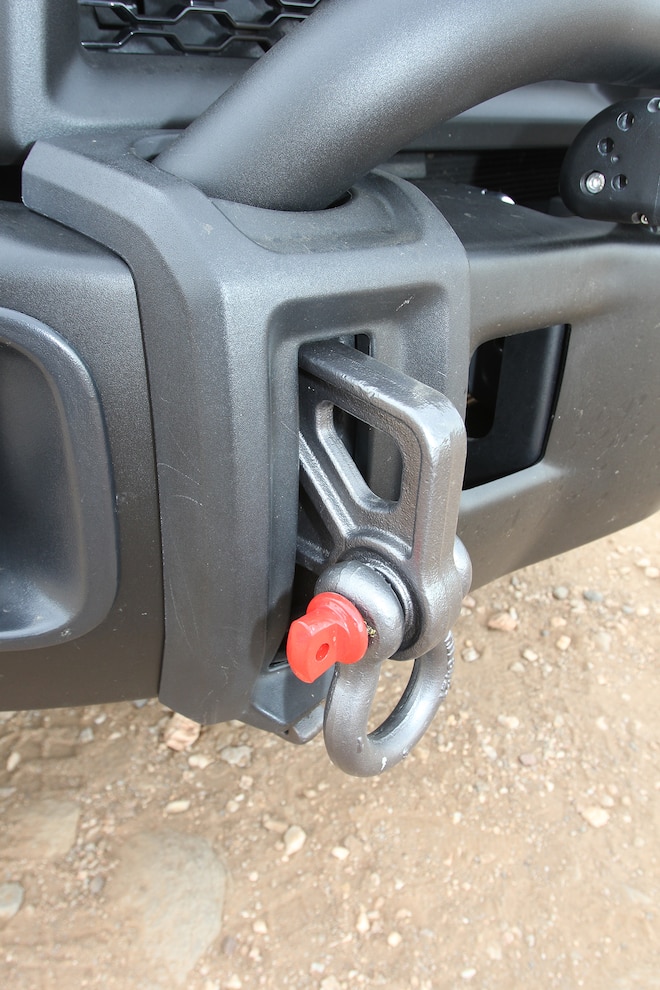 View Photo Gallery | 27 Photos
Photo 9/27   |   008 2015 AEV Prospector Dodge Ram 2500 Diesel Front Bumper 30000 Pound Tow Hook
The tow hooks have sliders to prevent damage from obstacles and are rated to handle more than 30,000 pounds. They also have side-load ratings of 18,000 pounds.
Off-Road Adventures
Driving the AEV Prospector is much like piloting a stock truck—and that’s a compliment. The stable ride is welcome both on- and off-road, and the braking and steering response are excellent even with the increased ride height and large tires. The regular cab Ram 2500 flatbed we drove was fitted with a six-speed manual transmission and a 6.7L Cummins with stock programming, along with the standard AEV ProCal module that corrects for the tire size and other functions. The Prospector’s ride height was not overwhelming, and it was definitely welcome when we approached obstacles on the trails around the Rowher Flat Off-Highway Vehicle Area in Southern California. The truck was also very comfortable and predictable during tight U-turn maneuvers and street-style driving.
Since a KTM 1190 Adventure R motorcycle was mounted in the bed, we asked our friends at Dirt Sports + Off-Road to test out the high-tech traveling bike with a two-cylinder four-stroke engine that makes 148 hp. It uses Bosch MSC (Motorcycle Stability Control) with lean-sensitive traction control and antilock brakes to keep you and the 518-pound bike on the right path. You can see GoPro video of the ride on trucktrend.com. 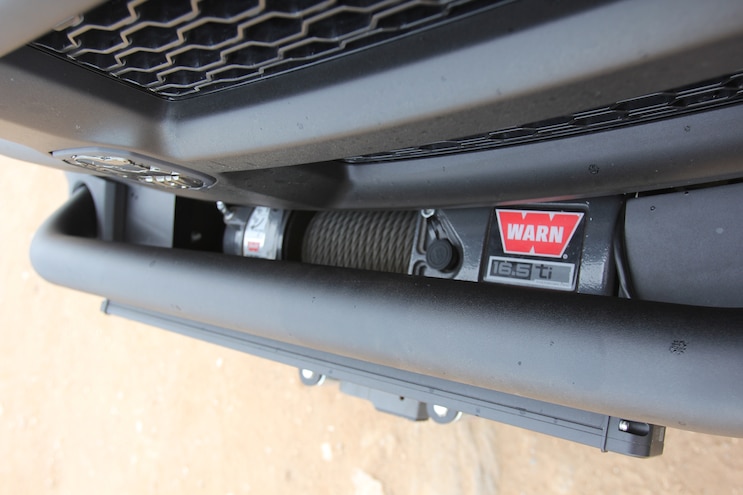 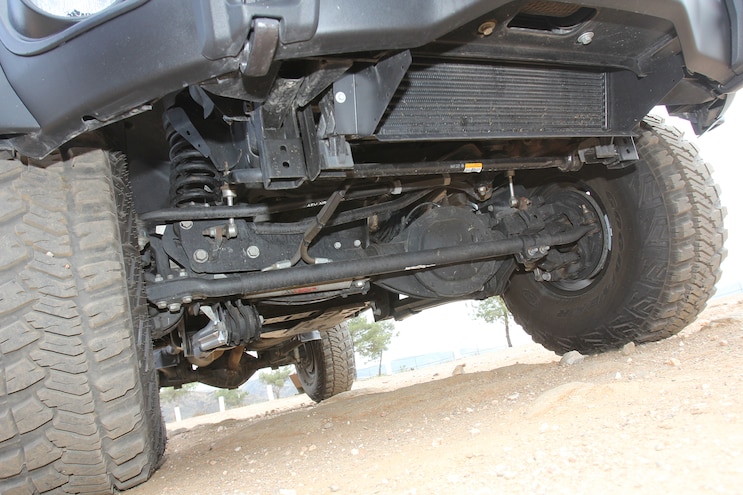 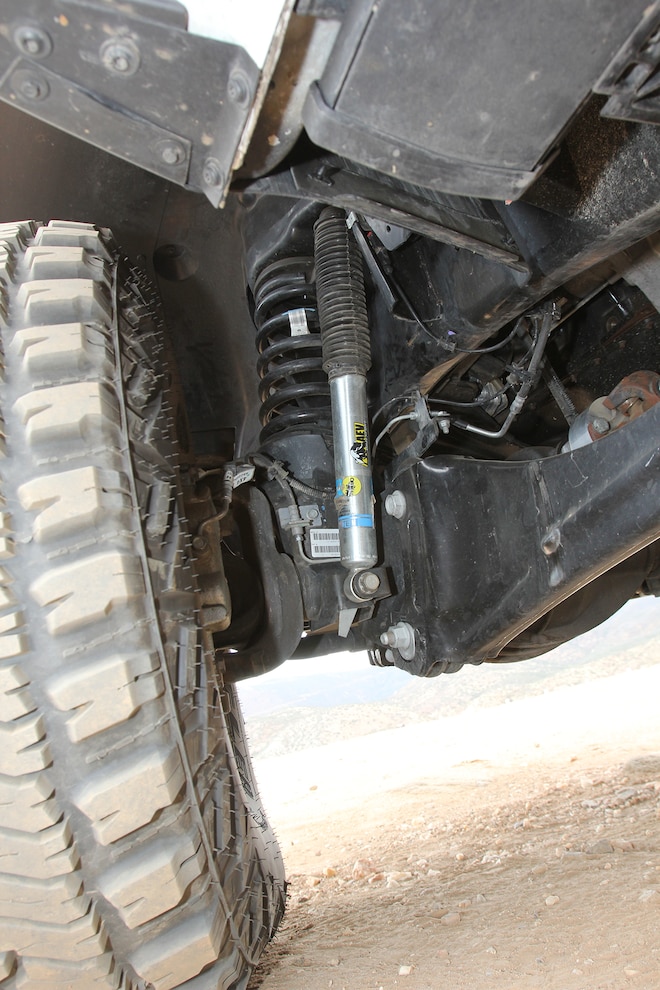 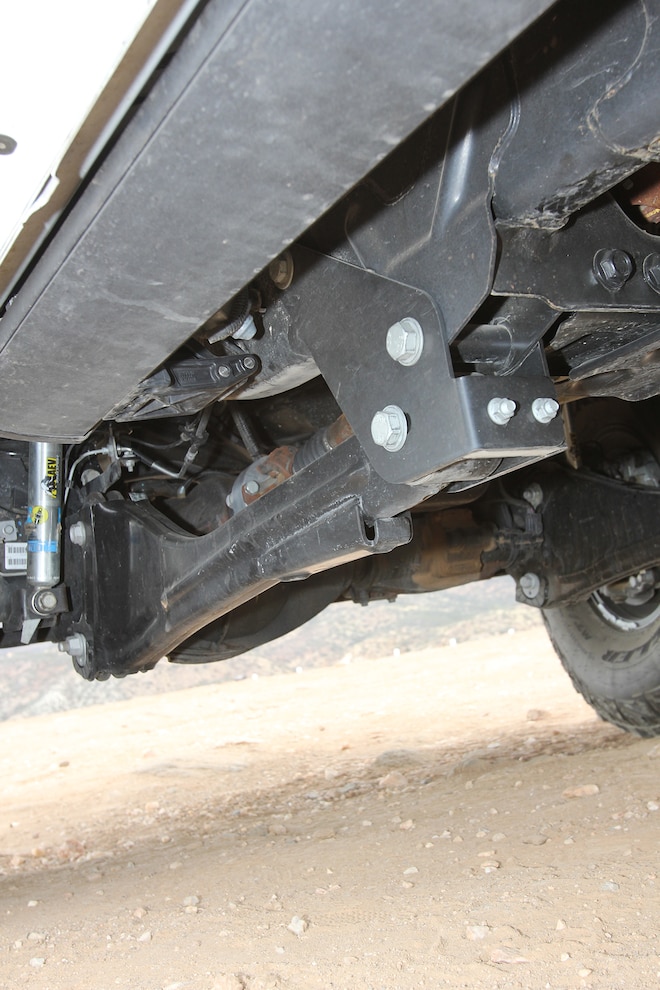 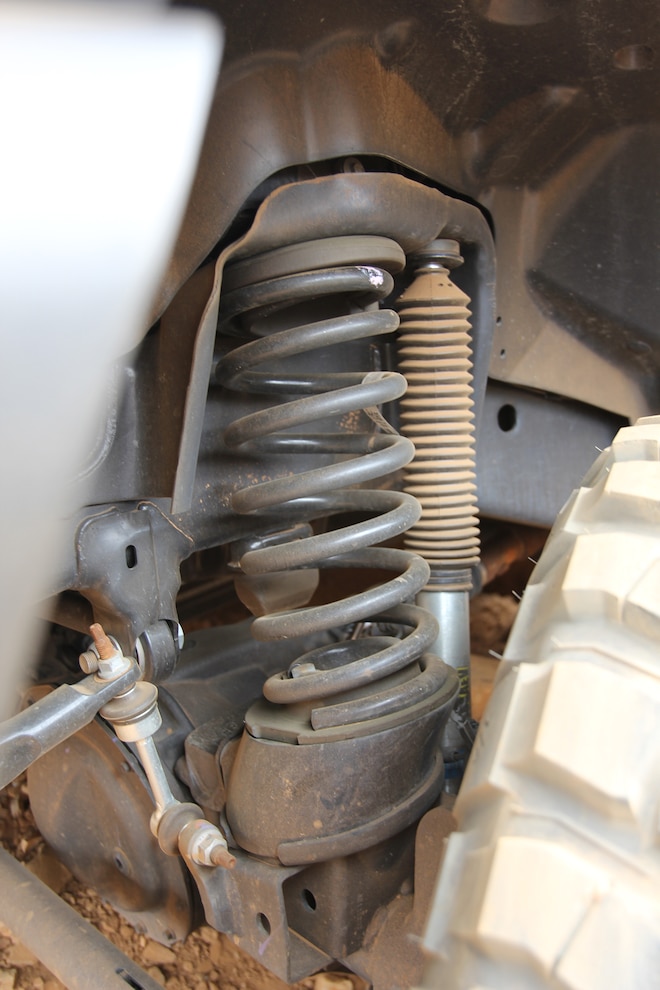 View Photo Gallery | 27 Photos
Photo 14/27   |   013 2015 AEV Prospector Dodge Ram 2500 Diesel Front Suspension Custom Coil Spacers
The DualSport suspension retains the factory springs since Ram trucks have more than 50 different combinations of front and rear coils based on the equipment packages ordered, payload, GVWR, and so on. By using 3-inch cast-aluminum spring relocation spacers, the setup takes full advantage of the factory engineering of the spring rates and frequencies, even with the additional height of the lift. 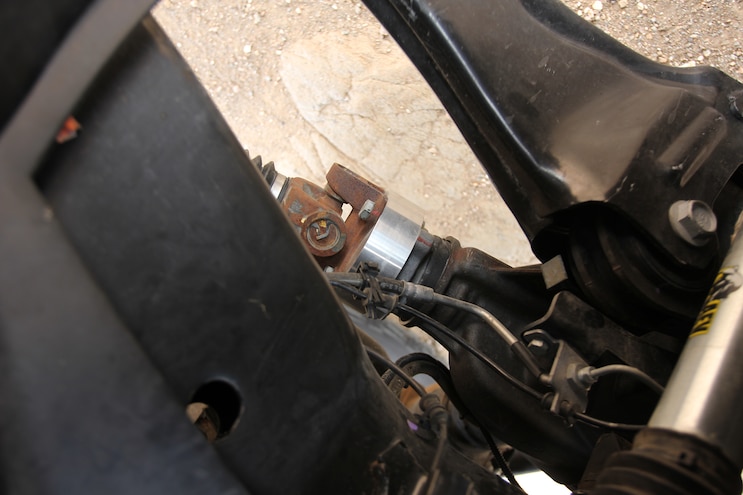 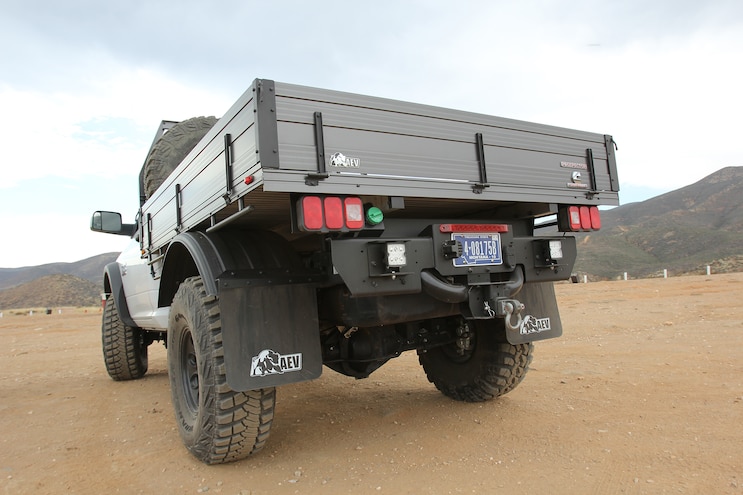 View Photo Gallery | 27 Photos
Photo 16/27   |   015 2015 AEV Prospector Dodge Ram 2500 Diesel Flat Bed Rear View
The Ram 2500 we drove was fitted with a flatbed to demonstrate the flexibility of the platform. Whether you want a Ram fitted with a camper for overland world travels, a pickup to haul and tow toys, or a fully capable work truck, there’s a Prospector model ready for the task. 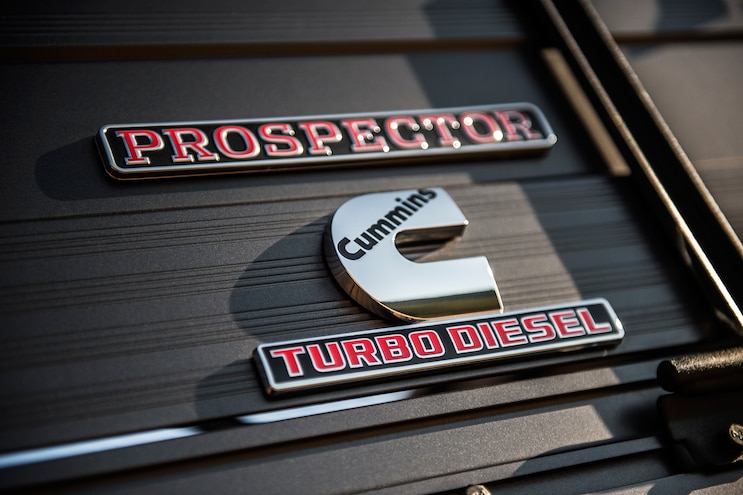 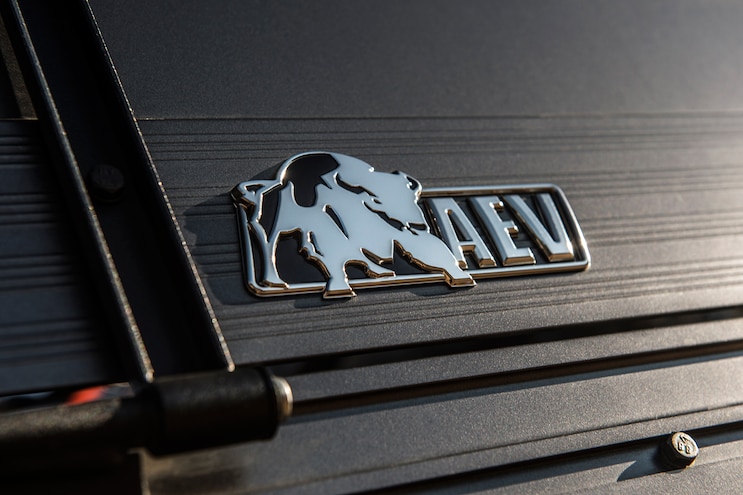 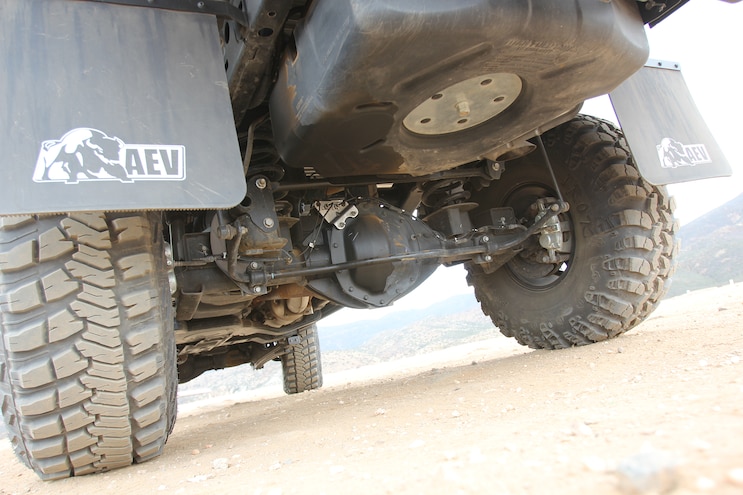 View Photo Gallery | 27 Photos
Photo 20/27   |   019 2015 AEV Prospector Dodge Ram 2500 Diesel And KTM 1190 Adventure R High Speed Off Road
We got to experience the effectiveness of AEV’s DualSport suspension at Rowher Flat Off-Highway Vehicle Area, north of Los Angeles, California. Except for the tall ride height, it’s hard to tell any differences between the suspension damping and stability of the Prospector compared to a stock Ram with a diesel engine—and that’s a very good thing. 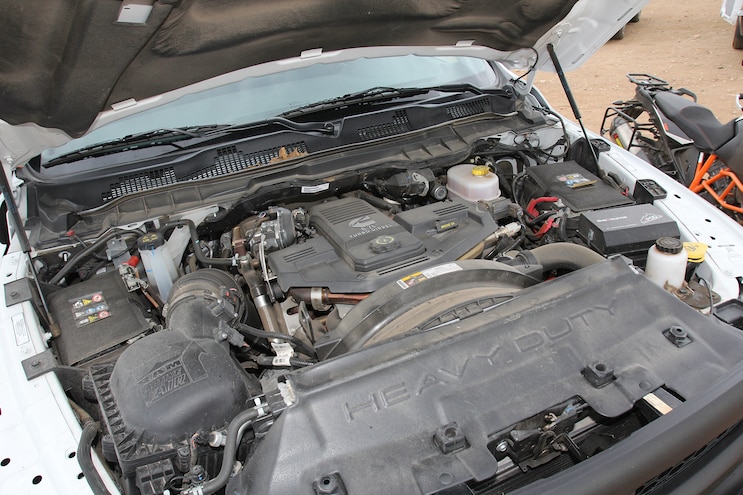 View Photo Gallery | 27 Photos
Photo 21/27   |   020 2015 AEV Prospector Dodge Ram 2500 Diesel Cummins Engine
An AEV ProCal module is the only modification added to the factory’s 6.7L Cummins diesel engine. Along with correcting the speedometer for the 37-inch tires, the ProCal allows owners to increase idle speed during winching and recalibrate the tire pressure monitoring system for optimal performance of the stability control system. 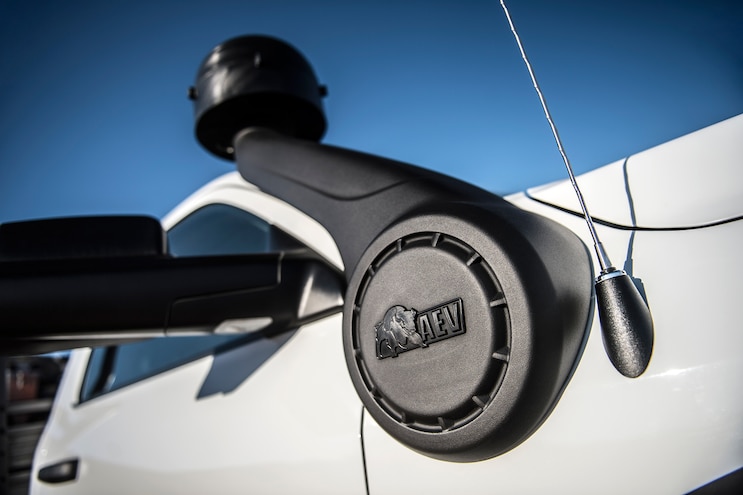 View Photo Gallery | 27 Photos
Photo 22/27   |   021 2015 AEV Prospector Dodge Ram 2500 Diesel Raised Air Intake With Centrifugal Pre Filter
The AEV Ram Prospector is available with a raised air intake with a centrifugal pre-filter. Along with providing added height for water fording, the kit is designed to be tall enough to avoid trail dust from lead vehicles. The pre-filter also ensures clean air during extended idling during work in dusty conditions by spinning dirt to the outside of the housing so it can drop free of the intake. 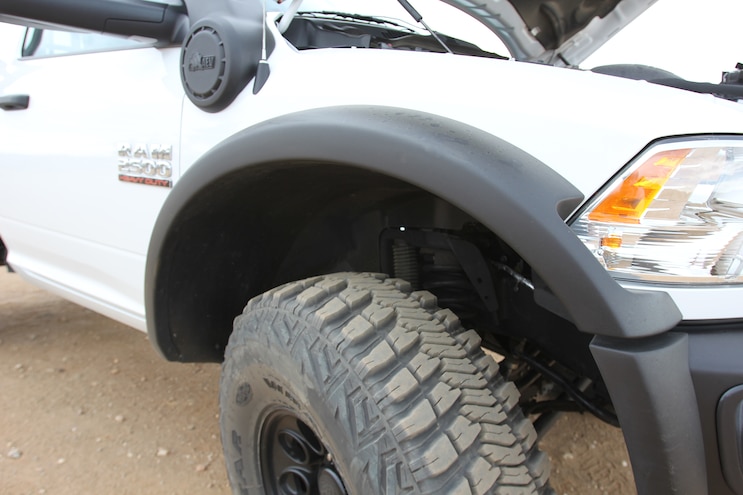 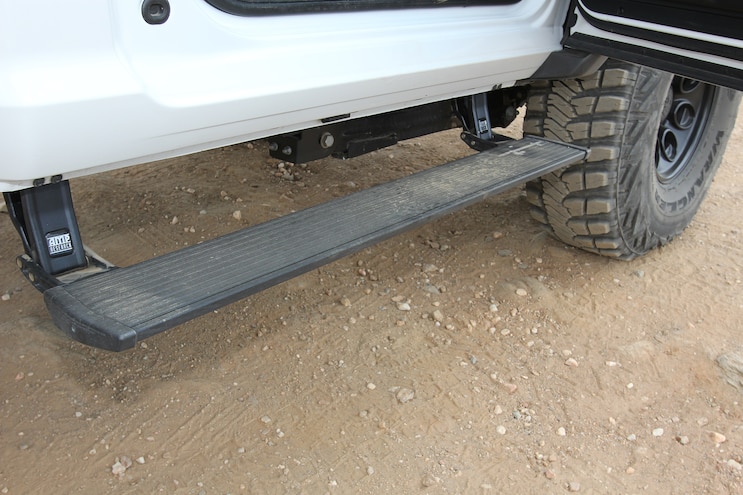 View Photo Gallery | 27 Photos
Photo 25/27   |   024 2015 AEV Prospector Dodge Ram 2500 Diesel AMP Research Powered Side Steps
Powered side steps from Amp Research are optional and make it easy to get into the lifted truck, and they tuck away for clearance during off-road adventures. 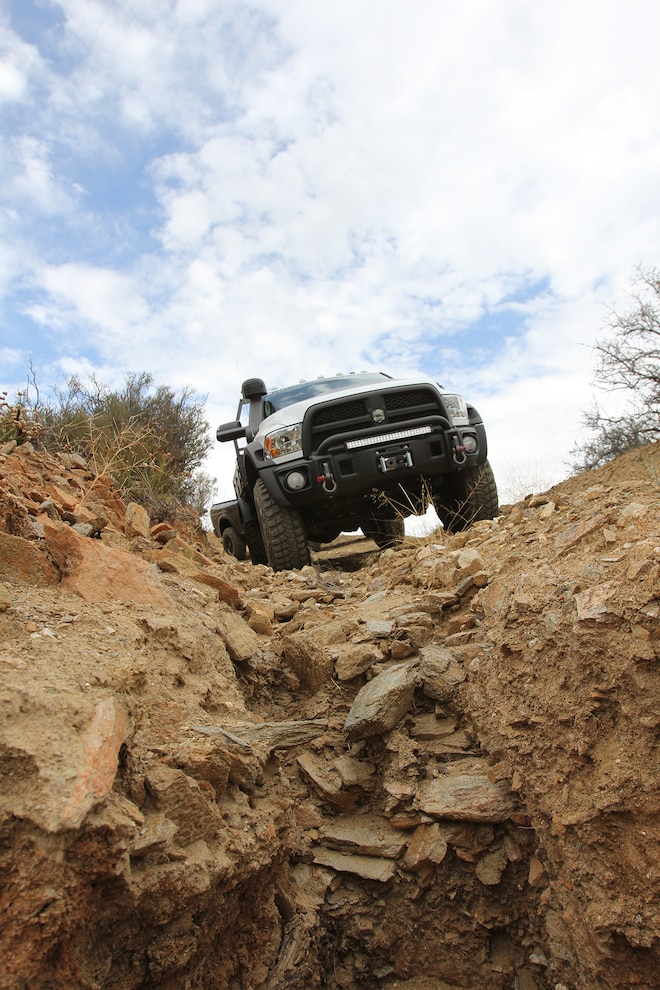 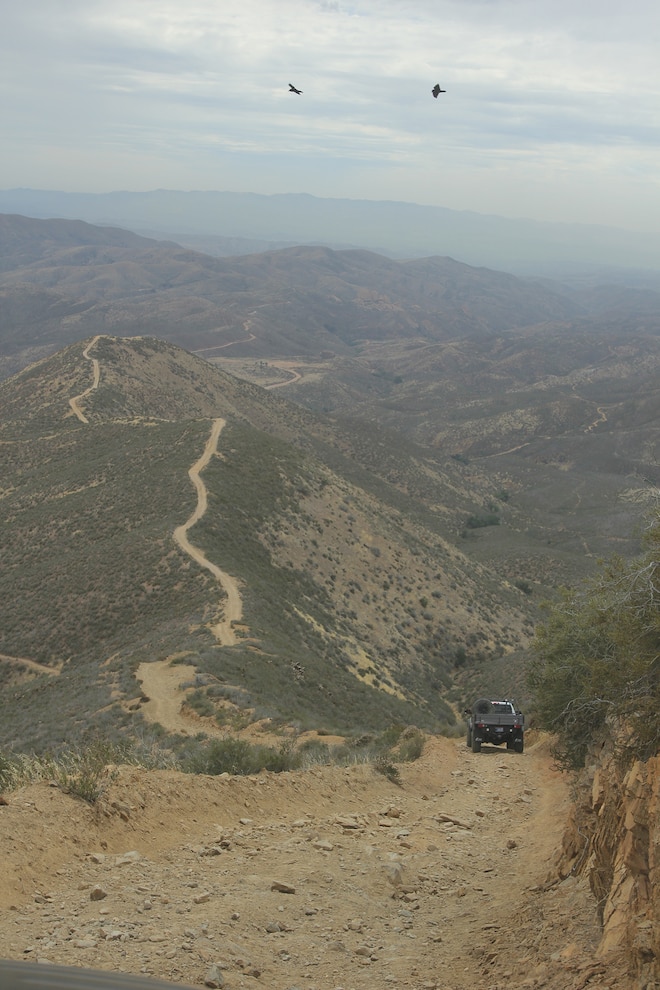