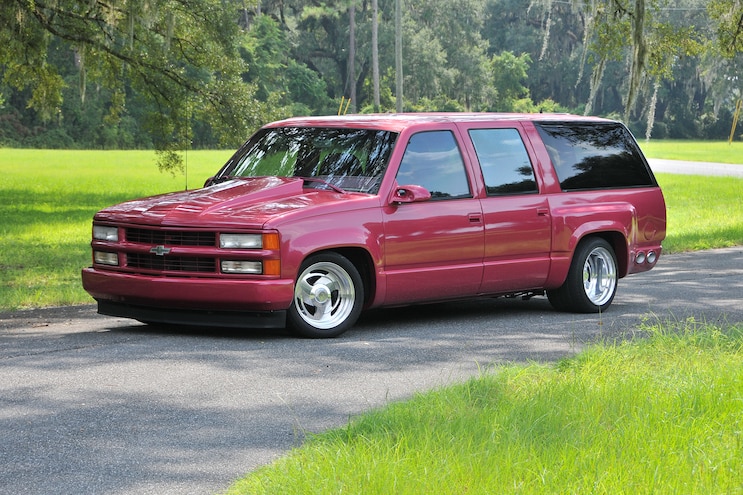 Here at Truckin’, you can always count on us to bring you the latest trends and newest technology from around the world. Every now and then, though, we like to highlight influences from the past. Call it automotive archaeology, if you like. Dusting off where you’ve been can often define where we’re heading. This ’94 Suburban is a great example. While some of the lines and upgrades are clearly dated, it was ahead of its time in many ways and even today, could humble most modern vehicles in the performance department. 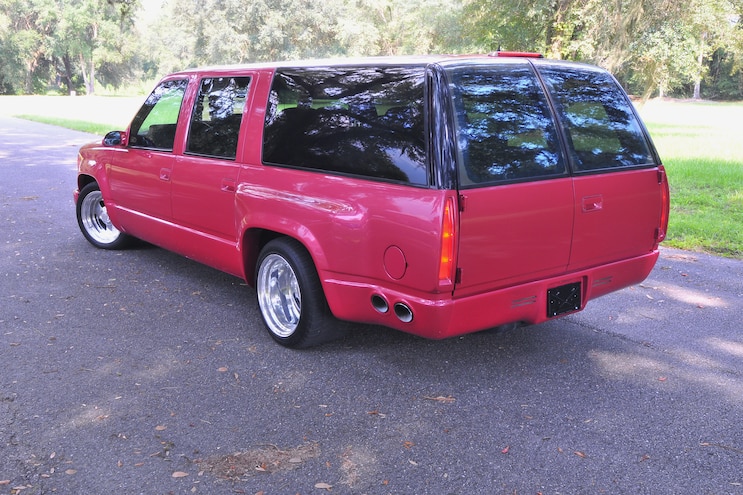 View Photo Gallery | 9 Photos
Photo 2/9   |   02 1994 Chevrolet Suburban
Chris Dobbs, owner of Huegenics in Trenton, Florida, builds magazine-quality custom cars and trucks regularly. Although Dobbs had just graduated from high school when this '94 Suburban was built, he is now the proud owner. Mark III Industries in Ocala, Florida, was one of the largest van-conversion companies as of ’90 and built this one way back when. Purchased in late ’93, the company created this Suburban as a running advertisement for its conversion line. As one of the first steps in the conversion, the new truck was dropped off at Lingenfelter Performance, where it received a whopping $38,000 worth of engine modifications.
Once complete, Mark III brought it back to its facility in Ocala to upgrade the interior. The company showcased the vehicle for several years, around the world. Dobbs believes it even spent time on Germany’s Autobahn. It was purchased from Mark III in ’98 with only 550 miles on it. The second owner thoroughly enjoyed the truck until selling it to Dobbs this year. Garage-kept its entire life, it still only has slightly more than 11,000 miles. 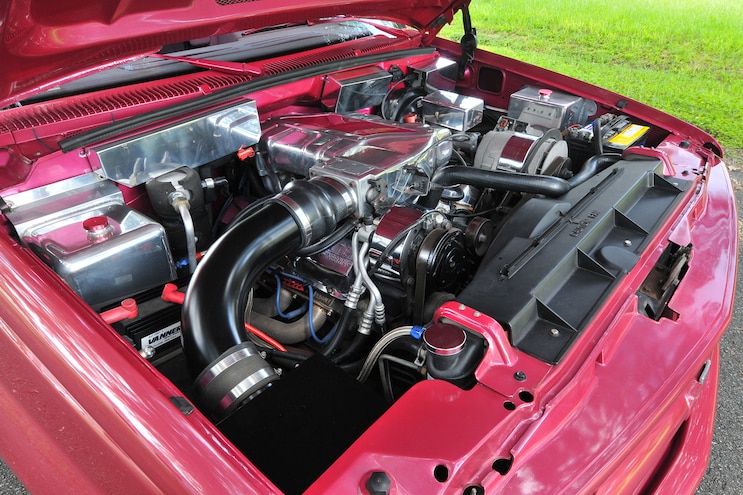 View Photo Gallery | 9 Photos
Photo 3/9   |   04 1994 Chevrolet Suburban
When the Mark III Suburban arrived looking for a big horsepower increase for a large vehicle, Lingenfelter used its previous R&D work building a Saudi vehicle. The team created a second version of the Saudi big engine for this truck. One customer in Saudi, Arabia, wanted the 230hp factory motor in his highly modified, 9,000lb armored Suburban made significantly stronger. Could they build something to ensure his vehicle could move out smartly, should the need arise? Lingenfelter began the Saudi project by selecting a monstrous 605ci marine block, strong enough for a genuinely dramatic horsepower increase. A forged rotating assembly made up the internals, a high-lift Comp hydraulic roller cam worked the valves, and modified Brodix Big Brodie heads were ported and polished to ensure free breathing. The engine used a modified GM fuel injection with a Mercruiser intake fitted with a cold-air intake. Hooker Super Comp headers and DynoMax Ultra Flo mufflers scavenge spent gasses. According to a Car and Driver article written about the Saudi vehicle at that time, the engine produced a stout 550 horsepower with a staggering 705lb-ft of torque. Amazingly, the engine came out emissions legal, equipped with a catalytic converter, and an O2 sensor. Of the $38,000 price tag, $10,000 was devoted to emissions testing. Lingenfelter upgraded the 4L80E transmission with a modified valve body, heavier duty parts, and a unique adjustable shift kit control mounted on the firewall. 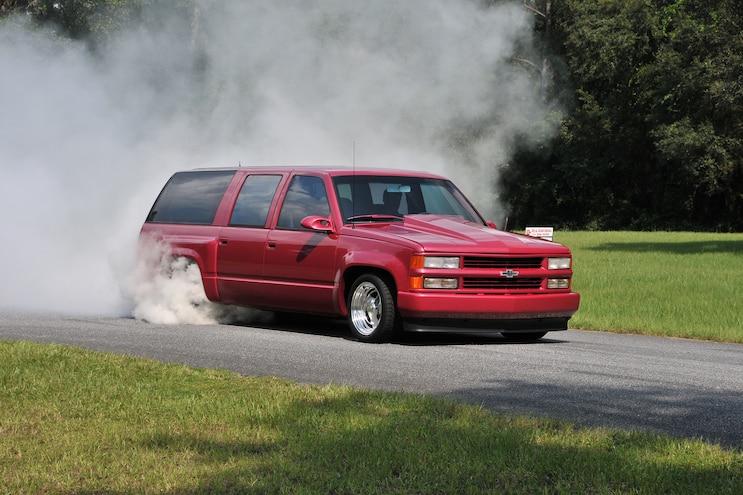 View Photo Gallery | 9 Photos
Photo 4/9   |   03 1994 Chevrolet Suburban
The Suburban got the same treatment. Once the horsepower upgrade was complete, the Mark III team brought the Suburban back to their headquarters in Ocala and began to improve the handling. The design kept the factory upper control arms and spindles, but modified the lower control arms to achieve a lower ride height. The beefed and lowered rear retained the GM leaf spring suspension with factory shocks, but augmented with a second pair of air shocks in order to tow the painted-to-match, company trailer. The controls for the onboard compressor reside in the glove compartment. 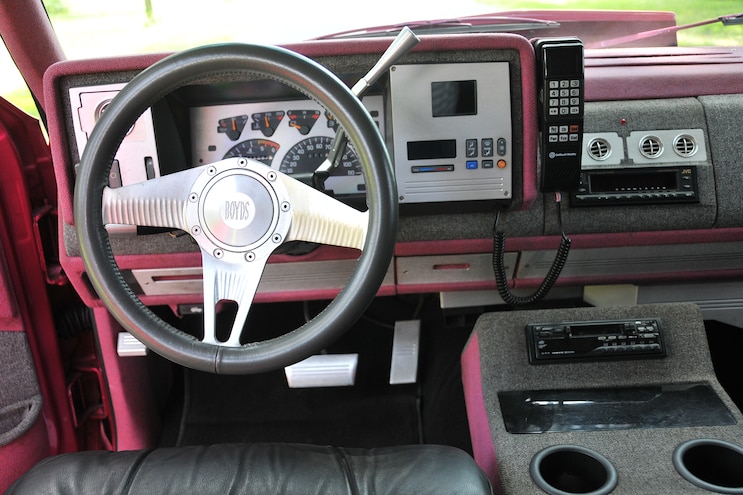 View Photo Gallery | 9 Photos
Photo 5/9   |   07 1994 Chevrolet Suburban
Inside, however, is where all the early-’90s fun begins. The Mark III team fabricated the unique aluminum trim pieces on the dash, door panels, rearview mirror, pedals, and under the hood. The stock Suburban seats were re upholstered in black leather with (cool-for-the-times) pink-and-gray tweed. Four separate buckets and a third row bench seat mean the truck can entertain seven people comfortably. The door panels came equipped with magazine racks, presumably loaded with copies of Truckin’ for passengers to enjoy. 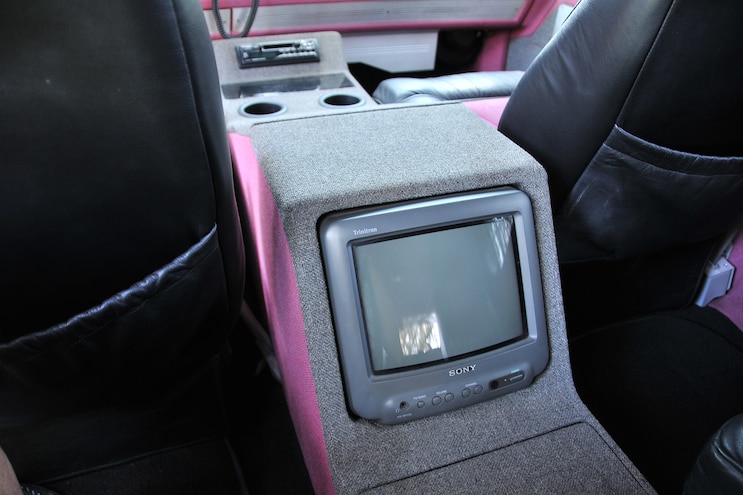 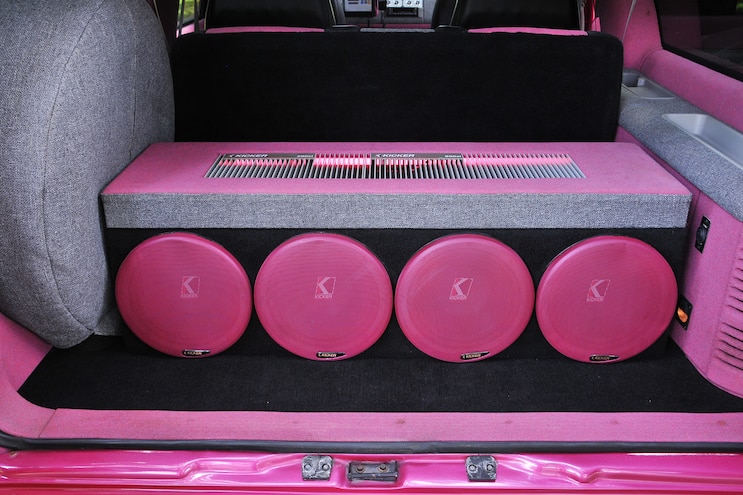 View Photo Gallery | 9 Photos
Photo 7/9   |   06 1994 Chevrolet Suburban
A perfect road trip ride, the Suburban features dual air-conditioners, and an elaborate audiovisual system that includes a JVC AM/FM headunit, cassette player, and graphic equalizer to control the pair of Kicker amplifiers and multiple Kicker speakers throughout the cab. The center console has a rear-facing Sony Trinitron monitor connected to a motorized, pop up VCR. Hey, it was a state-of-the-art addition in its day and the forerunner of the DVD Home Theater approach found in today’s rides. The rear hatch houses a full-width, upholstered sub enclosure sporting four 12-inch Kicker subs facing rearward, along with a top-mounted 500 Watt, single-channel amp for the subs, and a four-channel, 200Watt amp for the front stage. Four capacitors and four small auxiliary batteries are tucked behind the enclosure, presumably to allow the stereo to entertain when the truck was on display at a show. Tweeters are mounted in the overhead and on either side of the dash. Component sets sit in each of the doors with an additional pair of mids mounted up front on either side of the dash. Although, the antique bag phone may be a reminder of an earlier decade, (it still works!), the stereo sounds as good as any modern system. It even has a rear-view camera, aimed out the rear window with a small screen on the dash. 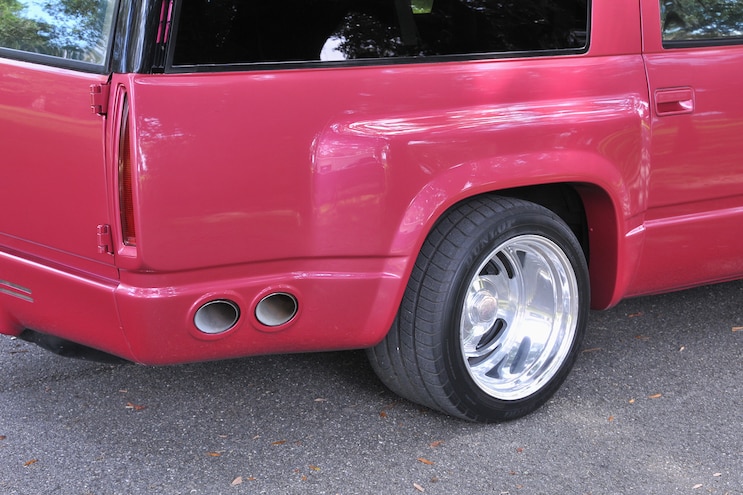 View Photo Gallery | 9 Photos
Photo 8/9   |   09 1994 Chevrolet Suburban
The truck runs a Boyds steering wheel and matching Boyds wheels, 17 x 9.5 up front and fat 17 x 13s in the rear. Body mods on the Suburban were conservative with a cowl-induction hood, painted-to-match grille and front bumper, custom side mirrors, a deleted rear bumper with a custom roll pan, flip-down license plate, Cadillac taillights, and dual exhaust tips cut into both rear fenders. The truck is painted a modified S-10 color popular in the ’90s, Magenta with a Pearl overlay. 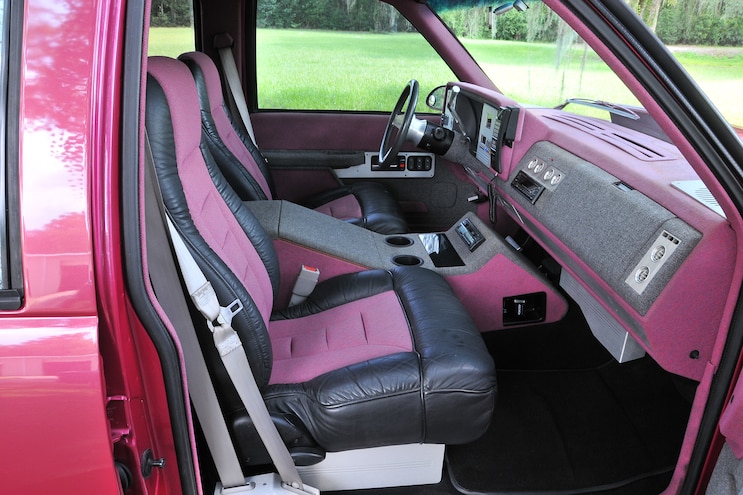 View Photo Gallery | 9 Photos
Photo 9/9   |   05 1994 Chevrolet Suburban
Dobbs grins when he says, “It was an $80,000 build 20 years ago and still has only 11,000 miles on it. It’s something you don’t see anymore, with lots of cool features done back in the day, making it a true time machine.” What are the future plans? Chris is undecided about whether he will pass the truck along to another enthusiast or use the high-performance power plant and accessories to create another magazine-worthy, Huegenics shop creation, but he’s sure going to enjoy it in the meantime