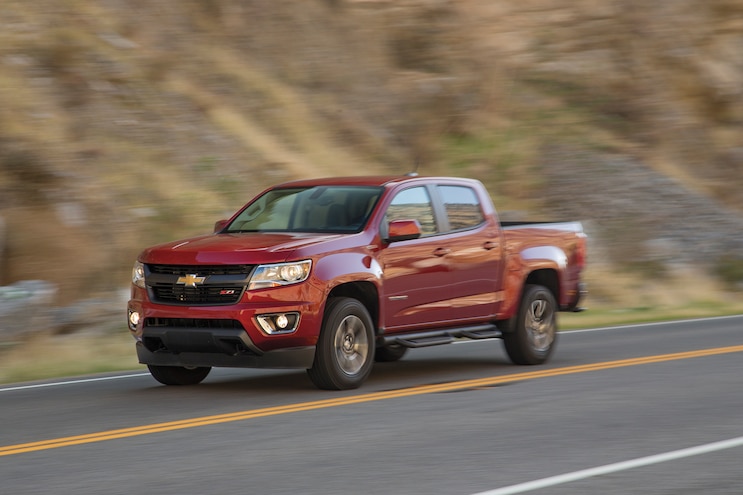 Anticipation ran high for the Chevrolet Colorado diesel as soon as it was announced, which was concurrent with the introduction of the new model for the ’15 model year. However, it took a full model year for the Duramax diesel-powered pickup to reach dealers. Is it worth the wait? Certainly, if you’re a fan of the style and packaging of the Colorado and want real truck capability, the Colorado diesel hits the bulls-eye. The only thing that makes us somewhat ambivalent is the pricetag, which is steep enough on the gas-powered model. The Duramax adds nearly $4,000 to the Colorado’s bottom line. When you factor in the generous incentives you can usually get on fullsize models compared to nearly nonexistent sweeteners for this hot-selling newcomer, whether or not it’s worth its premium price is a real question.
Putting aside that elephant in the room for a moment, the Colorado made a lot of friends at this year’s Pickup Truck of the Year test. The seamless integration of Apple CarPlay and Android Auto ensure that it plays nice with nearly all smartphones. Proving that it’s a truck built for the 21st century, our Z71-trim Crew Cab model featured dual USB outlets in the rear seating area, assuring passengers can keep their mobile gizmos juiced up. Speaking of the rear seat, it’s reasonably roomy by midsize standards, being more comfortable than the Tacoma. However, it doesn’t have the stretch-out, cross your legs room of the fullsize models. For trips of a few hours or less for two adults, the rear seat is fine. However, we might recommend another choice for interstate road trips for a foursome. 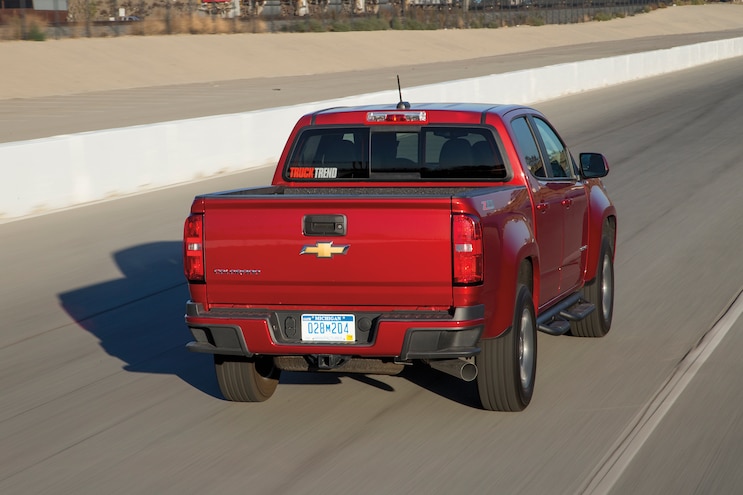 View Photo Gallery | 10 Photos
Photo 2/10   |   01 2016 Chevrolet Colorado Rear Three Quarter
Looking at the specs for the 2.8L I-4 Duramax diesel, the horsepower and torque figures give you a pretty good idea of the driving experience behind the wheel. The engine delivers a modest 181 hp at 3,400 rpm but a whopping 369 lb-ft at 2,000 rpm. Consequently, the power delivery is characterized by a Texas-sized helping of torque right off the line, which runs out of steam just above 3,000 rpm. In short, it’s no Top Fuel dragster. However, if you’re smart about how you drive it and keep it in the torque sweet spot, it scoots down the road with plenty of zip and will get up to and maintain highway speeds effortlessly. The sensation and character of its power delivery hardly changes under load, with the generous torque shrugging off the payload and towing burdens we put on it. It felt much more relaxed and confident than the 3.6L V-6 gas model we drove last year, which felt noticeably more frantic under load. The power and torque curves also play much better with the six-speed automatic transmission, holding gears longer than the peaky gas V-6, which frequently and abruptly downshifted under load. In terms of the engine’s NVH character, there’s no mistaking it’s a diesel. However, General Motors has done a commendable job of mitigating the noise and vibration inherent in a large-displacement I-4 diesel, employing such tricks as a spring-loaded torque converter damper, balance shafts, and a thick foam engine cover. Only in rare circumstances do you get the “magic fingers” sensation through the wheel or seats. 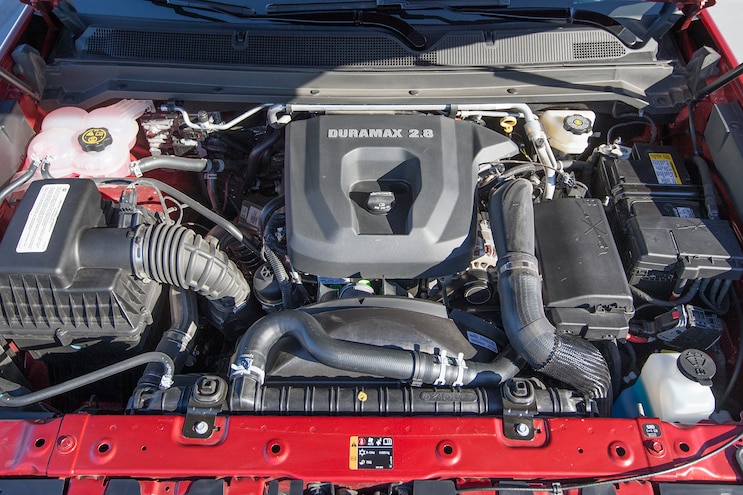 View Photo Gallery | 10 Photos
Photo 3/10   |   75 2016 Chevrolet Colorado Engine
We were especially impressed by the indicated 30 mpg on a 120-mile leg, which was a combination of two-lane highway, plenty of elevation changes, and wide-open interstate. We didn’t baby or hypermil it; we just drove it like we usually would between 65-75 mph.
With an auto-locking rear differential and low-range four-wheel drive, the Colorado acquitted itself well on our off-road trail test. The low-hanging front air dam made us a little nervous, and we did end up plowing the dirt and sand a few times. However, it stayed intact and showed minimal signs of wear and tear. We expect owners that regularly go off-roading will either trim a few inches off or simply unscrew it. 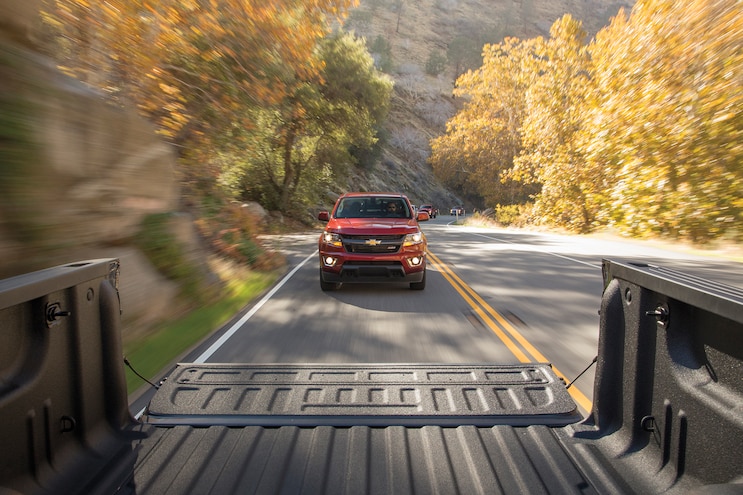 View Photo Gallery | 10 Photos
Photo 4/10   |   19 2016 Chevrolet Colorado From Bed
At the end of the day, whether or not the Colorado diesel is worth the more than $40k for a nicely equipped Z71 4WD Crew Cab is an open question. If you go by strictly the “all you can eat” quantitative yardstick, the Colorado comes up a little short compared to comparably priced fullsize models, especially factoring in the five-figure incentives you can often get on them. However, if you’re looking for a unique combination of real-truck towing and hauling capability, along with fuel economy comparable to a compact or midsize crossover, a city and suburb-friendly size, and aren’t afraid to pay a premium for it, the Colorado diesel is in a class of its own.
- Edward A. Sanchez
WE LIKE: Diesel torque, great fuel economy. Intuitive control interface and tech connectivity.
WE DON’T LIKE: A little short on horsepower, even for a diesel. Value equation compelling for some, not for others.
LEAD IMAGE: The Colorado brings a unique proposition to the midsize market with outstanding fuel economy and towing and hauling capabilities that rival fullsize models. 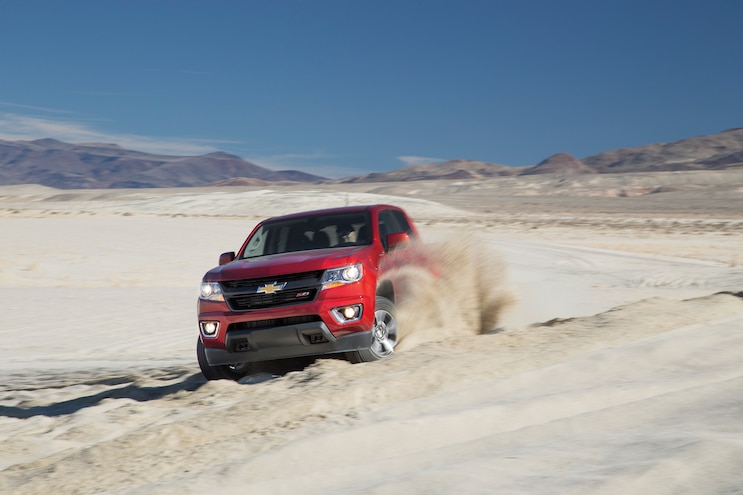