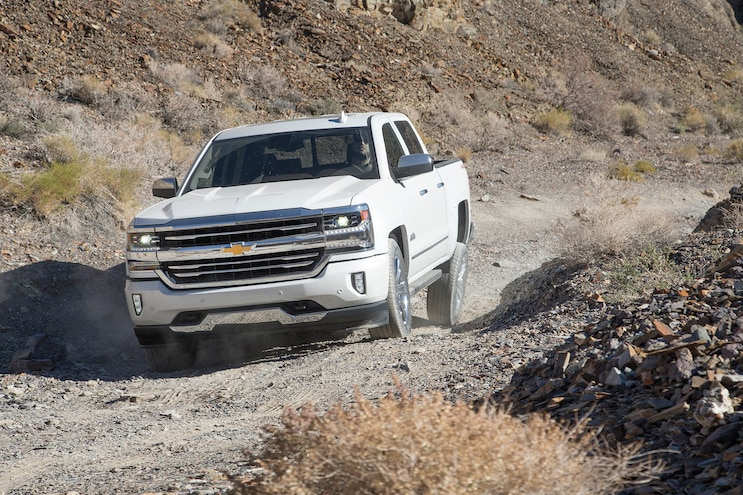 The ’16 Chevrolet Silverado 1500 High Country earned an invitation to the 2016 Pickup Truck of the Year competition thanks to its wholly updated appearance and newly available eight-speed automatic transmission/5.3L EcoTec3 V-8 configuration. But in spite of the updates, nothing we loved about last year’s 2015 entrant changed. The ’16 High Country was just as comfortable, spacious, and luxurious as last year’s Silverado, and although it was down on power compared to 2015 (that truck had a 6.2L V-8), the eight-speed transmission did a great job maximizing the engine’s still-impressive output.
Our High Country was extremely well equipped, with leather seating, Chevrolet’s MyLink infotainment system, Apple CarPlay (which worked most of the time), power-deployable running boards, LED daytime running lights, navigation, in-car Wi-Fi, and heated and ventilated front seats. Returning for 2016 was a smooth ride, and the quiet interior had no equal save that of its GMC Sierra cousin. It was the one we all wanted for our commutes at the end of the day, and we fought over its keys when it was time to go home. 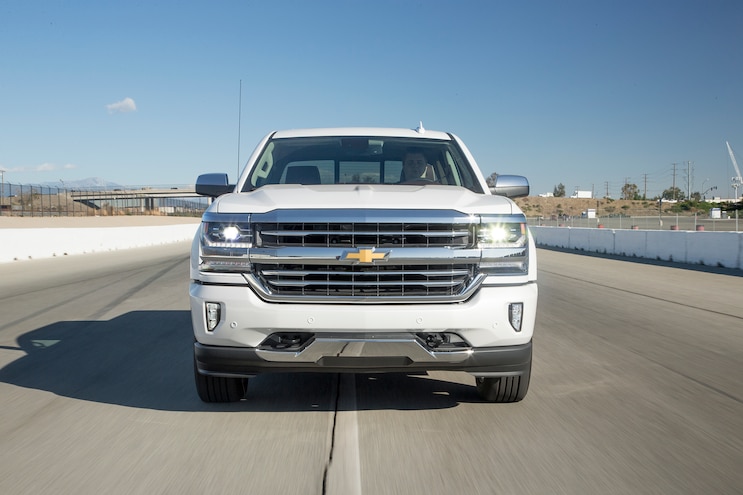 View Photo Gallery | 13 Photos
Photo 2/13   |   92 2016 Chevrolet Silverado High Country Front
Making 355 hp and 383 lb-ft, the 5.3L V-8 had no trouble moving the truck into traffic, and with more gear ratios to choose from, the transmission kept the engine in the powerband decently enough. However, there’s still a healthy portion of GM-signature gear hunting, since transmission upshifts happen as early and often as possible for fuel economy. Unfortunately, this led to some unpleasant sudden downshifts on full-throttle passing and merging maneuvers, but the transmission’s gear spread helps mitigate the problem somewhat. Although down on power compared to the GMC Sierra Denali (which came to our test sporting a 6.2L V-8), in most situations, the Silverado felt better than adequate.
Towing and hauling cargo was a non-issue in the Chevy. Loaded with a trailer or a bed full of rubber mats, the Silverado had more than enough power for city driving, uphill freeway onramps, and merging into traffic. Brakes and steering were light and overboosted (a GM trademark), but they were easy to modulate and accurate enough. For most work-truck situations, the High Country would be a fine companion, given you’re willing to put your $60,000 truck to the test. 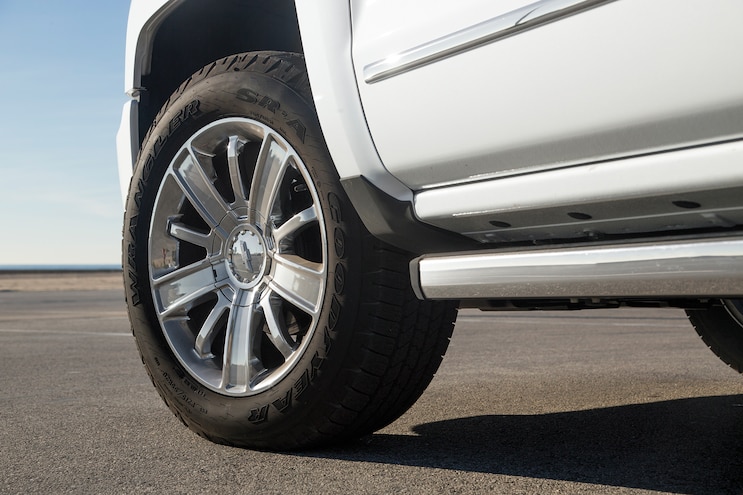 View Photo Gallery | 13 Photos
Photo 3/13   |   97 2016 Chevrolet Silverado High Country Wheel
The power-deployable running boards helped solve one of our biggest complaints about last year’s High Country, its atrocious ground clearance. The ’15 Silverado we tested had fixed running boards, which seemed to be magnets for every boulder we came across. The problem is almost completely solved with the ’16’s optional power steps. A few moments after we climbed aboard and shut the doors, the running boards tucked against the lower rockers, making room for the rocks and debris that pockmarked our off-road drive loop. Artful driving kept the High Country’s belly unscathed, thanks to those power running boards that got out of their own way when the going got rough.
One problem Chevrolet didn’t solve with the ’16 refresh was the interior’s awkward color scheme. The leather seating and dashboard plastics were supposed to be adorned in the same hue of brown, but the different materials manifested with two distinct earthy shades. That made the interior’s design look busy and disjointed when combined with the black, chrome, metallic, and wood bits elsewhere inside. Chevrolet could solve much of the problem by wrapping the dash in leather or leaving the dash plastics black. Is it just us or does all fake wood trim look like the imposter it is? 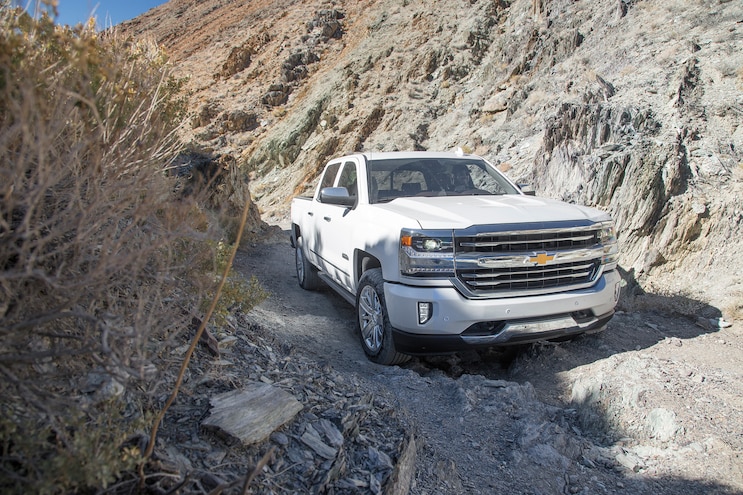 View Photo Gallery | 13 Photos
Photo 4/13   |   39 2016 Chevrolet Silverado On Trail
Drawing split opinions was the ’16’s significant front-end restyling. Many of us, this author included, love the technological, sporty look the new front clip has, with an aggressive design to the full-LED headlights and daytime running lamps. The new look establishes some familial resemblance with the smaller Colorado pickup, while still looking appropriately blocky. Others felt the grille and hood design were a tad overblown. People who think that are wrong, though.
Overall, the ’16 Silverado 1500 High Country left us with mostly the same opinions as last year’s truck. Its 5.3L V-8 was powerful and torquey enough for most situations, long-haul comfort was among the best in the test, and styling was chromey, classy, and sleek. Its powertrain was well suited to the application, and in general, it stood out as a solid competitor in most respects.
By Brett T. Evans
WE LIKE: Small-block Chevy rumble. Apple CarPlay is easy to use and works fairly well. Still has the best ride in the test.
WE DON’T LIKE: Front-end styling drew split opinions. Adequate in every way but never a standout. Too many colors and textures in the cockpit.
LEAD IMAGE: Featuring a newly available 5.3L V-8/eight-speed transmission powertrain combination, the ’16 Chevrolet Silverado 1500 High Country was a jack of all trades, but a master of none. 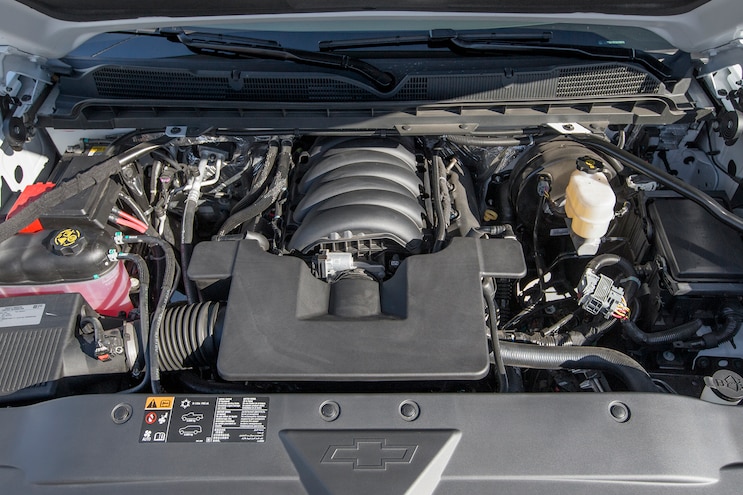