Upholding a Reputation for Fun 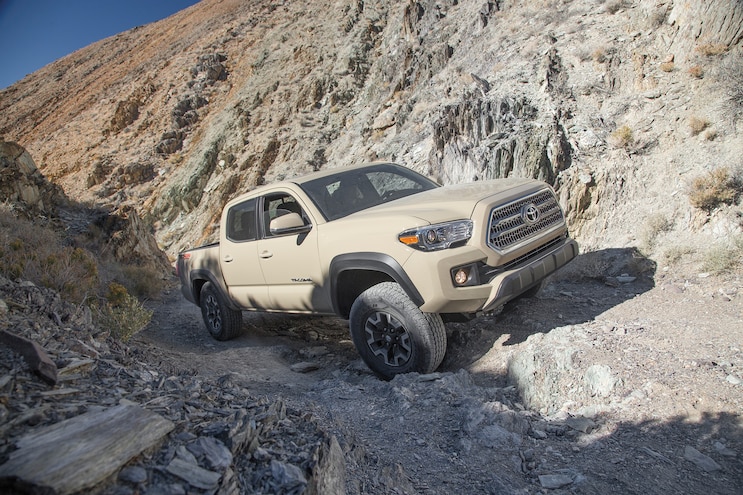 The first new Tacoma in more than 10 years, Toyota’s ’16 iteration of its midsize pickup is much improved over its predecessor. But luckily, all that refinement hasn’t come at the expense of off-road fun.
Just as you’d expect from the company that built its reputation on utility vehicles like the Land Cruiser and Pickup, the new Tacoma is chock-full of off-road goodies and features that made the Tacoma one of our favorite vehicles in the test for mud-slinging, sand-flinging fun. Chief among those features is Toyota’s Crawl Control off-road speed control, which allowed us to focus on wheel placement and steering, rather than throttle and brake application. By shifting into low-range four-wheel drive, we could set Crawl Control to keep us at speeds up to 5 mph, making climbing sand dunes and rocky trails a cinch. Not all of us loved relinquishing control, but there’s no denying it made off-road driving much less stressful. 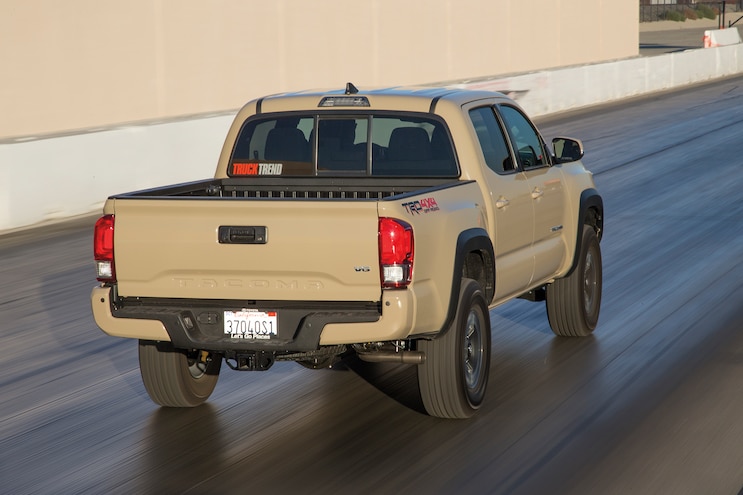 View Photo Gallery | 12 Photos
Photo 2/12   |   02 2016 Tayota Tacoma TRD Rear Three Quarter
Also helping the Tacoma’s case in the nasty stuff was Multi-terrain Select, a now-common feature that customized throttle and transmission response and traction control intervention to a variety of situations. Loose rock, sand, and mud were fairly easily dispatched by the system, and while we never got stuck, we’ve no doubt that Multi-terrain Select would help us get out.
However, no matter how hard we tried, we couldn’t completely disengage the truck’s traction control, making getting through deep sand tricky. In the Ram Rebel, simply matting the throttle was enough to thrash us through the dunes, but in the Tacoma, the traction control would cut engine power to the point that all forward momentum would cease. Not only did it suck the fun out of sand dunes, it also made getting bogged down a common occurrence. 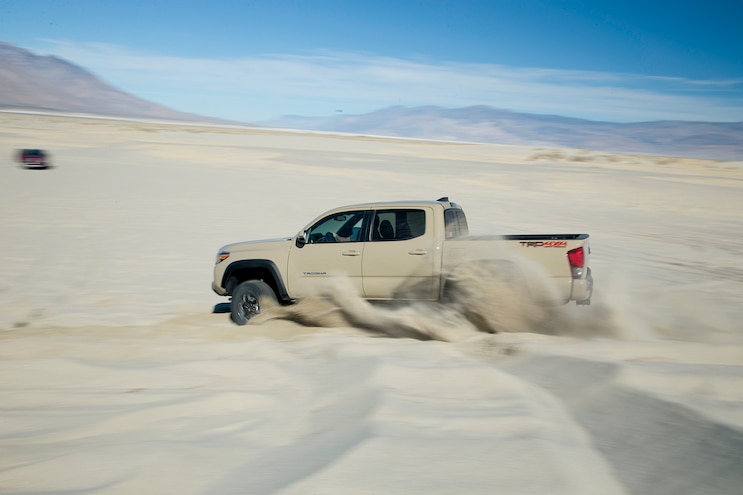 View Photo Gallery | 12 Photos
Photo 3/12   |   100 2016 Toyota Tacoma TRD Dune Blasting
On less strenuous off-road trails, all of us appreciated the Tacoma’s manageable size, impressive traction from the tires, and comfortable suspension tuning. While the Colorado’s firm suspension did wonders in terms of on-road composure, it made the truck head-tossingly uncomfortable off-road. The Tacoma had no such problem, thanks to the Bilstein shocks’ excellent tuning. Soft springs and squishy tires made the on-road ride very comfortable, although the truck has significant of body roll and brake dive. You’ll never confuse it for its Scion FR-S brother.
Featuring both port and direct injection, the new 3.5L “D-4S” V-6 makes a fair bit more power than last year’s port-injected 4.0L, and it feels it. Where the old Tacoma sometimes felt strained on the highway, the new one is much more tractable. While not as adept at towing as the torque-heavy Colorado and Canyon Duramax, it felt perfectly adequate with either a trailer or a bed full of payload. You’ll never confuse it for a dedicated tow pig, though, as it needed to be revved a fair bit to extract all the power. The 278 horses come online at a lofty 6,000 rpm, but at least the new six-speed automatic is smooth and relatively responsive. 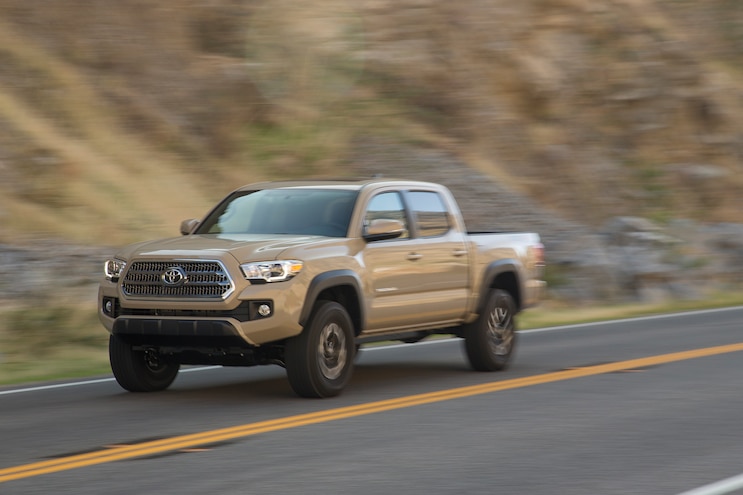 View Photo Gallery | 12 Photos
Photo 4/12   |   16 Toyota Tacoma TRD Rolling
You’ll have to squint hard to see the exterior differences between the ’16 Tacoma and its immediate predecessor. Chief among them is a bold, snouty front end and long hood that drew mostly negative reviews from our team’s eyes. On our Double Cab model, the hood looked almost as long as the bed, giving the Taco somewhat awkward proportions when viewed from the side. The big, plasticky taillights drew some fire as well for being overstyled. However, Toyota finally did away with the asymmetrical wheel arches, and as on all off-road Toyotas, the tire fitment and stance are just about perfect.
Inside, the ’16 Tacoma’s improvements over its predecessor are immediately evident. The interior’s design is modern and attractive, and the touchscreen infotainment system is finally a product of the current decade (if still a bit less user-friendly than GMC’s Intellilink). However, while most of the interior is improved, one key aspect actually got worse in the redesign. While the old Tacoma’s seats were butt-on-the-ground low, they at least had some support for your splayed-out legs. The new, higher front seats were uncomfortable, with almost no thigh support and no height adjustability. Even our resident Toyota fanatic couldn’t get comfortable in the driver seat. 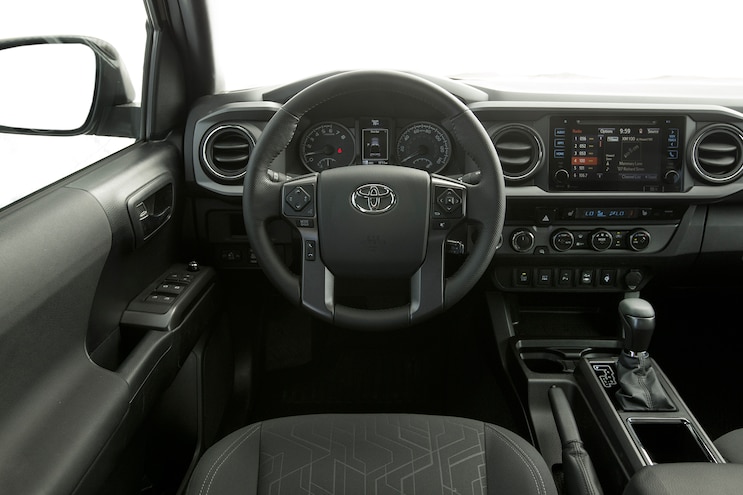 View Photo Gallery | 12 Photos
Photo 5/12   |   48 2016 Toyota Tacoma TRD Drivers Seat
But for those with active lifestyles, the Toyota’s fun-to-drive attitude, off-road prowess, guaranteed aftermarket support, and much-improved noise, vibration, and harshness could make it an irresistible alternative to the GMC Canyon and Chevrolet Colorado. We certainly enjoyed it in spite of its few shortcomings.
By Brett T. Evans
WE LIKE: Most fun truck in the dirt. Much-improved interior and electronics. Segment-exclusive off-road features. Better on-road than ever.
WE DON’T LIKE: Awkward exterior proportions. Not all of us could find a comfortable driving position. Annoying traction-control settings.
LEAD IMAGE: With an all-new powertrain, sophisticated off-road electronics, and a more comfortable highway ride, the ’16 Tacoma upholds Toyota’s reputation for good midsize pickups, especially where the pavement ends. 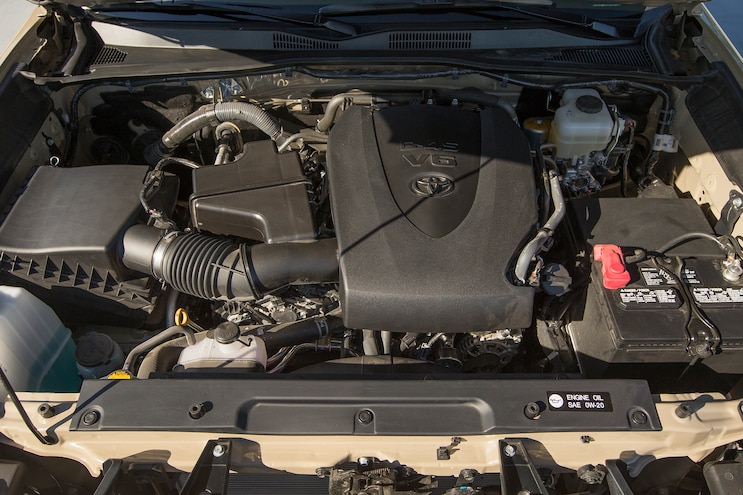