From Workhorse to Powerhouse 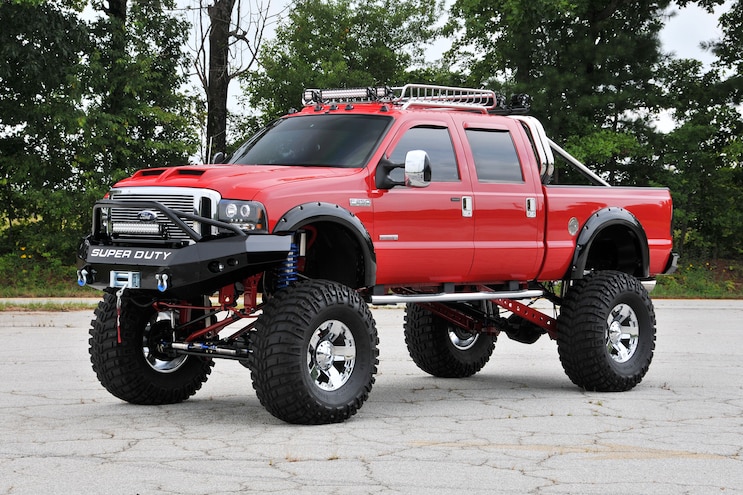 If you’re a regular reader, you know our trucks are always works in progress. While they might start out with just a single functional purpose, personalizing them to accomplish different roles has always been part of the fun. Stock trucks morph into work trucks that get the job done and pay the bills. Others become show trucks that need the pickup bed to haul the weekend load of trophies.
Matt Kelly knows exactly how the transformation works. He lives in Belton, South Carolina, and is in the gas pipeline construction business, covering the eastern seaboard from Pennsylvania to Louisiana. He owns this ’06 Ford F-250 Lariat Crew Cab, which he purchased new as a daily driven work truck. The functional Ford was the ultimate business tool for several years, with performance mods on the 6.0L diesel adding to the fun, like the Edge Platinum Program chip and a polished MBRP 4-inch Cool Duals exhaust system. After driving and enjoying the truck for five years, it was time to replace it with something new. Instead of banishing the Ford to the used car lot, Matt gave the truck a second chance and created a whole new level of enjoyment from his favorite ride. 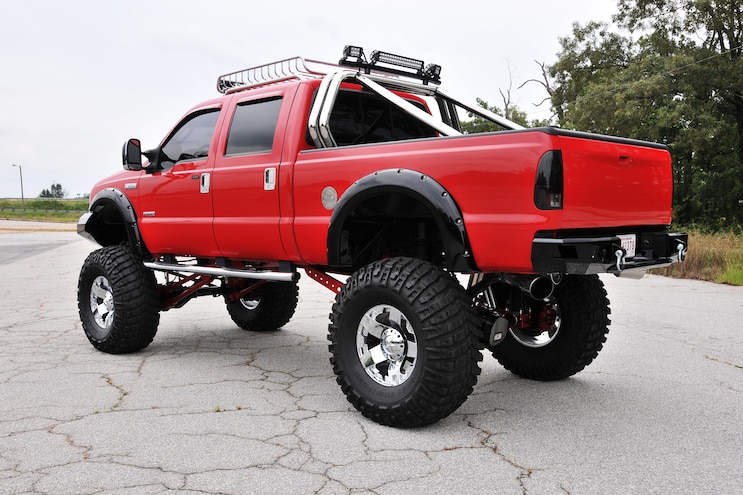 View Photo Gallery | 50 Photos
Photo 2/50   |   2006 Ford F 250 Stereo Truck 008
It started around 2011, with a few simple changes that began with a moderate lift—a move that launched the rejuvenation of his favorite old Ford. As a result of good info in magazines like 8-Lug and his “What if we did this?” attitude, Matt began a series of changes that radically transformed the truck, producing a lifted show winner with a twist. Big trucks look their best with a little extra altitude, so the first step was to redo the lift with a Fabtech 10-inch Dirt Logic kit. Appropriate for its new show truck persona, the Ford uses powdercoated brackets to hold the reservoir shocks and coilovers on the front and the four polished gas shocks that control the rear axle. Twin Dirt Logic reservoir shocks stabilize the steering while the 60-inch ladder bars control the rear. The stock Ford Super Duty axles run front and rear 3.73 gears and are fitted with Mag-Hytec differential covers. A third cover was fitted to the oil pan for extra fluid capacity and matching good looks. The aggressive 46x19.5R20LT Mickey Thompson Baja Claw tires roll on 20x12 KMC Rockstar XD Series wheels.
Once this strictly on-road cruiser had rock-climbing potential, Matt began a series of exterior touches that included front and rear Fab Fours bumpers painted black to match the Bushwacker fender flares. The unique roof rack was split down the middle, widened to fit the truck, then re-welded and chromed. Anzo headlights, Recon LED taillights, and Anzo off-road LED lightbars were added for nighttime fun. The front and rear of the roof hold 24-inch-long units encapsulated by pairs of smaller 6-inch units. There’s an additional 24-inch Anzo lightbar in the grille. The truck boasts a custom Keystone Restyling hood and, just in case, there’s a 12,000-pound Warn winch up front and a Go Rhino! double stainless rollbar in the bed. The crew at Truck Toyz in Anderson, South Carolina, made the changes. 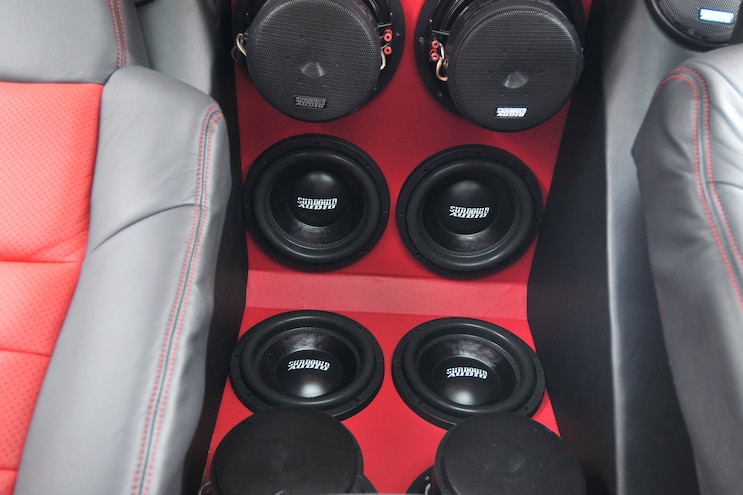 View Photo Gallery | 50 Photos
Photo 3/50   |   2006 Ford F 250 Stereo Truck 041
It’s inside, however, where the real fun begins. Matt grew up in the ’90s, when the car audio craze hit, and he’s always been a fan of big systems. With plenty of room in the F-250, the first question posed for the elaborate new system was once again, “What if?” Jonathan Kurz had the answer. Known as the Tin Man and owner of Tin Man’s Custom Enclosures and Car Audio (also in Anderson), Jonathan was chosen to create an appropriately huge, ’90s-style stereo upgrade inside the Ford. Matt’s guidance was simple. He wanted hard-hitting bass with eight 10-inch subwoofers and a box in the rear to hold them.
The first thing you notice about the spacious Lariat Crew Cab is its transformation into an intimate two-seater. The original Lariat leather package was replaced with black-and-red perforated leather, a custom headliner, and black-and-red carbon-fiber accents on the dash. Next, it’s hard to miss the elaborate electronics package that makes this truck a rolling sound studio. Jonathan began the makeover with a fiberglass subwoofer enclosure that takes over the entire rear of the cab. It holds the requested eight Sundown SA-10 subs, but if some are good, more has to be better. Augmenting the initial bass collection, Jonathan used the new center console to hold six additional Sundown 8-inch mid bass speakers, just in case the first eight weren’t enough. Custom door pods round out the package, adding four 6.5-inch component sets front and rear that fill in the mids and highs. The Kenwood double-DIN head unit in the dash controls the multiple Sundown amps, which take up both rear door openings. Each of the four SA-2 1500D amps power two 10-inch subs, a single 1200D powers the six mid bass speakers, and a pair of 2500.4 four-channel versions energizes the four component sets. The package puts out a staggering 7,450 watts—almost enough to blow the Ford’s windshield onto the hood! Finishing touches included covering the cab internals with Dynamat and adding three 2400 Kinetic batteries and dual AC Delco alternators to ensure adequate power for the mega system. While Matt certainly enjoys his loud-and-clear setup, future plans call for even more fun, with a new stereo designed around four bucket seats, a new console that flows from front to rear, and new door panels to hold the redesigned stereo components. 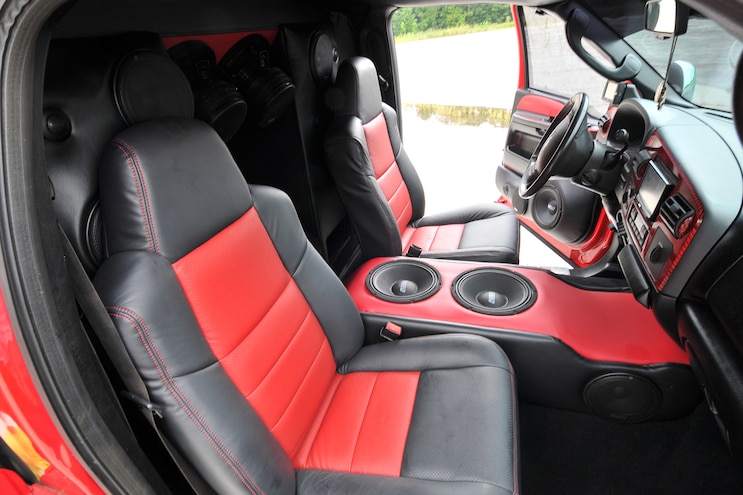 View Photo Gallery | 50 Photos
Photo 4/50   |   2006 Ford F 250 Stereo Truck 030
While this truck may never again see pipeline duty, Matt’s “What if” approach has given new life to his old work truck, ensuring the future of his rolling sound studio looks (and sounds!) bright. Special thanks to the crew from Truck Toyz and the Tin Man for their talent and imagination. 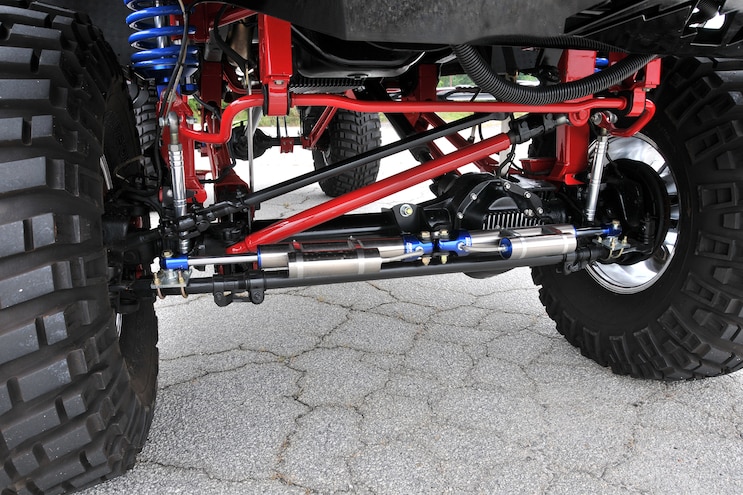