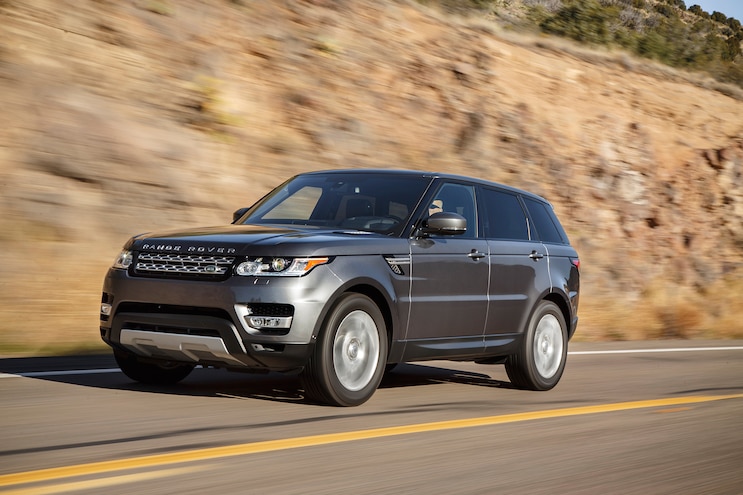 We’re big fans of Land Rover’s two Range Rover models. After all, the duo is easy to love for their iconic out-of-Africa exterior looks, sumptuous interiors, great on-road manners, and the genetics that endow them with some of the world’s top four-wheel-drive capability. And now comes diesel! So, what does that mean? Low-end torque? Higher towing capability? Better fuel economy overall, with a diesel cost savings at the pump? All of the above. Since its debut in 1970, the four-wheel-drive Range Rover fullsize sport utility vehicle has been lauded for its luxurious trappings, as well as its extreme off-road capabilities. Additionally, the highly awarded model has been the launch-pad for numerous class-leading and world-first technologies. It was joined by the midsized Range Rover Sport in ’05, a shorter stablemate skewed towards more sports-minded, on-road motoring, and an SVR (Special Vehicle Racing) edition came to market in ’15 with even more boosted performance and a top speed of 162 mph. Both models have bespoke, special-edition versions. 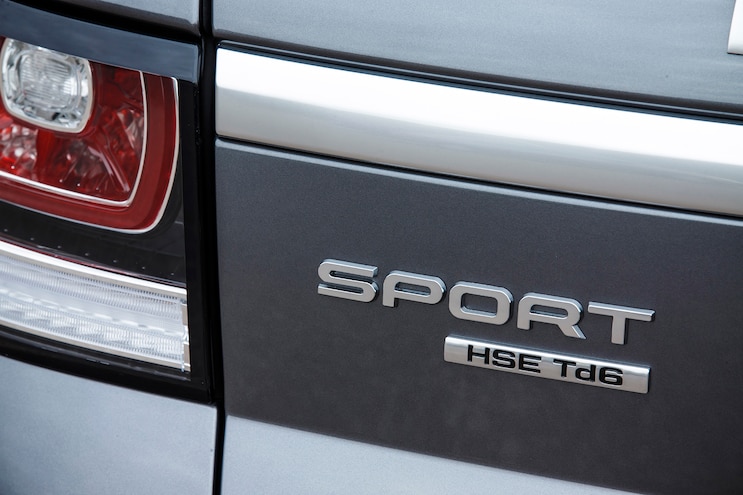 View Photo Gallery | 118 Photos
Photo 2/118   |   060 2016 Range Rover Sport Td6 Diesel
Now in its fourth generation, Range Rover adds Land Rover’s Td6 to its powertrain options, with the promise of exceptional quietness, as well as improved efficiency and performance (the Sport is a second-generation model). Land Rover says this six-cylinder engine has nearly as much torque as a gasoline V-8 and both models will boast a 32 percent improvement in economy over their gasoline-powered supercharged V-6 equivalents. EPA estimated economy figures come in at 22 mpg city, 29 mpg highway and 25 mpg combined, with an expected cost savings of some $450 to $800 over V-8 versions, depending on usage. The diesel powertrain comes at a premium of only $1,500. The British marque has also updated the ’16 models with new all-terrain technologies, a novel hands-free opening of the rear liftgate, plus updated user interfaces and new apps.
Land Rover says that ’16 Land Rover Range Rover Diesel and ’16 Land Rover Range Rover Sport Diesel are the manufacturer’s first-ever diesel offerings in North America and that the global outlook predicts that some 50 percent of all autos world-wide will be diesel models upcoming, although the market in the U.S. currently represents only 4.6 percent of sales. Since 2009, however, there has been a growing uptick of diesel buyers. Starting price for the entry-level Range Rover Sport Td6 is $64,950 and $86,450 for the Range Rover Td6 (plus $995 destination/handling). The Range Rover models compete with the Mercedes G350, the Audi Q7, and the Lexus LX570, among others. 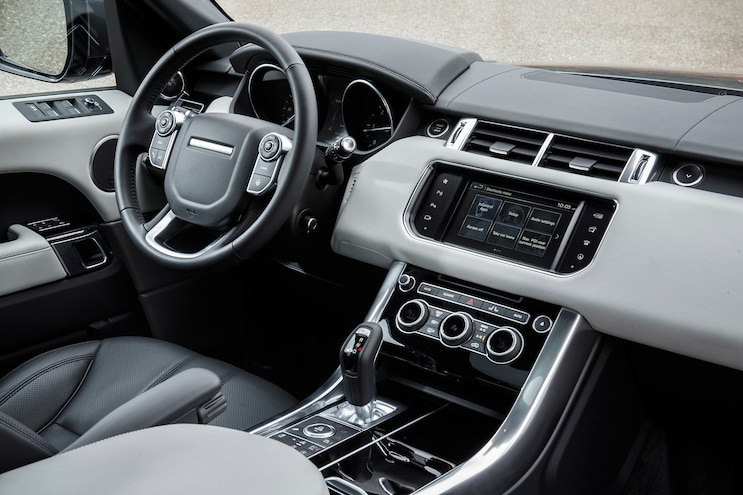 View Photo Gallery | 118 Photos
Photo 3/118   |   072 2016 Range Rover Sport Td6 Diesel
Outside and in, the refined Range Rover models remain the same with uber-handsome looks, indulgent premium materials, and abundant technology. The interior is sophisticated and modern, incorporating distinctive Range Rover design, wrapping passengers in sumptuous leather, lux-level wood, and satin chrome trims. New are InControl apps that are available as a stand-alone option or packaged with the Meridian upgrade stereo. The new hands-free tailgate opens with a foot gesture swiped beneath the rear quarter panel.
Motivating the new models is Land Rover's 3.0L turbocharged 60-degree V-6 diesel that boasts 254 hp and 440 lb-ft of torque and is mated to an eight-speed electronically controlled automatic transmission. Because peak torque arrives at 1,750 rpm (the gasoline V-6 produces 332 lb-ft at 3,500 rpm), Land Rover says the diesel powertrain will be particularly well-suited to towing heavy loads and off-roading where reaching maximum torque at a lower gear is beneficial. The maximum towing capacity is 7,716 pounds. 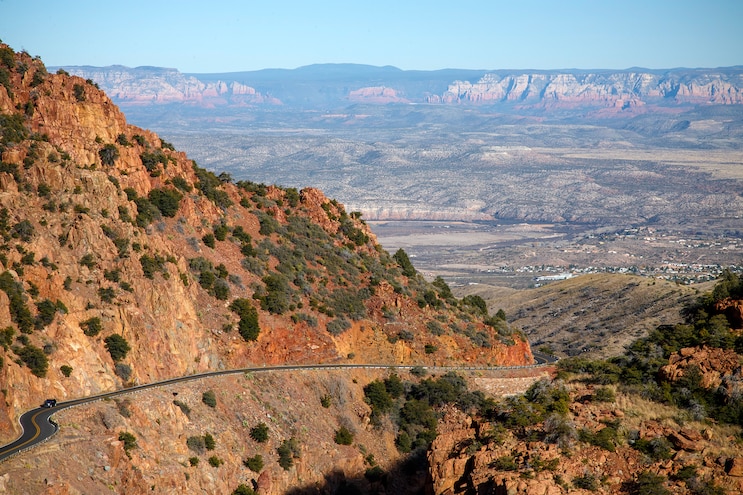 View Photo Gallery | 118 Photos
Photo 4/118   |   040 2016 Range Rover Sport Td6 Diesel
Our recent drive with the two models took place in Arizona. We left the bustling cityscape of Phoenix and headed north to centrally located Verde Valley, motoring in the ’16 Range Rover Sport along paved roads, with a bead on the Schnebly Hill Road off-road track near Sedona. Most notable from the start was the quietness of the diesel powerplant, which gives a slight hint of its diesel motivation only when blipping the right pedal or using heavy throttle pressure. Land Rover attributes this to its compacted graphite iron engine block that reduces overall vibration, new isolating engine mounts, and an acoustic-laminated windshield that cossets occupants from outside noise. After we engaged the best off-road settings for the varied terrain, the on-road sprinter settled in to an amiable amble across the picturesque dirt trail, with hill descent control and rockcrawling mode managing our speed for smoothness and comfort when needed for tougher patches of the trail.
On Day Two, we drove the larger and more rugged Range Rover both on the road and on the more rigorous “Greasy Spoon,” a rock- and boulder-littered four-wheel-drive track that allowed Land Rover to showcase its newest off-road technology. Both models have high and low range gear sets and ride on a full-time intelligent all-wheel-drive with Terrain Response 2 technology that allows drivers to select one of several modes to optimize performance on a variety of different surfaces. New for ’16 is the All Terrain Progress Control (ATPC) system that is able to switch automatically between the five settings—General, Grass/Gravel/Snow, Mud/Ruts, Sand, and Rock Crawl—to ensure the vehicle is always in the optimum mode. It allows the driver to set the speed via the cruise control buttons but only works at low speeds. Like the previous Terrain Response system, each setting optimizes drivability and traction by adapting the responses of the engine, transmission, differentials, and chassis systems to match the demands of the terrain. Standard air suspension lifts or lowers the vehicle more than 4 inches at the push of a button. Other standard driving technologies include hill descent control, dynamic stability control, electronic traction control, cornering brake control, electronic brake-force distribution, and emergency brake assist.
Land Rover expects that its new diesel engine will become a popular choice for Range Rover buyers and predicts that 15 to 20 percent will pick the Td6 engine. 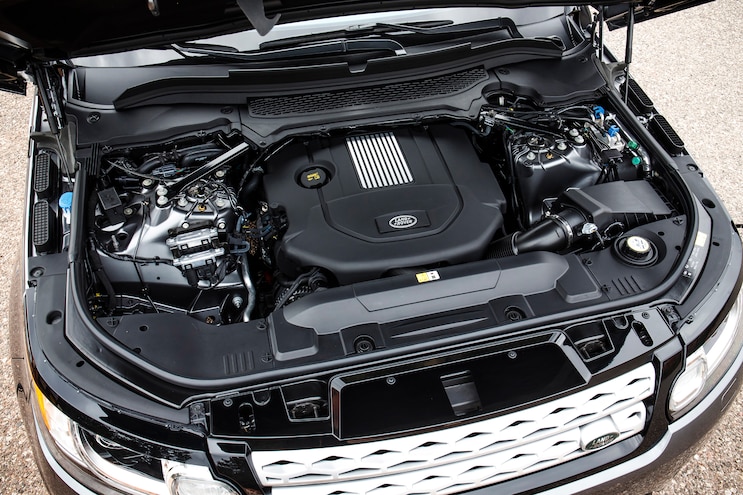