This 1956 Duramax DeSoto is built for speed 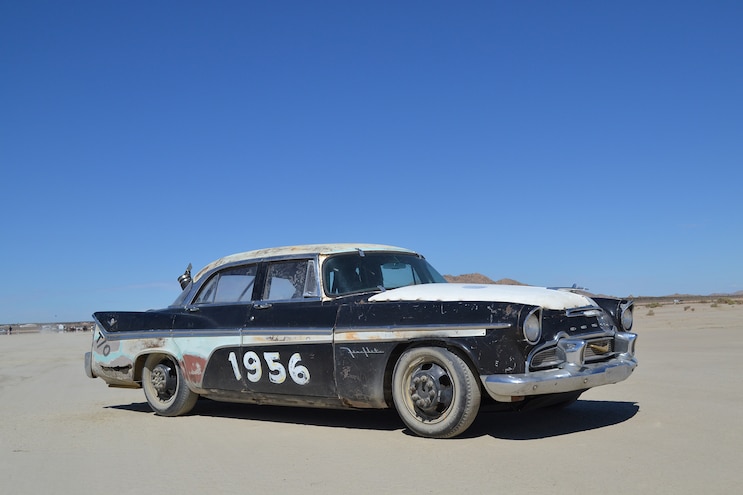 The recipe was simple: Take one part old car and combine it with another part 6.6L Duramax diesel engine, then go land-speed record racing with the finished product. Little did owner Leon Ekery know at the start of this endeavor that his simple idea would wind up taking four long years to execute.
“I bought an ’03 Chevrolet Silverado 2500HD with the idea of building a Duramax-powered car,” Leon says. As the owner of a salvage yard, Leon has plenty of connections to vintage iron, so when a ’56 DeSoto Fireflite came up for grabs, he knew it was a perfect match for the diesel engine. 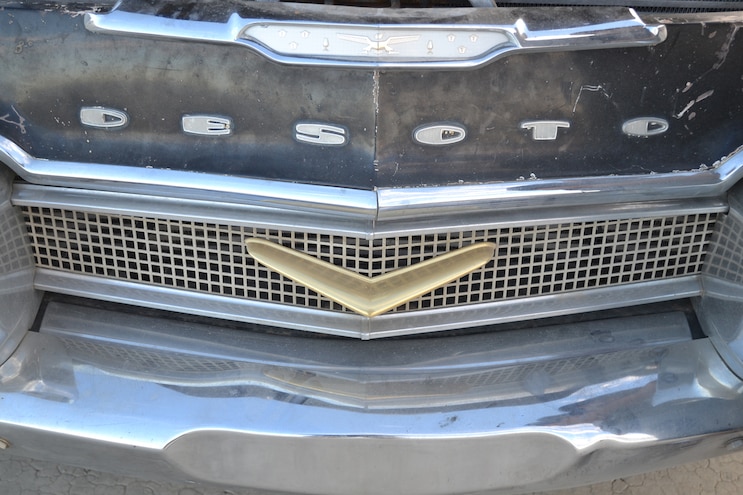 View Photo Gallery | 21 Photos
Photo 2/21   |   016 DSLP 160600 GM Desotomaxx Grille
With two halves of the grand scheme already in his possession, Leon went about turning the basket case DeSoto into a diesel-powered speeding bullet. While the original idea was to simply swap everything into the DeSoto chassis and call it done, that plan was quickly scrapped once Leon took a good look at the 60-year-old car’s deteriorated front suspension. As Plan B, the truck’s entire front subframe was retained, and a completely new, round-tube back half of the chassis was created to support the DeSoto body.
The suspension is equally trick. In the rear is a four-link setup that uses heavy-duty Hyperco springs and QA1 shocks. The front also needed to be much lower than stock, so Leon sourced drop spindles from McGaughy’s Suspension Parts that, along with torsion keys, bring the nose down by 2 to 3 inches. 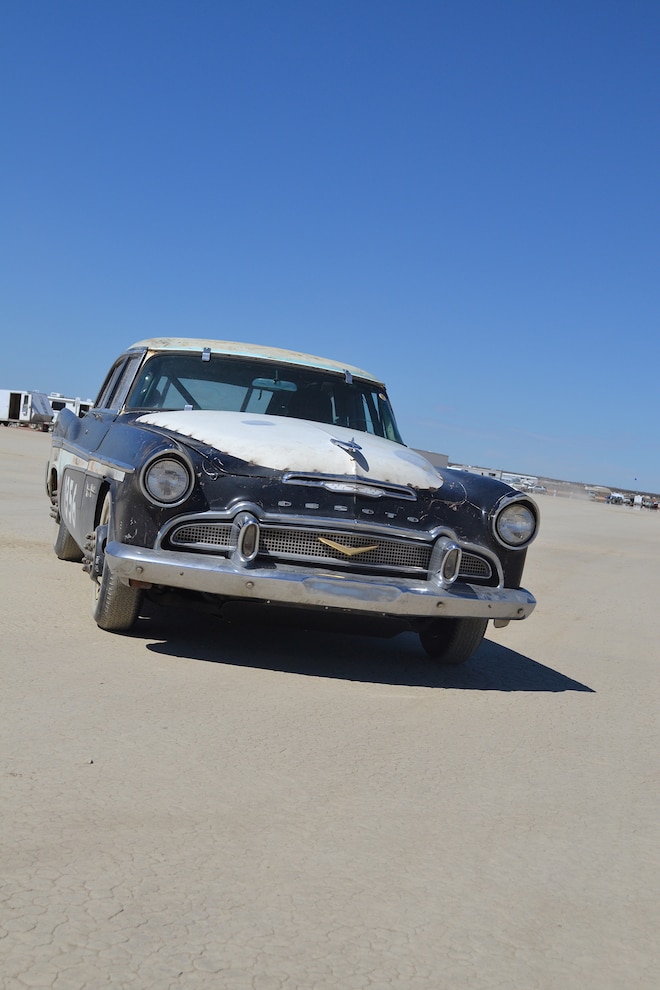 View Photo Gallery | 21 Photos
Photo 3/21   |   019 DSLP 160600 GM Desotomaxx Front
Perhaps the most radical piece on the car is the rearend. For land-speed racing, a very tall final gear ratio is needed for achieving 150- to 200-mph speeds. Since the correct ring-and-pinion set wasn't available for the factory AAM 1150 rearend housing, Leon was able to convince Currie Enterprises to build a custom 9-inch centersection for the 1150, completing it with a Moser Engineering Wavetrac differential and 35-spline axles, and 2.47 gears from Yukon Gear & Axle.
The DeSoto’s mostly stock, 203,000-mile Duramax does have a hot tune from Adrenaline Truck Performance. The four-wheel-drive Allison 1000 five-speed automatic transmission is also stock internally and has been fitted with a Gear Vendors overdrive unit. The transmission/overdrive package gives the DeSoto enough gearing to reach 250 mph! With its mild powerplant, the DeSotoMaxx hit 141 mph on a 1.3-mile dirt course in El Mirage, California. The team also plans to head to the Bonneville Salt Flats with a 64mm turbo, water injection, and a built transmission, hoping to break the 200-mph mark. In the wild world of land-speed racing, Leon's diesel-powered DeSoto is definitely one of the wildest cars out there—and we look forward to hearing more about its progress. 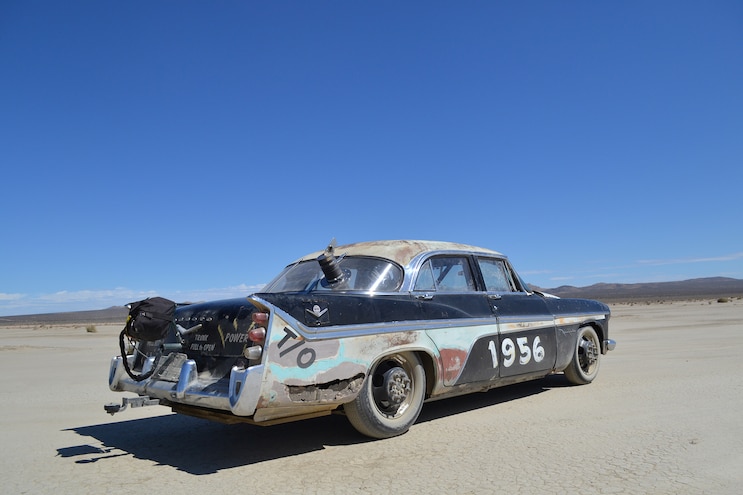 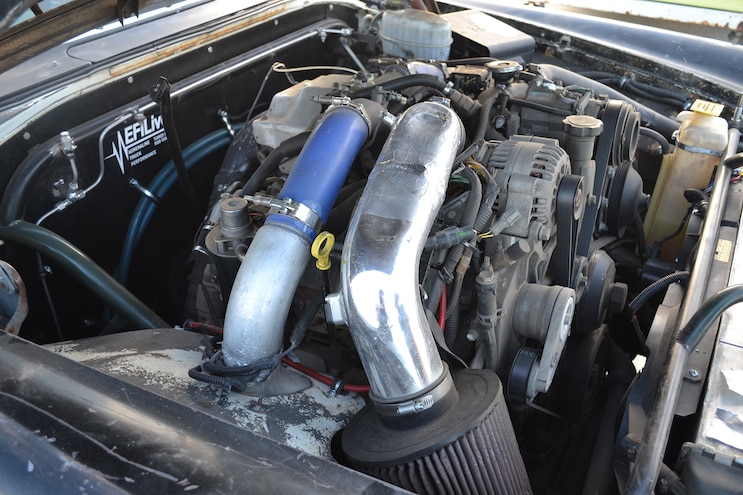 View Photo Gallery | 21 Photos
Photo 5/21   |   002 DSLP 160600 GM Desotomaxx Duramax Engine
A ’56 DeSoto is one of few vehicles that has an engine bay large enough for a diesel swap with room to spare. With a smoothed firewall by Shaun Petta at Function Fab, the Adrenaline Truck Performance–tuned (400 hp, 900 lb-ft), 6.6L Duramax engine fits with ease. 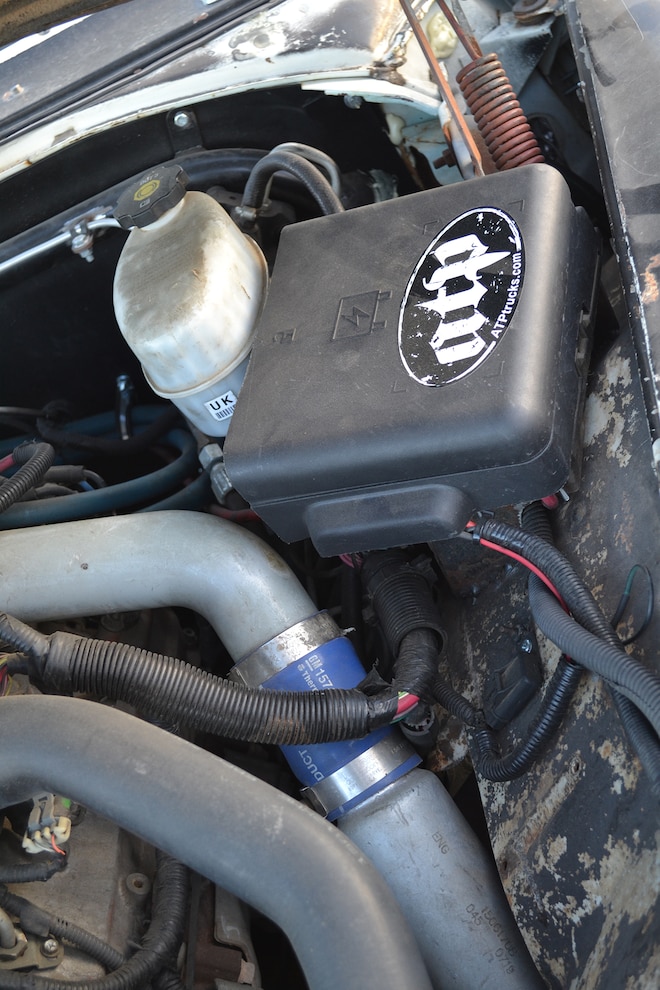 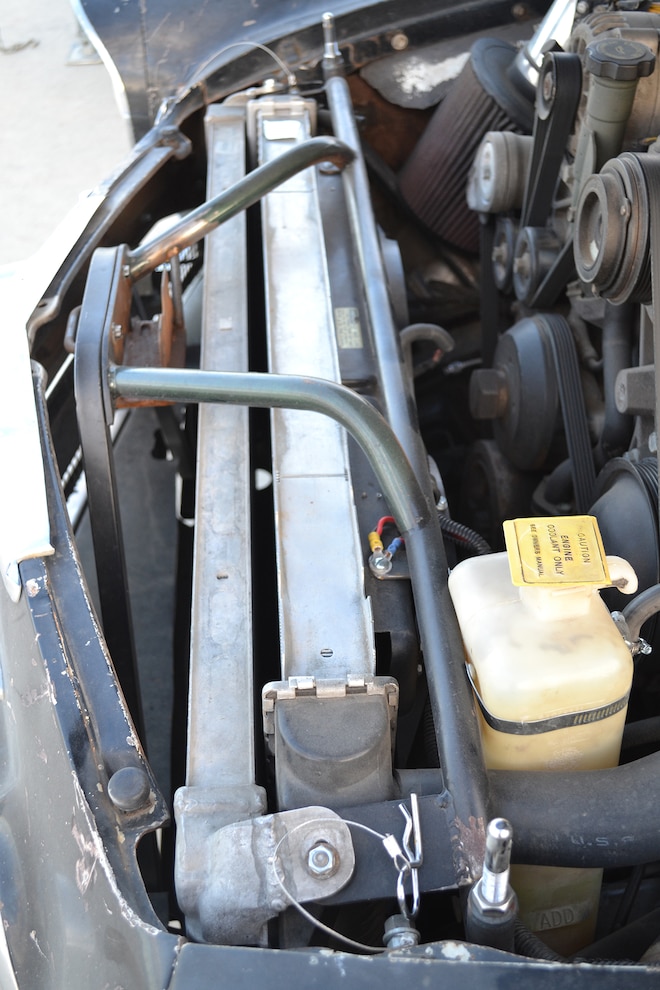 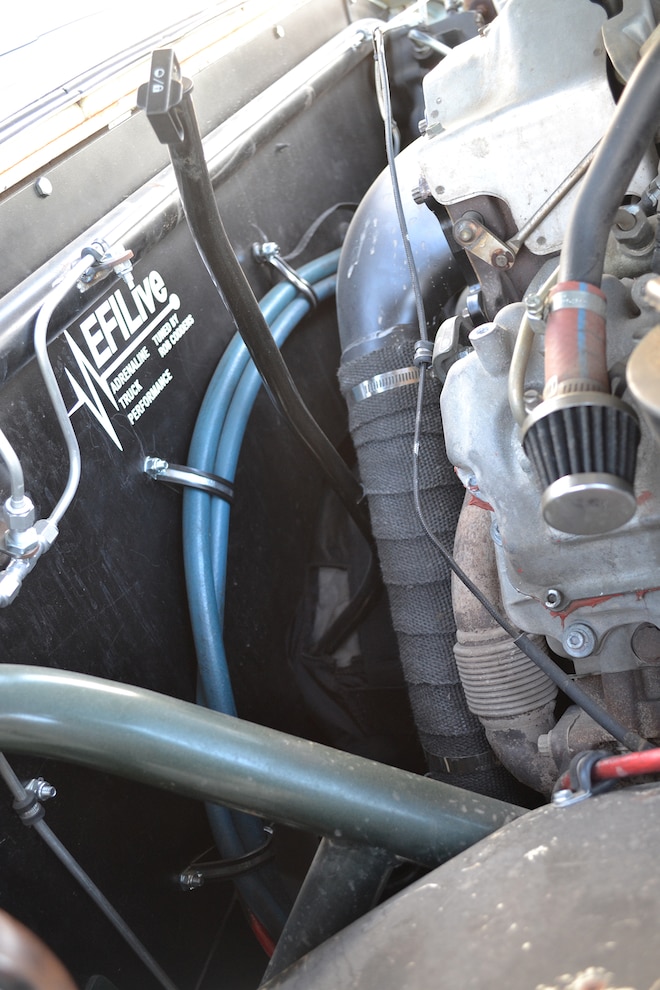 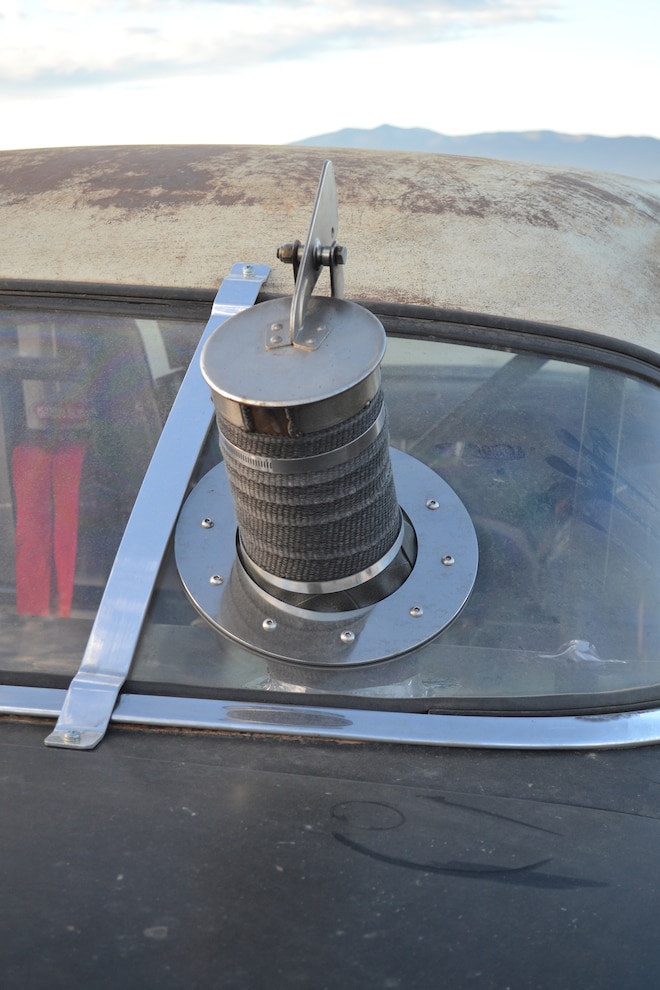 View Photo Gallery | 21 Photos
Photo 9/21   |   006 DSLP 160600 GM Desotomaxx Exhaust
The rear window must be Lexan per SCTA rules, which creates a convenient place for the exhaust’s 5-inch flapper valve to exit the car. 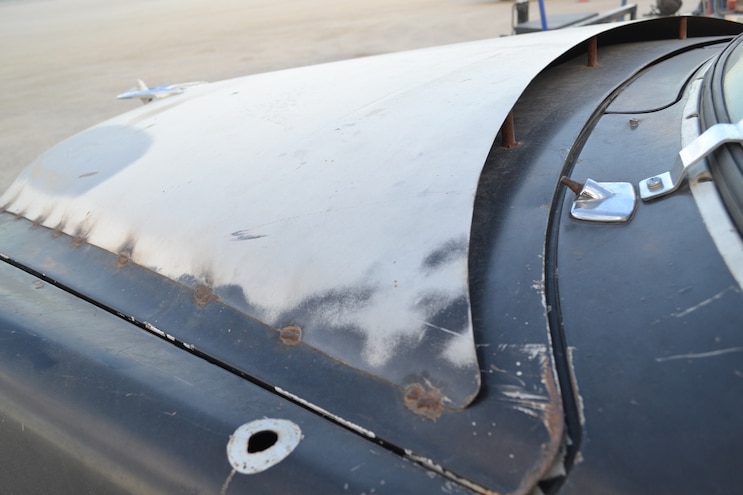 View Photo Gallery | 21 Photos
Photo 10/21   |   007 DSLP 160600 GM Desotomaxx Rat Cowl Hood
With an engine as tall as a Duramax is, hood clearance can be an issue. Cowl hoods for ’56 DeSotos aren’t top-selling items on eBay, so Leon’s team whipped up a custom piece that clears the turbocharged diesel. 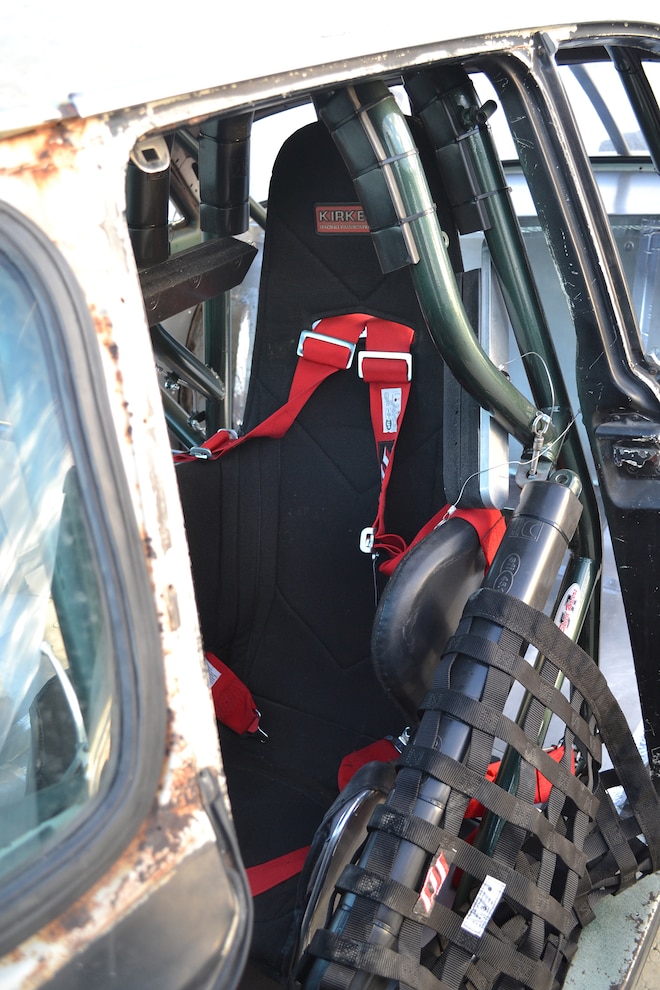 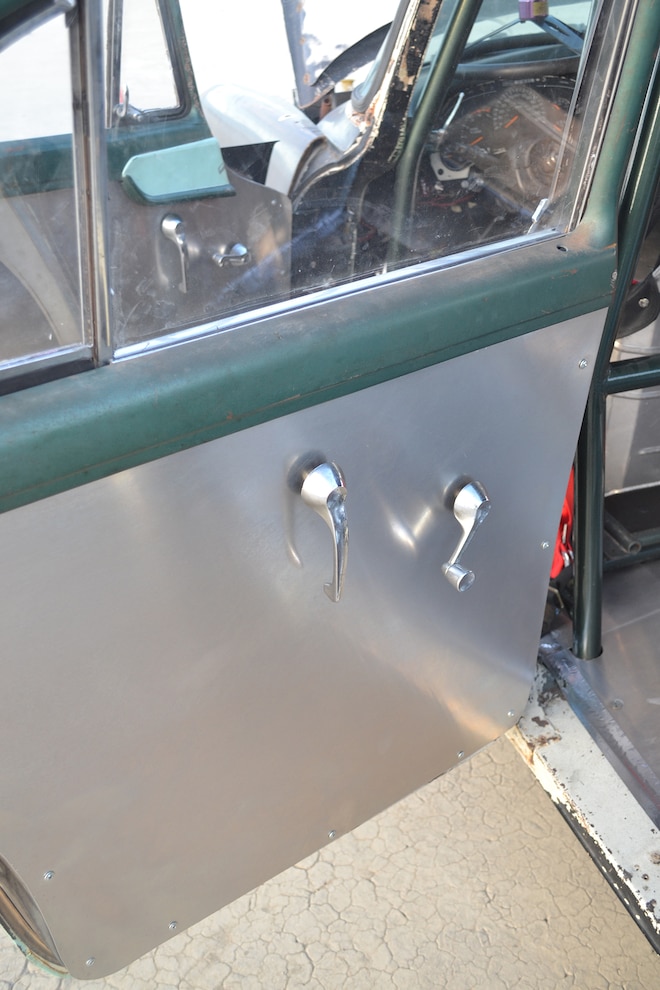 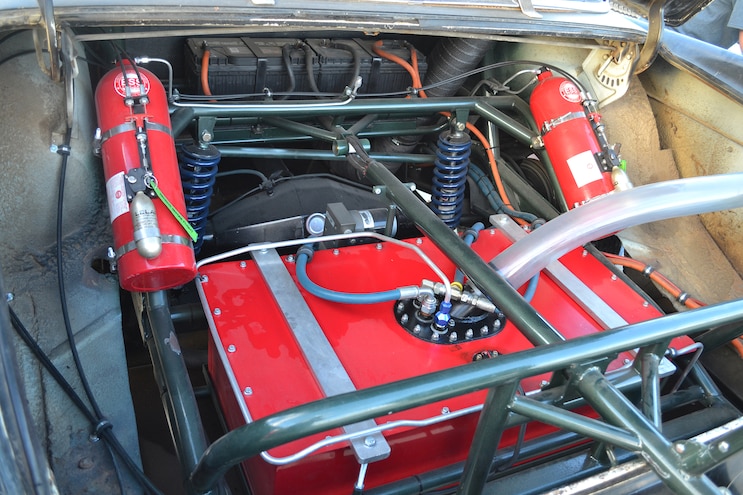 View Photo Gallery | 21 Photos
Photo 13/21   |   010 DSLP 160600 GM Desotomaxx Rear Back Half
All you need is one look at the rear of the car to understand why completing the project took as long as it did. The all-tubular back half reminds us of a NASCAR stock car and is home to a custom, hybrid 9-inch rearend with 2.47 gears, a 1,000-pound weight plate, 25-gallon fuel cell, and advanced fire-suppression system. The rear suspension is a four-link design that incorporates QA1 shocks and Hyperco coilover springs. 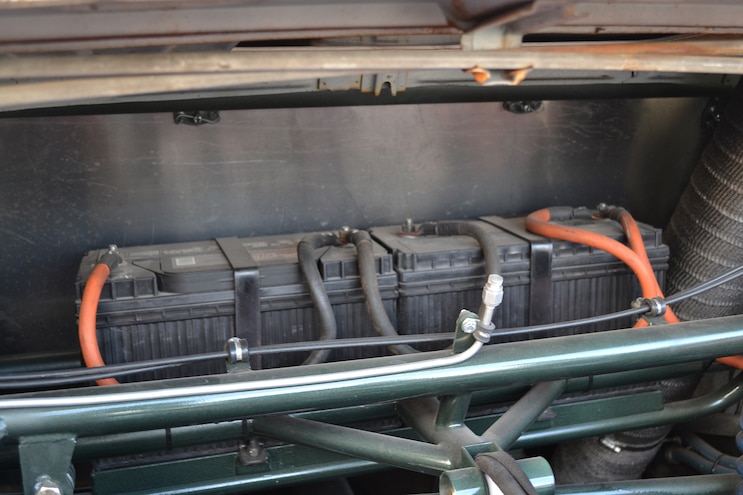 View Photo Gallery | 21 Photos
Photo 14/21   |   011 DSLP 160600 GM Desotomaxx Batteries
With traction at places like the dry lake beds of El Mirage (California) and Bonneville Salt Flats in Utah being critically important, heavy items such as twin batteries are positioned at the back of the DeSoto. This gives the car an interesting 46 percent (front), 54 percent (rear) weight bias, which is the opposite of most diesels. View Photo Gallery | 21 Photos
Photo 15/21   |   012 DSLP 160600 GM Desotomaxx Wheels And Tires
Four 7-inch-wide, 29-inch-tall Dunlop racing tires from Cowboy Tire Service are some of the only tires that can handle the car's weight and speed. They’re mounted on factory GM dualie wheels and tuck neatly inside the DeSoto body. 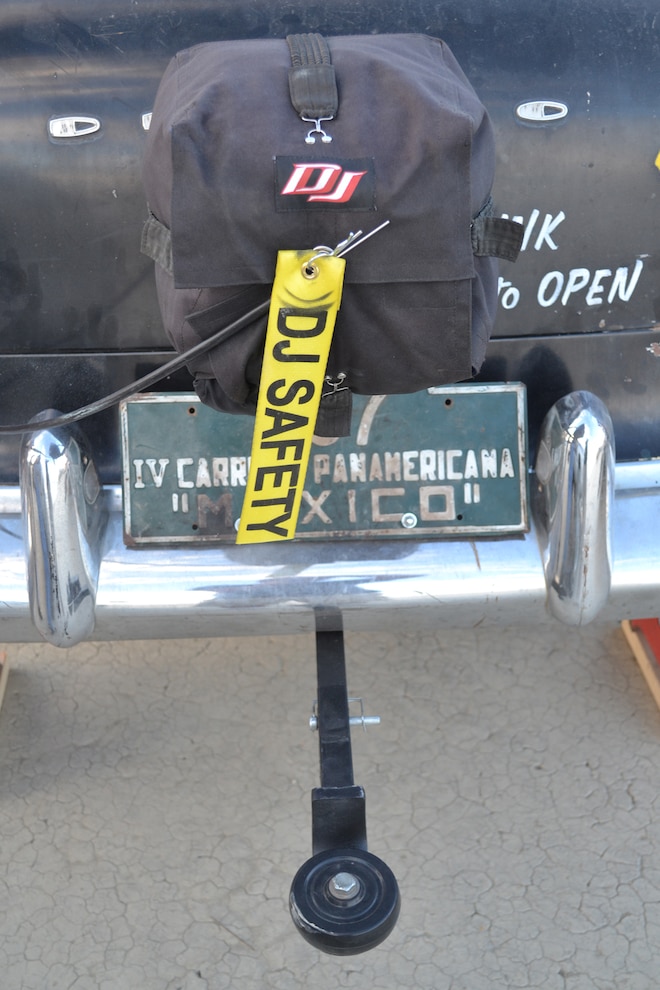 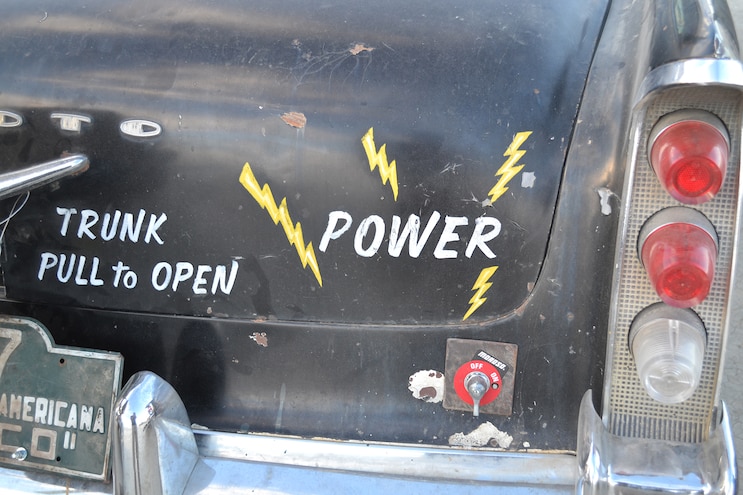 View Photo Gallery | 21 Photos
Photo 17/21   |   014 DSLP 160600 GM Desotomaxx Power
An outside electrical shutoff switch (for both the battery and the alternator) is another safety item. The switch can shut the engine off in situations when the driver is incapacitated. 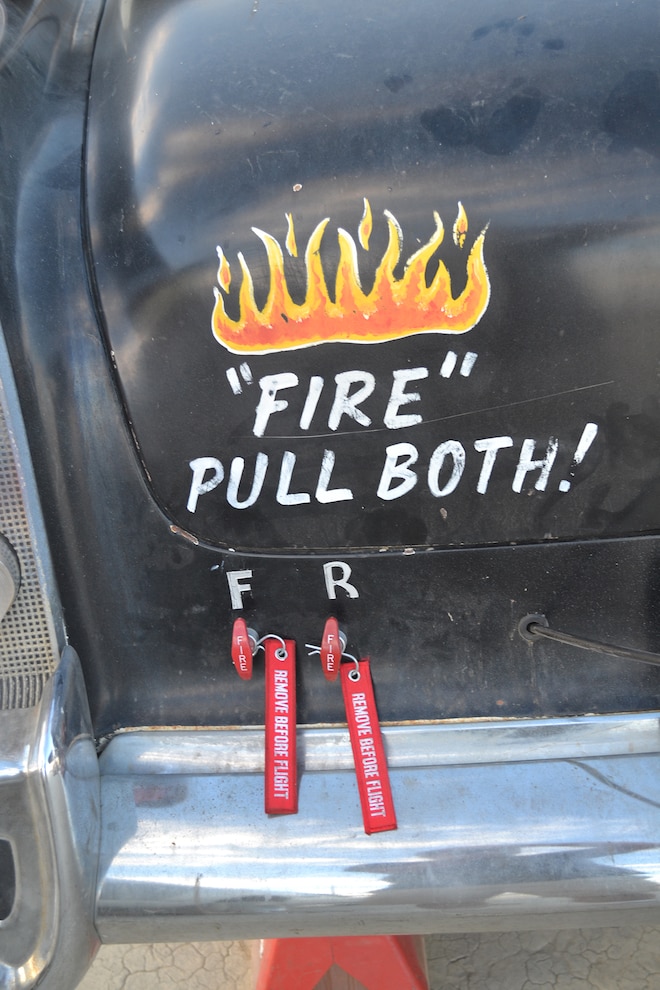