The Forefather of all Cummins Engines Returns Home 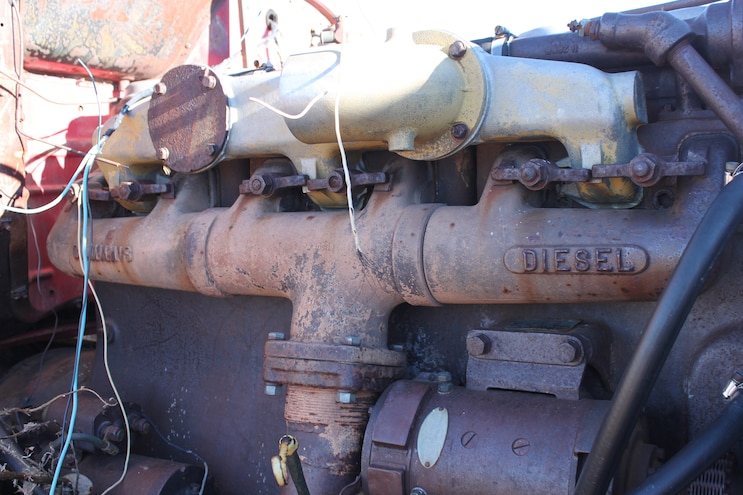 Its 11:00 a.m. on a Tuesday when we turn off highway 20—a lonely stretch of two-lane road connecting parts of South Dakota with Montana—and pass through the gates proudly displaying several “No Trespassing” signs.
Up and over a hill, we follow the remnants of a road now covered by 3-foot high prairie grass. We pass an old shuttered home that is somehow still standing and old vehicles in various states of decomposition until we reach the top of another hill. There, in the back of an impromptu junkyard lays our prize. It is the forefather of all current Cummins engines, and its appeal prompted the engine maker to send their historian nearly 1,200 miles with a truck and a flatbed to retrieve it.
The 1939 Cummins engine sits like a diamond in the worse-for-the-wear International Harvester truck. It looks so large and imposing to the naked eye it simply dominates the ’50s truck. With its straight six-cylinder design and girth, the engine is more reminiscent of a small locomotive engine than today’s modern Cummins engines. Yet, there it sits, and embossed on the side is the “Cummins” brand name blended into iron block. 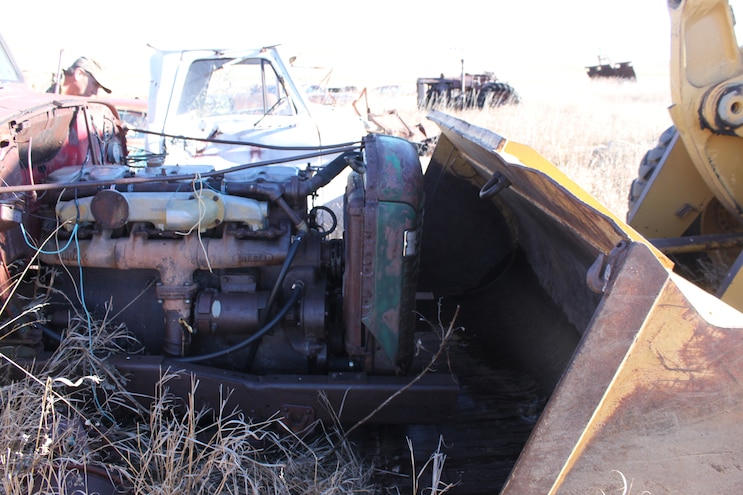 View Photo Gallery | 32 Photos
Photo 2/32   |   001 1939 Cummins International Field Find
For more than 40 years, the old Cummins engine has sat out in the open South Dakota landscape weathering the seasons. It has held up well to the constant barrage of snow, sun, and rain Mother Nature has sent at it. In fact, standing next to this behemoth, one wonders if with just a little oil, fuel, and a battery, maybe it would turn over once again. Imagining an engine of this size, scale, and history humming along again brings a boyhood excitement to the operation. And what an operation we are conducting.
Today is the day we are to raise the old Cummins from its prairie-grass prison and bring it back home to Columbus, Indiana, where it was first built. The big job requires an equally large Caterpillar wheel loader equipped with a wide bucket and two men. One is Sion Hanson, whose family has owned the property we are on for generations. The other is Bruce Watson, who recently retired as the Cummins Historical Asset Curator. Together with gold chains, they work to secure the truck to the Cat’s large bucket.
With a mighty tug, the truck rises up from its home, and the mud rut that remains seems permanently imprinted on the soil. As it rises, the back end emerges last, and it seems like the truck will slide backwards off the bucket. And just when it seems all is lost, the bucket is turned and the front of the truck nestles into the bucket with its rear pointing nearly into the sky. 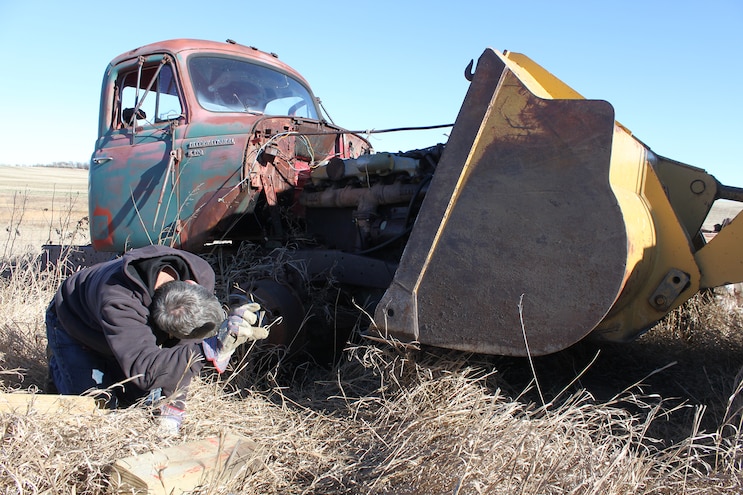 View Photo Gallery | 32 Photos
Photo 3/32   |   005 1939 Cummins International Field Find
A quick trip to the flatbed and the truck is carefully lowered onto the wooden deck. It’s quick work now as wood logs are inserted to level the truck, and tie straps fasten it down. After years of sitting on top of a hill with only two houses visible in the distance, the truck is raised and transplanted in less than a half an hour. It now will begin the two-day haul back to its home.
How Did Cummins Find The Old Engine? 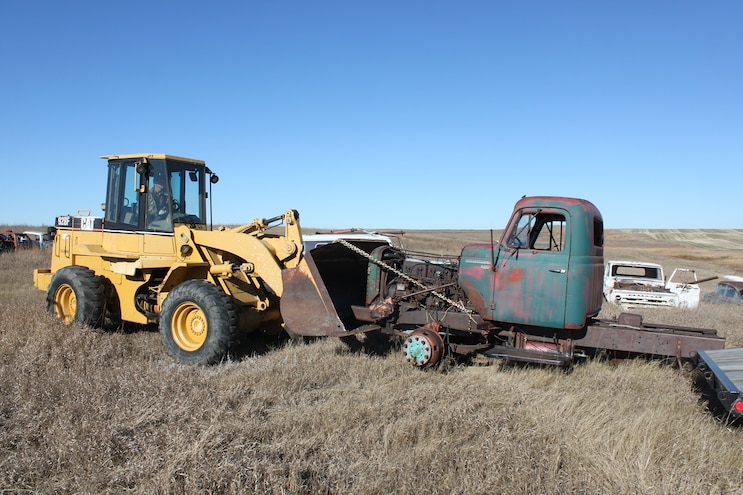 View Photo Gallery | 32 Photos
Photo 4/32   |   012 1939 Cummins International Field Find
One of the many interesting aspects of this story includes the question: how did Cummins find out about this engine?
Last year, Watson says Cummins received a message from Owen Hanson about the old International truck sitting in the field with an even older Cummins engine. Hanson says the last Cummins tech to work on the truck in 1970 called it the oldest engine he had ever seen. With such an old engine, Hanson thought Cummins might want to take a look at it.
“My cousin wants to dig a hole and bury it,” Hanson wrote. “I thought I would see if Cummins has any interest in this piece of their history. I'm not looking for a dime, just wanting to save the old motor. I hauled a load of gravel with it in 1975. I don't think it has ran since.”
This message stirred the interest of Cummins, and a plan was launched. Watson would investigate its history, and if the story were true, Cummins would retrieve it.
The Forefather Engine 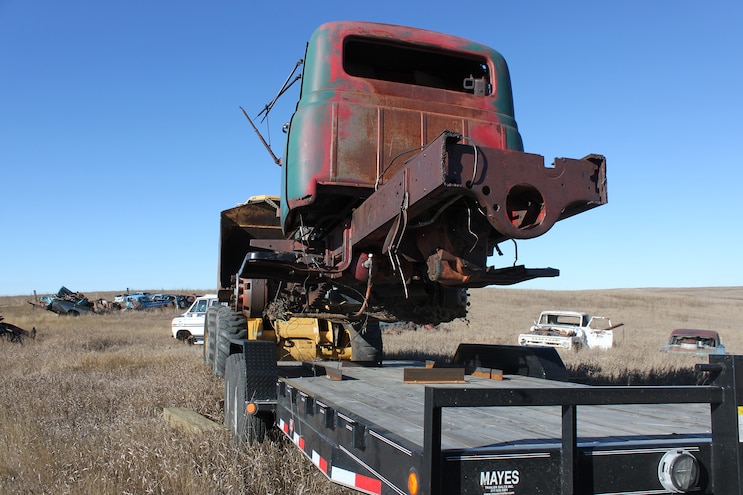 View Photo Gallery | 32 Photos
Photo 5/32   |   016 1939 Cummins International Field Find
Digging into the engine’s history, thanks to some photos sent from Sion prior to making the trip, Watson was able to read the serial number of 16022. This number identified the engine as being a Model HB built on August 15, 1939. Incredibly, Watson was also able to find the original Engine Building Order for it, spelling out all the parts to be included and its maximum 125 hp and 1,800 rpm.
While the engine is indeed old, it is actually quite significant. This engine is older than any H-series engines found in the archives. The H-series engine is the forefather of all Cummins engines and these engines helped launch the company as a truck engine manufacturer.
The H-series engine was first built as a prototype by Cummins founder Clessie Cummins and brought to life on November 19, 1931. The event was witnessed by many, including the designers, builders, and the family members of W.G. Irwin, who would later be the financial backer of Cummins. A newspaper at the time declared, “A babe was born in Columbus today—a babe of the automotive world, which in time may grow to be the most popular type of truck and bus power plant in the country.”
How prophetic the report would prove to be! The H-series engine began production in 1932. Its evolution would last nearly 60 years, to become the N14 in 1991, an engine that was still emissions compliant in North America in 2002 and is still in production today in South America and Asia. 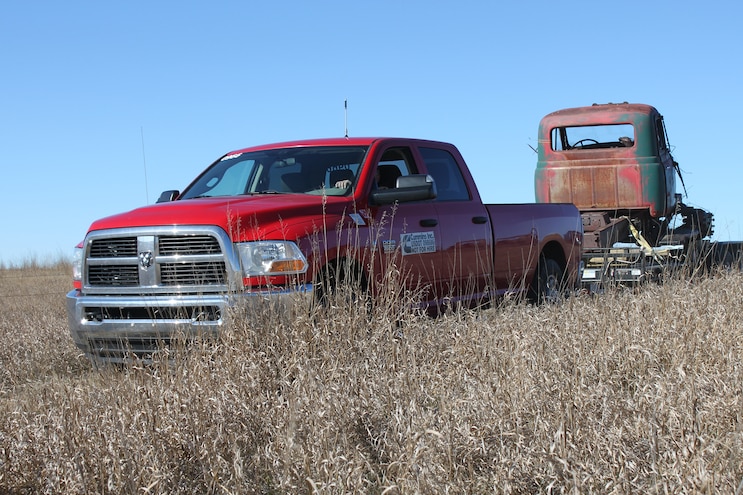 View Photo Gallery | 32 Photos
Photo 6/32   |   028 1939 Cummins International Field Find
This forefather now rests inside the Cummins facility after making the long trek from grassy fields and barren landscape near the little town of Bison, South Dakota.
What Happens Next?
What is going to happen to it now? Cummins is currently mulling over what it should do, and frankly, it is up in the air as of this writing. Whatever happens to it, we hope it doesn’t get shelved and lost again to history. It is a sight to see and should be shared with generations to come. With that, we’d like to hear your thoughts on what Cummins should do next with this ancient engine. Should they get it running on a stand? Transplant it into a newer chassis? Get the old International back in running shape and drive it across the country? Or simply melt it down and build new engines with the steel? Send your thoughts to mail@trucktrend.com and we’ll pass them along to our friends at Cummins (and maybe even print a few in a future issue).