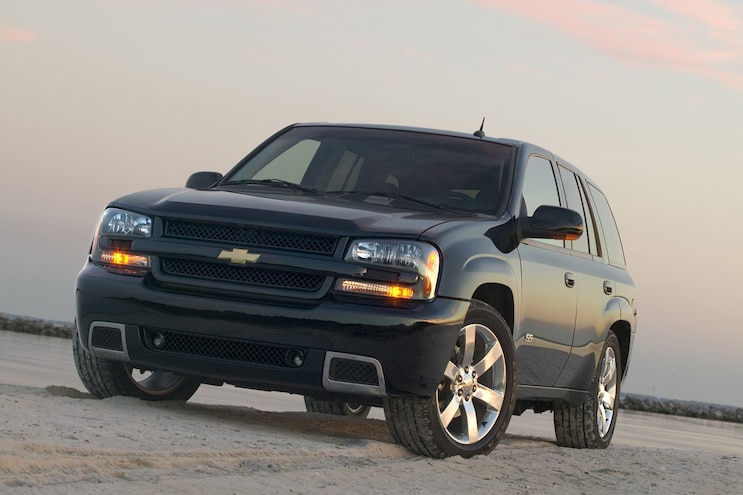 You may have read, seethed at, or hopefully enjoyed our list feature, “Seven Crossovers that Changed the Game.” That post looked at some of the early pioneers in the crossover segment responsible for making crossovers the global phenomenon they are today. This time, we’re going to look at how pervasive the crossover concept is, with several models that started out in the more conventional SUV mold (front engine, rear drive, longitudinal powertrain, and sometimes body-on-frame) and ultimately morphed into the more car-like conveyances they are today. Among them are many instantly recognizable names, as well as some you may have forgotten. Here are eight noteworthy names that made the transition.
Ford Explorer
When it debuted in the early ’90s, the Explorer was an instant sensation. It bridged the gap at the time between the small XJ Jeep Cherokee and the larger (and at that time, still typically two-door) fullsize SUVs such as the Chevrolet K-Blazer/Tahoe and Ford Bronco. The Explorer was also initially offered in two-door form as well, but the sales figures quickly showed customers going for the four-door model by orders of magnitude. 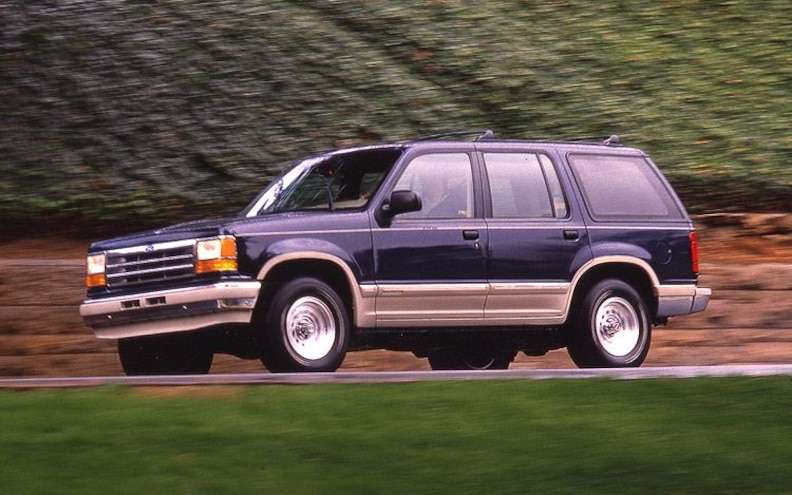 View Photo Gallery | 17 Photos
Photo 2/17   |   1991 Ford Explorer Front Three Quarter
Through the years, the Explorer became more refined, muscular, and capable, ultimately culminating in a more than 7,000-pound towing capacity, optional V-8 power, and an independent rear suspension. However, with customers increasingly flocking to the smaller Escape and Edge, it was clear the Explorer’s truckish formula no longer held the same appeal to customers. For the 2011 model year, the Explorer finally made the transition to the Taurus-based D4 platform. In the transition, it lost more than 2,000 pounds of towing capacity, its low-range transfer case, and any semblance of truckishness. Although sales never returned to the lofty levels of the mid-‘90s, sales in 2011 were more than double the year before. Sales in 2015 were at a nine-year high for Ford’s staple midsize SUV. 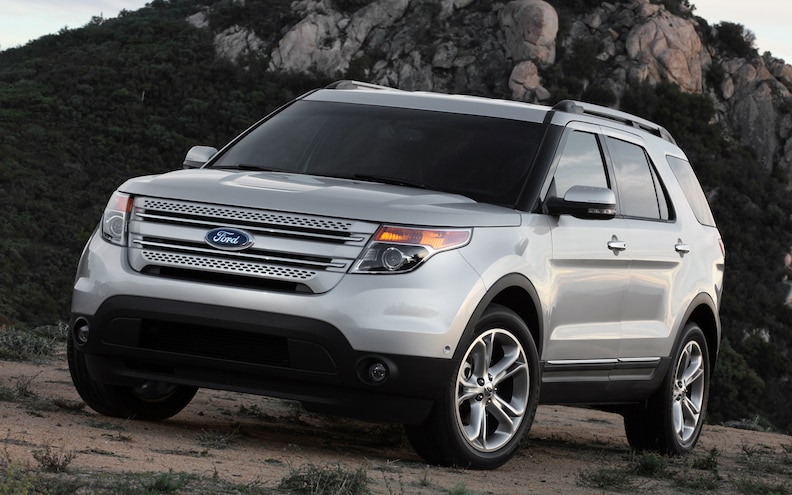 View Photo Gallery | 17 Photos
Photo 3/17   |   2011 Ford Explorer Front Three Quarter2
Nissan Pathfinder
The Pathfinder has one of the most interesting histories of vehicles on this list, having gone from body-on-frame to unibody, back to body-on-frame, and finally to a crossover. The early models were based on the Nissan Hardbody pickup chassis, initially offered as two-doors only. The four-door model appeared in 1990. The second-generation model arrived in 1995, switching to a unibody chassis. Infiniti sold a version known as the QX4. The 2001 model year brought the now-ubiquitous and highly regarded VQ35DE 3.5L V-6 engine. 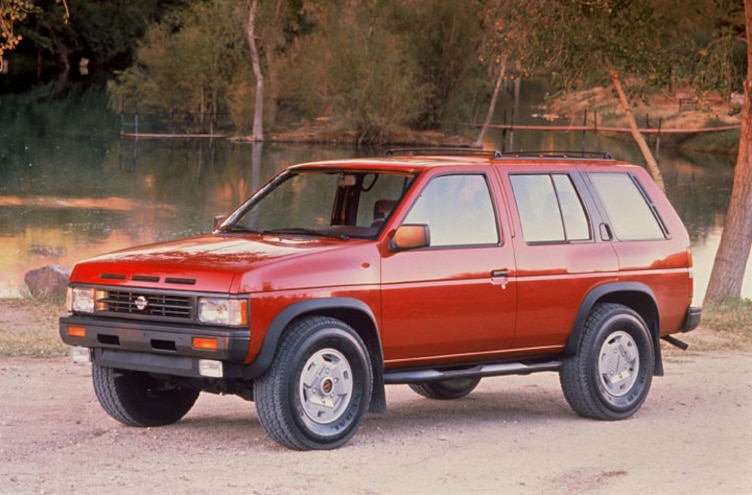 View Photo Gallery | 17 Photos
Photo 4/17   |   1990 Nissan Pathfinder
The third-generation Pathfinder returned to its truck roots with the 2005 model, which was built on a version of the Frontier’s F-Alpha platform. The Pathfinder became its manliest form yet in 2008, with the introduction of the burly 5.6L V-8 with 310 hp and 388 lb-ft of torque. The timing of the V-8 model was unfortunate, with gasoline going to $4 a gallon in many parts of the country, against the model’s shockingly thirsty 12 mpg city and 18 mpg highway. Consequently, the development of the next-generation Pathfinder took a sharp turn in the direction of efficiency. The 2013 model, offered only with the 3.5L VQ35DE engine and a much-improved mileage of 19-20 city and 25-26 highway. With the transition of the Pathfinder to crossover and the discontinuation of the Xterra, that leaves the Patrol-based fullsize Armada as the only “true” SUV in Nissan’s lineup. 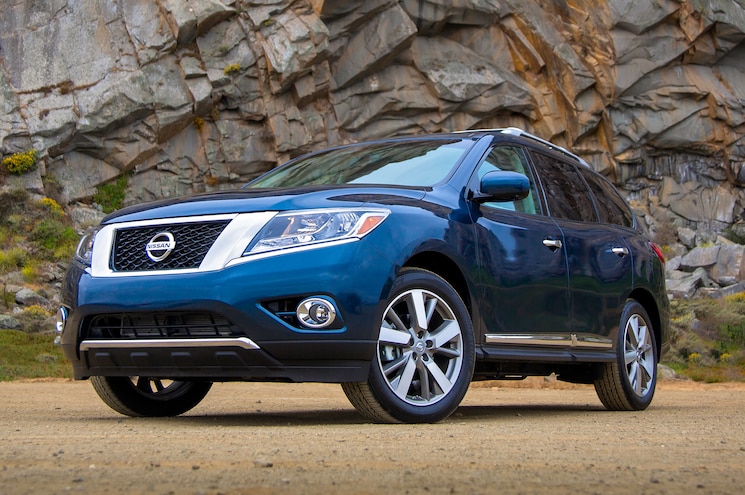 View Photo Gallery | 17 Photos
Photo 5/17   |   2013 Nissan Pathfinder Three Quarters Drivers View
Jeep Cherokee
For the purposes of this post, we’re starting with the ’80s XJ Cherokee, although the name was used since 1974 on the fullsize SJ model. The 1984 Cherokee was compact and unibody. Initially introduced with an anemic carbureted 2.8L General Motors OHV V-6, the power issue was rectified in 1987 with the addition of the 4.0L Power Tech I-6. The XJ Cherokee enjoyed a long life until 2002, when it was replaced by the Liberty, which oddly enough was still named the Cherokee for overseas markets. Two generations of the Liberty were finally replaced by the KL Cherokee for the 2014 model year. 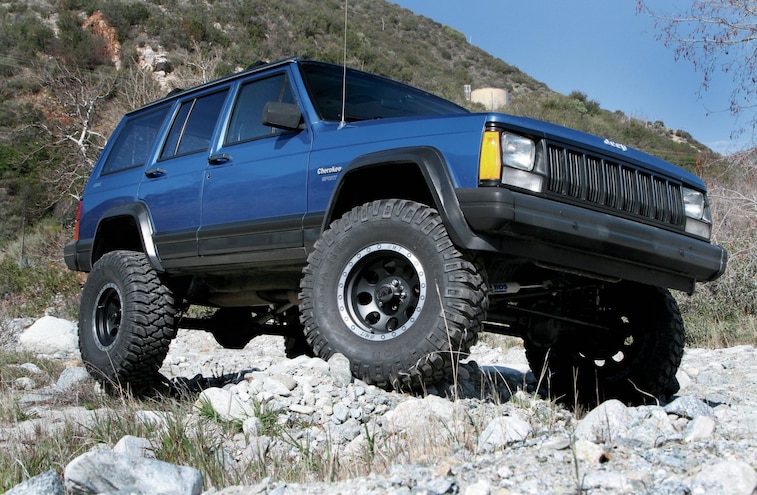 View Photo Gallery | 17 Photos
Photo 6/17   |   1995 Jeep Cherokee XJ Front Three Quarter
The KL Cherokee’s launch was delayed for several months due to calibration issues with the new nine-speed automatic transmission. Despite its controversial styling, the Fiat-based KL Cherokee went on to become Jeep’s best-selling model. Although we usually lament the transition from full-fledged SUV to crossover, in the case of the KL, it was a massive improvement compared to the Liberty in efficiency, refinement, power, and features, and matched or exceeded it in off-road capability. It was truly a win all the way around. 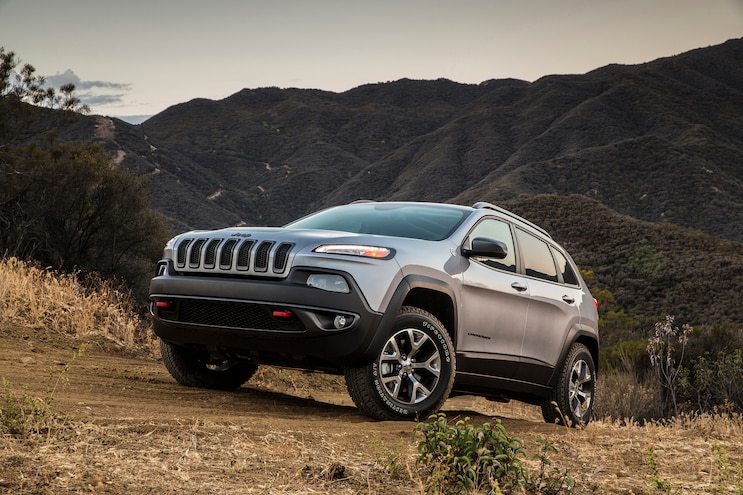 View Photo Gallery | 17 Photos
Photo 7/17   |   2016 Jeep Cherokee Trailhawk Front Three Quarters
Acura SLX/MDX
When you say “Acura SUV,” most people instinctively think MDX. While it’s true the MDX was Acura’s first in-house developed SUV, it was not the first Acura-branded SUV. That distinction goes to the Isuzu Trooper-based SLX. The Trooper was well-regarded in its own right, but it was a distinctly truck-like proposition, with a body-on-frame chassis and two-speed transfer case. The successor MDX was much better-suited to the Acura brand with its transverse, unibody platform, and buttery-smooth Honda-engineered V-6. 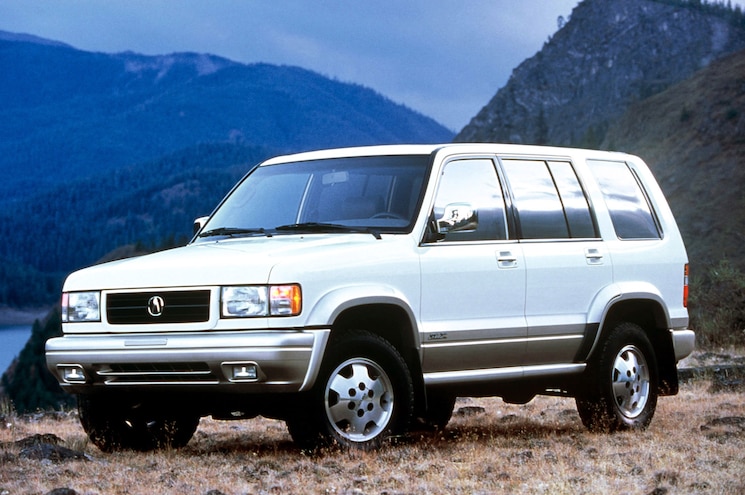 View Photo Gallery | 17 Photos
Photo 8/17   |   1996 Acura Slx
The MDX has gone on to become Acura’s best-selling model by a substantial margin, with only its little brother RDX crossover coming close. Among premium midsize crossovers, the MDX represents a great value, and is pretty rewarding to drive, as far as crossovers go. 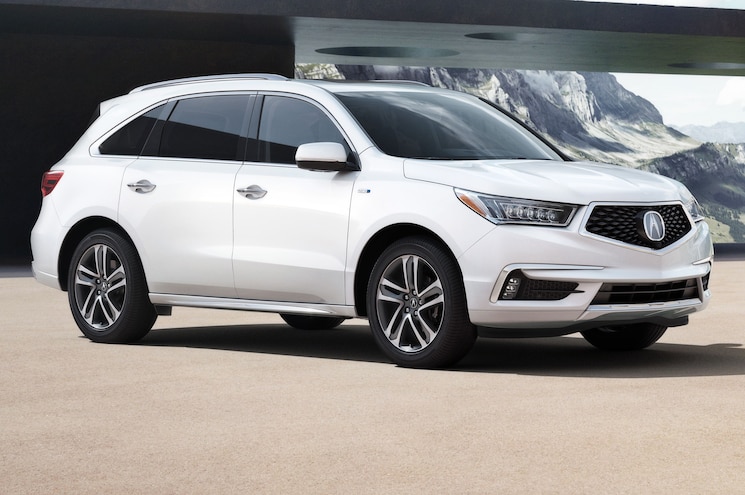 View Photo Gallery | 17 Photos
Photo 9/17   |   2017 Acura MDX Front Side View
Honda Passport/Pilot
The SLX was not the only collaboration between Honda and Isuzu. Before the Pilot was the Isuzu Rodeo-based Honda Passport. As with the SLX, there was nothing inherently wrong with the Passport. However, its truckish roots were an odd fit for the Honda brand. The Passport served its purpose as a placeholder in the Honda lineup while the Pilot was under development, likely to placate dealers that were screaming for a midsize SUV offering in the heyday of the mid-‘90s and early 2000s.

View Photo Gallery | 17 Photos
Photo 10/17   |   1995 Honda Passport EX
The Pilot proved the wisdom of Honda’s strategy, doubling its sales between 2002 and 2003 and averaging more than 100,000 unit sales in most years since. As was the case with the Explorer and Escape, the CR-V ultimately became the much better-selling model between the two. However, the Pilot fills an important role in the Honda lineup for those that want a family hauler but can’t quite bring themselves to getting a minivan. 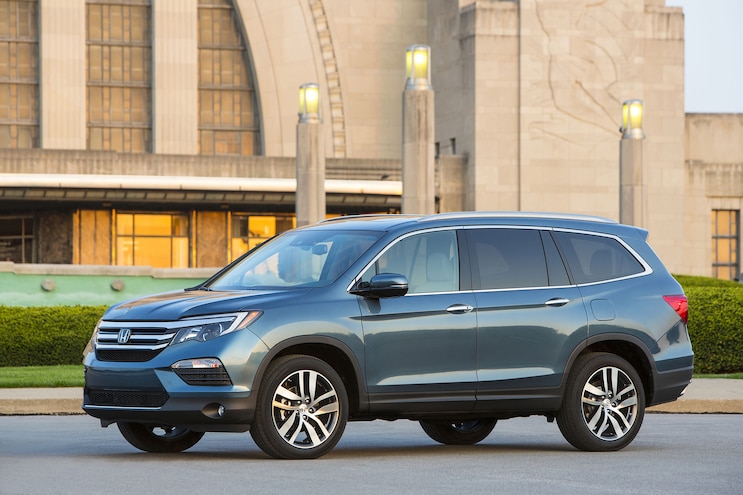 View Photo Gallery | 17 Photos
Photo 11/17   |   075 2016 Honda Pilot Suv First Drive
Chevrolet Trailblazer/Traverse
Here’s one transition we somewhat lament. Not that the Traverse is a bad vehicle, but rather it marked a sharp transition in the direction of practicality over fun. Of course, we’re talking about the Trailblazer SS model sold from 2006-2009. Slightly more affordable than the Grand Cherokee SRT8, the SS packed Corvette power in the form of the LS2 6.0L high-output V-8 in a midsize SUV, making it one of the fastest SUVs you could buy at the time for less than $40,000. 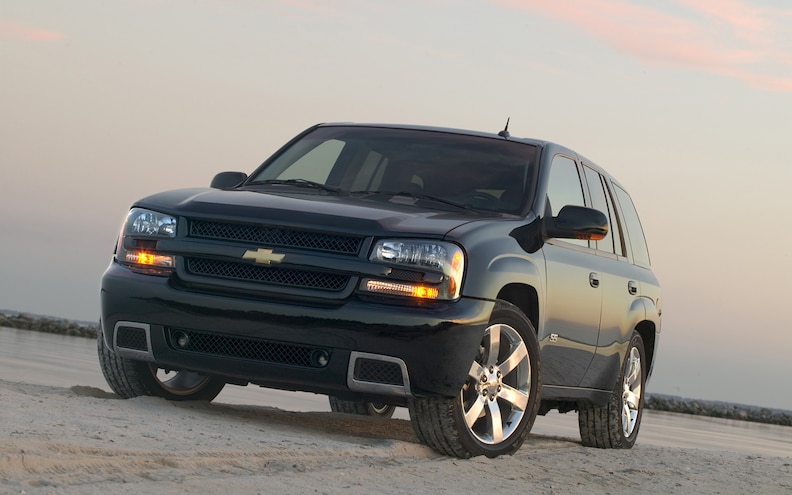 View Photo Gallery | 17 Photos
Photo 12/17   |   2006 Chevrolet Trailblazer SS Front View
The Traverse, which effectively replaced the Trailblazer, was a much more utilitarian proposition, more in the mode of a minivan than an SUV. It has much greater cargo capacity than the Trailblazer, but a lower towing capacity. No more V-8 hooliganism for the Traverse, which was powered exclusively by GM’s 3.6L “high-feature” V-6. In an odd twist of fate, the Trailblazer name lived on overseas, in a Colorado-based body-on-frame 4x4 SUV sold in Asia and Australia. There have been faint rumors it could make a comeback to the U.S. market, possibly with the 2.8L Duramax diesel. We’ve got our fingers crossed. 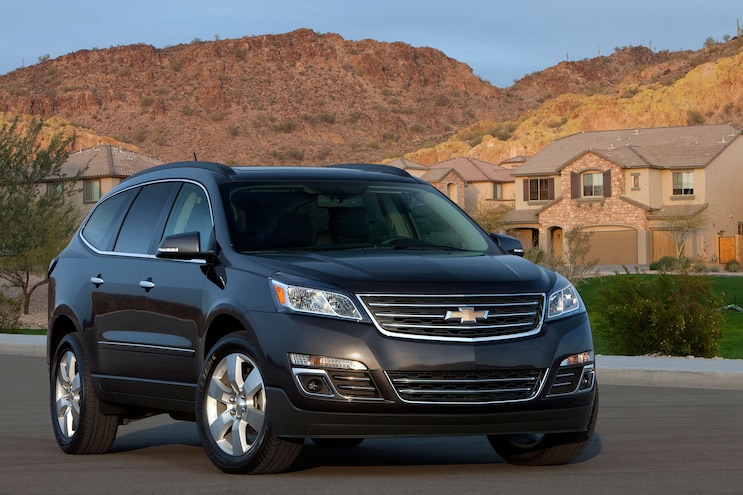 View Photo Gallery | 17 Photos
Photo 13/17   |   2015 Chevrolet Traverse LTZ Front View
Cadillac SRX
The SRX is somewhat of an oddball on this list, as it went from being a crossover to a crossover. However, the form it took between the first and second generation was a radical change. The first-generation SRX had a longitudinal powertrain and offered Cadillac’s excellent Northstar 4.6L DOHC V-8 as an option. Its underpinnings were based on the Cadillac STS sedan of the time (roughly equivalent to today’s CT6), giving it distinctly car-like driving manners, and some critics comparing its driving character to the much higher-priced and performance-oriented Porsche Cayenne and BMW X5. 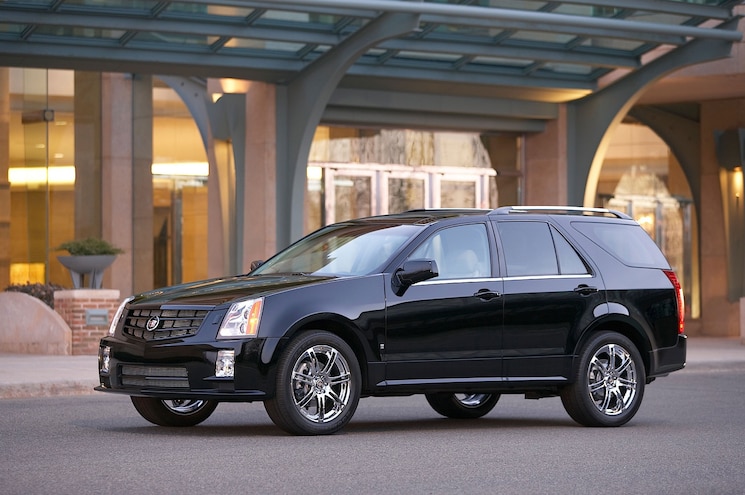 View Photo Gallery | 17 Photos
Photo 14/17   |   2009 Cadillac Srx
However, the sales chart tells the tale. The highest sales the dynamically excellent first-generation SRX had were 30,000 units in its first year on the market. The second-generation model, riding on a variation of the Chevrolet Equinox chassis, has never sold less than 50,000 units, and in 2015, approached 70,000 unit sales, making it by far the best-selling model in the Cadillac lineup. 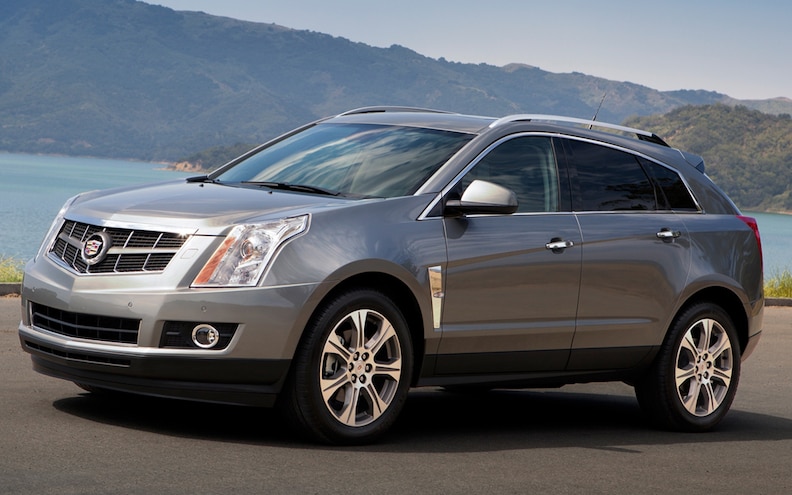 View Photo Gallery | 17 Photos
Photo 15/17   |   2012 Cadillac SRX Promo
Lincoln Aviator/MKX
Lincoln briefly sold a rebadged Explorer under the Aviator name from 2003 to 2005. Packing a high-performance DOHC 4.6L V-8, the Aviator for all intents and purposes looked like a 7/8-scale Navigator. Sales totaled a respectable 29,517 units in 2003. Unlike the SRX and other models that saw a significant sales increase with the successor crossover model, sales of the Edge-based MKX were not notably higher than the Aviator. However, Lincoln did add a second, larger three-row MKT model that conceivably split the difference. The MKT has sold in miniscule numbers since its introduction and is primarily a fleet proposition, ostensibly replacing the Town Car. 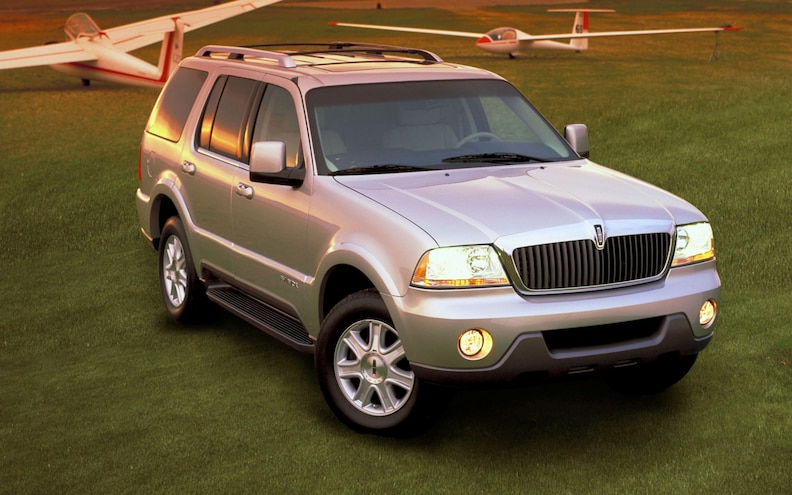 View Photo Gallery | 17 Photos
Photo 16/17   |   2003 Lincoln Aviator Front Three Quarters
The Latest MKX is a solid effort, with fresh, contemporary styling, and available EcoBoost V-6 power. Although Lincoln still has a long way to go to catch up with its German and Japanese luxury rivals in sales, the MKX and smaller companion MKC will likely play a pivotal part in the turnaround. 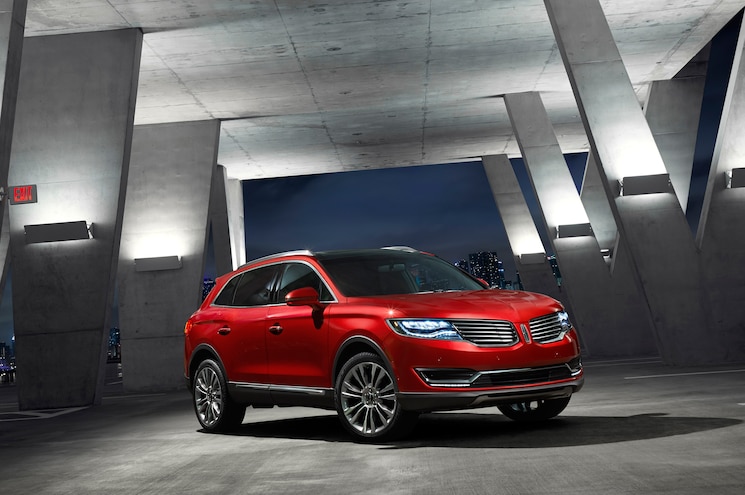