Of all the paths that can be taken on a gearhead’s way to becoming a diesel enthusiast, we’re pretty sure making a move from riding a zippy little street bike to driving a Cummins-powered Dodge Ram pickup is one of the least-taken routes. This is why we’re glad Apache Junction, Arizona’s Don Glasco not only likes the thought of owning a diesel truck—he’s actually head over heels in love with the idea.
Don has taken his truck—the ’06 Dodge Ram 2500 you see here—and systematically transformed it from being a bone-stock cruiser to a high-powered rig that can hit the dragstrip and still rack up the highway miles. So, exactly how does one leave the world of motorcycles with engines that turn five-digit rpm to enter the realm of tugboat-type torque and big-bore performance? Well, in Don’s case, it was accidental. 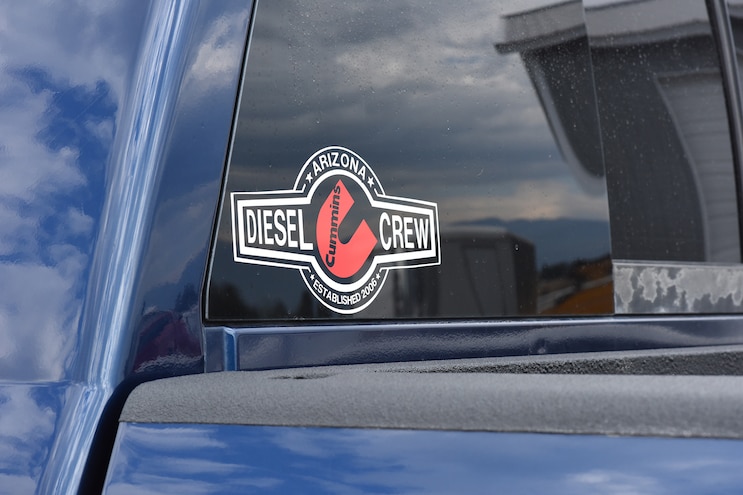 View Photo Gallery | 29 Photos
Photo 2/29   |   020 2006 Dodge Ram
“I had owned a Jeep for a while, and then I got rid of that for a sport bike,” Don tells us. “After having the bike for some time, I decided I wanted a truck. I had actually gone to the dealer to look at another truck when I saw this one. I drove it and really liked it, so I bought it.” While that appeared to be a happy beginning to the 2500’s new lease on life, the honeymoon did not last too long. “I owned the truck for a week and ran into some big transmission issues,” Don says. “I was planning on taking it back to the dealer, getting my money back, and buying something else, but all of my friends convinced me to keep the thing.” The truck was taken to noted transmission builder Fred Swanson, where the gearbox received the full billet treatment and has been a sweet-shifting unit since then.
With the transmission now built to handle virtually everything Don would likely ever throw at it, Don began modifying the engine with more fueling, boost, free-flowing air (intake and exhaust), and performance-oriented tuning. “The BorgWarner billet S475 turbocharger built by Fleece Performance Engineering is my favorite modification,” Don says. “It’s a night-and-day difference in performance. When I stepped up the injectors after that, the truck really woke up.” That’s an understatement in our book, because this machine has laid down 1,080 hp and 1,896 lb-ft of torque on the chassis dyno, and its 5.9L Cummins engine shows no signs of letting up. “The truck will break the tires loose almost whenever you want it to. It makes a lot of power, and I have surprised lots of non-diesel people with rides when I show them how fast it is. The first time I got in it after the changes, it about took my breath away,” Don says.
While all the performance upgrades make the truck extremely fun to drive and play with, there’s another important element of this rig to consider: It’s Don’s daily driver and he drives it a ton. And they aren’t all velvety-smooth highway miles, either. With Don being an oil worker who drives into and out of rigs surrounded by dirt, dust, silt, muck, and mire on a daily basis, he really needs a truck that’s capable of handling the yeoman’s task. Thanks to the upgraded horsepower and torque, the Dodge Ram 2500 is very capable of getting the job done and can also cruise down the highway knocking back 21 mpg. We’d like to see someone try to do that with a gas-powered truck that has similar traits. Between the horrid fuel economy and ragged-edge racing parts, a gas burner would never match it. 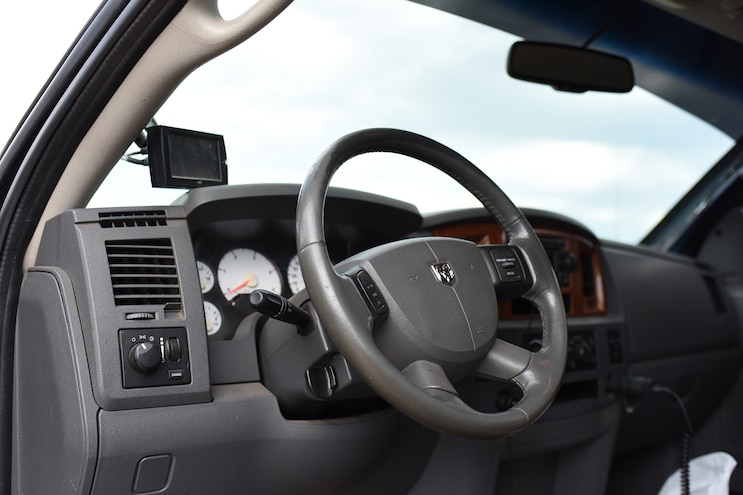 View Photo Gallery | 29 Photos
Photo 3/29   |   024 2006 Dodge Ram
Externally, Don has taken an understated approach with the Dodge Ram. Up front, he changed the bumper to one from a Laramie-model Ram, which is a popular upgrade among owners. And back in the rear, he removed the bumper, added a roll pan, and upgraded the tailgate to one from a fourth-generation truck. The changes are subtle, cosmetic mods that people who are really into pickups will notice right away, yet they’ll be hidden in plain sight for folks who aren’t familiar with the truck scene. Sometimes, those types of custom touches really do work the best. The interior is stock as delivered by Dodge in 2006, with the only notable addition being an Edge Products CTS Insight monitor to keep tabs on the engine’s vitals while driving down the road or at the dragstrip.
The allure of diesel trucks got Don off of a sport bike—a vehicle that falls on the opposite end of the performance spectrum. Motorcycles and oil-burning pickups both have their merits and their fun factor. Ultimately, though, for Don, this big blue Dodge Ram won out. 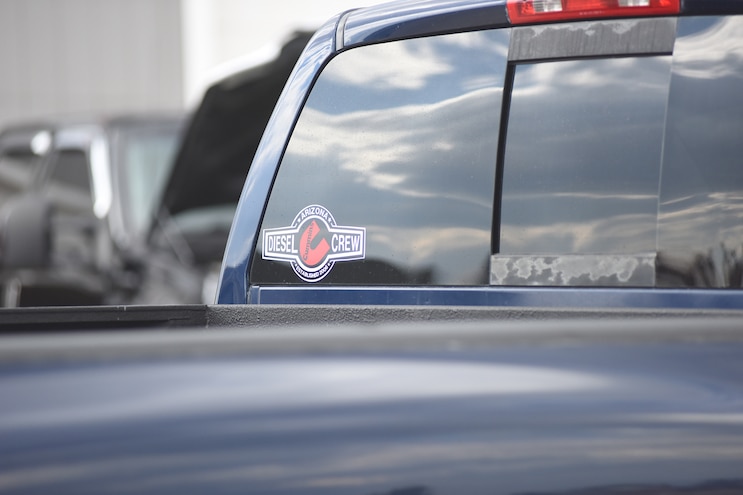 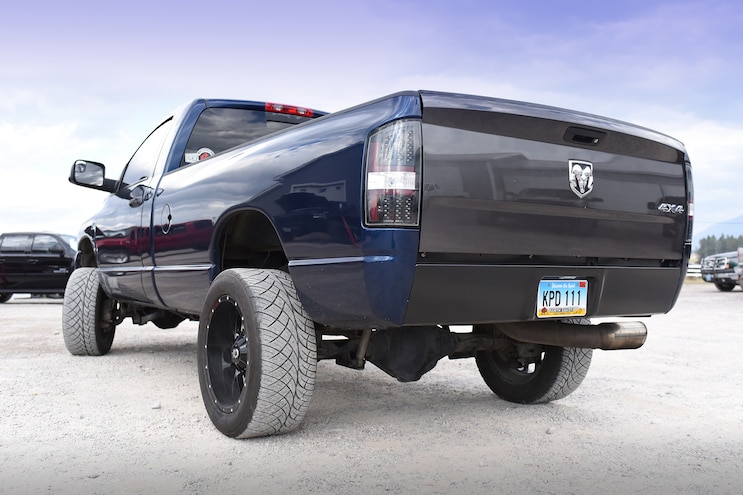 View Photo Gallery | 29 Photos
Photo 5/29   |   002 2006 Dodge Ram Rear Lower
Don Glasco’s ’06 Dodge Ram 2500 is a clean truck that is far more powerful than stock, thanks to some carefully thought out modifications. In a world of crew cab trucks, it’s great to see a regular cab longbed being treated as well as Don’s. 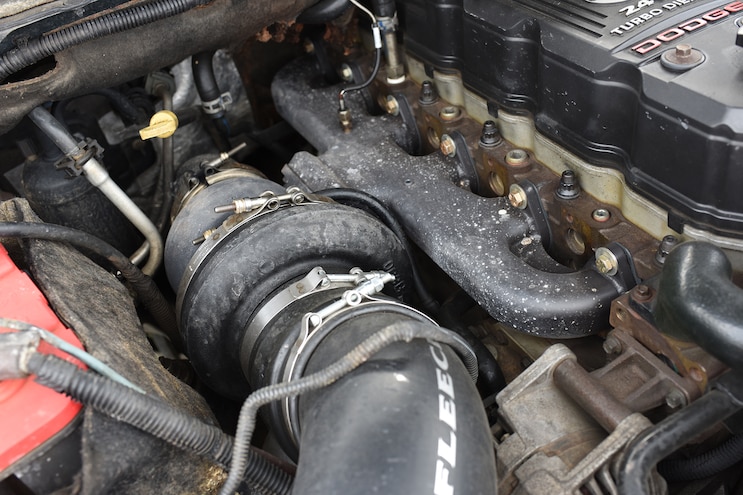 View Photo Gallery | 29 Photos
Photo 6/29   |   003 2006 Dodge Ram Turbo Manfold
Powerful trucks have a few things in common, and one of them is a quality turbocharger. Don went with a BorgWarner billet S475 built by Fleece Performance Engineering, which is fed by a Steed Speed T4 exhaust manifold. How potent is this truck’s engine combination? How does 1,080 hp and 1,896 lb-ft of torque sound? 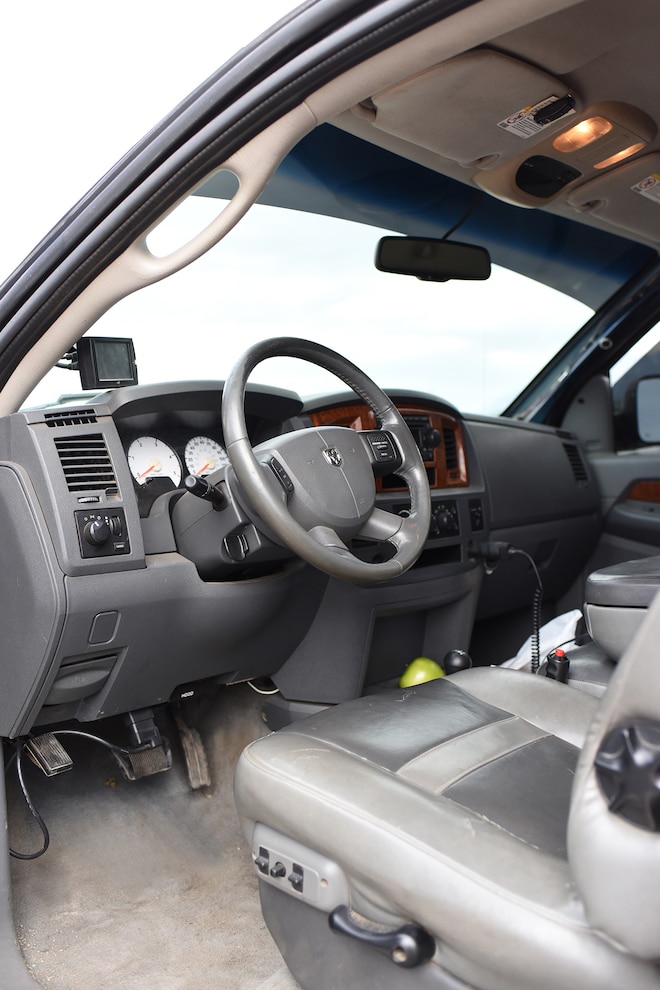 View Photo Gallery | 29 Photos
Photo 7/29   |   004 2006 Dodge Ram Interior
While he certainly altered the truck’s engine and outward appearance, Don decided to leave the stock interior intact, save for the addition of an Edge Products CTS Insight monitor. With those comfy-looking leather seats, we can’t say we blame him. 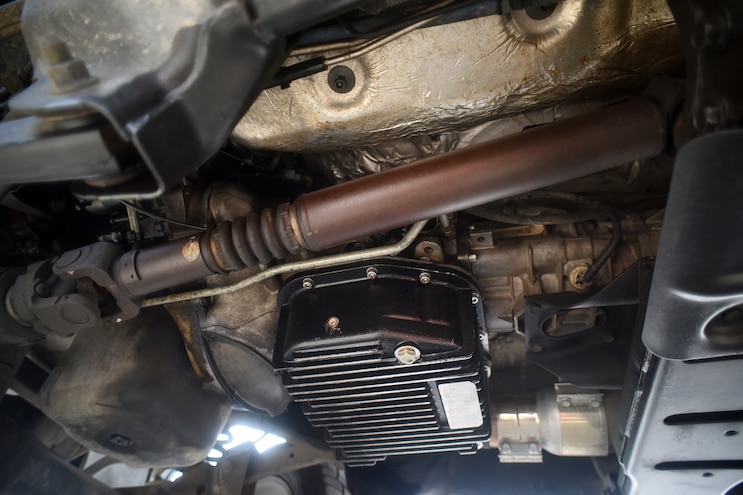 View Photo Gallery | 29 Photos
Photo 8/29   |   005 2006 Dodge Ram Transmission
The 48RE four-speed automatic transmission—ironically one of the strongest parts on the rig—nearly ended Don’s diesel truck experience before it started. The transmission acted up shortly after Don bought the pickup, and he almost gave it back to the dealer. But, before doing that, he took the ailing gearbox to transmission guru Fred Swanson, and the shifting has been perfect ever since. 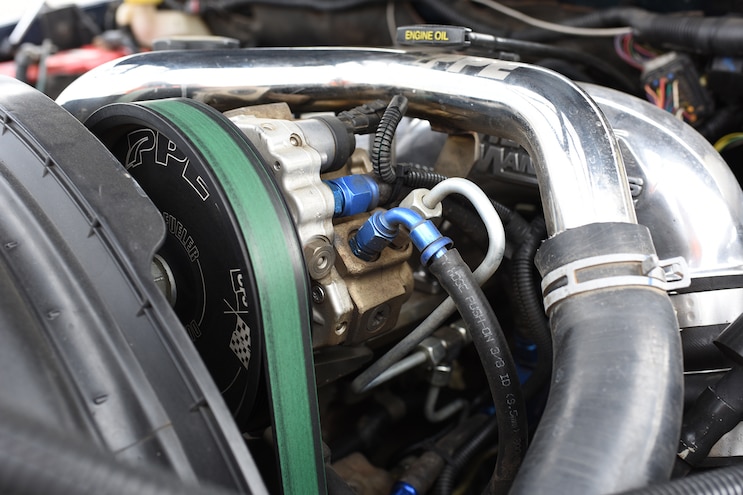 View Photo Gallery | 29 Photos
Photo 9/29   |   006 2006 Dodge Ram Fuelpump
At the end of the day, every engine is only as good as the fuel system that feeds it. The 5.9L Cummins in Don’s rig is outfitted with a stout, dual-CP3 injection pump setup that uses an Industrial Injection 85-percent-over lower pump and a Duramax LB7 upper pump to move fuel to S&S Diesel Motorsports 250-percent-over injectors. 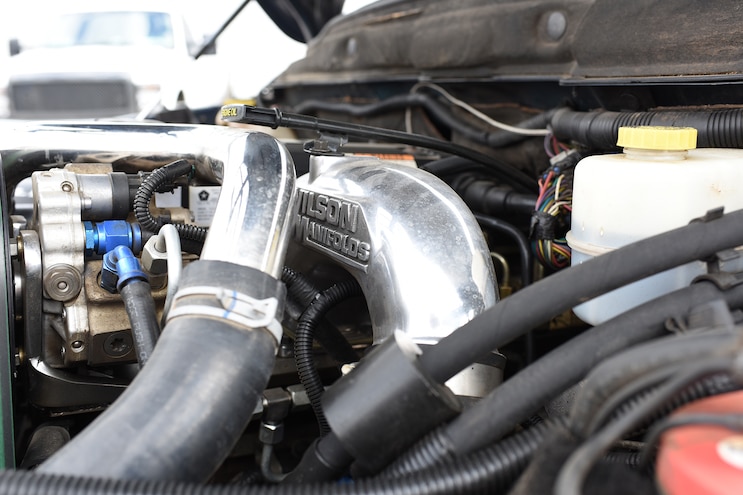 View Photo Gallery | 29 Photos
Photo 10/29   |   007 2006 Dodge Ram Intake
The Wilson Manifolds Thrasher intake elbow is an important piece of the engine. The factory elbow is not designed for performance and can limit airflow to the rear three cylinders. The bigger turbo and other engine modifications would be useless without this piece. 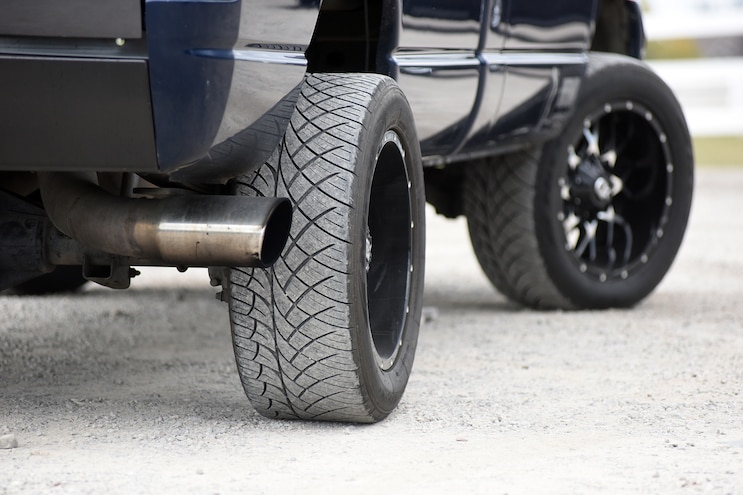 View Photo Gallery | 29 Photos
Photo 11/29   |   008 2006 Dodge Ram Tires
Performance impresses the people inside the truck, but stance and appearance are the key attractions for the people looking at it. Don went with a Hell Bent Steel 2.5-inch leveling kit up front and 2-inch drop shackles in the back to achieve the perfect stance for his rig. 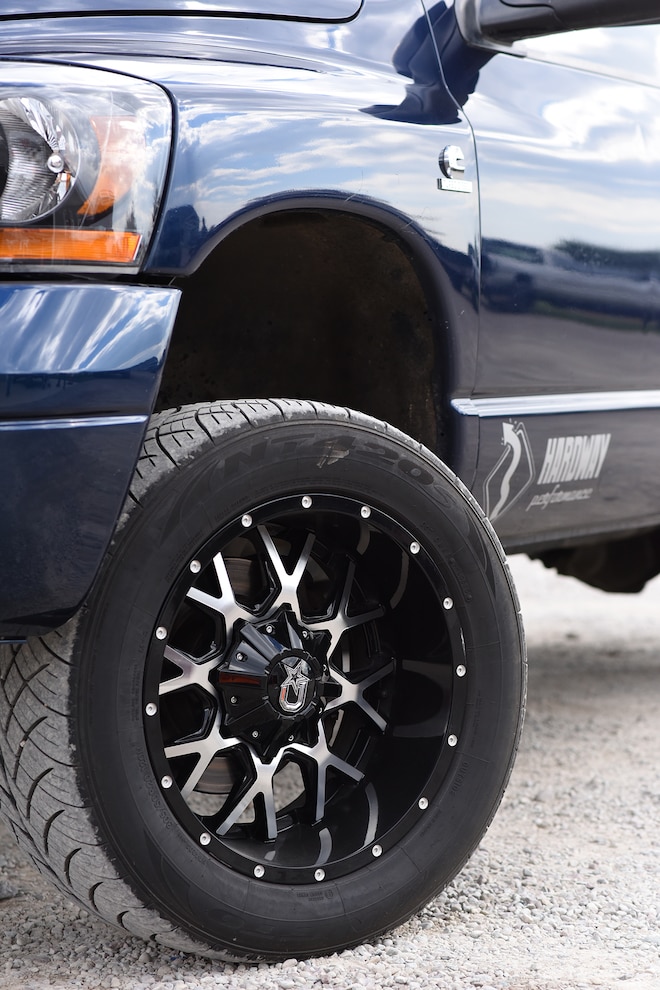 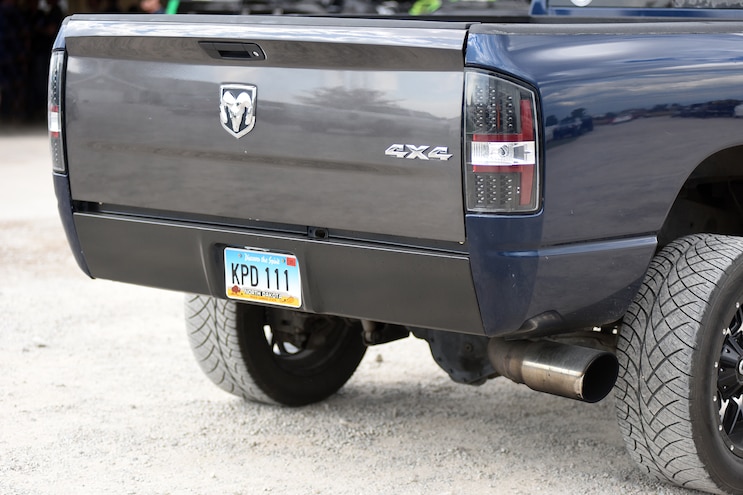 View Photo Gallery | 29 Photos
Photo 13/29   |   010 2006 Dodge Ram Tailgate
Don made some subtle styling upgrades at the rear of the truck. By adding a roll pan and eliminating the bumper, he certainly created a cleaner look. The addition of the fourth-generation tailgate also modernizes the rig and maintains a seamless look. 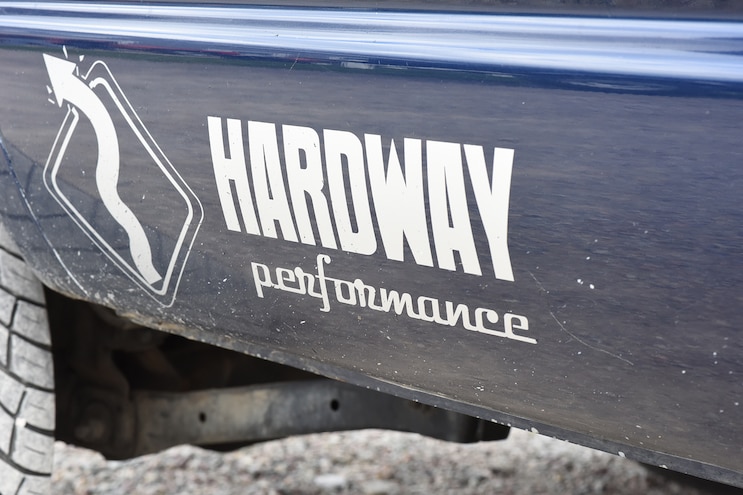 View Photo Gallery | 29 Photos
Photo 14/29   |   011 2006 Dodge Ram Rocker
Hardway Performance Solutions has been instrumental in helping Don reach a level of near perfection with his build. And, to thank them, the Hardway logo is one of only two stickers on his whole truck. 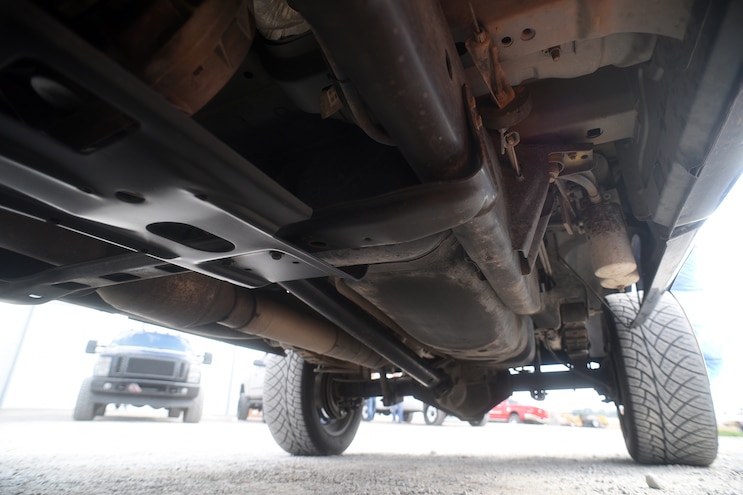 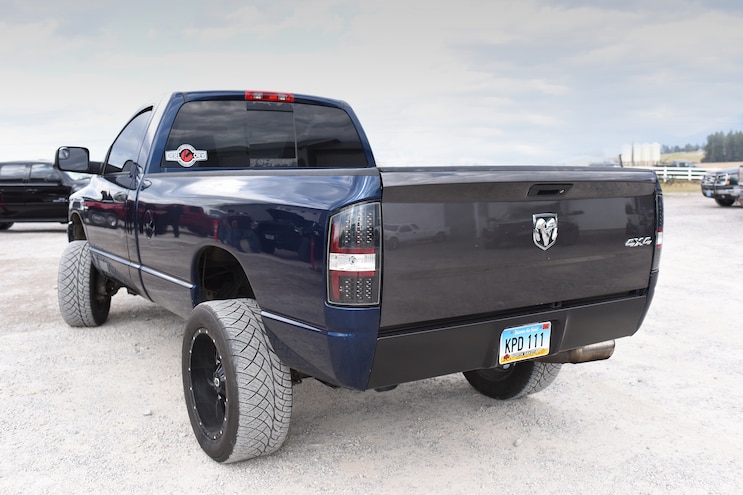 View Photo Gallery | 29 Photos
Photo 16/29   |   013 2006 Dodge Ram Rearthreequarter
With one trip to the local dragstrip under his belt, Don hopes to better his personal best e.t. of 7.60 seconds at 89 mph in the eighth-mile. Using common conversion tables, this means the truck is capable of 11-second quarter-mile passes. That’s with no traction bars or other aids—and that’s really moving for a street truck!