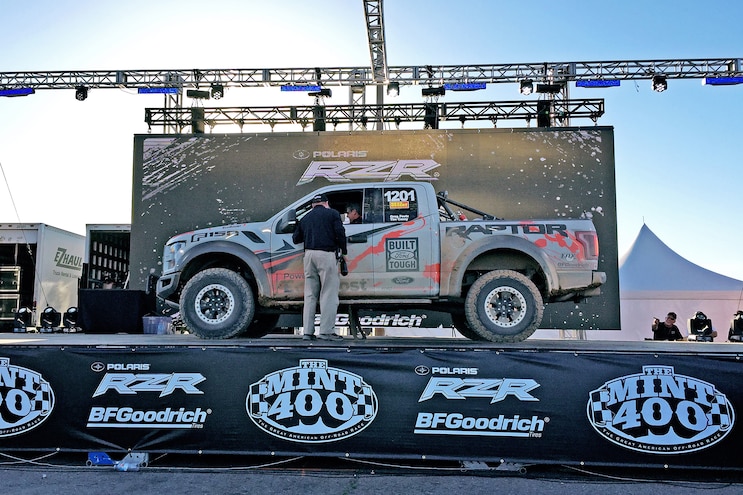 It was four in the morning when the alarm went off at the slimy motel I was staying at just across the California/Nevada state line. I threw the alarm clock across the room, smashing it into a zillion pieces, before sliding out of bed in a flaming ball of glory proclaiming loudly “Today is the day I become a champion!” Or maybe that was just the dream I was having as my iPhone’s alarm gently alerted me that it was time to get suited up and head for the starting line. Either way, it was the morning of the 2016 Mint 400 and I was set to be a part of history.
The Mint 400 is an off-road race that takes place outside of Las Vegas, Nevada. It was first run in 1967 as a publicity stunt for the Mint hotel and casino when Norm Johnson sent two matching buggies across the Nevada desert from the Mint in Las Vegas to the Sahara in Lake Tahoe. From there it expanded to become the largest off-road race in the United States, until in ended in 1989, two years after the Mint hotel changed ownership. Fast-forward 20 years and in 2008 the Southern Nevada Off-Road Enthusiast group (SNORE) resurrected the race with the help of General Tires. Eventually the rights would be sold to the Martelli Brothers, and Best in the Desert (BITD) would take over as the sanctioning body. And that brings us to where we are today.
Back at the starting line it was a brisk morning as we suited up for our 6:00AM start time. As you’ll see here, Ford has teamed up with Greg Foutz and Foutz Motorsports to campaign a 2017 F-150 Raptor in the 2016 BITD race series ahead of its public debut this coming fall. And I was fortunate enough to be asked to race the Mint 400 with the team. Racing in the Stock Production class meant that we would do two laps of the grueling 113-mile course. Starting the race was Foutz’s driving partner Tim Casey, with Travis Leach co-driving and PickupTrucks.com’s (and Truck Trend’s former) Editor Mark Williams riding.
The first lap went smooth, with the team bringing the truck back into the main pit in a little over three hours. This is where we did a driver change, with Greg Foutz taking over the wheel, Bill Rante in the right seat, and myself as passenger. Duties for the third-seat rider are pretty slim, so I just settled in for the ride. For the first 50 miles the truck ran great. Power from the new high-output 3.5L EcoBoost is fantastic, the 10-speed transmission is fun to drive, and the new Baja Terrain mode gave the Raptor a real race truck feel. The suspension sucked up the tire-swallowing holes with ease and the BFGoodrich tires did their job gripping the dirt. From inside the truck you would never know that it was a production pickup and not a full-blown desert racer. 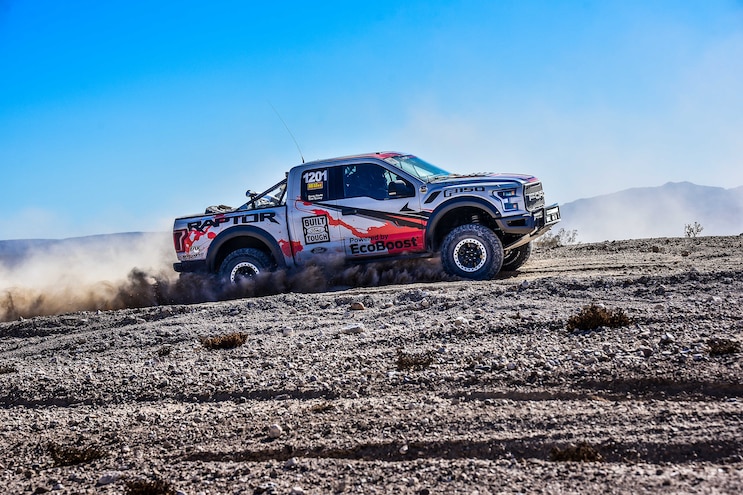 View Photo Gallery | 9 Photos
Photo 2/9   |   007 Mint 400 2017 Ford F 150 Raptor
It was about Mile 55 where the course started to take the upper hand. After pounding through 168 miles of absolutely punishing topography, Greg noticed a loose feeling in the steering wheel. We pulled over and upon inspection noticed that the rear bolt on the front passenger lower control arm had come loose. Greg and Bill grabbed some tools, got it tight, and we were back underway in no time flat. Unfortunately, a few miles latter it happened again. This time, however, the bolt had pulled the nut through the damaged sheet metal of the lower control arm mount. We promptly got on the radio and alerted the crew at Pit B, located at race mile 71, to start looking for a welder, washers, and a new bolt. While limping the truck the last ten miles to the pit, as if we needed another issue, the truck experienced a flat tire. None of us were able to find the damage that caused the tire to go flat, so that remains a mystery to this day. After an expeditious tire change we were back underway, praying the truck would stay together long enough to get us to the pit.
Through Greg’s skillful driving we made it to the pit, where the crew was waiting for us and eager to get the fix complete and us back on the course. After scavenging a bolt from the other ’17 prototype Raptor that was being used as a chase truck, welding washers into place to hold said bolt, and also welding the bolt’s nut to the chassis to prevent it from backing off again, we were back underway. However, thanks to the downtime caused by limping the truck to the pit and then the repairs, the unlimited classes had started their race and were hunting us down quick. 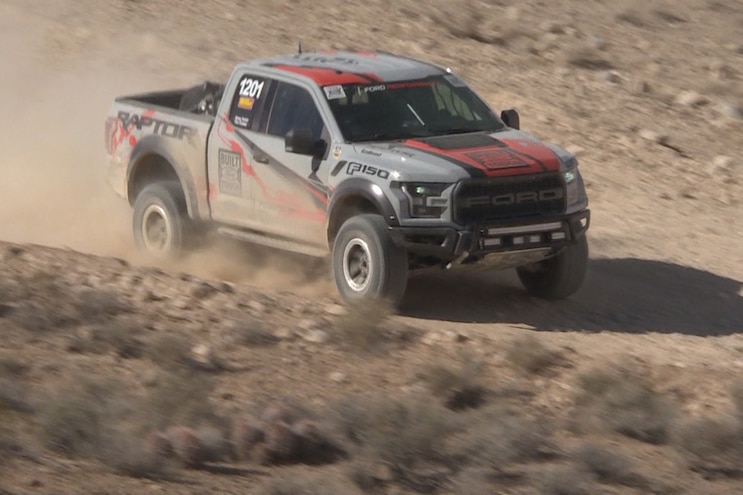 View Photo Gallery | 9 Photos
Photo 3/9   |   002 Mint 400 2017 Ford F 150 Raptor
This may not seem like a big deal until you consider that in a section of race course where we could comfortably go 40 MPH, the unlimited Trick Trucks were passing us at 115 MPH. Seriously, head over to YouTube if you don’t believe me, the unlimited trucks and buggies are amazing. This made for a very nerve racking second half of our lap, as these guys caught and passed us sometimes before we had time to get out of the way (or even see them coming). One mistake could have caused a horrible accident that none of us wanted. Though we had some close calls we were fortunate enough to not tangle with the beasts.
We hit one more snag at race mile 80, when the intake tube connecting the intercooler to the engine came loose, causing the truck to lose power. This was again a quick fix, and Greg and Bill had the truck pointed at the finish line in no time. All told, we crossed the finish line in 9 hours and 10 minutes, thus winning our class and earning the title of Mint 400 champions! This was no small feat, considering only 28 of the 63 vehicles that started with our group actually finished (only 190 out 339 entries total crossed the finish line in the allotted time limit.)

View Photo Gallery | 9 Photos
Photo 5/9   |   NewImage
While the team triumphed through adversity, the real star of the show is the ’17 F-150 Raptor. As it stands now, the ’17 Raptor is one tough machine. While purpose-built race vehicles were falling by the wayside, the Raptor pushed on. And in reality, the issue we experienced was a fluke. A simple loose bolt, one that likely should have been replaced after the first race anyway. With a few small exceptions, mostly for safety, the truck we raced is exactly as you’ll be able to buy it from the dealer. I couldn’t help but smile as we took the checkered flag with the air conditioning cranked, windows rolled up, and SiriusXM radio blasting some heavy metal. There was not a single other vehicle on the course that could do the same. Heck, my race suit is barely even dirty.
It was an honor and a privilege to be among the first to ride in a ’17 Raptor, and one of only two outsiders to ride in the race truck. The truck is beyond impressive, and the crew from Foutz Motorsports did an excellent job getting it to the finish line in what is arguably the most difficult off-road race in the U.S. I would love to see the other manufacturers who claim to have off-road packages jump into this scene and race against the Raptor in the Production Stock class. And I cannot wait to jump behind the wheel of the production second-generation Raptor later this year.