Of Course, the Harder You Work, the Luckier You Get! 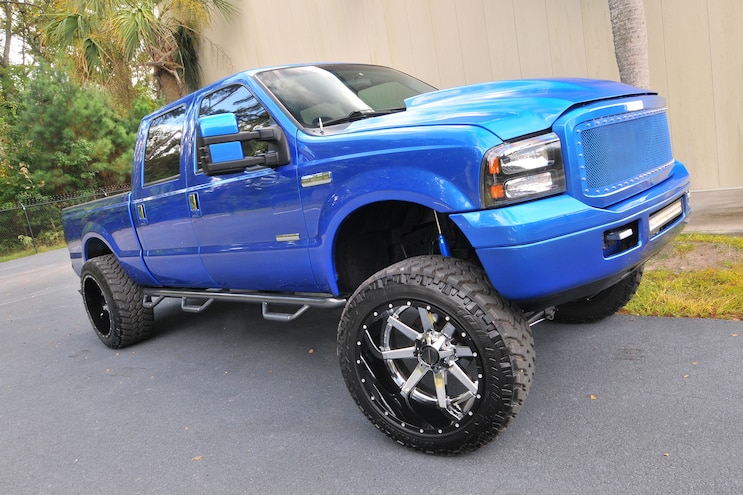 Growing up in a family in which both Mom and Dad already have lifted trucks is not only an advantage, it also points you in the right direction when it’s time for a truck of your own. Twenty-one-year-old Brinton Roberts, a firefighter from Beaufort, South Carolina, has always been interested in trucks. He started early—really early. He had his first four-wheeler at age five and got his first truck, a Ford Ranger, when he was eight! Lots of changes have happened since then—especially when you take into consideration this ’99 Ford F-250 is actually his eighth truck! When the search began for his latest ride, Brinton heard of an older gentleman in Aiken, South Carolina, who owned an F-250 and was looking to downsize. Brinton had an ’01 F-150 at the time and luck was with him. It didn’t take long before the two men agreed and the swap was made. “I thought it was the greatest thing in the world to finally have my first F-250 diesel at 16. After that, I worked hard to save enough money to upgrade the truck and, five years later, I finally have it how I like it.” 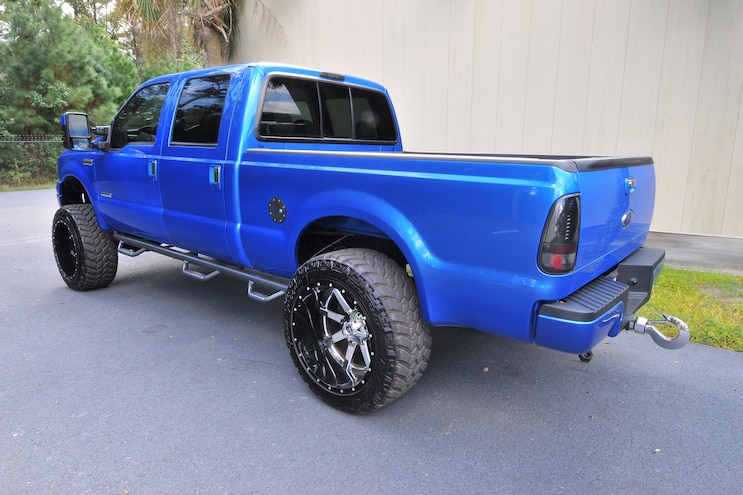 View Photo Gallery | 39 Photos
Photo 2/39   |   011 1999 Ford F250 Brinton Roberts
The new Ford was used as a work truck for a while, but everything changed when Brinton attended his first truck show. The collection of cool custom trucks motivated him to build his own full-blown show truck. Originally, the Ford was low to the ground—and that had to change. Since his dad, Clinton Roberts, is a full-time diesel mechanic and the family has a well-equipped shop behind their home, Brinton and his father were able to accomplish the work themselves. Suspension work was first, with the goal being to create the “bulldog” look (looking mean going down the road, riding a little taller up front and lower in the rear). They added a 6.5-inch Pro Comp lift kit up front and 3-inch blocks in the rear. A Pro Comp steering stabilizer, shocks, leaf springs, and drop-down pitman arm made it handle, while the 24x14 Fuel Maverick wheels and Nitto 38x13.50R24 Nitto Trail Grapplers got it rolling. The choice of wheels was important in making sure the gap between the wheels and fenderwells was minimized. With the current package, only a small amount of trimming of the front bumper and fender was required to make everything fit nicely with no rubbing.
Bigger wheels and the extra weight from the planned stereo system meant an increase in power was necessary. Under the hood, the 7.3L Power Stroke diesel engine benefits from a Banks Edge programmer set on Extreme, an S&B cold-air intake, a faster spooling Wicked Turbo wheel for more power and that satisfying whistle, and a 5-inch MBRP exhaust system from the turbo back. A new set of 3.73 Yukon gears multiplied the power. 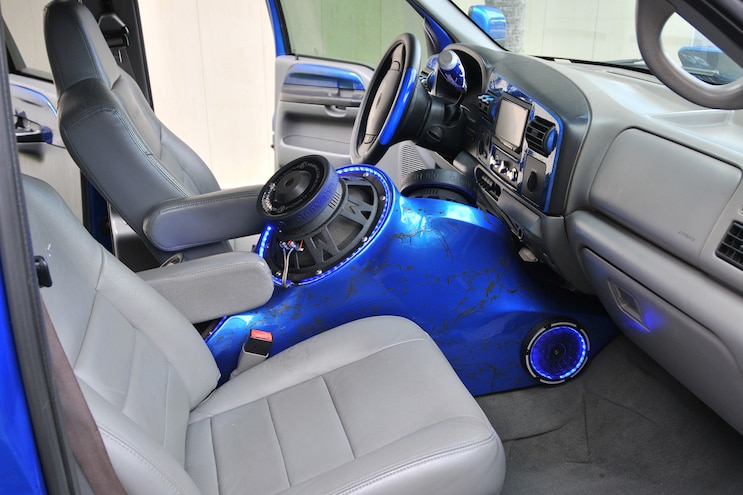 View Photo Gallery | 39 Photos
Photo 3/39   |   018 1999 Ford F250 Brinton Roberts
When it came time to modify the exterior, the second lucky break came thanks to the family salvage yard. It gave Brinton the opportunity to make several upgrades, beginning with a wrecked ’05 that donated its front end and bumper. New side mirrors, a new rear bumper, and a new tailgate came from a totaled ’08 truck. The aftermarket came to the rescue with several more changes, beginning with a Cervini 4-inch cowl induction hood, RBP mesh grille, and a cool lighting package that includes a 20-inch SeaToughLED lightbar, Recon smoked taillights, and OEM Harley-Davidson edition headlights. Even the doors were fitted with newer-style F-Series Platinum door handles. It was also time for a color change. The all-red paintjob was resprayed by Brinton’s good friend and fellow fireman William Shouse from Sheldon, South Carolina. They took the truck completely apart and sprayed a custom mix that began as a dark metallic blue, modified with blue pearl and white pearl that Brinton calls Bud Light Blue. It was William’s first full-vehicle paintjob, and it came out beautifully. 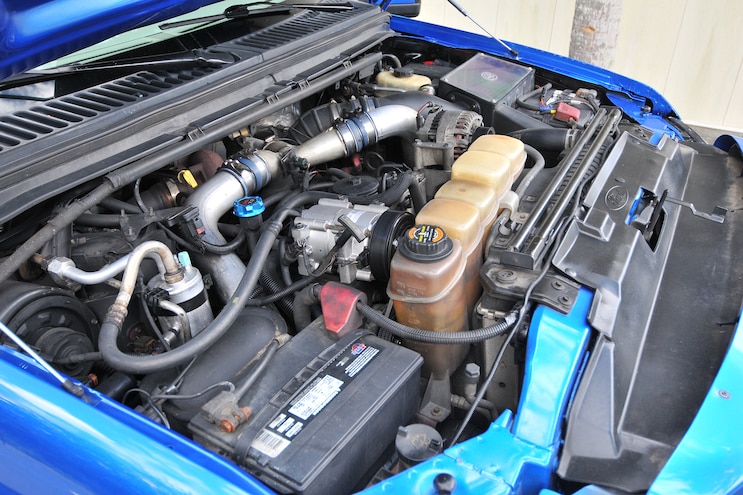 View Photo Gallery | 39 Photos
Photo 4/39   |   031 1999 Ford F250 Brinton Roberts
Moving inside, the truck was updated with a new dash from an ’05, along with an ’07 Lariat seat conversion, which added an air of elegance. Cool trucks always need a cool sound system, and thanks to some help from the team at Sutcliffe Audio in Port Royal, South Carolina, the F-250 is a rolling sound studio. The Kenwood in-dash receiver controls the power from a pair of 1,000-watt Memphis Car Audio amplifiers and a single 500-watt Memphis amp, sending signal to 14 Memphis speakers. The mix begins with a fiberglass sub enclosure between the front seats that holds three downward-firing, 12-inch Memphis subs as well as a pair of 6.5-inch Memphis component sets, all wrapped with blue LEDs. Three more subs were mounted behind the fold-down back seat, augmented with four 6x9 door speakers and tweeters in the dash. The amps underneath the rear seat are in a custom box sporting the Ford logo and are painted to match the truck with spatter paint accents. 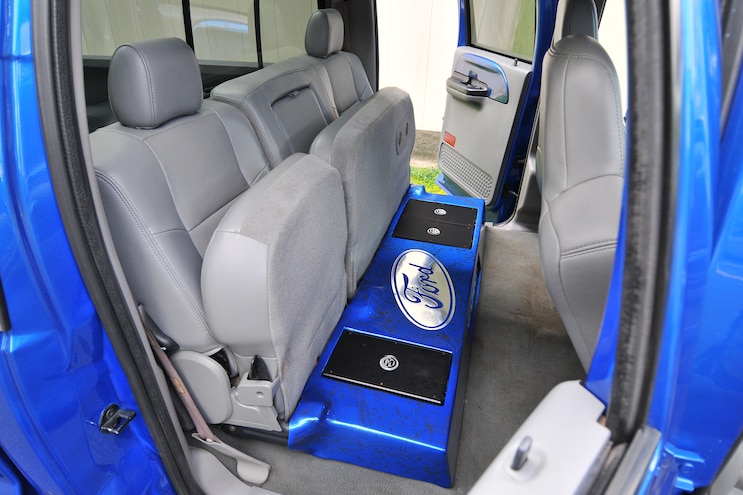 View Photo Gallery | 39 Photos
Photo 5/39   |   022 1999 Ford F250 Brinton Roberts
Although the completed truck is great fun to drive and a successful competitor on the show circuit, it’s far from finished. Future plans call for rebuilding the engine and transmission for extra power, and adding more lift, bigger wheels, additional lights, and an even more elaborate audiovisual system. Brinton sums it up by saying, “To be honest, when I built this truck I never thought I would win anything at a truck show, and I never thought I would be in a magazine. This is a dream come true!” All we can say is, the harder you work, the luckier you get!