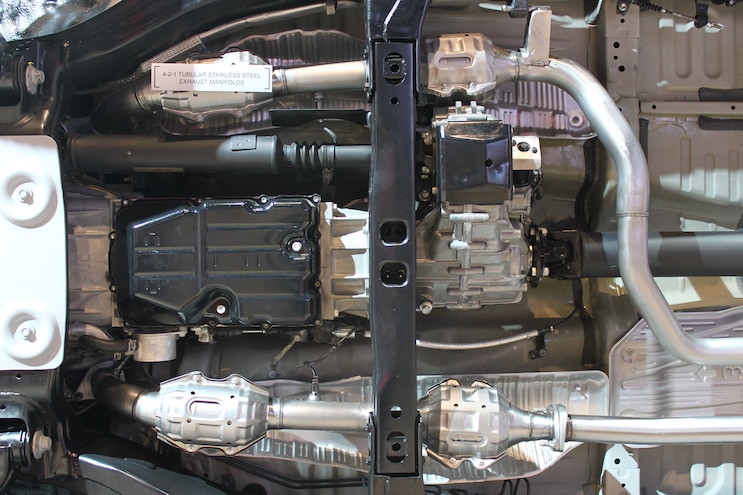 Catalytic converter thefts have been on the rise for years with thieves making off with thousands of dollars worth of goods quickly and easily from unsuspecting truck owners. While third-party manufactures have created a host of prevention items like alarms and cages, Toyota engineers seem to have found the ultimate solution on the new 2016 Tacoma. Thieves are going to be sorely disappointed.
What is this new theft prevention idea? Toyota engineers figured out how to integrate the exhaust manifold into the cylinder head. While this doesn’t seem like much, it has the added benefit of bringing the catalytic converter inside the engine bay from under the truck.
In fact, this new placement for the converter has been mostly overlooked so far. We discovered it thanks to a comment from Toyota Tundra and Tacoma Chief Engineer Mike Sweers while at an off-road driving event. The comment, made in passing really, grabbed our attention for sure since every day we seem to hear of another rash of catalytic converter thefts.
The catalytic converters on the 2016 Toyota Tacoma are mounted close to the engine, in the engine bay, as opposed to under the truck. This makes it much harder for would be thieves to steal them.
At the 2016 Chicago Auto Show, we were able to talk with Sweers specifically about this new design.
“When we started talking about integrating the exhaust manifold into the head, I wasn’t sure we could do it,” Sweers said. “Then, we did it and it all fits.”
“There was concern about the amount of heat coming off the exhaust manifold and that is why it is wrapped in the heat shield. Putting it all together makes it really hard for a thief to get in there and cut it off.”
“It’s a simple thing, but it is a huge part of QDR (quality, reliability and dependability). It is a huge part of if this customer is still happy with this truck 10 years from now. Does it help with his total cost of ownership? I have to prove to our board all the time it does and these little things make a difference.”
On the previous generation Tacoma, along with most pickups, the converters were mounted aft of the exhausts ‘Y’ pipe, along the frame rail. Some years were even bolted on, instead of welded, making the bad guy’s job even easier.
It may be a little thing, but to a truck owner who is out a few hundred dollars thanks to a thief, we think it is a big deal.