7th Time is the Charm 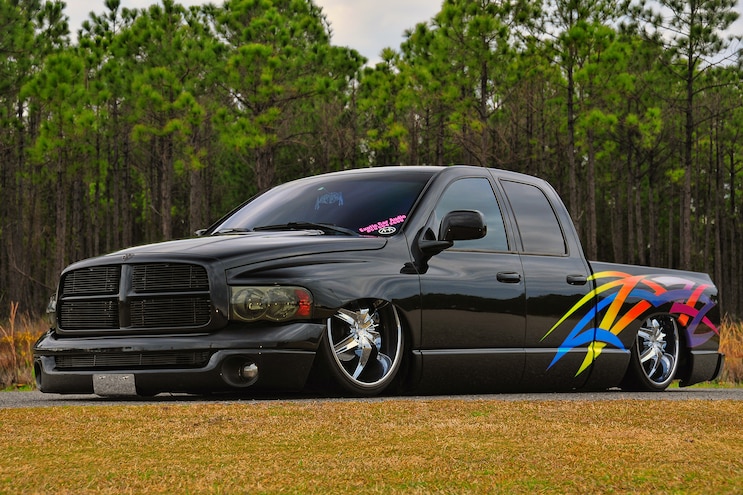 The act of truck ownership is a fairly simple equation. A need arises for a slightly used truck, so Craigslist gets scoured, and ownership gets passed from one person to another. But with some trucks, the experience and memories developed burrow so deep within the owner’s brain that the truck becomes more than just paint and metal, it becomes a part of their soul.
Such was the case with this ’03 Dodge Ram 1500 and owner Eli Barnes, who originally purchased it with more than 30,000 miles with the intent of using it a daily driver. Barnes immediately brought the truck to Ekstensive Metal Works, in Houston, Texas, to be bagged and body dropped, just to make it a little more fun to drive around. Then Barnes decided he had enough of the truck and sold it. Then, he bought it back some time later and redid the paint. Then, he sold it and bought it back at least five more times, giving the truck a total of seven completely different lives. By that time, it had too many memories and had too much of his soul. Every time it came back to him, he felt like he was reuniting with an old friend. 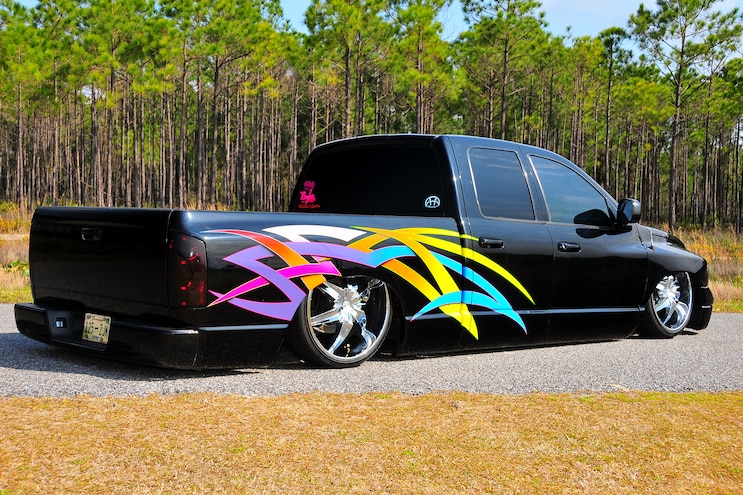 View Photo Gallery | 10 Photos
Photo 2/10   |   02 2003 Dodge Ram 1500
During one of its lifetimes, Barnes was driving the truck back from a show in Atlanta, where it had drawn a significant amount of attention. So much so, a group of unfriendly gentlemen decided they wanted to own the truck, but instead of offering cash, they tried to use a series of .45-caliber bullets. They shot holes in the tailgate, behind the passenger side rear wheel that ricocheted off the fuel cell, behind the bed lip, and one skirted the bottom edge of the passenger doorframe to lodge in the frame. Barnes got away unhurt, and although the attack happened after these photos were taken, the Ram still bears the scars of that attack to this day.
The crew over at Ekstensive Metal Works built this truck to be bullet-proof (see above) starting with building a 3/4 frame for added support, cut in a custom bridge notch, and fully boxed it for added stiffness. It’s so solid Barnes regularly cruises it at 80mph down the highway at 1-inch off the asphalt. In fact, it was so well built it was a daily, ticking off more than 130,000 miles on the odometer. It only saw a trailer about 10 times in its life, as it was driven to shows, to work, and many multi-state journeys back and forth between owners. Helping to swallow up all of the bumps in the road are Slam Specialties 2600s in the front and 2700s in the rear, which are fed through 1/2-inch lines, AccuAir valves, and Viair compressors. 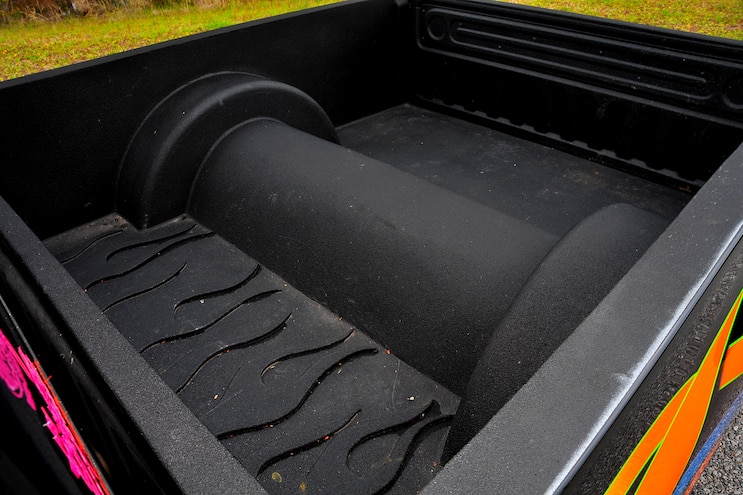 View Photo Gallery | 10 Photos
Photo 3/10   |   04 2003 Dodge Ram 1500
The exterior has seen so much of the open road. It proudly wears its battle wounds alongside a 3-inch body drop, full sheet metal bed, shaved and relocated gas filler door, smoothed door handles, rearview mirrors, and cowl panel. The color scheme was developed by Mike Hathaway from Hathaway Designs in Pensacola Florida, where Eli dropped off the Ram, threw him the keys, and said, “Surprise me!”
The interior was lovingly treated to an all-red makeover, starting with naugahyde pulled over ’09 Ram front seats, hook and loop carpeting, and a custom suede and vinyl headliner, which features a menacing double row of spikes going front to back, and a trio of custom LEDs. A Billet Specialties steering wheel also received a coating of red to match just about everything else. Mr. Stiches in Mary Esther, Florida, took care of all the interior work. Tunes were owner-installed and consist of an Alpine IXAZ-W404 head unit, Kicker subs under the seat, and components in the doors, with a duo of Pro Bass amps. 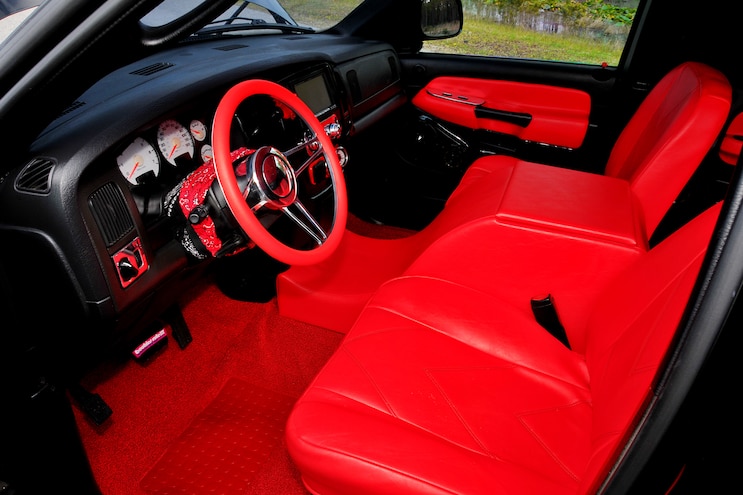 Truckin
Truckin
This 2000 Dodge Ram is Ahead of the Curve
This ’00 Dodge is one of the first of its kind, it still holds up even now.
Anthony Soos – Sep 12, 2016
8-Lug
8-Lug
10 Advantages of Manuals: Letters to the Editors
Letters to the Editor: Readers gives their feedback about manual transmissions in pickup trucks, inc...
Monica Gonderman – Jan 23, 2016
Truckin
Truckin
A quick change of plans makes this 2006 Dodge Ram 1500 into a stunner
A 2006 Dodge Ram 1500 gets transformed into an eye-popping show truck tha...
Anthony Soos – Oct 31, 2015
Truckin
Truckin
2006 Dodge Ram Tailgate Combo Skin - Combo Pack
A reskinning process that will forever change the look of the back side of this Dodge Ram truck.
Marcel Venable – Sep 28, 2015
Join Our FREE Truck Trend Network Newsletter