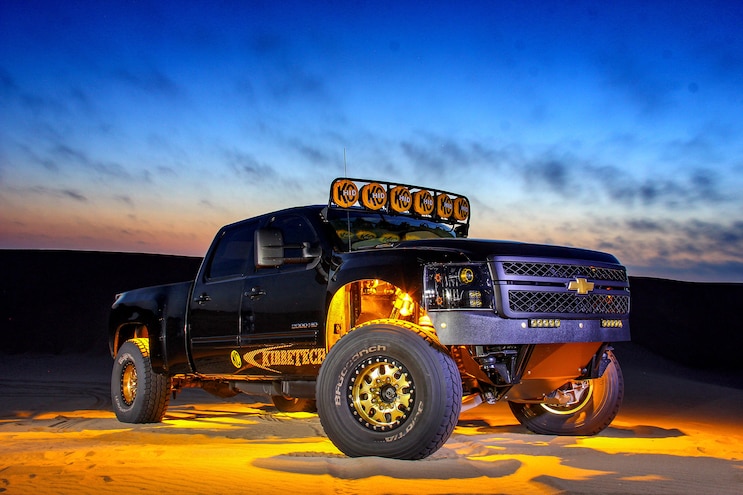 Rick DeWeese and his wife love to spend time at their local sand dunes. After owning a number of different off-road cars, prerunner trucks and side-by-sides over the years, they decided to build a vehicle that could do it all. A truck that can be used to play in the sand and tow their trailer, too. They decided that the ’11 Chevrolet 2500HD Duramax that was sitting in the driveway could meet their needs. However, the Chevy wasn’t quite up to par; the truck’s suspension and 6.6L Duramax LML engine didn’t meet Rick’s needs. So, to get the truck to perform like he wanted, Rick sought the assistance of Ryan Kibbe at Kibbetech Offroad Fabrication & Design in Newbury Park, California. Ryan and his crew went to work and built an amazing truck that performs as good as it looks.
Let’s be honest: A big, heavy, diesel-powered ¾-ton pickup truck is not the first thing that comes to mind for blasting over the sand dunes. Getting this truck to really work well wouldn’t come from a bolt-on suspension system, so the team at Kibbetech had to start from scratch. View Photo Gallery | 27 Photos
Photo 2/27   |   012 2011 Chevrolet Silverado 2500HD Prerunner
The first thing that needed to be done was to make room for the suspension and massive 37-inch BFGoodrich tires. Removing all of the stock fenders and fender wells did this. With those pieces gone, the ECU, fuse box and Optima batteries all had to be relocated. The two cells were moved to the bed of the truck, while the computer and fuses are now repositioned in the engine compartment.
Getting as much wheel travel as possible out of a four-wheel drive front end is not a simple task. To achieve a desired 16 inches, Kibbetech machined longer upper A-arms from billet aluminum to keep them light and strong. Then lower A-arms were fabricated from chrome-moly plate and internally gusseted for extra strength. To ensure the arms cycle completely through the travel events, new uprights (spindles) were also fabricated. The original stock hubs and CV joints are retained, but custom-length axle shafts, 1 ½-inch uniballs and heim joints are used to accommodate the longer A-arms and allow the front end to move properly.
The added stress of using long travel suspension called for the frame and lower pivot points to be reinforced. This was done with 1/8-inch chrome-moly plate. To further strengthen the front end, a chrome-moly front bumper ties the lower cross member, frame horns and skid plate together. 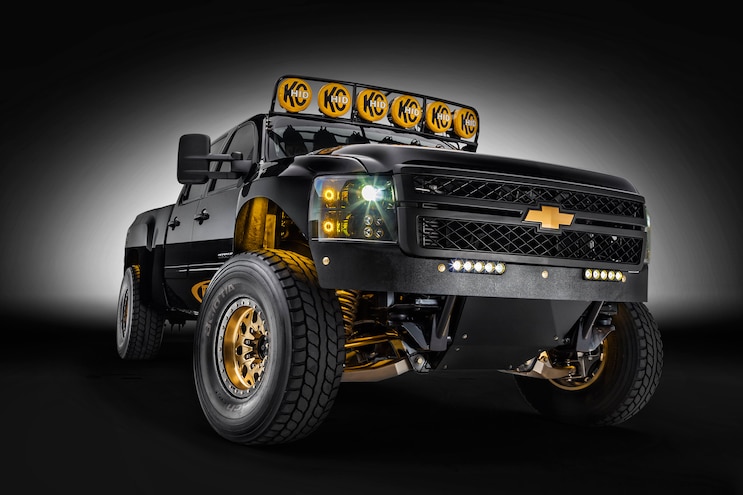 View Photo Gallery | 27 Photos
Photo 3/27   |   021 2011 Chevrolet Silverado 2500HD Prerunner
Handling the front end’s weight and suspension travel is tasked to a pair King Shocks 3.0-inch Race Series coilovers, which feature 700-pound coil springs. The shocks come with compression adjusters that are used for making minor changes to the suspension. The shock of hard landings is absorbed by King 2.5-inch bump stops. Since the truck’s front end was not originally designed for coilovers, a bolt-in engine cage is used and helps brace the front end.
With the increased and added width, the stock steering system had to be redone. New, longer steering rods were built using FK Bearings rod ends with high-misalignment inserts to make sure no binding occurs. The additional steering travel caused the tie rods to hit the radiator’s fill and recovery tanks on full compression, so new tanks were built out of aluminum for proper clearance.
For the rear suspension, a pair of custom leaf packs and shackles provide the proper ride height and 16 inches of wheel travel. The leaf springs are installed in the original spring-over-axle configuration. A pair of King Shocks 3.5-inch Race Series external bypass shocks and 2.5-inch bump stops control the rear suspension movement. The size of the shocks requires them to be routed through the bed and attached to the bed cage. 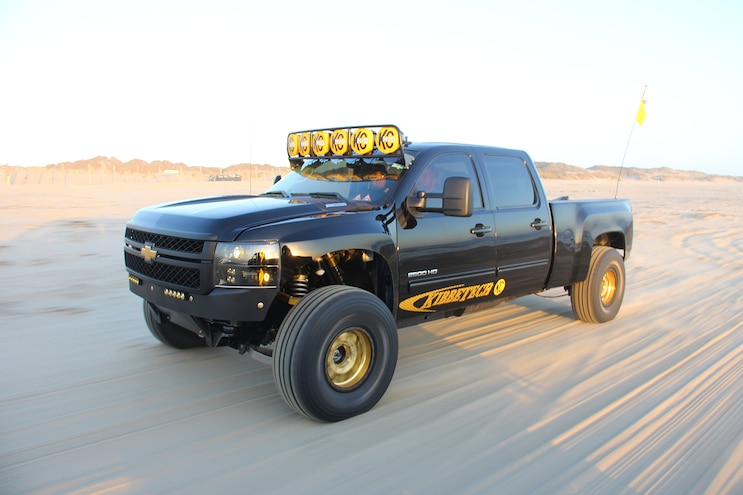 View Photo Gallery | 27 Photos
Photo 4/27   |   023 2011 Chevrolet Silverado 2500HD Prerunner
The bed cage is not only an upper shock mount, it also bolsters the frame, carries two fullsize spare tires, and has two CBR Performance fluid coolers (transmission and engine oil) attached. Spare tires are positioned for ease of access and weight distribution.
With the big Chevy’s suspension completed, attention turned to the engine. In order to play in the sand, the Duramax LML powerplant needed a boost. And to give the engine that extra oomph, Proformance Diesel of Bakersfield, California, installed a Danville Performance 68mm turbocharger and downpipe that feeds into a 4-inch MBRP exhaust and muffler system. Fresh, cool air flows through a Kibbetech-built intake system with a K&N filter. The stock intercooler is retained, but airflow is improved with Screamin’ Diesel Performance’s cold and hot-side intercooler pipes with Y bridge. Fuel needs are taken care of with a FASS 150 lift pump and filter that feed the stock injection pump and injectors. Maximizing engine potential is done through a PPEI Power Performance programmer with EFILive tuning by LA Tuning. Engine status is monitored with an Edge Products touch screen CTS. All of this allows the engine to make 650 hp with 1,150 lb-ft of torque.
The stock Allison six-speed automatic transmission could not handle the abuse of the added power and large tires. Chavis Fryer was given the job of rebuilding the gearbox, using SunCoast Diesel Transmission’s internals for strength and a SunCoast torque converter to guarantee power transfers from the engine to the wheels. 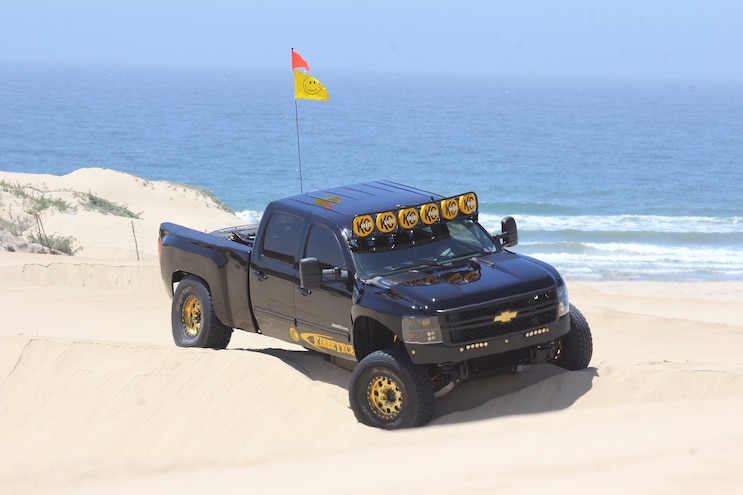 View Photo Gallery | 27 Photos
Photo 5/27   |   025 2011 Chevrolet Silverado 2500HD Prerunner
Lights definitely keep the fun going after dark, so an array of KC HiLites is used throughout the truck. Headlining the set are six 70-watt Carbon Fiber HID Pods mounted above the windshield to a Kibbetech radius light rack, that’s tied into the cab’s A-pillars. For additional illumination, two 10-inch LED Flex-Series lights were installed in the front valance.
Factory headlights are only so good. So, in order to have better vision on and off road, Ecotintshop designed and built a set of KC headlights that use two 4-inch Flex Series spot- and flood lights, to allow for low and high beam. This combination makes the headlights brighter than most 50-inch light bars.
Amber KC Cyclones are also used as marker/turn signals. To make sure the truck can be seen while kicking up dust, two of KC’s amber 3-inch, C-Series cubes are used out back. Two more clear C3 floodlights are installed on the rear of the bed cage as back up lights. Eight Cyclones are mounted in the trucks wheel wells and two in the bed. 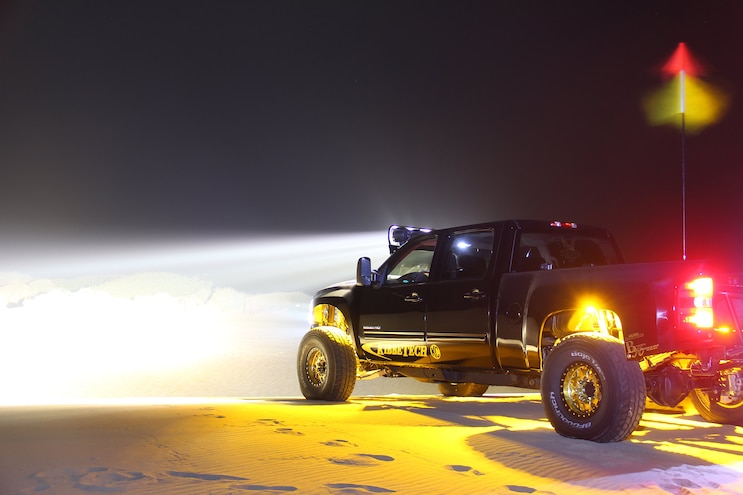 View Photo Gallery | 27 Photos
Photo 6/27   |   027 2011 Chevrolet Silverado 2500HD Prerunner
Rick had Shinesupply paint all the panels to match the cab. Then, to help ward off damage and give it the wet look, the truck was sprayed with CQuartz Products paint protectant. The entire bed was coated with Line X, inside and out, as well as on the back of the fiberglass fenders, to protect and give those areas nice black finishes. To contrast the truck’s color, gold anodizing was used. The King shocks and bump stops, which are normally anodized blue, were disassembled and refinished in gold. The upper A-arms, steering rods, body washers, cup holders and wheels are also anodized gold.
The interior provides a comfortable ride both on the road and in the dirt. The custom Beard Torque seats were done with a suede and leather combination that’s diamond stitched. All four seats are heated, and the factory power adjustment feature is still functional for the front seats. An Apple CarPlay Bluetooth , touchscreen head unit provides music and displays iPhone functions. The tunes come through loud and clear with Focal Pro Audio speakers in the doors and dash and two 10 inch Rockford Fosgate subs mounted in a waterfall style center console. Powering all the speakers are two Rockford Fosgate Punch amplifiers.
Never one to settle, after the photos were shot, Rick had Fiberwerx build a new set of carbon fiber fenders for the front and rear. He also wanted the rear suspension to perform better, so Atlas Leaf Spring was commissioned to build a pair of leaf springs that are positioned below the axle (axle over spring), which eliminates axle wrap, and increases wheel travel. 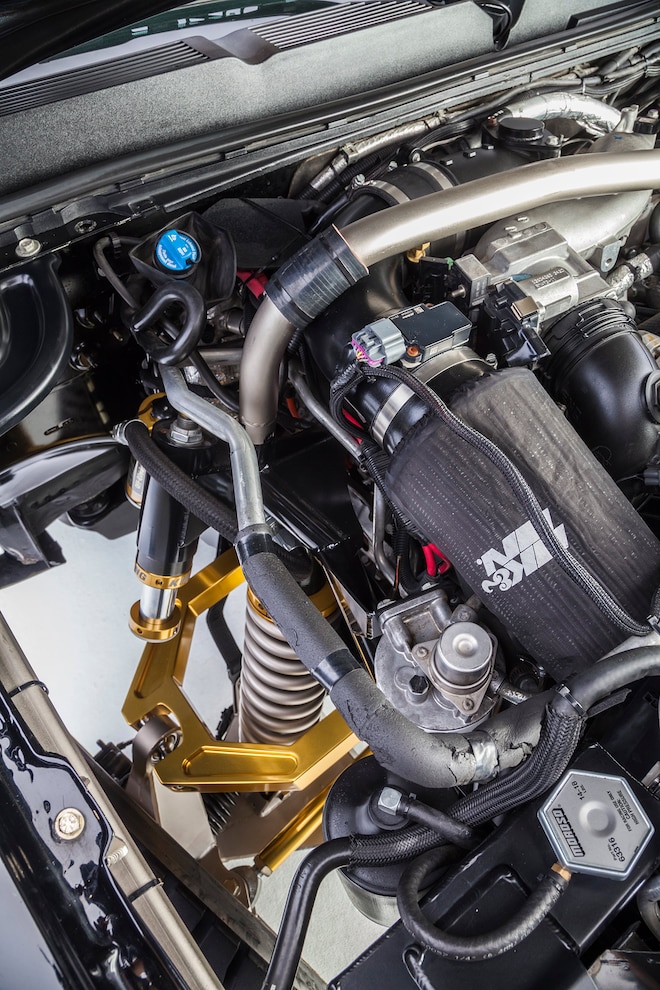 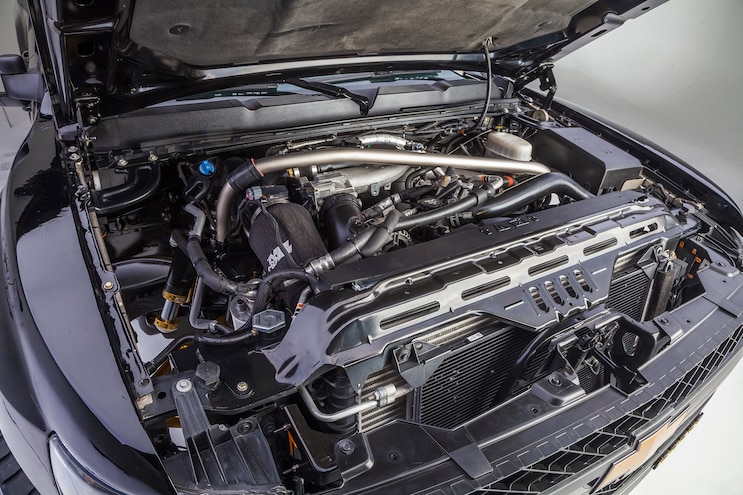 View Photo Gallery | 27 Photos
Photo 8/27   |   002 2011 Chevrolet Silverado 2500HD Prerunner
Boost for the 6.6L Duramax LML engine in Rick DeWeese’s ’11 Chevrolet Silverado 2500HD is generated by a 68mm Dansville Performance turbocharger. Helping the engine breathe and make 650 hp and 1,050 ft-lbs of torque, is a custom Kibbetech Offroad Fabrication & Design cold-air intake (with a K&N filter), and a Dansville down pipe that feeds into a 4-inch MBRP exhaust system. The stock intercooler is retained, but is helped by Screamin Diesel Performance’s “Twins” cold-side and hot-side intercooler pipes and Y bridge. The engine’s potential is maximized with EFILive calibrations by LA Tuning and a FASS 150-gph lift pump.
KC HiLites are used extensively on the Chevy. Six 70-watt HID Pods are mounted above the windshield to light the trail. The use of KC lights continues with the Ecotintshop-built headlights, which use two 4-inch Flex Series spot- and flood lights in each assembly. There are also two 10-inch Flex Series LEDs in the valance, four C3 Series cubes in the rear, and Cyclone lights in the wheel wells and bed. 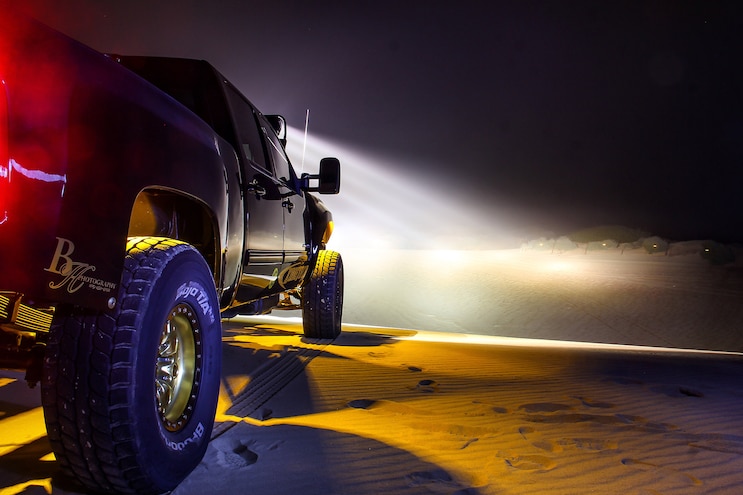 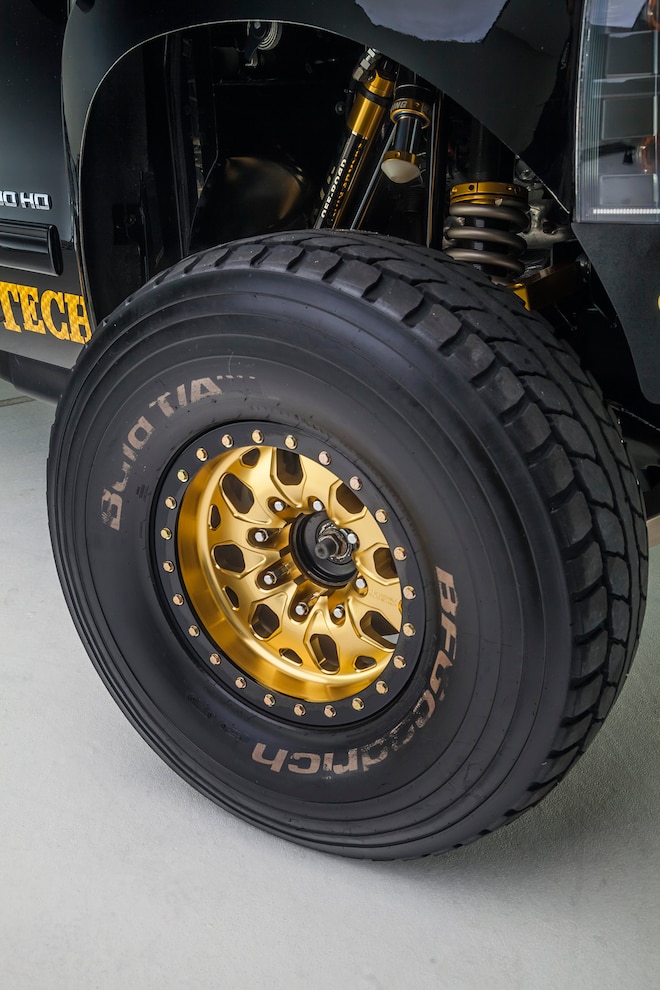 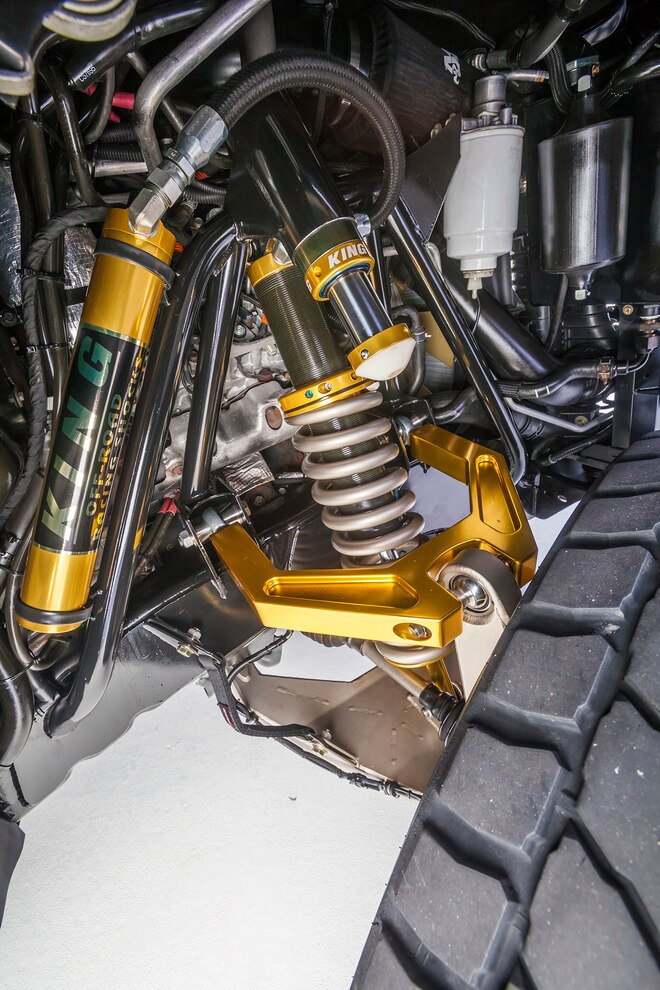 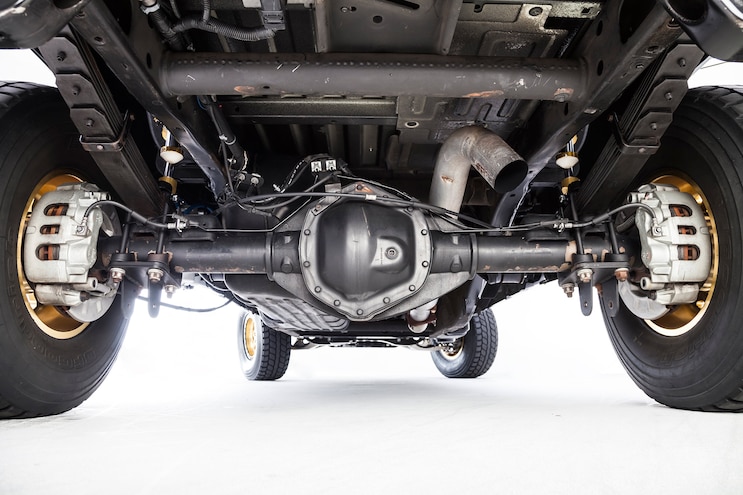 View Photo Gallery | 27 Photos
Photo 16/27   |   010 2011 Chevrolet Silverado 2500HD Prerunner
The stock rear axle and brakes remain in service. While the truck’s rear suspension is still leaf sprung, it uses a pair of custom spring packs and shackles to cycle 16 inches of travel. Two King Shocks 3.5-inch Race Series shocks and 2.5-inch bump stops control the suspension. Since the time when this photo was taken in 2015, the rear suspension was redone using new springs that go below the axle, to gain more travel and a smoother ride. 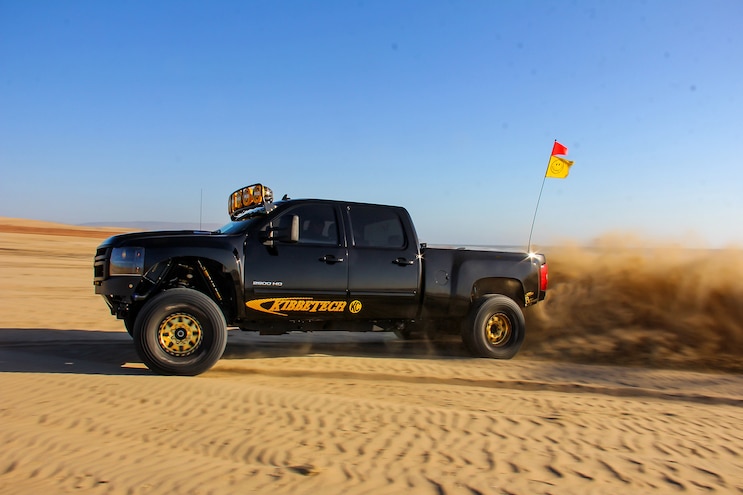 View Photo Gallery | 27 Photos
Photo 17/27   |   011 2011 Chevrolet Silverado 2500HD Prerunner
Rick puts 650 hp Duramax to work in the sand.
The primary function of the bed cage is providing an upper mounting point for the rear shocks. However, it also holds two spare tires, transmission and coolers, and a couple of amber KC HiLites C3 Series lights. Below the cooler are two red top Optima batteries mounted to the bed. 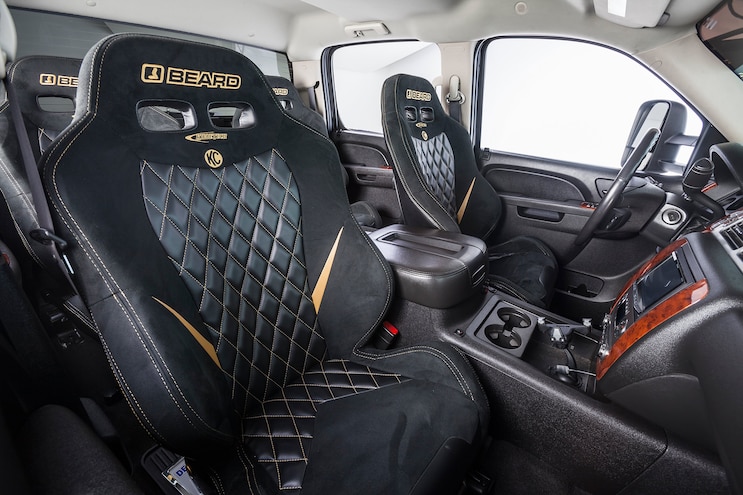 View Photo Gallery | 27 Photos
Photo 21/27   |   016 2011 Chevrolet Silverado 2500HD Prerunner
Beard Seats custom seats ensure the ride is comfortable. The front and rear cushions are covered with a combination of suede and diamond-stitched leather, with gold stitching, and they’re heated for those cold blasts in the dunes at nighttime. 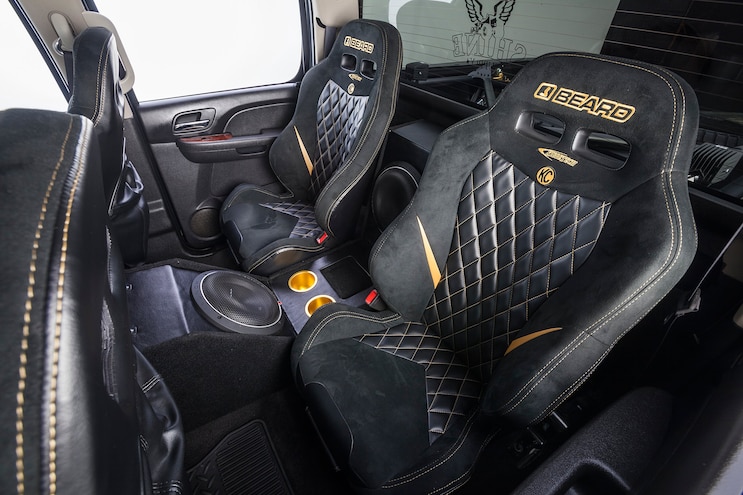 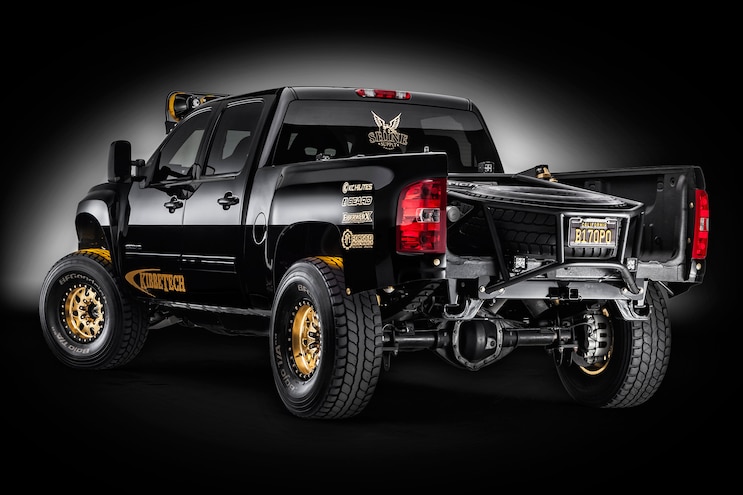 View Photo Gallery | 27 Photos
Photo 25/27   |   020 2011 Chevrolet Silverado 2500HD Prerunner
The rear of the frame is capped and supports a crossmember with a high-clearance hitch. The crossmember is also used as a rear mounting point for the bed cage.