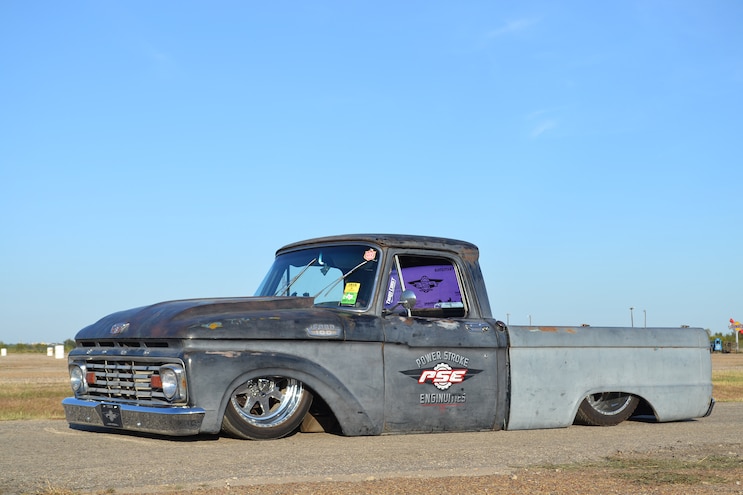 We always enjoy seeing truly different diesel-powered trucks, cars, and such. Dorian Reyna’s wild ’64 Ford F-100 is a rig that definitely falls in that category.
We’ve seen lowered trucks and cool engine swaps before, but Dorian has taken his to a level much higher than normal for modified classics. His F-100 has a full tube-chassis, custom front and rear suspension, and a 6.0L Ford Power Stroke engine on nitrous oxide, so we were eager to find out the story behind such a creative build.
“The truck sat for nearly two years in a San Diego neighborhood while I was stationed overseas,” Dorian says. “When I got back stateside to Houston, Texas, I learned the city had threatened to tow it away and crush it. So a buddy and I scraped up some dough and headed to California to pick it up.” 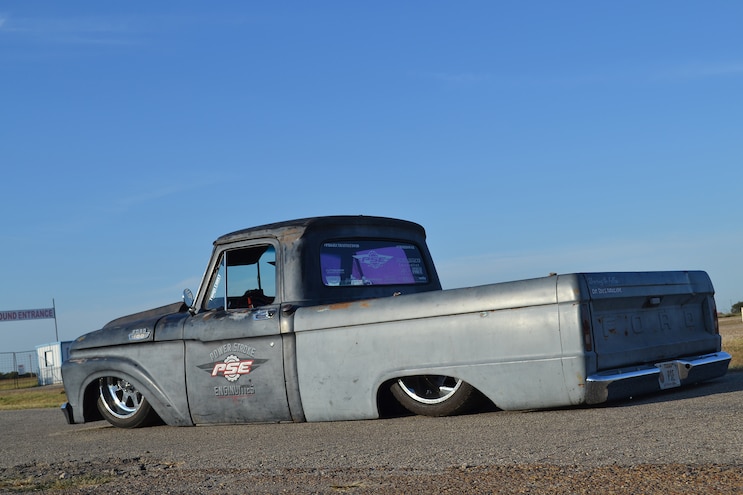 View Photo Gallery | 19 Photos
Photo 2/19   |   019 DSLP 160800 FORD Slammed Six Liter F100 Rear Three Quarter
Upon arriving in Texas, the truck continued to sit with a blown-up 390ci gas engine while Dorian started his own business, Power Stroke Enginuities. “I met a lot of awesome people in the Marine Corps, and a few of them really wanted to see me turn the old F-100 into something special,” Dorian says. After constant pestering from his buddies Sgt. Eric Farias and Sgt. Jeremy Arsiaga, Dorian finally got to work.
A project that started as a “let’s stick a Power Stroke in a classic” build snowballed into a custom, tube-chassis rig. “At first, I was just going to build something with big tires in back, like a traditional hot rod, but I received so much help from friends and fabrication shops that I decided to go all out,” Dorian says.
In this case, “all out” means the F-100’s original frame was scrapped, and a full square-tube chassis was built by Chassis Fab, in Pasadena, Texas. The frame presented some interesting issues, as the front rails have to be wide enough to facilitate installing the diesel engine yet narrow enough to incorporate long-travel A-arms and 275-series tires. The rear of the truck was no less of a challenge, as Dorian still wanted the same big-tire look he had initially planned. That means a custom four-link, extremely narrowed rear axle, and an airbagged rear suspension.
There’s more to the low-slung look than just a custom frame and suspension, however. The F-100’s transmission tunnel and firewall also had to be altered in order to clear the Ford 5R110 five-speed automatic transmission and to allow space for the 6.0L engine. Vertical height transitions were also an issue. So, to alleviate those problems, the hood has a 3-inch cowl scoop, and the oil pan is shortened 2 inches for times when the truck is lowered to the ground. 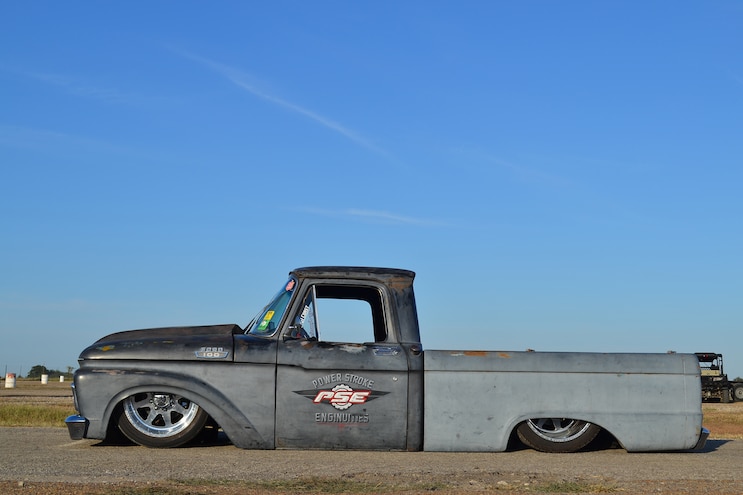 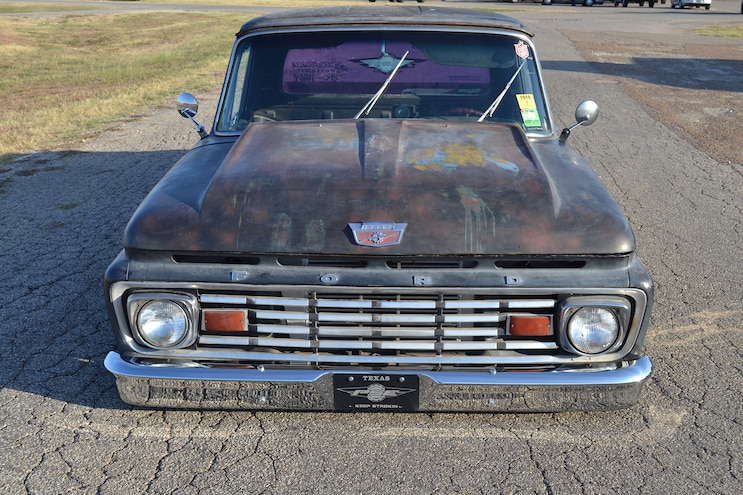 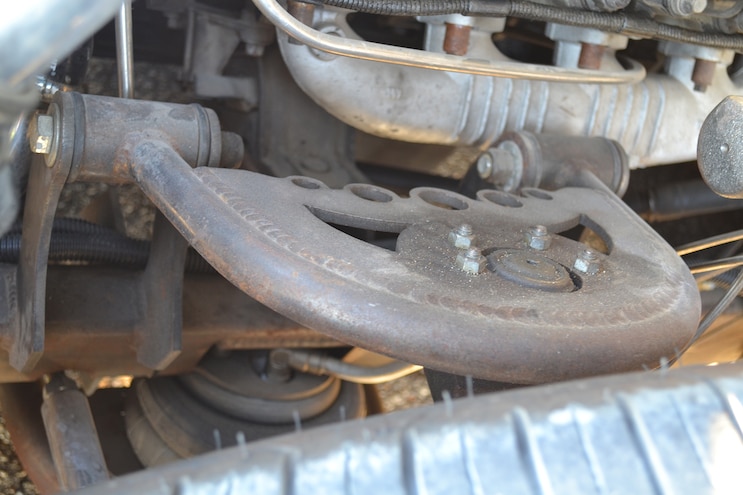 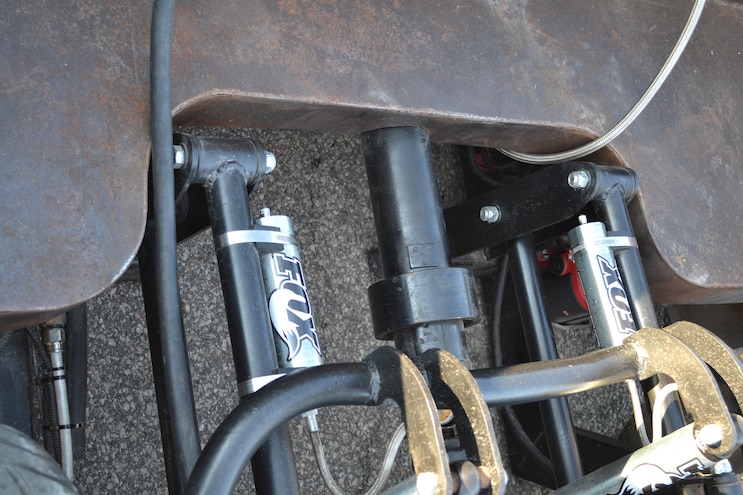 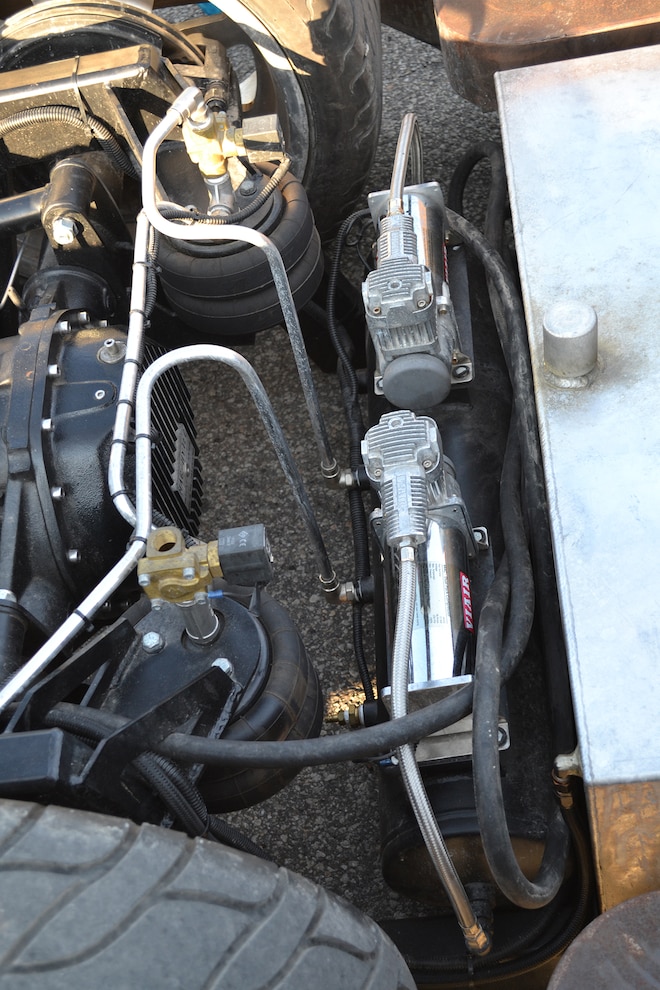 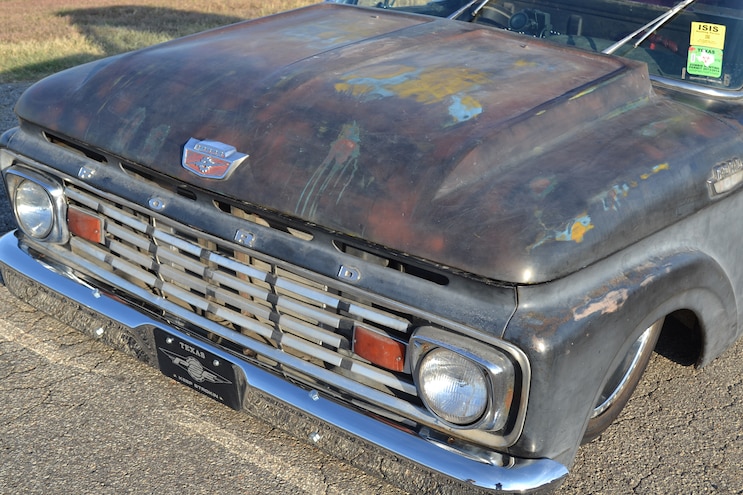 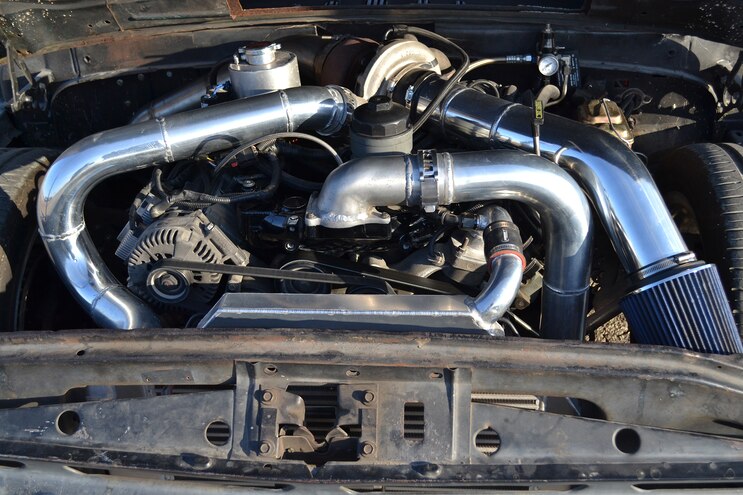 View Photo Gallery | 19 Photos
Photo 10/19   |   008 DSLP 160800 FORD Slammed Six Liter F100 Air Intake
A couple of bends from Speedlab Creations and an AFE air filter later, and Dorian’s truck has an air intake system. The filter is closer to the radiator to make room for the big front tires when the truck is dropped. 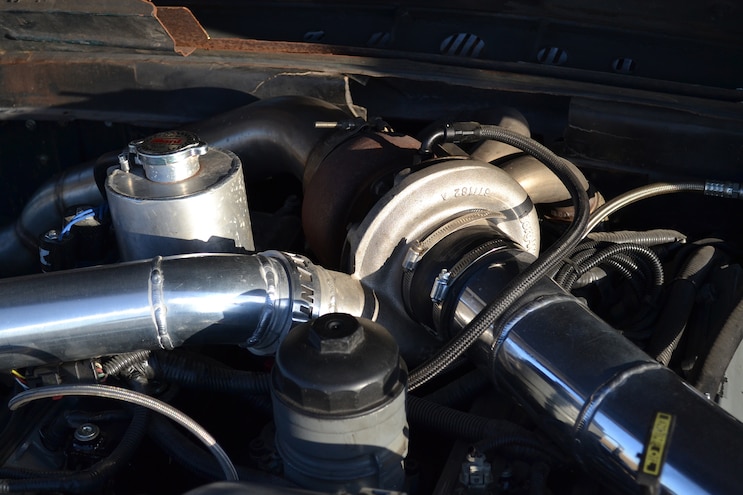 View Photo Gallery | 19 Photos
Photo 11/19   |   009 DSLP 160800 FORD Slammed Six Liter F100 Turbo
The factory variable-geometry turbo was ditched for a 66mm BorgWarner S300, mounted with a Cutting Edge Diesel swap kit. The compressor pushes 45 psi of boost into the engine and is responsible for the Power Stroke’s 650 hp (without nitrous). 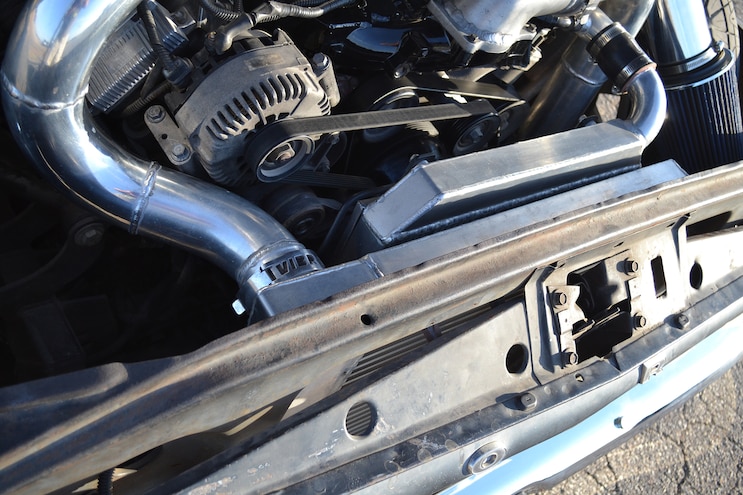 View Photo Gallery | 19 Photos
Photo 12/19   |   010 DSLP 160800 FORD Slammed Six Liter F100 Intercooler
In front, virtually everything had to be fabricated for the F-100. The radiator, intercooler, and all of the air intake piping was built by Jose Jimenez at Speedlab Creations. 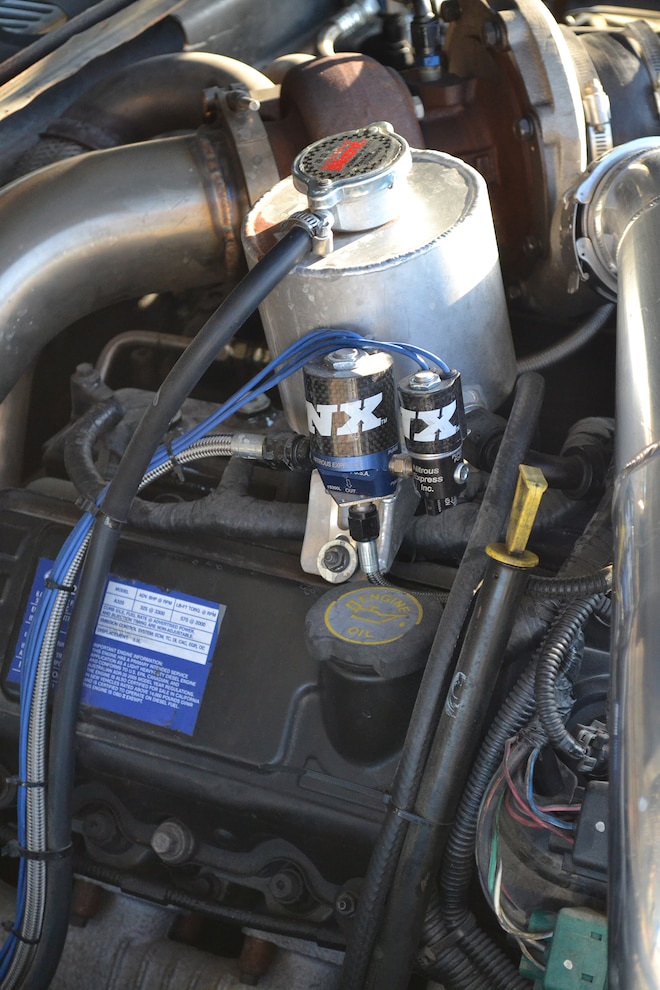 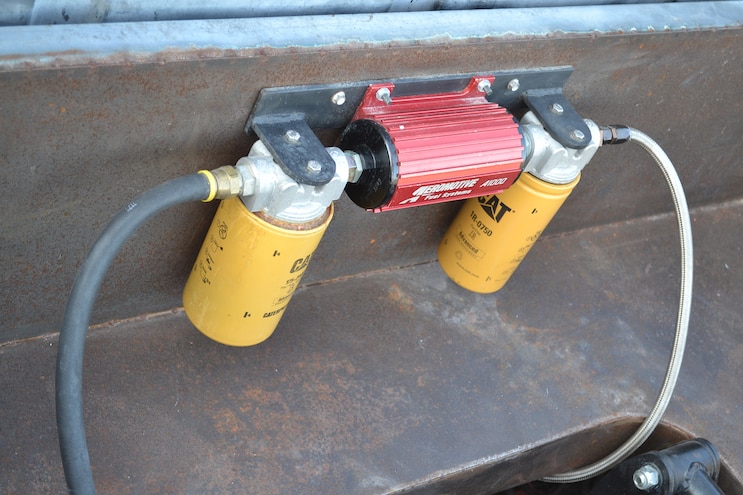 View Photo Gallery | 19 Photos
Photo 14/19   |   012 DSLP 160800 FORD Slammed Six Liter F100 Aeromotive Lift Pump
Since there’s no room to hang a filter assembly below the truck, an Aeromotive A1000 lift pump and CAT filters from Marty’s Diesel Performance hang from the cab, giving the outside of the truck a little color. 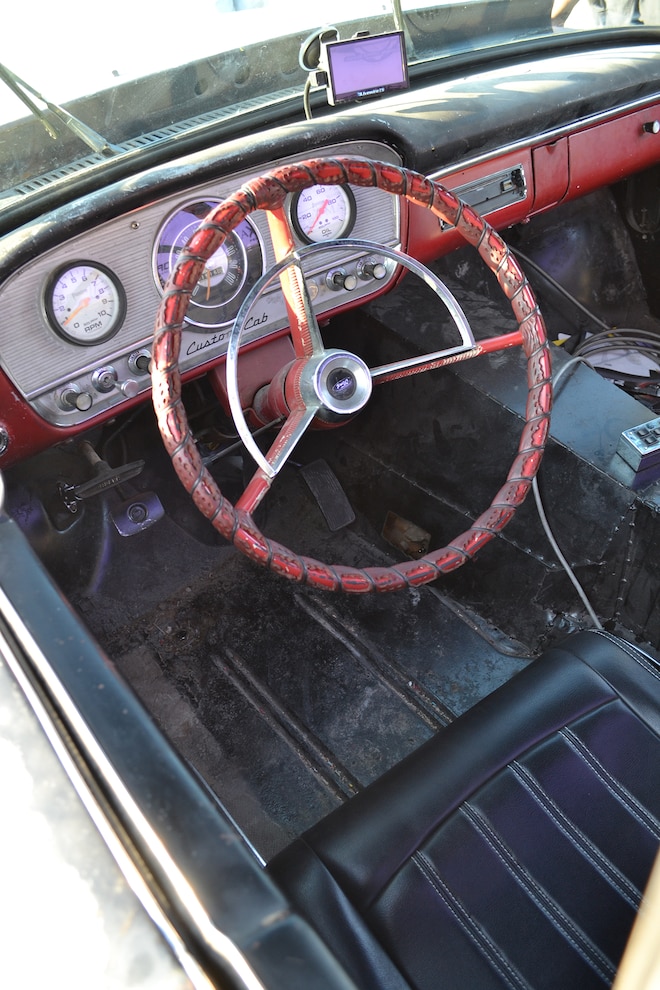 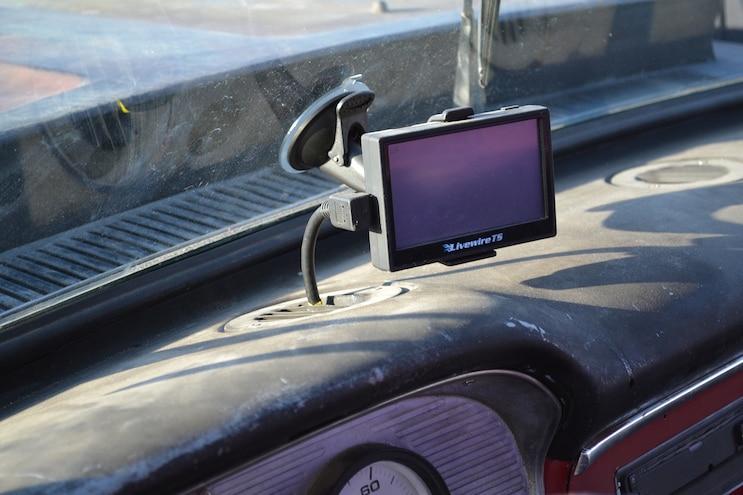 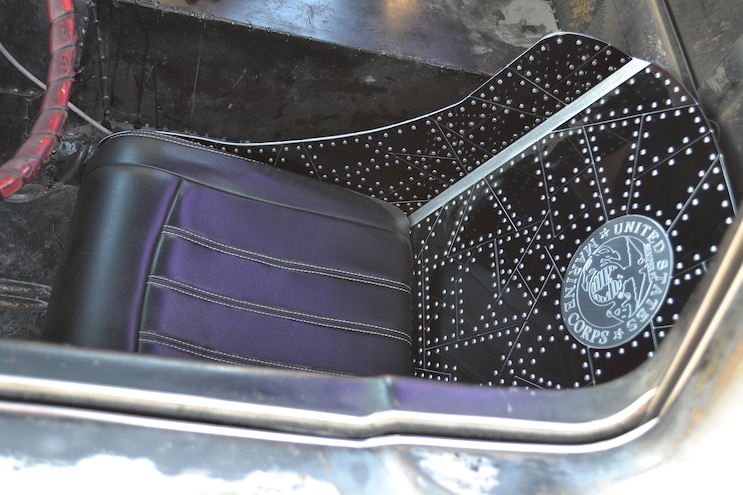 View Photo Gallery | 19 Photos
Photo 17/19   |   015 DSLP 160800 FORD Slammed Six Liter F100 Seat
Dorian gets a lot of questions about the seats in the truck. As a former U.S. Marine, he wanted to pay tribute to his friends, and he commissioned these custom seats to be designed and built by Ryan Alford at Sheetmetal Designs. 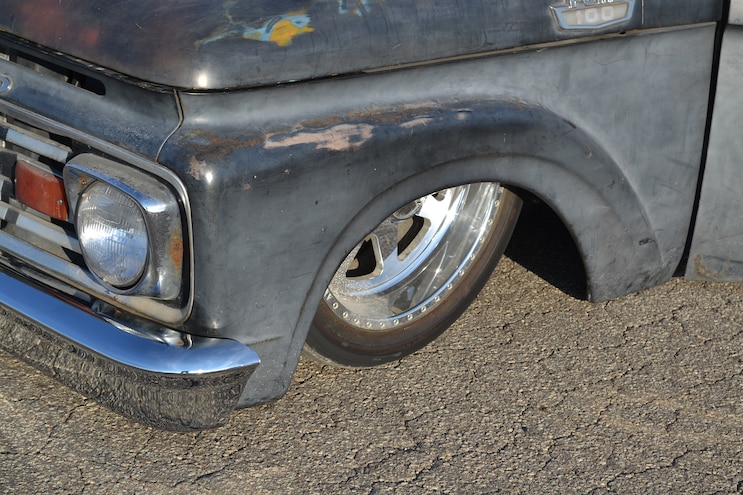 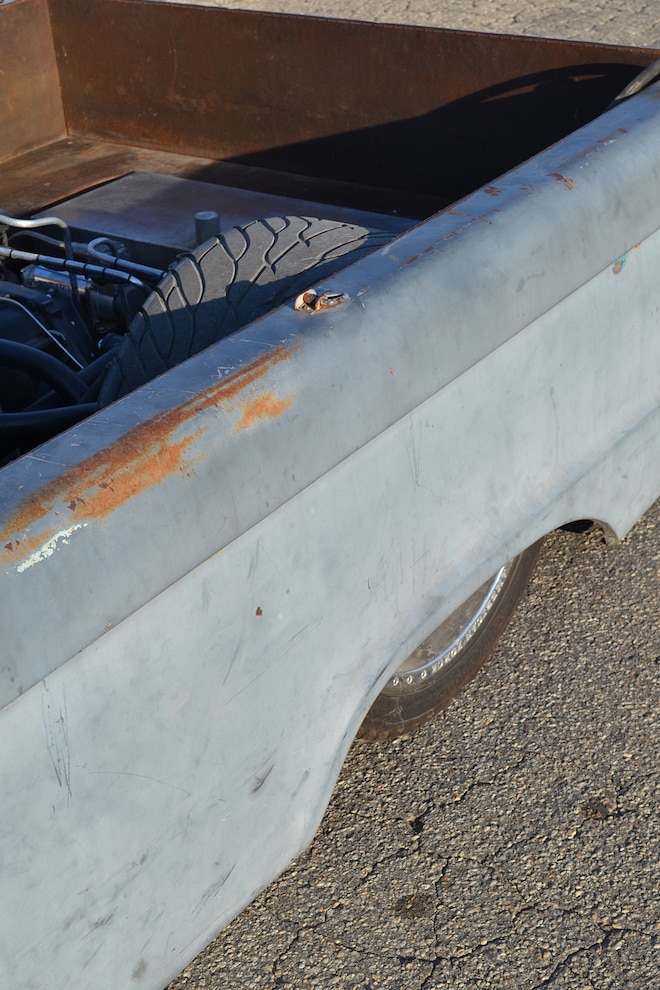