A Contemporary Performance Ram With a Flair for ’70s Nostalgia 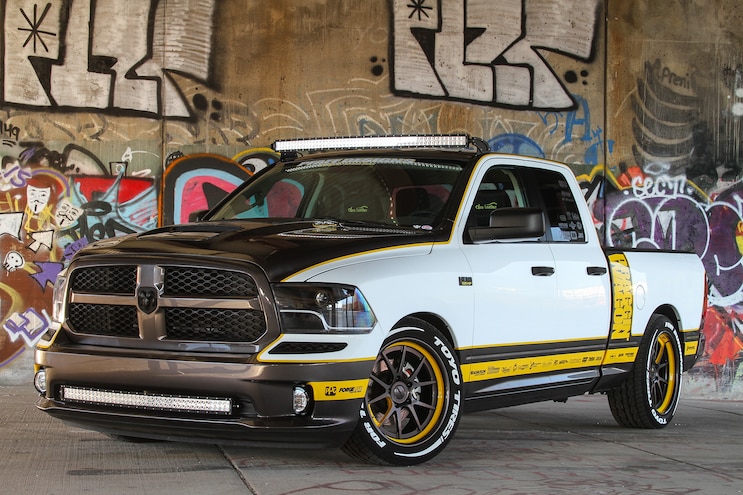 Inspiration is an elusive thing, but it never seems to be lacking with designer Murray Pfaff. Like an artist who sees a landscape on a blank canvas or a sculpture inside a block of marble, Pfaff has an innate ability to extract a masterpiece from the mundane. That was his challenge for turning a basic, Granite-colored Ram Express into a showstopper. As the next rung up the trim ladder from the fleet-oriented Tradesman model, the Express is Ram’s entry-level consumer truck. But it also offers the Hemi engine and Sure-Grip rear axle, essential ingredients for Pfaff creating his Mopar Draggin’ Wagon —a cooker as well as a looker.
“As much as I wanted it to be a sport truck in every sense of the term, I also planned to use it as a bona-fide shop truck,” Pfaff says. “Starting with the Ram Express was like starting with a blank canvas, because I was able to build up this stripped-down truck just as I wanted.” 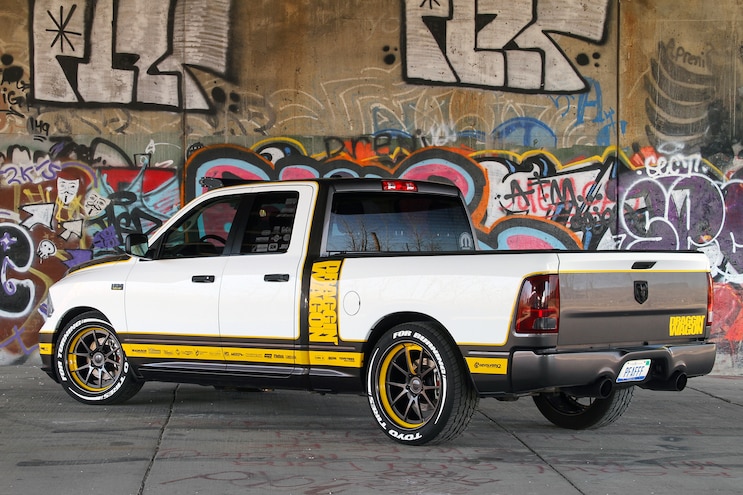 View Photo Gallery | 13 Photos
Photo 2/13   |   05 2014 Ram 1500 Express Draggin Wagon
That included adding a Magnuson supercharger system, lowering the suspension, re-trimming the cabin, and giving it a graphical makeover that would light up the hearts of Mopar fans from Chrysler’s old headquarters in Highland Park, Michigan and fans of the “Simon & Simon” bachelor pad in Venice Beach (from the ’80s TV series). Dodge’s Macho graphic packages, introduced the late ’70s, were the inspiration for that makeover, as Pfaff whimsically recast the iconic vertical graphics offered on the ’79-’80 models.
“Those graphics from the ’70s were etched in my brain when I was young, and now, almost 40 years later, they represent a time unlike any other,” Pfaff says. “Conveying that on the Draggin’ Wagon was a great way to bridge two eras.” 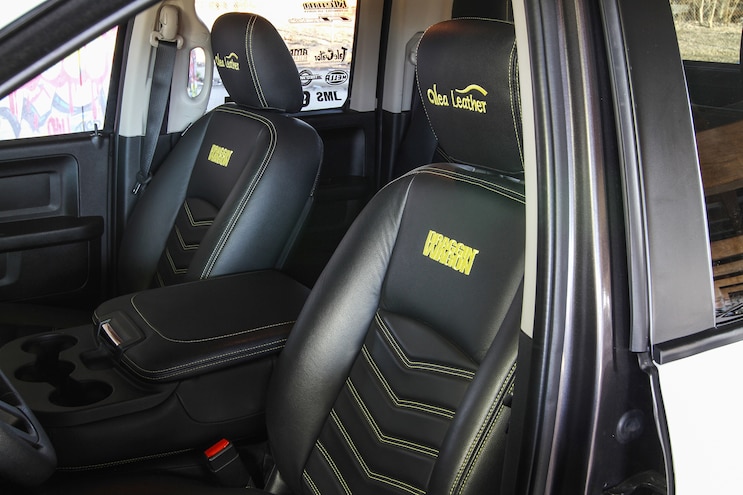 View Photo Gallery | 13 Photos
Photo 3/13   |   07 2014 Ram 1500 Express Draggin Wagon
There are also a number of subtle, yet incredibly detailed, custom touches on the truck that even diehard Ram fans would have trouble spotting at a glance, including a rear bumper that was split, the center step flipped and sectioned, and the signature Ram tailpipe cutouts moved inboard, giving it a thoroughly factory appearance. And up front, Pfaff designed brake-cooling inlets under the headlamp housings and the hood scoop, with the style and texture to match the grille, but they look for all the world like part of the Ram’s standard features. He had them CAD-designed by Classic Design Concepts and 3D-printed by Synergeering Group.
And let’s talk about the headlamps for a moment. They’ve been completely gutted by Lightwerx Offroad and customized with blacked-out housings, smoked reflectors, and all-new projector-beam lamps, along with sequential turn signals. When it came to the auxiliary lighting, Pfaff himself fabricated one-off ram’s horn brackets for a roof-mounted Heise LED lightbar. Finally, check out the graphic messages spelled out on the Toyo tires. The fronts say, “For Turning,” and the rears say, “For Burning.” Clever. They add to the seemingly endless number of custom touches throughout the truck. 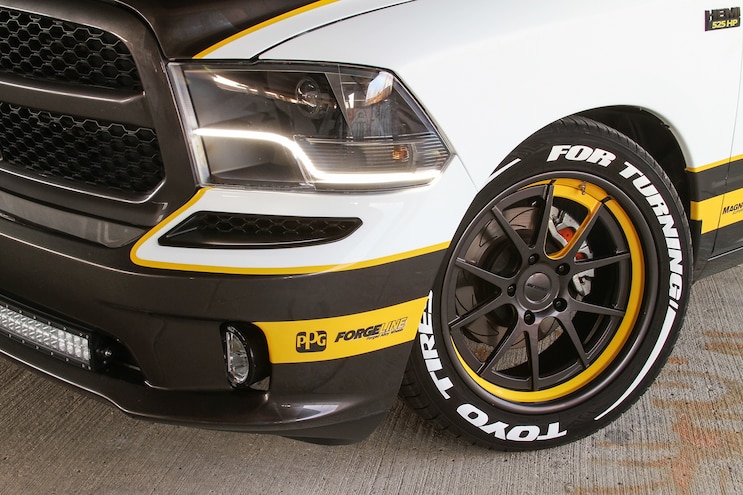 View Photo Gallery | 13 Photos
Photo 4/13   |   12 2014 Ram 1500 Express Draggin Wagon
In contrast, the Magnuson blower kit was a relatively simple bolt-on affair, which pumped up the already potent Hemi engine from 395 horses to 535 horsepower. It’s enough to give the slammed Ram a satisfying shove up Woodward Avenue, in Royal Oak, Michigan, the cruising hotspot of Detroit’s suburbs, which Pfaff calls home. The engine is backed by Chrysler’s eight-speed automatic and the 3.55-geared Sure-Grip limited-slip rear axle.
“It’s seamless performance,” Pfaff says. “I drive this truck every day like a shop truck, and the supercharger is there when I want it, but it’s otherwise is imperceptible in regular traffic. It’s everything you want in a high-performance package these days.”
Every element on this retro-radiant Ram has been carefully crafted with the attention to detail that’s earned it accolades, such as the Best Modified Dodge at the Muscle Car and Corvette Nationals in Chicago, and a first-in-class award at the Detroit Autorama. But for all of its show-car swagger, it’s still a Home Depot weekend hauler, and one that really hauls! Here’s to inspiration and all it can deliver when backed up with the hard work required to make it a reality. Rick and A.J. Simon would approve. 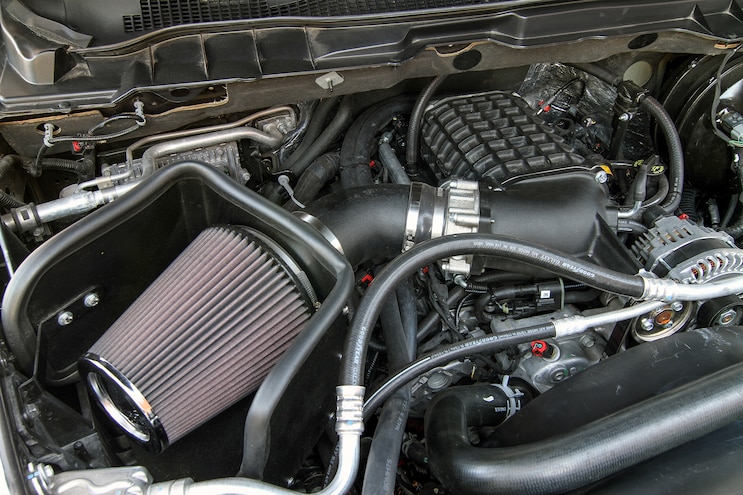 - OF
By Barry Kluczyk
19 Articles