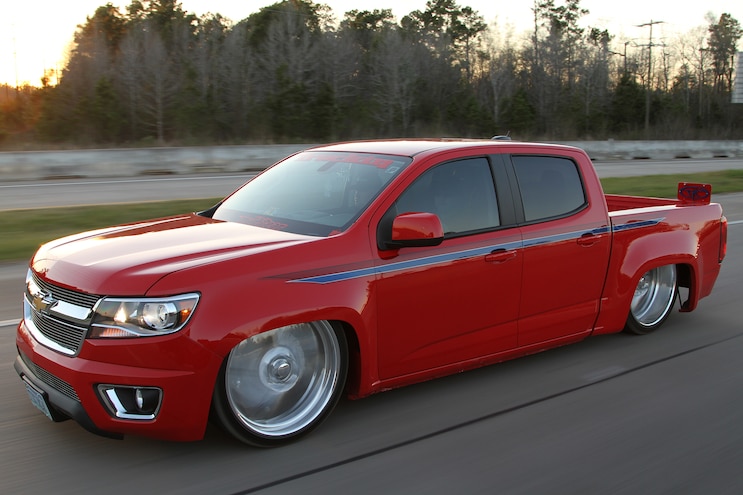 The concept of being the first to arrive or the first to set foot in a new world has excited us since day one. Famous first arrivals like that of Columbus or Lance Armstong resonate throughout history. Feats of first automotive customization stake their claims on a greatly downscaled playing field, but to the diehard custom crowd, it is still a similar accomplishment.
Nick Nikoloutsos of Virginia Beach, Virginia set out to win this automotive glory and adventure with his most recent SEMA build. From the moment he laid eyes on the conceptual renderings of the all-new 2015 Chevy Colorado Crew Cab in Truckin, he was consumed by his plans to customize one to his liking. His determination was fueled by a single vision—to design and build the very first 2015 body-dropped Colorado. He prepared for his quest by recruiting Vince Vandyke of Redwood Customs to partner with him in the build process. Nikoloutsos also sought the support of the other Virginia Beach Twisted Koncepts Club members, his fellow club members, to help complete the lofty task ahead. 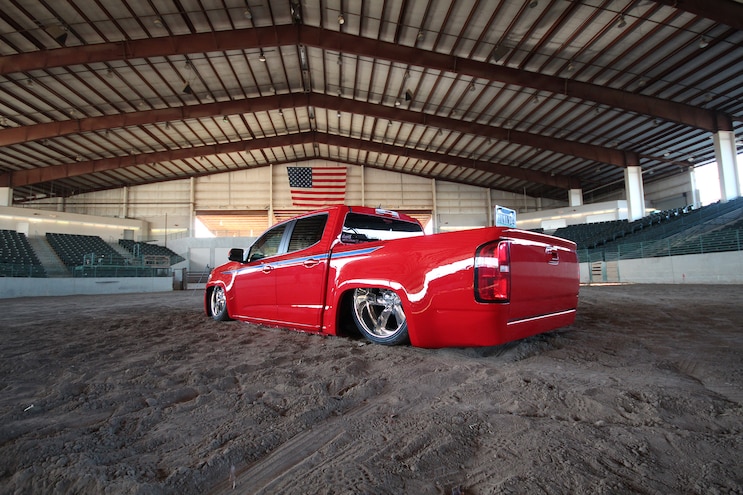 View Photo Gallery | 21 Photos
Photo 2/21   |   04 2015 Chevrolet Colorado Red Devil
Having been a passionate mini-trucker through-and-through since the age of 15, Nikoloutsos had one final point to prove with his new undertaking, and it was a simple one. Neither a studio-grade shop, nor a small fortune’s worth of tools and equipment, are needed to make one’s dream a reality. All it takes is determination, the right team, and plenty of long nights.
Between the combined efforts of himself and Vandyke, Nikoloutsos remained confident in the team’s abilities to see the SEMA dream realized. Each of them played to their strengths and took on a different horn of the bull. Nikoloutsos continued to drive as lead designer for the build process, while Vandyke got down to business and began cutting. In a Virginia Beach garage during the dead of January, they began the teardown process of a brand-new 2015 Colorado. Nikoloutsos, Vandyke, and Twisted Koncepts members, removed the bed and cab entirely from the truck. Countless hours were spent mocking up the frame for new suspension components, including the custom control arms, fueled by the fact that no one had attempted a new generation Colorado build yet. After more than eight months of painstaking work, a full custom 3x4x.25-inch box tubing frame sat complete and begging for the body to be fitted. Five inches of body drop were achieved by means of handmade frame rails, upper and lower control arms, and factory spindles, using Michigan Metal Works (MMW) supplied heim joints. The process of adapting factory spindles to accommodate such a drastic new suspension and drop lovingly earned the Colorado’s nickname “Red Devil,” as she definitely fought the crew every step of the way. The devilish mini now lays out comfortably on Slam Specialties RE 7s and RE 8s along with dual Viair 480c compressors, all well managed by AccuAir E-Level. 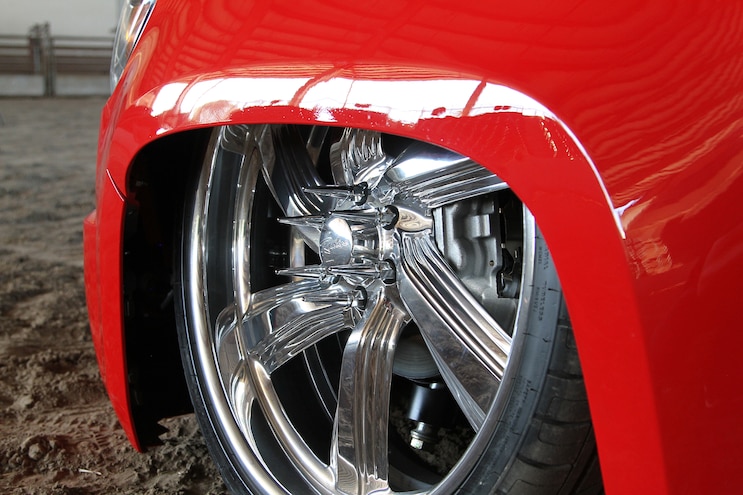 View Photo Gallery | 21 Photos
Photo 3/21   |   10 2015 Chevrolet Colorado Red Devil
A custom Thorbros four-link rear setup supports the rearend, which has been narrowed 7.25 inches by Jason Riner of Outlaw Rods and Customs in Norfolk, Virginia. The extensive and thorough work makes enough room for Raceline Explosions 6s, measuring 24x9-inch fronts with 6.25 inches of backspacing and the 24x10-inch with 4.5 inches of backspacing out back. The gorgeous rollers are wrapped in gratuitous amounts of rubber, using Durun 275/30/24 and 295/30/24 tires. Putting power down to these massive billet rollers is a factory GM 3.6L 6-cylinder, which sips from a custom 21-gallon fuel cell built by Trevor Mathews of Metalworx. The subtle engine modifications include a custom-built cold-air intake system by Virginia Speed and custom 3-inch cat-back exhaust. The V6’s power is sent through a custom two-piece driveshaft from Gregory’s Machine Shop, and electricity comes from a Kinetic HC-2400 ProSeries battery.
In truly professional fashion, what lies beneath and behind the body is just a beautiful as the panels and paint themselves. For this particular truck, that is saying quite a lot. A custom billet upper and lower grille from Trex make the frontend as unique as the rest of the build. Along the clean lines of the body lay smooth and painted door handles and a shaved fuel filler, which was relocated to the bed. The rear bumper indentations have been smoothed and a one-off roll pan put in place. The bedrails themselves have been smoothed and painted, as well as the inner bed structure, which has also been smoothed out. The front fenders include rolled lips and smoothed mudguard holes. Finally, finishing off the customized body is an over the tailgate license-plate bracket, all of which was handled by Josh Welch at Welch’s Chop Shop. 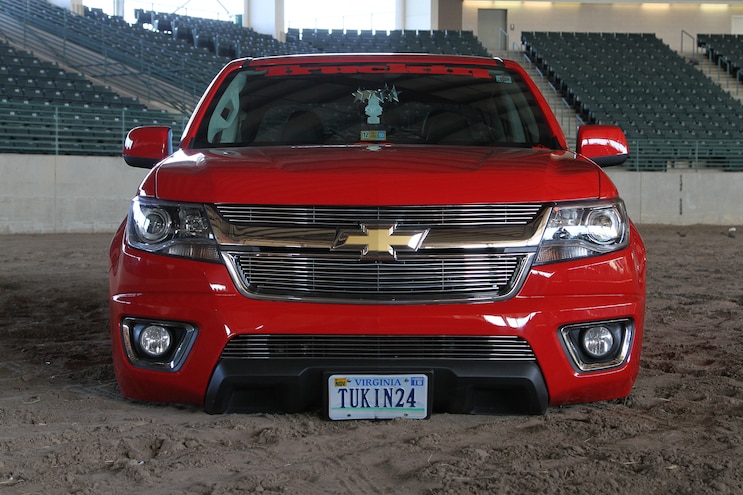 View Photo Gallery | 21 Photos
Photo 4/21   |   11 2015 Chevrolet Colorado Red Devil
Red Devil was aptly painted a GM factory red with one-off red and blue graphics by none other than Adam Lovette of Lovette’s Auto Works in North Carolina. The factory interior has been left to OEM beauty, except for the trim pieces like the dash, center console, and door trim, which have all been hand pinstriped by Brandon McCoy. The truck made her first debut at the 2015 SEMA show and has since been repainted for the 2016 Lone Star Throwdown. At LST 2016 the build earned the Promoter’s Choice Award.
Top to bottom, front to back, inside to outside, this truck has been tailor-made for uniqueness and excellence heading into uncharted territory. Straying down a path less trodden is one thing, cutting a new path all together through the thick of the woods is another thing entirely. From the get-go, before even having purchased the ’15 Colorado, Nikoloutsos’ vision was crystal clear. Build a mini that no one had built before. The entire automotive industry rests upon risk taking, dedication, and the pure pursuit of passion. We congratulate and applaud his commitment to doing the undone and to continue shaping mini-truckin’ as we know it. 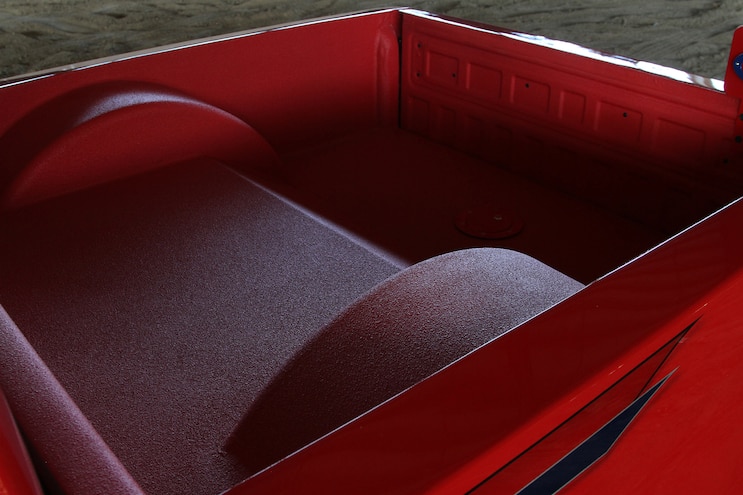