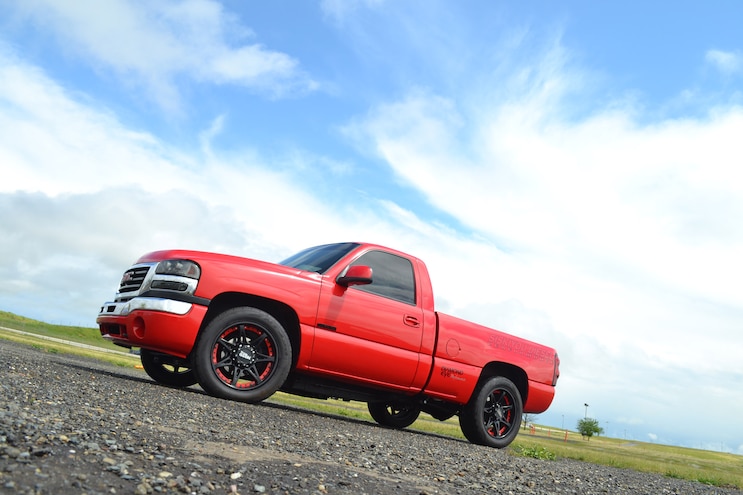 In the world of high performance and motorsports, weight, well, more accurately, excessive poundage, has been the pursuit of speed’s nemesis for a long time, because almost every pound added on a vehicle makes its power-to-weight ratio worse and worse. With diesel-powered pickups, the battle with heft is extremely difficult, as the trucks aren’t exactly built as featherweights by the manufacturers. Based on lessons learned by removing a ton of weight from his Dodge Ram drag truck, Mat Ray of Central Point, Oregon, decided to take the lightweight route for building the 6.6L Duramax-powered ’04 GMC Sierra 2500HD you see here. The pickup, a regular cab, two-wheel drive (the lightest configuration you can buy), was already converted to a shortbed. While a majority of the “shorty” conversions require cutting a section from the stock frame (typically in the middle), Mat’s GMC features a rear axle that is moved forward (with the frame chopped at the rear). The modification keeps a majority of the stock understructure intact and gives Mat more confidence about adding power. 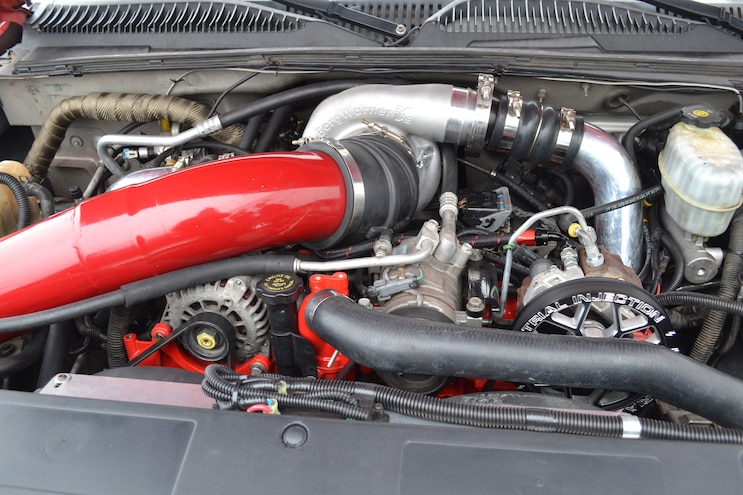 View Photo Gallery | 21 Photos
Photo 2/21   |   A lot of people are surprised to find an 800hp 6.6L Duramax diesel under the hood of a shortbed truck. No, you can't buy them like that, and Mat says you can't have his, either.
Initially, with its 5,500-pound weight, Mat's Sierra got with the quickness program in a hurry, running 13-second e.t.’s with basically stock power. Then, in a streak of bad luck, a main bearing in the engine spun, and a dragstrip mishap resulted in a broken driveshaft and transmission case. With the entire truck basically needing repair, Mat took a break.
In 2016, Mat decided it was time to resurrect his little shorty. A completely new engine was built around a fresh block, an LML crankshaft, and about half of the SoCal Diesel parts catalog. ARP bolts and studs found their way onto the mains, the Carrillo connecting rods, and SoCal’s Stage 1 cylinder heads. Mat also went the extra mile to ensure the engine’s durability, adding Dmaxstore.com motor mounts to keep the new powerplant firmly planted in its cradle. 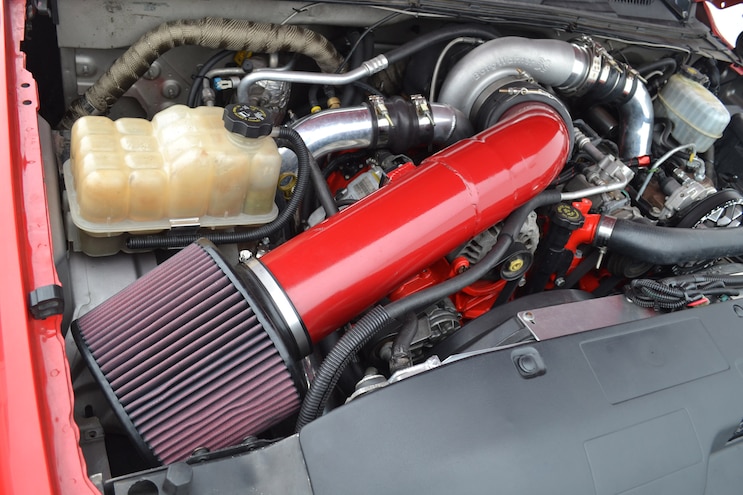 View Photo Gallery | 21 Photos
Photo 3/21   |   A large, open-element air filter is just the right size for placement in the front fenderwell. It's connected to a custom-bent cold-air intake that was powdercoated by Outlaw Powder Coating & Fabrication.
Although Mat had already swapped the original turbocharger setup for a single BorgWarner S480 turbo before the engine expired, he still upgraded the new effort with all the latest parts. The exhaust system starts with Pacific Performance Engineering high-flow manifolds and up-pipes and continues into a T4-flanged turbo pedestal and JGS Precision Turbo Control Products 40mm wastegate Mat integrated himself. A quicker-spooling, 76mm BorgWarner S400 (with the new SX-E compressor wheel) replaces the S480. The airflow strategy is completed with an open-element cold-air-intake setup Mat built himself and Mishimoto intercooler pipes. The exhaust is quite extensive, highlighted by a Diamond Eye Performance downpipe, quiet-tone front pipe, and dual-exit exhaust tips. 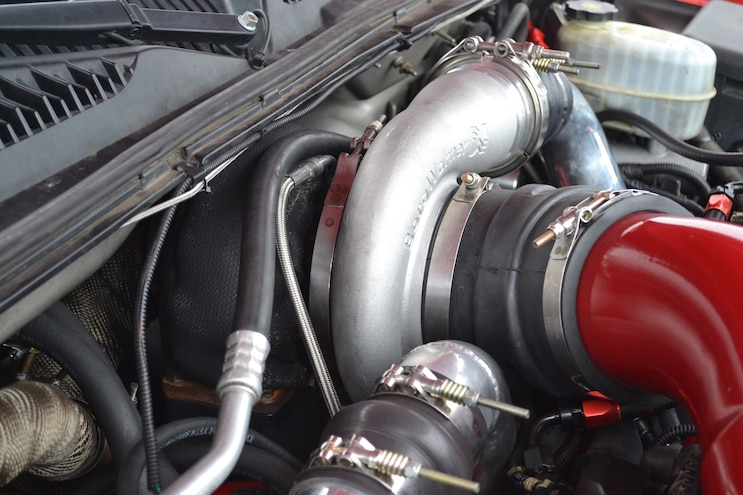 View Photo Gallery | 21 Photos
Photo 4/21   |   Mat has tried different turbochargers on his GMC’s oil-burner, but this 76mm BorgWarner S400 is the only one that pushes 52 psi of boost into the engine.
Since Mat’s plan is to inject nitrous oxide, the truck’s fuel system is seriously overbuilt to ensure the engine gets plenty of diesel. Fuel flows from the stock tank through a Bean's Diesel Performance sump and into a FASS 220-gph lift pump. Mat also added an Industrial Injection 12mm CP3 injection pump in the valley and retained the original LBZ pump up top. The injectors are mammoth 175-percent-over pieces from Exergy Engineering, and a Pacific Performance Engineering race plug makes sure the rail doesn't pop off early. EFILive ECM tuning is handled by Danville Performance.
Since Mat was shooting for an honest 800 to 1,000 hp, other areas of the shortbed also needed upgrades. While the front suspension remains surprisingly stock, two leafs were taken from the rear spring pack, and CalTracs traction bars are in place to help fight wheelhop. The rearend is fitted with 3.73 gears, a PPE differential cover, and a Grizzly locker from Yukon Gear & Axle. The Allison 1000 five-speed automatic transmission received a full build by Mat, which includes a Goerend Transmission triple-disc torque converter, SunCoast Diesel Transmissions P2 planetary fix, and TCS input and intermediate shafts. 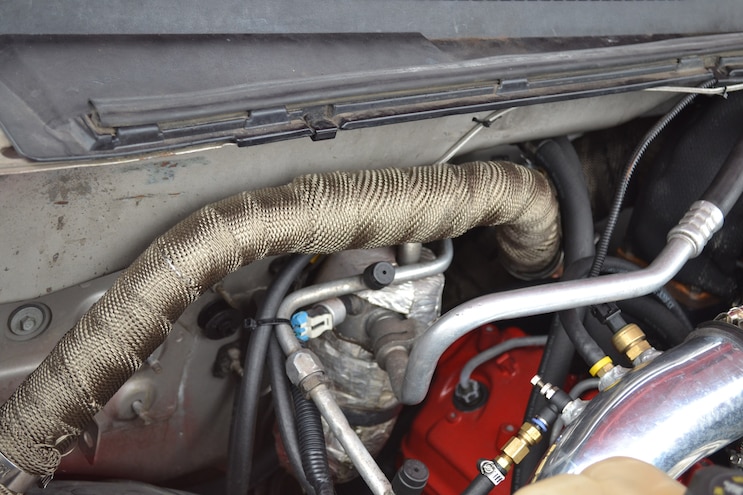 View Photo Gallery | 21 Photos
Photo 5/21   |   In anticipation of using nitrous oxide (mainly to hit 1,000 hp on the dyno), Mat incorporated a 40mm wastegate from JGS Precision Turbo Control Products into the build to control drive pressure and keep the turbo from overspeeding.
Despite Mat’s fierce build plan, years went by without much to show for it. “I had a timeslip of 13.2 seconds at 117 mph, and the truck had never been on a dyno,” Mat recalls. As our deadline for this report neared, Mat pleaded for just a few more days so he could try and get another timeslip. “With a 1.9-second 60-foot, it wasn't a rocket of a pass, but at least it was solid,” Mat says of the truck’s 11.49-second-at-124-mph pass. For Mat, the real fun lies in slinging the truck sideways and doing burnouts and donuts at the surprise of onlookers. “When it comes to fun, sometimes a little less is more,” he says. 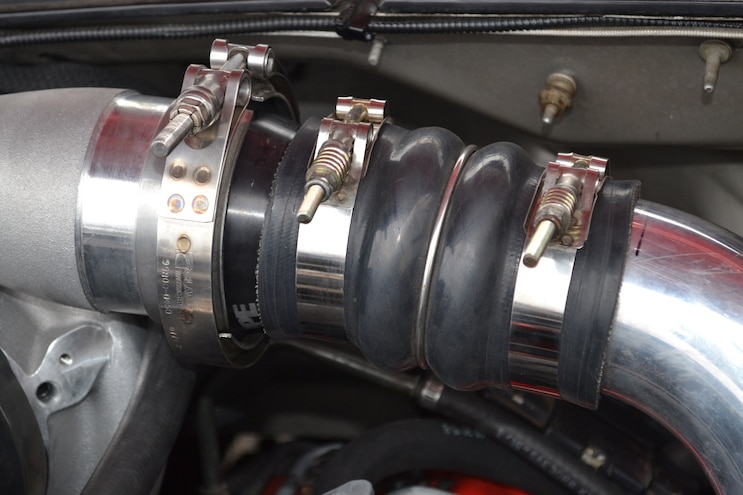 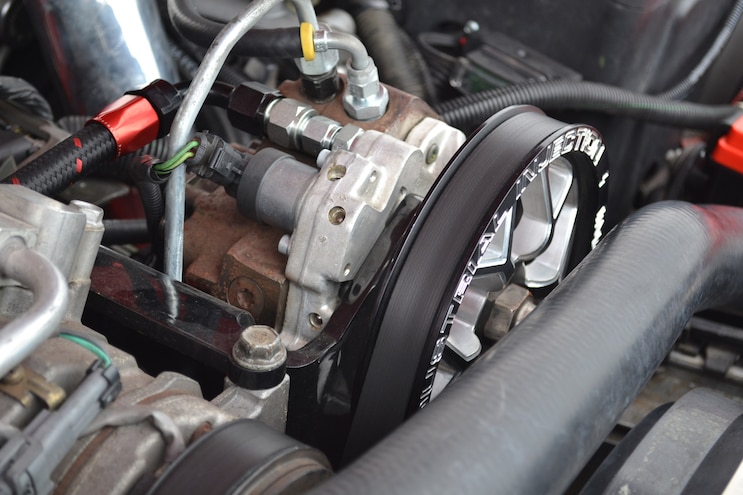 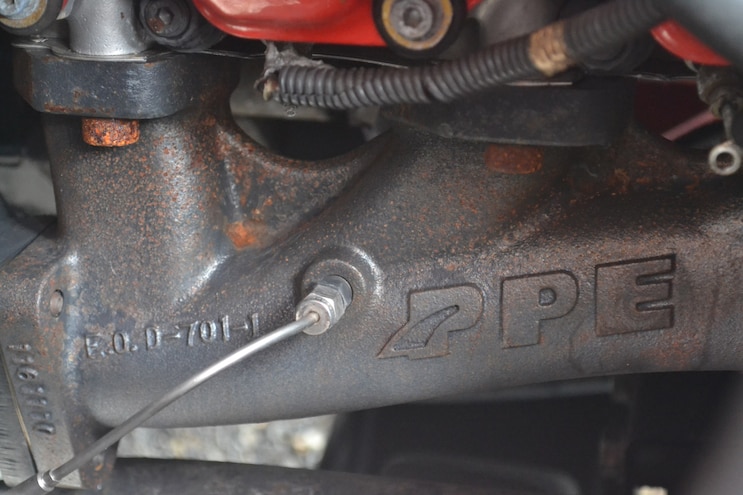 View Photo Gallery | 21 Photos
Photo 8/21   |   Not only do PPE's manifolds flow a lot more than the stock pieces, removing the exhaust bottleneck is a big help for lowering exhaust gas temperature. 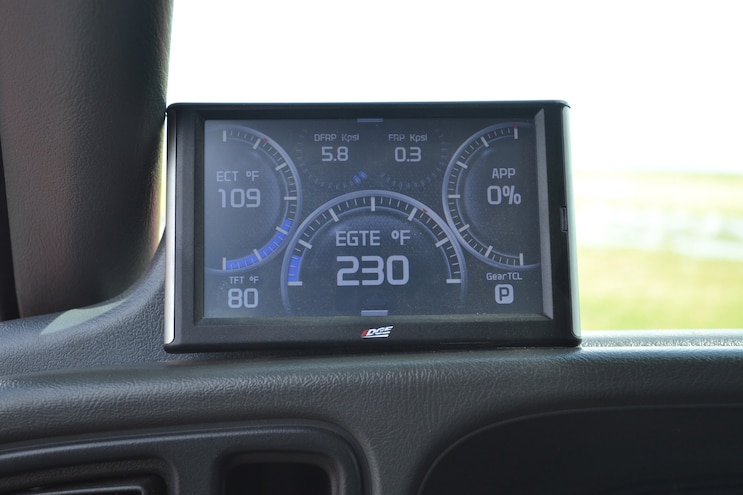 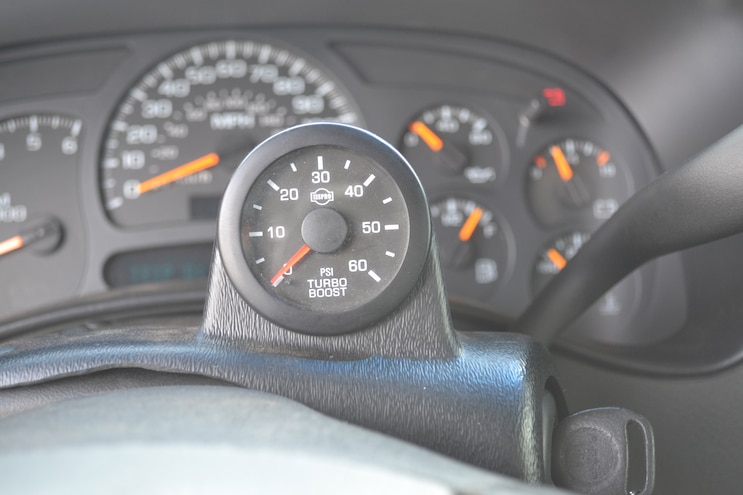 View Photo Gallery | 21 Photos
Photo 10/21   |   Mat mounted his boost gauge front and center above the steering wheel, so he can keep one eye on the road while looking at it. 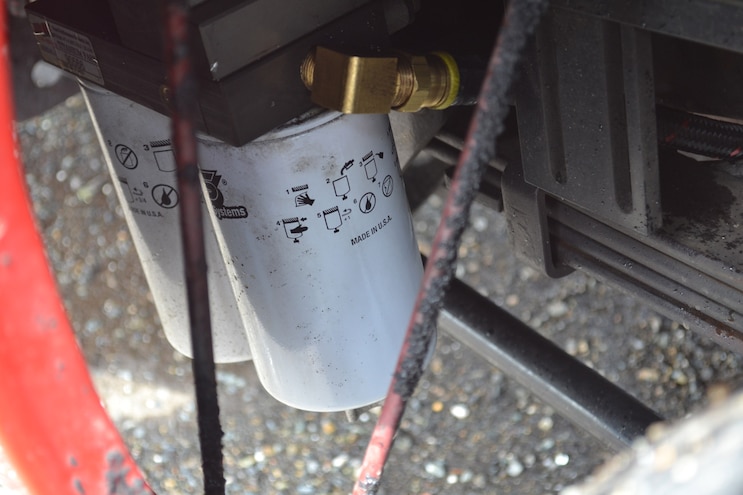 View Photo Gallery | 21 Photos
Photo 12/21   |   CalTracs traction bars and two leafs removed from the rear spring pack are the truck’s only suspension modifications. Mat’s goal is to whittle the 60-foot e.t. down into the 1.6-second range. 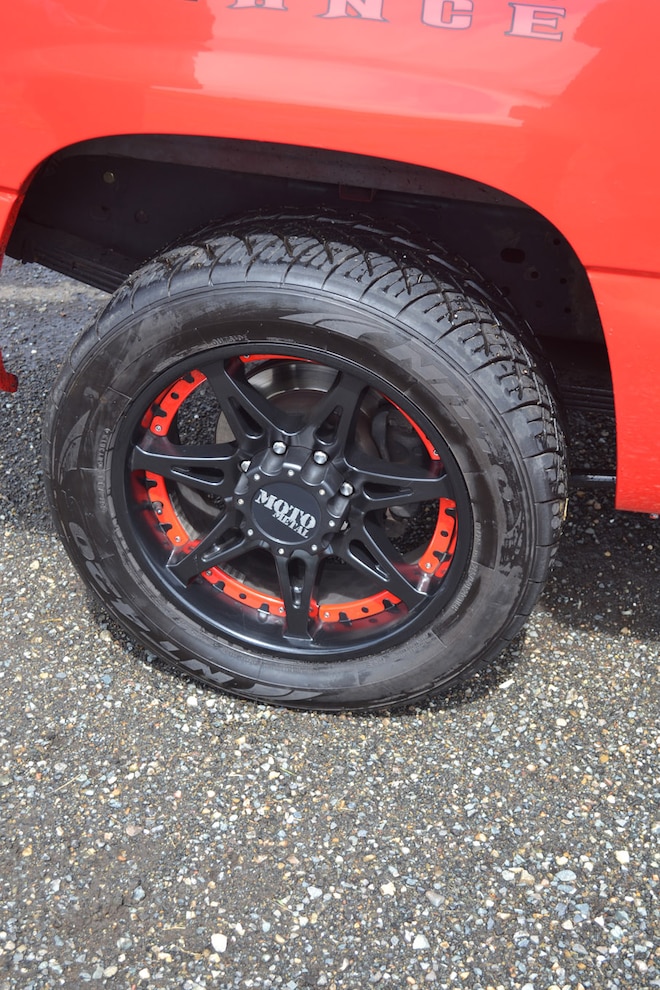 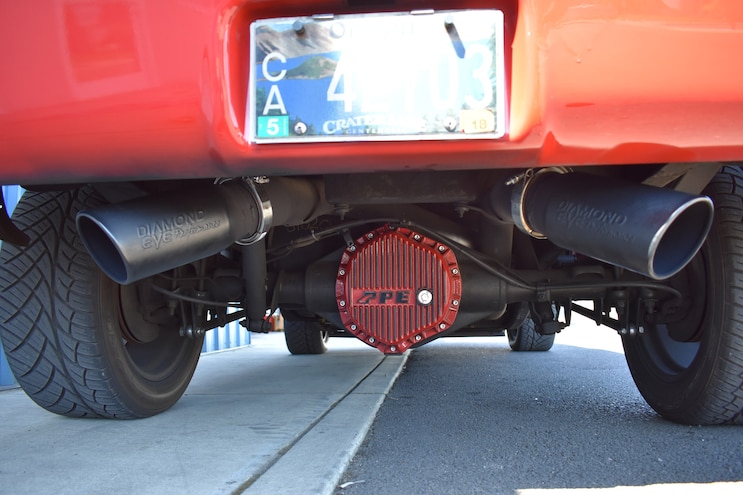 View Photo Gallery | 21 Photos
Photo 14/21   |   The exhaust system on the ’04 GMC Sierra 2500HD is as unique as the truck itself and uses V-bands into twin-exit tips so that the exhaust can easily be changed for track use. Very visible beneath the shorty is the bright red PPE differential cover.