Truck Concepts: The Weird and the Wonderful At first blush, pickup design doesn’t seem to have changed much in the hundred-plus years since the body style hit the market. A cab and cargo box, mounted to a ladder-type frame, is the de facto configuration for almost all pickups, with a few notable exceptions (Subaru BRAT/Baja, Plymouth Scamp, Chevrolet El Camino, et al).
Digging deeper, however, reveals a wealth of design innovation on the pickup scene. Modern trucks like the Ford F-Series and Chevrolet Silverado/GMC Sierra sport state-of-the-art aluminum and high-strength steel construction, while powertrain innovators at Ram and Cummins are bringing efficiency and capability to a level that would be laughable just 10 years ago. And when you include the show-floor stunners in your mix, the truck market looks positively futuristic.
Join us as we take a look back at some of the weirdest, wildest, and most interesting pickup concepts from the last 25 years. 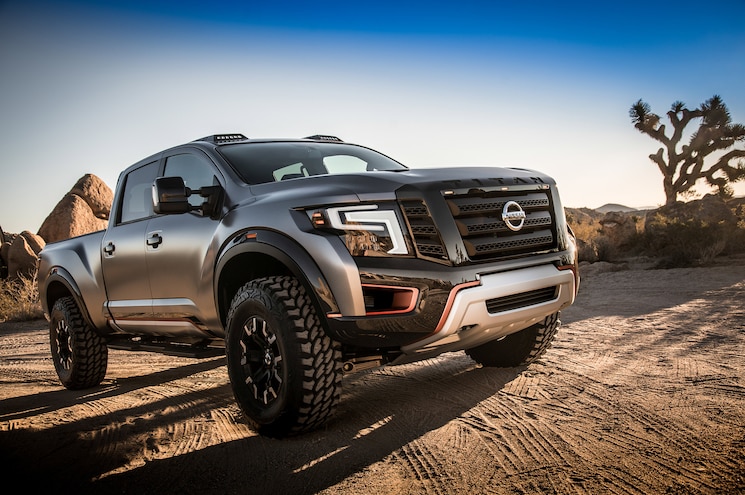 View Photo Gallery | 31 Photos
Photo 2/31   |   2016 Nissan Titan Warrior
2016 Nissan Titan Warrior
The Nissan Titan Warrior concept was based on the recently released ’16 Nissan Titan XD production pickup. It was built to highlight the truck’s “extra-duty” market positioning, showing off its tough construction and segment-exclusive turbodiesel V-8. It also included a cadre of sophisticated off-road hardware, including custom high-clearance bodywork, a long-travel suspension, and the stability of a wider stance. Unique styling and a custom interior complete the package, and we like it a lot. 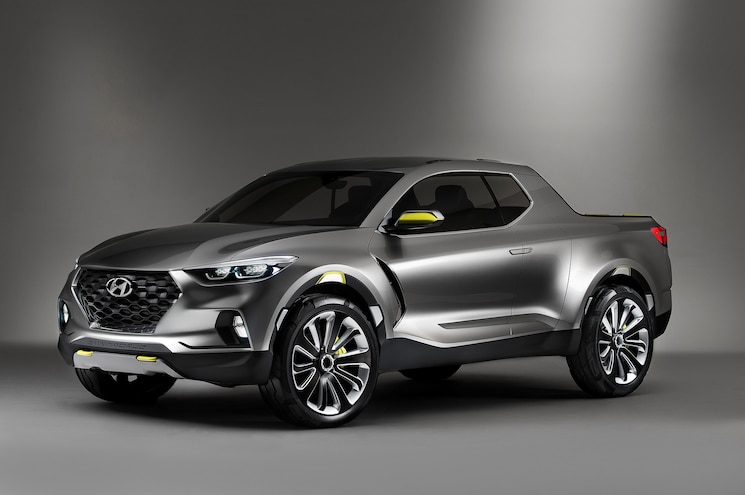 View Photo Gallery | 31 Photos
Photo 3/31   |   2015 Hyundai Santa Cruz Front View
2015 Hyundai Santa Cruz
With unibody construction, a compact diesel engine, and wild styling, the Hyundai Santa Cruz could presage a future U.S.-market vehicle for the South Korean automaker. It could also signal a return to truly compact pickups, as its footprint is smaller than that of the midsize Chevrolet Colorado. The Santa Cruz is intended to give CUV drivers a slightly more dirt-friendly alternative, with a comfortable, carlike interior and a hose-it-out cargo bed. All-wheel drive is a given, but a low-range transfer case is unlikely. While it won’t give the Toyota Tacoma TRD Pro a run for its money off-road, it’s still a cool-looking pickup for urban adventures. 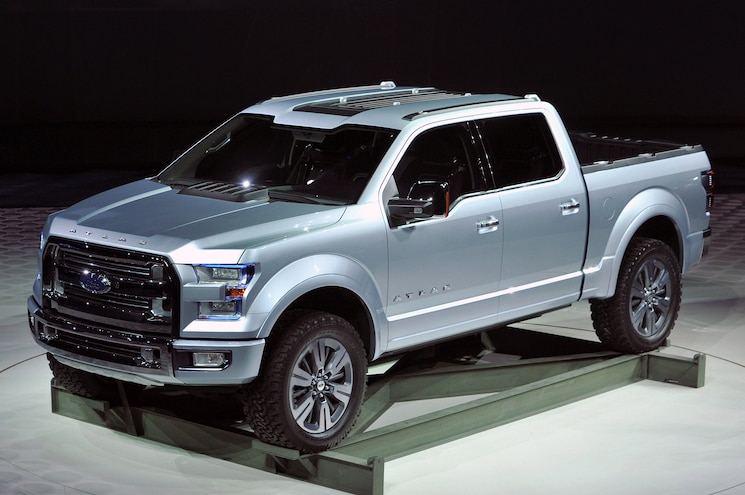 View Photo Gallery | 31 Photos
Photo 4/31   |   2013 Ford Atlas Front View
2013 Ford Atlas
In 2013, Ford trotted out the Atlas concept to preview the upcoming F-150 pickup. Featuring sophisticated aerodynamics, aluminum construction, LED lighting, and a 360-degree camera system, it was a surprisingly accurate forecast of what the ’15 F-Series looked like. Its styling was crisp and modern, a trait it shares with the production pickup. We loved the Atlas when it hit the show scene, and we likewise respect and appreciate the current F-150. 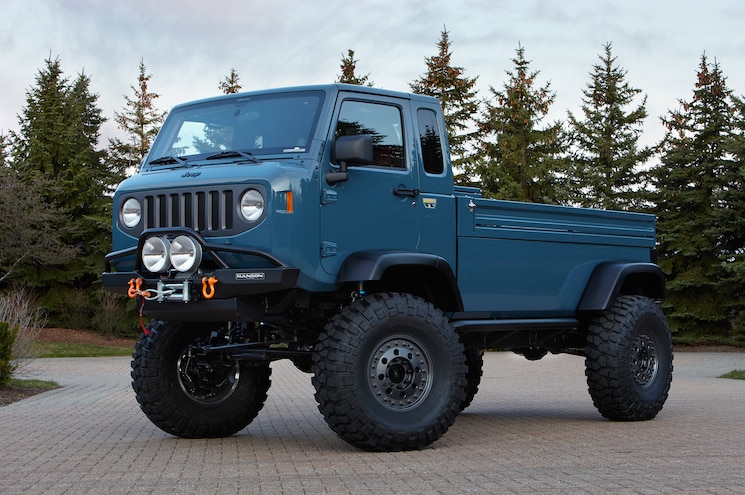 View Photo Gallery | 31 Photos
Photo 5/31   |   2012 Jeep Mighty Fc Front View
2012 Jeep Mighty FC
Constructed for the Easter Jeep Safari in Moab, the ’12 Jeep Mighty FC is a concept based heavily on the Wrangler SUV. Like the original Jeep Forward Control, the truck’s cab is mounted on top and in front of the front axle, with a useful 8-foot bed chasing behind. Mopar Accessories portal axles provided excellent ground clearance without too much suspension lift, and the Wrangler’s stock V-6 and automatic transmission powered the whole setup. We certainly wouldn’t kick one out of the garage. 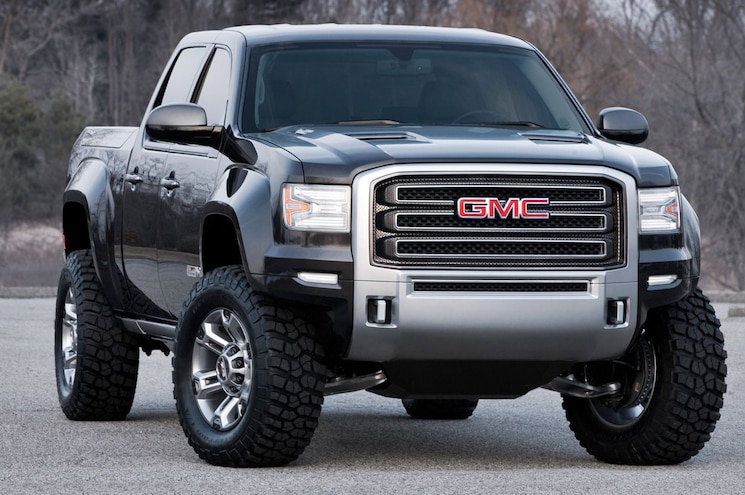 View Photo Gallery | 31 Photos
Photo 6/31   |   2011 Gmc All Terrain Front View
2011 GMC All Terrain
Based on the ’11 GMC Sierra HD chassis, the All Terrain concept showed what the “Professional Grade” people were capable of. A 3-inch suspension lift and 35-inch tires created 11.8 inches of ground clearance, and the wheel offset was changed relative to a stock Sierra 2500HD to improve maneuverability and stability. An electronically disconnecting anti-roll bar helped increase articulation. Like the Nissan Titan Warrior concept, GMC gave the All Terrain unique, aggressive styling we wish would have turned into the current generation of GMC pickups. 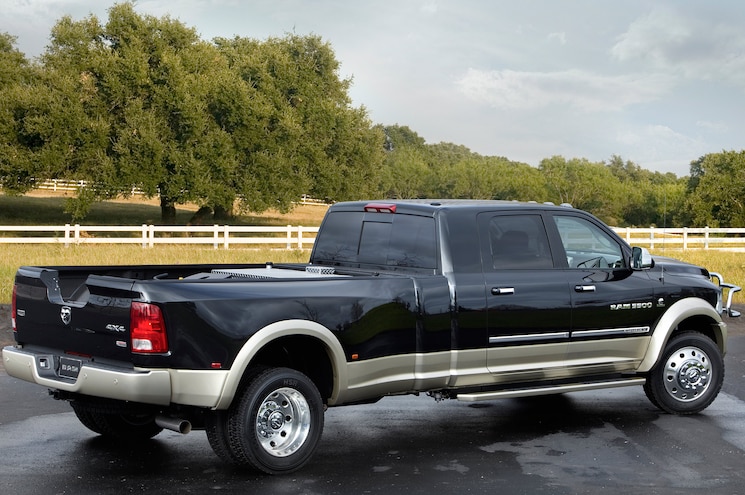 View Photo Gallery | 31 Photos
Photo 7/31   |   2011 Ram 5500 Long Hauler Rear
2011 Ram 5500 Long Hauler
This is one concept we really wish would make the jump to production. The Ram 5500 Long Hauler was built on the longest wheelbase the company makes: a 197.4-inch unit originally designed for use on the Ram 5500 Chassis Cab. From that base, Ram dropped the Mega Cab from a 3500 Laramie Limited and a custom, 8-foot bed. In between the bed and cab is a 38-gallon fuel tank, and the bed itself also contains a massive 110-gallon auxiliary fuel tank. With a theoretical freeway range of 1,500 miles (while towing a trailer, no less), the Long Hauler’s name refers to both its stupendous size and impressive cruising capability. 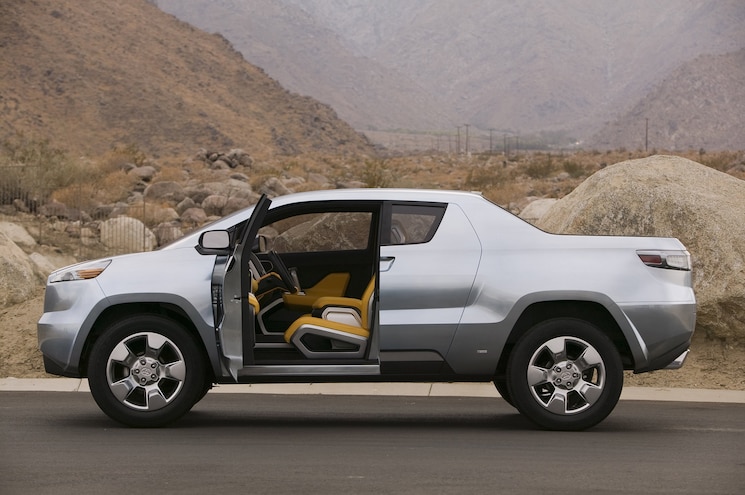 View Photo Gallery | 31 Photos
Photo 8/31   |   2008 Toyota A Bat Side
2008 Toyota A-BAT
With the contemporary Tacoma officially a midsize pickup, Toyota saw a space in the market for a true compact, so it designed the Advanced Breakthrough Aerodynamic Truck (A-BAT). Sized more like the original Toyota Pickup and Tacoma, the A-BAT also had a hybrid powertrain, unitized chassis and body, and unusual cab-forward styling. If it had made it to production, it would have been a direct competitor for the Subaru Baja and Honda Ridgeline. 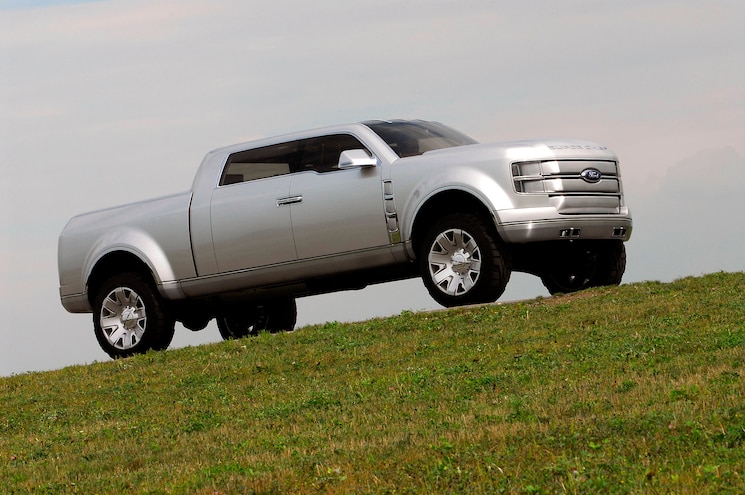 View Photo Gallery | 31 Photos
Photo 9/31   |   2006 Ford Super Chief Side
2006 Ford Super Chief
The Super Chief showed a new styling direction for Ford’s Super Duty lineup, with a bold, three-bar grille and modern lines. A supercharged V-10 engine could run on gasoline, ethanol, or hydrogen. Its tri-fuel system underscored Ford’s commitment to alternative fuels, as the company promised to offer more vehicles that were E85-capable. Incidentally, its name comes from the legendary Chicago-to-Los Angeles train that ferried the Hollywood elite in the ’40s. 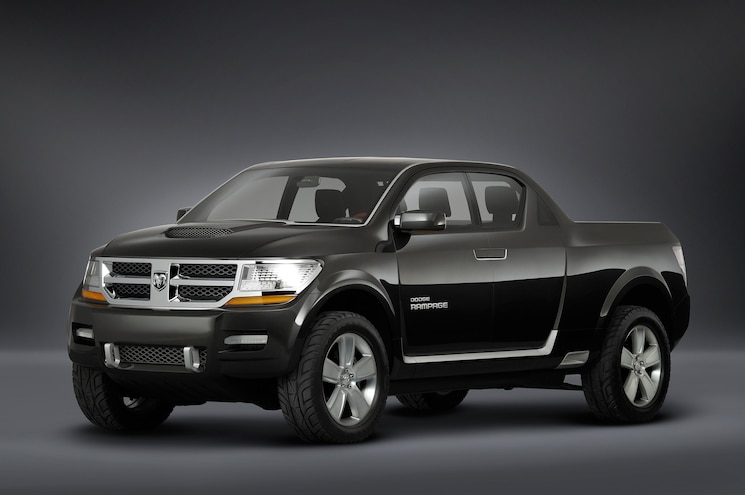 View Photo Gallery | 31 Photos
Photo 10/31   |   2006 Dodge Rampage Front
2006 Dodge Rampage
With unibody crossovers experiencing their nexus in the mid-2000s, consumer and manufacturer interest turned to pickups with carlike construction. Dodge got in on the game with the ’06 Rampage, the name donated from a compact unibody pickup the company built in the ’80s. Unlike the comparable Honda Ridgeline, the Rampage enjoyed a muscular 5.7L Hemi V-8, but powering the front wheels. Sliding doors and fold-flat rear seats were concepts donated by the company’s minivans. Truth be told, the Rampage is a bit of a noodle-scratcher, as its engine suggests heavy hauling, but front-drive torque steer and handling characteristics would very much preclude truck work. 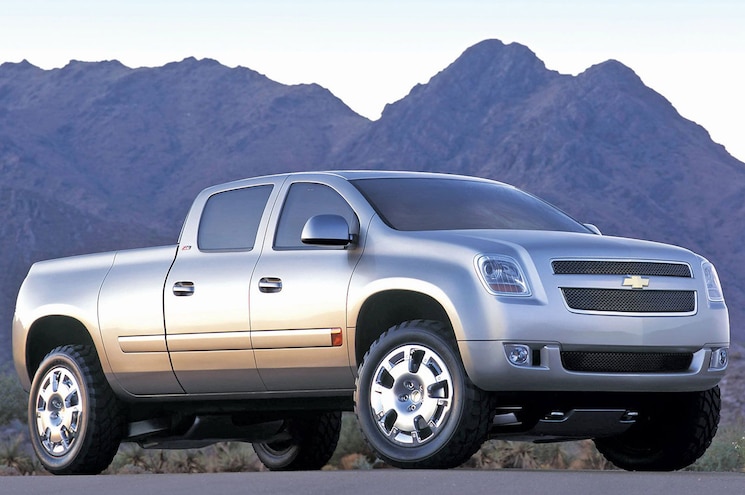 View Photo Gallery | 31 Photos
Photo 11/31   |   2003 Chevrolet Cheyenne Truck
2003 Chevrolet Cheyenne
Taking its name from the old lineup of Chevrolet C/K-Series pickups, the ’03 Cheyenne concept had carlike, sleek styling mounted atop a heavy-duty pickup chassis. A supercharged 6.0L V-8 provided motivating force, while under cargo drawers provided locking in-bed storage. Cargo could also be accessed via doors mounted on the bedsides. One of the last vestiges of the jellybean era, the sleek Cheyenne never made it to production, for better or worse. 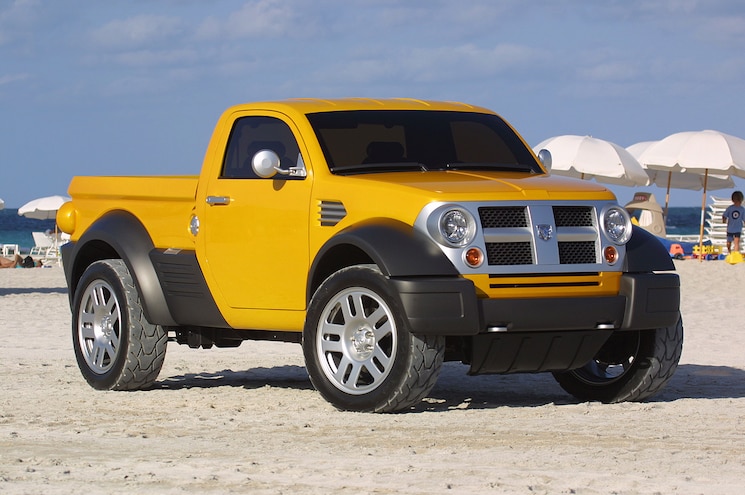 View Photo Gallery | 31 Photos
Photo 12/31   |   2003 Dodge M80 Front View
2003 Dodge M80
With a design inspired by pickups of the ’30s, the four-wheel-drive Dodge M80 concept was visually interesting. With flip-up rear glass and an in-bed ATV rack, it was functionally interesting. With a then-powerful 210hp V-6 and five-speed manual transmission, it was technically interesting. The M80 was just plain interesting. Smaller than the Dakota (and even the Tacoma), it weighed just 2,500 pounds, hampering towing capacity but improving performance. It would have been a very good city pickup or first ride for young drivers. 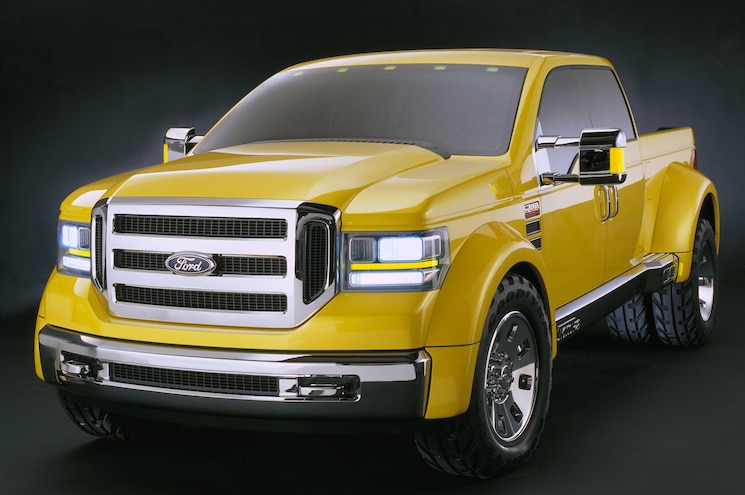 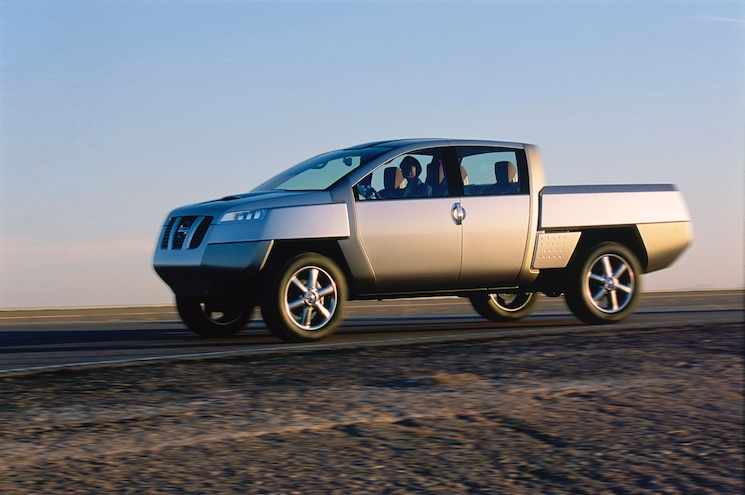 View Photo Gallery | 31 Photos
Photo 14/31   |   2001 Nissan Alpha T Side
2001 Nissan alpha-T
Futuristic, unconventional styling was the hallmark of Nissan’s full-size alpha-T concept. Fit with a 4.5L V-8 and four-wheel drive, the alpha-T presaged the company’s first fullsize pickup, the Titan. Squint at the A-pillar treatment and roofline and you’ll see the resemblance. The alpha-T’s tailgate dropped down low to create a stairlike bed step, and a sliding bed floor aided with loading and unloading. Mercifully, Nissan toned down the Terminator: Rise of the Machines styling for the production Titan. 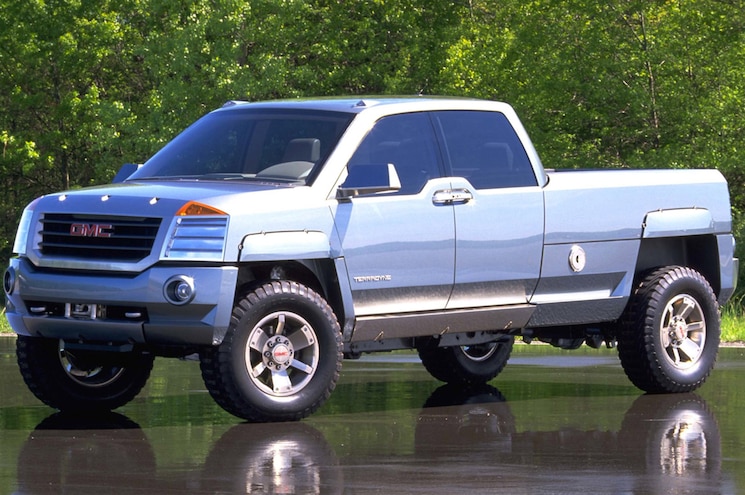 View Photo Gallery | 31 Photos
Photo 15/31   |   2000 Gmc Terradyne Front
2000 GMC Terradyne
Minivan-style sliding doors were the only wimpy aspects of the Terradyne concept, which received an early version of GM’s soon-to-be ubiquitous 6.6L Duramax diesel V-8. A stainless-steel cab meant it could easily be hosed out, and the Terradyne could also become a 5000-watt generator, reputedly producing enough power to operate an entire family home. (This was just one year after the apocalypse-terrified Y2K scare, remember?) The first application of GM’s unique Midgate rear passenger bulkhead extended the bed’s length to nearly 8 feet if required. 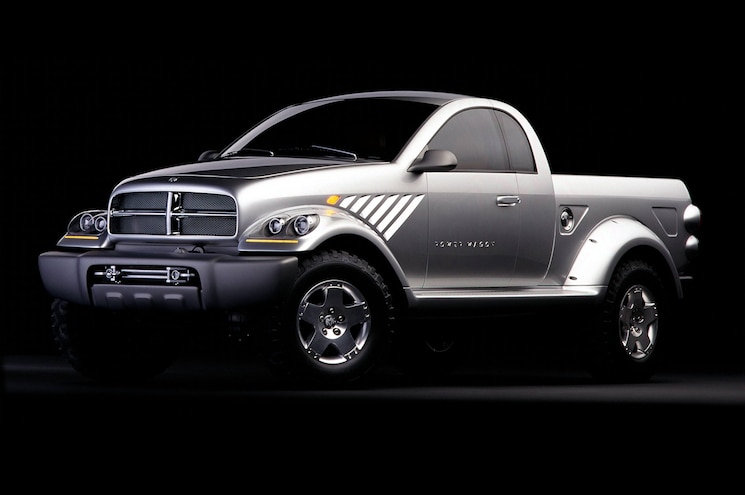 View Photo Gallery | 31 Photos
Photo 16/31   |   1999 Dodge Power Wagon Side
1999 Dodge Power Wagon
Unveiled in 1999, the Dodge Power Wagon concept was a modern interpretation of the legendary military-turned-civilian pickup of the same name from the ’40s. Pontoon fenders, an ash wood–trimmed bed floor, side hood vents, and protruding headlamps recalled the classic Power Wagon, while modern lighting, a distressed leather interior, and direct-injected 7.2L turbodiesel I-6 firmly rooted the concept in the present. As truck fans know, the Power Wagon name was reused on Ram 2500 pickups starting with the ’05 model year as an off-road special. 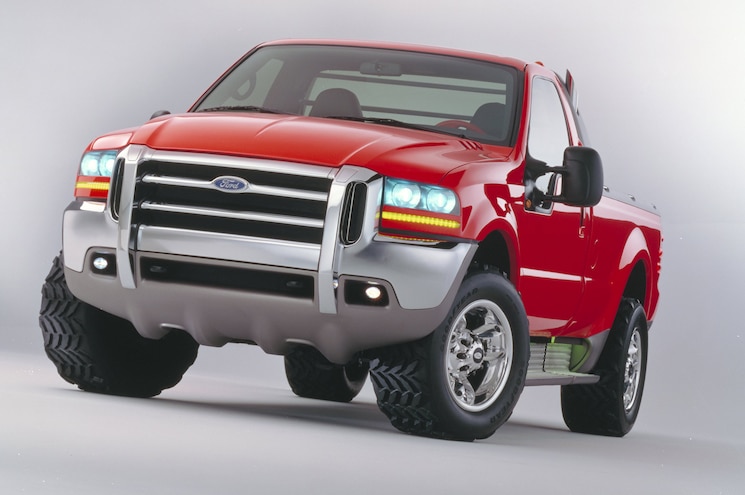 View Photo Gallery | 31 Photos
Photo 17/31   |   1997 Ford Power Force In Red
1997 Ford Power Force
You don’t even have to squint to see how this truck became the new-for-’99 Ford F-Series Super Duty. Its bold, bookend grille mimicked an off-road brush guard, and it was the first vehicle to show the F-Series–signature stepped beltline. It also came equipped with a then-new 6.8L Triton V-10 engine that would feature in Ford’s fullsize trucks and vans from ’97 to today. Solid-oak flooring provided some show-car wow. 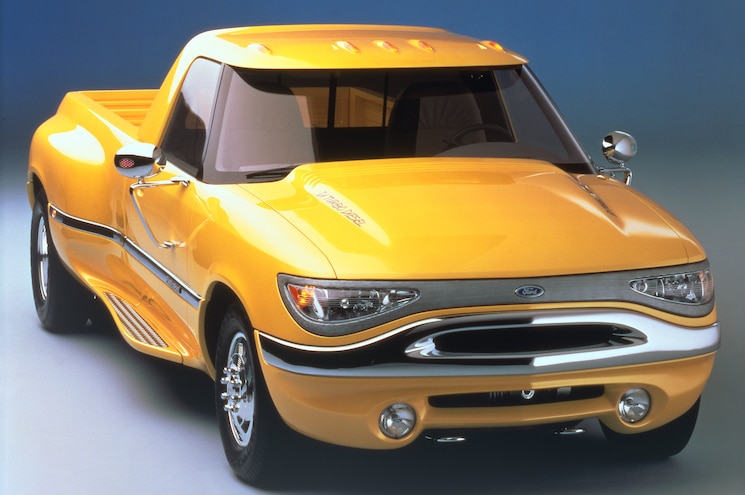 View Photo Gallery | 31 Photos
Photo 18/31   |   1994 Ford Power Stroke In Yellow
1994 Ford Power Stroke
This one’s just weird. Built to showcase the all-new Power Stroke diesel engine found in Ford’s F-250 and F-350 trucks, the Power Stroke is what would happen if you rented a cheap motel room for a Mercury Sable and a Ford pickup. The front graphic looks like a pair of sport-style sunglasses that were all the rage in the mid-‘90s, and a blacked-out A-pillar makes the Power Stroke look like it’s wearing a helmet. A single-cab dualie, the concept also sits down low, with a sport-truck stance that never made it to production. And with its bright-yellow paint, the Power Stroke wouldn’t look out of place on David Hasselhoff and Pamela Anderson’s favorite beach.