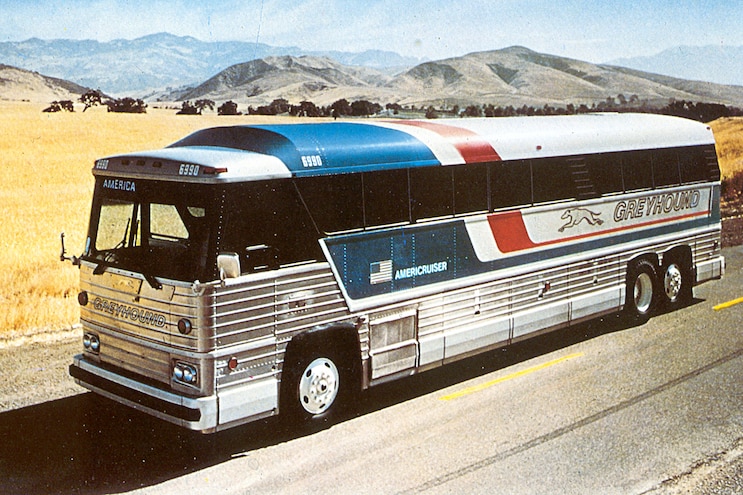 The Greyhound bus is woven into the fabric of modern American mythology. It’s been mentioned in songs from Paul Simon to Kenny Chesney and has costarred in films with Clark Gable, Dustin Hoffman, and Julia Roberts. Not that it was ever particularly glamorous. Just the opposite, really, which is exactly where its appeal lies.
Back when Greyhound was establishing itself as the world’s biggest and best-known bus service, the working classes couldn’t afford cars and even trains were too expensive. This was how people got around the sprawling nation and how they relocated in their search for employment from farm hands to jazz musicians. And it was work that started the whole venture. 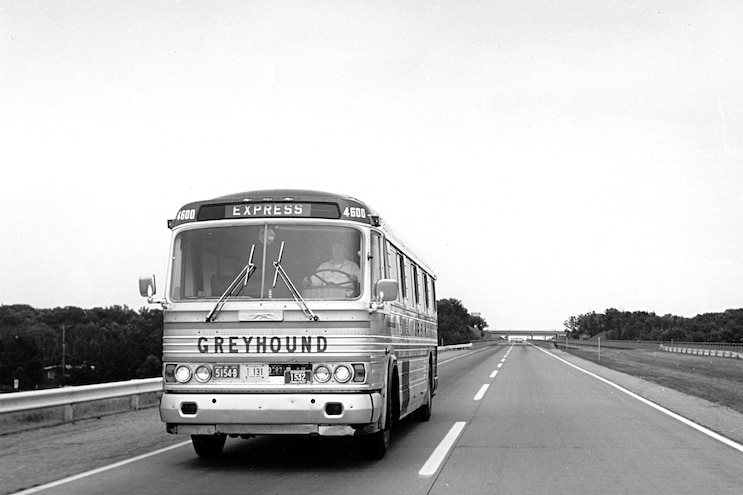 View Photo Gallery | 6 Photos
Photo 2/6   |   Greyhound Bus Front View
Apart from being the birthplace of Bob Dylan’s mother, Hibbing, Minnesota, is most widely known (if known at all) for having one of the world’s largest iron ore mines. Carl Eric Wickman, a Swedish immigrant, was once a drill operator at the mine until he was laid off in 1914.
Wickman first tried his hand (unsuccessfully) at being a Goodyear tire dealer and a salesman for the short-lived Hupmobile marque. It was an unsold vehicle that became the fledgling Greyhound, a joint venture with a fellow Swede, Andy Anderson. Even though it would only seat seven officially, the actual passenger count would sometimes be 15.
They picked up miners from one of Hibbing’s 70 saloons (in a population of 3,000) and drove them 2 miles to the mine’s fire station at Alice (which has since been swallowed up by the growing city of Hibbing). The fare was 15 cents—roughly $3.50 today. On Wickman’s first run, he made $2.25. In the following years, he would acquire rival businesses. One was the Yelloway company that ran between Los Angeles and New York, taking five days and 14 hours.

View Photo Gallery | 6 Photos
Photo 3/6   |   Old Photo Of Greyhound Bus
In 1926, Wickman’s Northland Transportation company merged with Safety Coach Lines and adopted the name Greyhound, prompted by the buses’ gray paintwork (a color that conveniently disguises road grime). Ten years later came the Super Coach, with an all-metal construction and an engine in the rear. Air conditioning came along on 1938, way before most cars. After the Second World War, the company added 1,500 new vehicles to its fleet.
Perhaps the most recognizable Greyhound bus is the “Silversides” model with its flanks fashioned from fluted aluminum. This debuted in 1940. However, the 1954 Scenicruiser might just take the title, as it came with two levels and its own bathrooms, along with seating for 43 passengers and an air suspension. At 40 feet long, it was illegal in some states (whose limits were 35 feet). 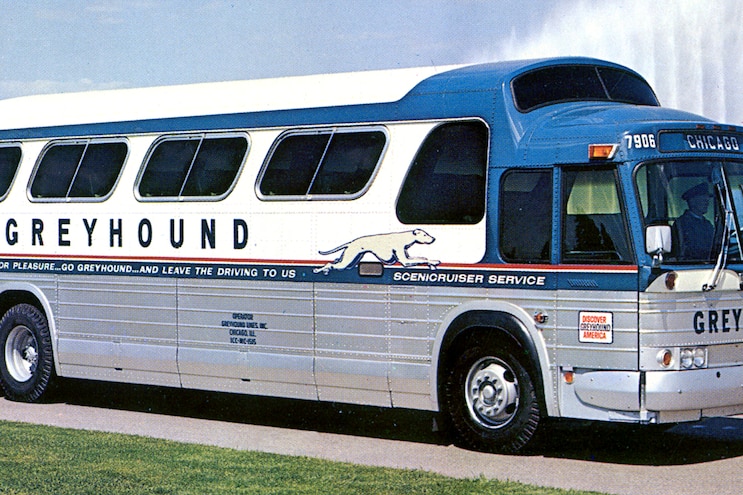 View Photo Gallery | 6 Photos
Photo 4/6   |   Side View Of Greyhound Bus
The Scenicruiser was styled by that giant of industrial design, Raymond Loewy, who was also responsible for the Hupmobile’s looks. There’s an unmistakable Art Deco vibe to it, and some of the Greyhound bus stations also followed Art Deco lines.
Wickman died the same year the Scenicruiser came out. He was 66 years old. By that time, Greyhound was covering 200 million miles a year, with 4,750 stations, and servicing around 6,000 destinations.
But it’s not been an easy journey for Greyhound, especially in the latter years. Sometimes known affectionately as “The Hound,” the archetypal Greyhound bus has also been referred to less flatteringly as “The Dirty Dog.” Amid many reports of poor customer service, sketchy stations, no guaranteed seating, and half-empty neglected buses, there was a 47-day driver’s strike in 1983, a filing for Chapter 11 bankruptcy, and another drivers’ strike in 1990. 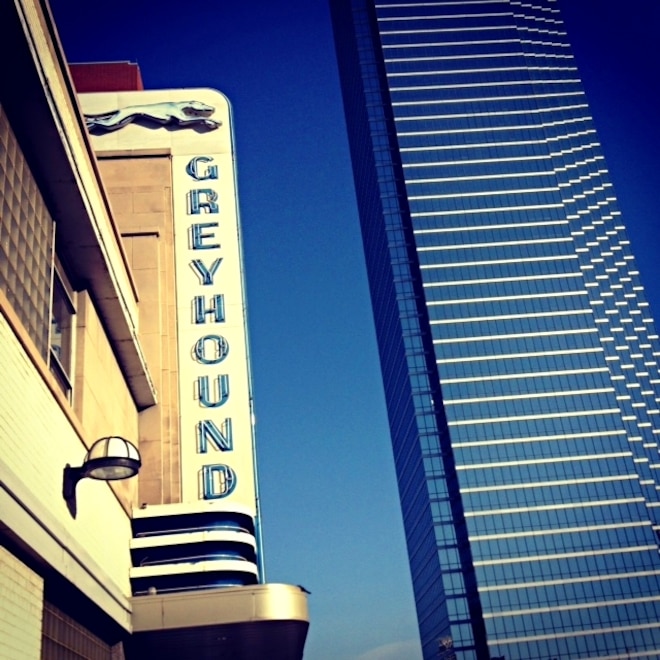 View Photo Gallery | 6 Photos
Photo 5/6   |   Greyhound Sign
The company’s proper name is Greyhound Lines, Inc. It has done some traveling of its own, moving from Hibbing to Chicago in 1930 (although the Greyhound Bus Museum remains in Hibbing, at the site of a former bus terminal), then to Phoenix in 1971, with a headquarters in Dallas since 1987. And it’s been bought out itself. The current owners are a company based in Britain, FirstGroup, which runs several coach and train services.
The main builders supplying Greyhound are currently Motor Coaches International (MCI) and Prevost. But during its existence, the company has used Fageol and GMC. The latter company manufactured the famed Scenicruiser.
There are still about 1,270 vehicles heading to 2,700 destinations on 123 routes across the United States. Buses now offer free Wi-Fi (since 2008), power outlets, leather seating and three-point safety belts. Annual passenger travel has recently been calculated at 5.6 billion miles.
An average passenger pays $52 for a trip of 355 miles. These days, it’s possible to go by Greyhound from Los Angeles to San Francisco for $22. To ride from New York to Los Angeles starts at $263.50 and takes three days. Yes, there’s now Uber and Lyft—and maybe the Hyperloop coming in a few years—but the Greyhound bus still has a place in the country’s transportation system. 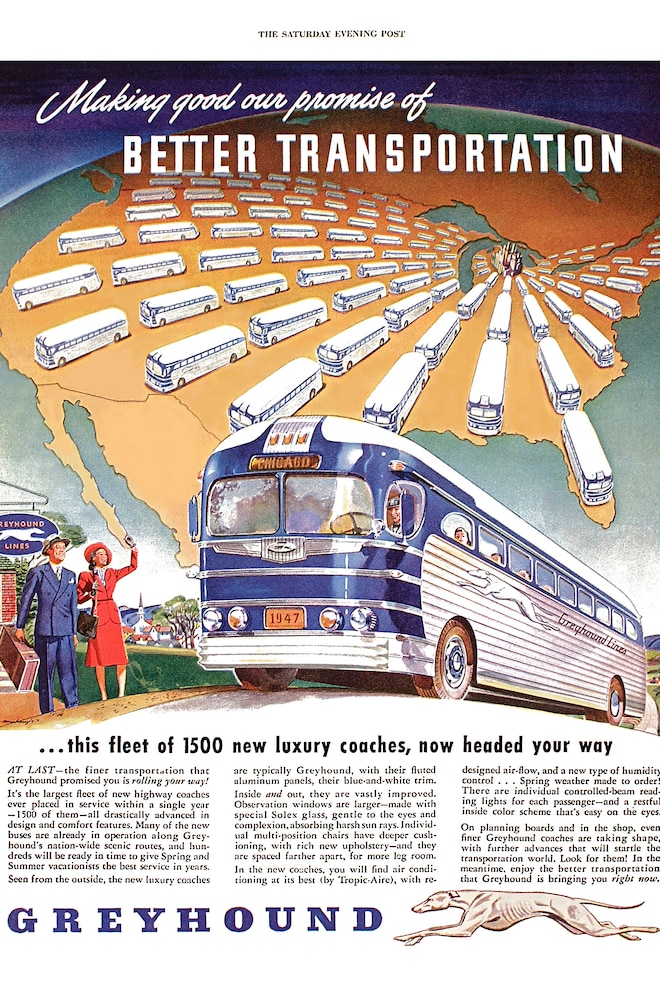