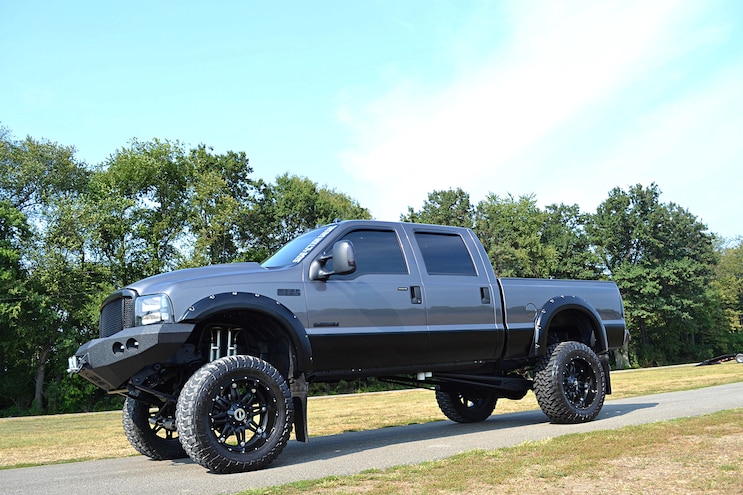 With a huge, 8-inch lift and 37-inch tires, it’s impossible to miss Josh Palm’s ’04 Ford F-350 when it’s rolling down the road. What isn’t immediately evident is the serious “go power” the truck’s 6.0L engine displays when Josh mats the throttle. “What started out as a simple build turned into rebuilding the truck from the ground up,” Josh says. With the help of Brenton Lindenberg, owner of Side Action Diesel Performance, the factory Power Stroke engine was torn down to its short-block and fitted with ARP head studs and Side Action Diesel valvesprings. “We knew we wanted to go pretty big as far as usable power goes, so both the fuel system and turbocharger system were completely reengineered," Brenton says. 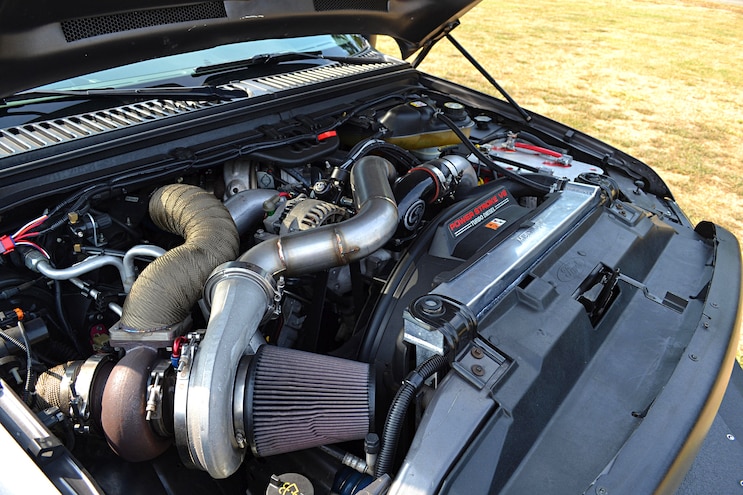 View Photo Gallery | 28 Photos
Photo 2/28   |   It's not often that you'll see a compound-turbocharged Ford 6.0L Power Stroke, but Josh wasn't pulling any punches on his engine build. With a conservatively estimated 600 hp, the powerplant moves the big F-350 along at a rapid pace. 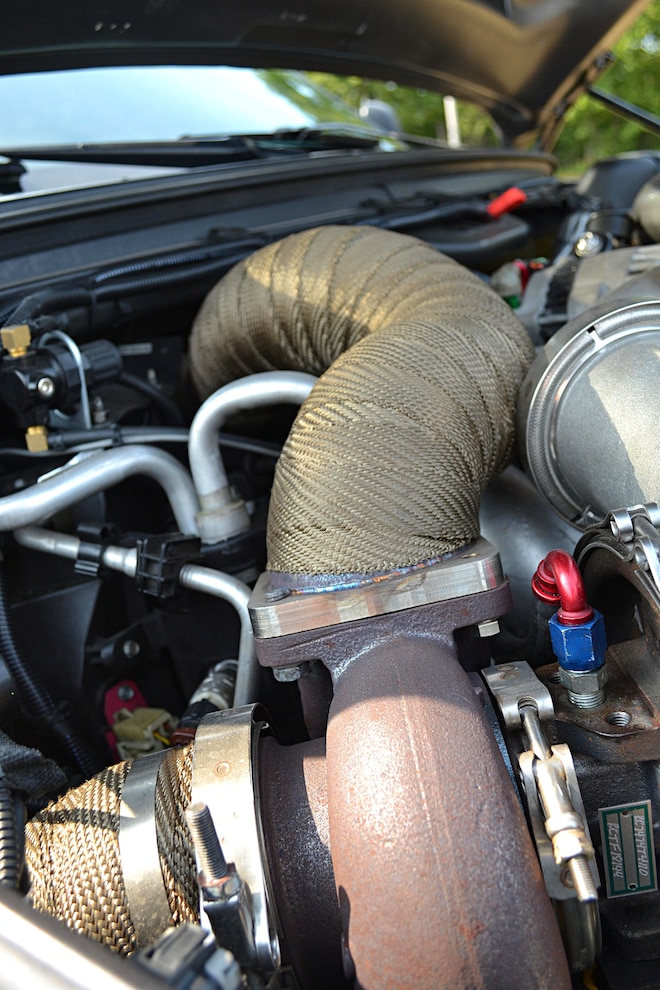 View Photo Gallery | 28 Photos
Photo 3/28   |   With a turbo positioned in the valley of the engine, configuring a compound setup is always a difficult proposition. Fortunately for Josh, Side Action Diesel was able to accomplish such an install, using 65mm VGT high-pressure and 75mm atmospheric ’chargers. The total boost output from this pair is regulated to a mild 50 psi. 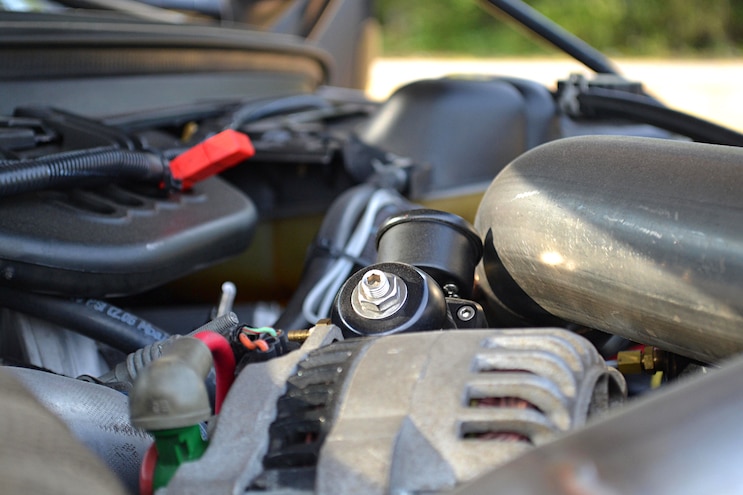 View Photo Gallery | 28 Photos
Photo 4/28   |   The engine's fuel system was upgraded with Driven Diesel’s regulated-return kit, along with a DieselSite high-pressure oil pump and Maryland Performance Diesel 230hp/100-percent-over injectors. Custom tuning is handled by KEM Performance.
The modified fuel system starts back at the tank, where a high-pressure AirDog II 165-gph lift pump draws from the tank. Maintaining accurate fuel pressure is vital to the engine's performance, so a regulated-return system from Driven Diesel was also added. The high-pressure oiling system is upgraded with a DieselSite high-pressure oil pump (HPOP) that fires Maryland Performance Diesel 230hp/100-percent-over injectors. Custom tuning for the fueling is handled by KEM Diesel. 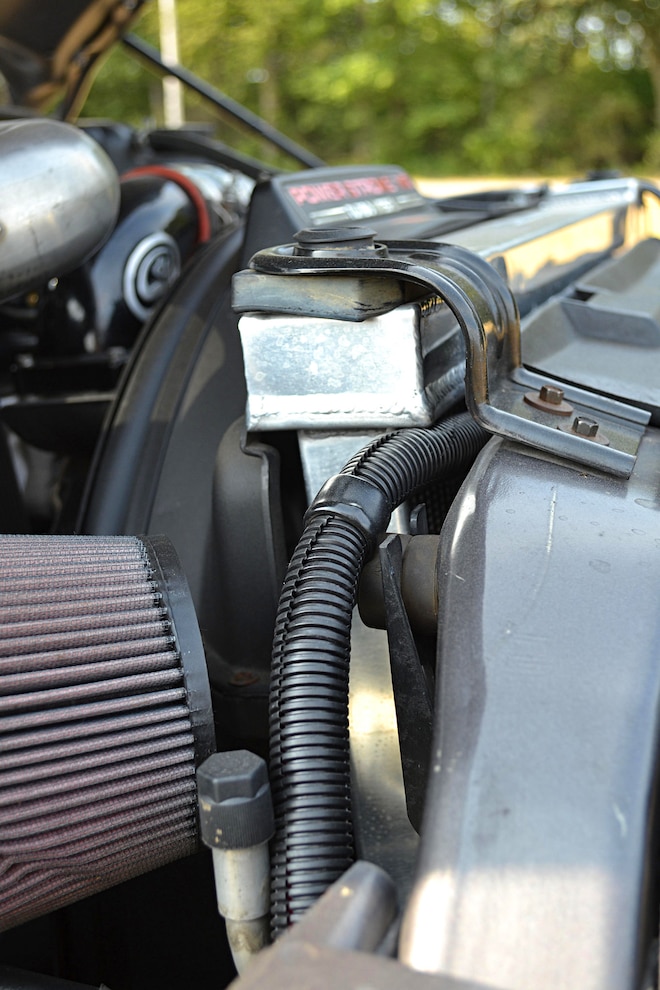 View Photo Gallery | 28 Photos
Photo 5/28   |   Tucked neatly in front of the atmospheric turbo is a Mishimoto radiator. Since Josh still tows regularly with the truck, it was added to ensure coolant temperature remains low when the engine is working hard. 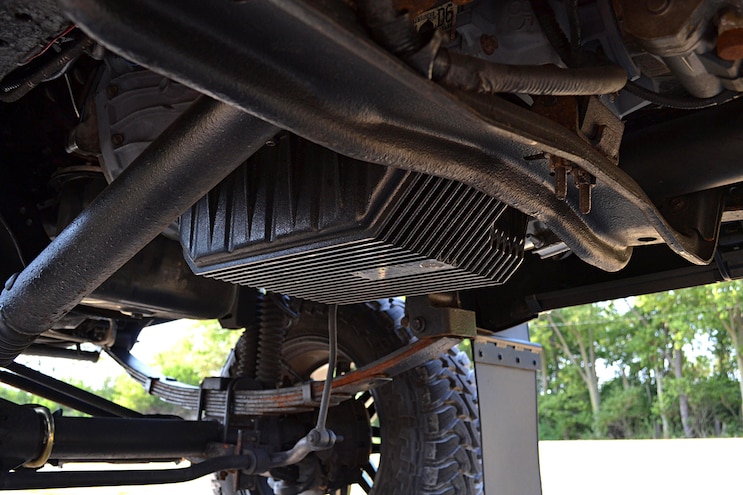 View Photo Gallery | 28 Photos
Photo 6/28   |   The Ford 5R110 five-speed automatic transmission is perhaps one of the truck’s most overbuilt components. Since Josh only wanted to do the job once, the unit received a SunCoast Diesel Transmissions torque converter and a number of internal upgrades. Assembly was performed by Side Action Diesel.
The entire turbo system was built by Side Action Diesel and features Side Action’s own 65mm variable-geometry turbocharger, along with a 75mm BorgWarner S400 as an atmospheric turbo. “The whole system is built around efficiency and quick spooling,” Brenton says. With an engine making roughly 600 hp on a mild tune, the factory transmission also received attention, with an upgrade by Side Action Diesel. “We built the transmission extremely stout, for whenever Josh wants to turn up the power on his setup,” Brenton says. The 5R110 five-speed automatic transmission features an extremely strong Aermet input shaft, extra clutches, aftermarket low and reverse planetaries, and a torque converter from SunCoast Diesel Transmissions. 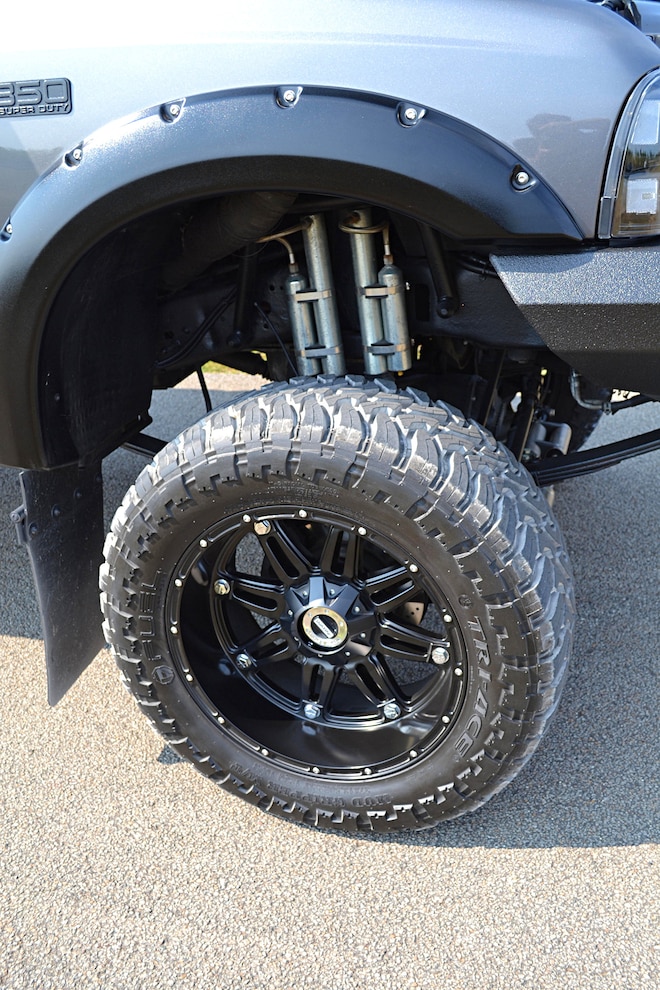 View Photo Gallery | 28 Photos
Photo 7/28   |   Josh wanted lock-to-lock turning even with big, 37-inch tires, so a set of Bushwacker fender flares was included in the build, allowing the Ford to retain its turning radius. 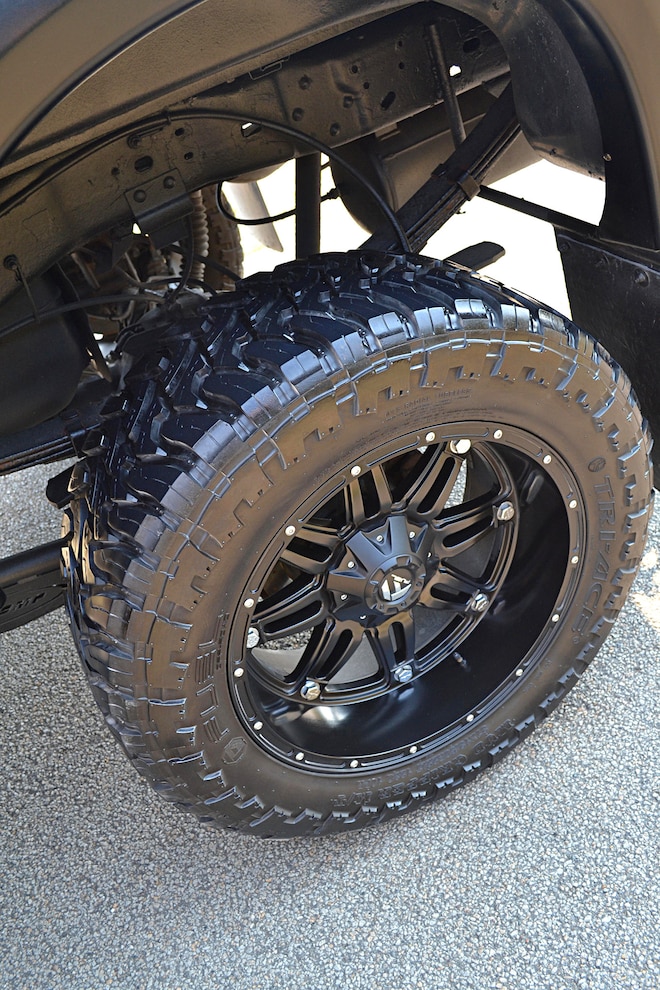 View Photo Gallery | 28 Photos
Photo 8/28   |   Speaking of tires, four 37x13.50R22 Fuel Mud Gripper tires are mounted on 22x10 wheels (also from Fuel) and give the big rig plenty of traction in virtually all situations.
With enough power to put a smile on Josh's face, there was still the matter of matching the truck's looks with its performance. Josh turned to Detailing by David to accomplish the task of transforming the rig from mild to wild cosmetically. The modifications included Road Armor bumpers front and rear, a Pro Comp 8-inch lift, AMP Research side steps, and massive 37-inch rubber on 22-inch wheels. Even the body got some attention, with Bushwacker fender flares and a hood from Cervini’s Auto Designs. While there are lots of lifted trucks out there, not many pack the punch of a compound-turbo setup with custom tuning. “These projects are never quite done, but I'm extremely happy with where it is thus far,” Josh concludes. View Photo Gallery | 28 Photos
Photo 9/28   |   The interior is one area where Josh keeps things simple and utilitarian. Other than the seat covers, the only addition is a three-gauge A-pillar pod, which houses instruments used to monitor boost, exhaust gas temperature, and transmission temperature. 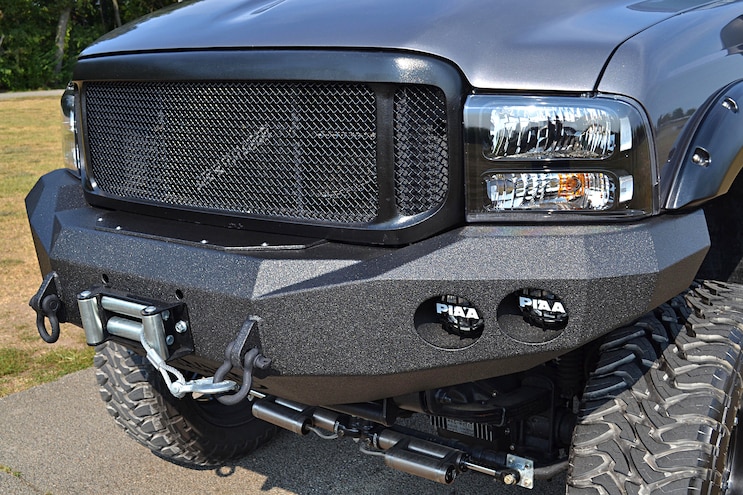 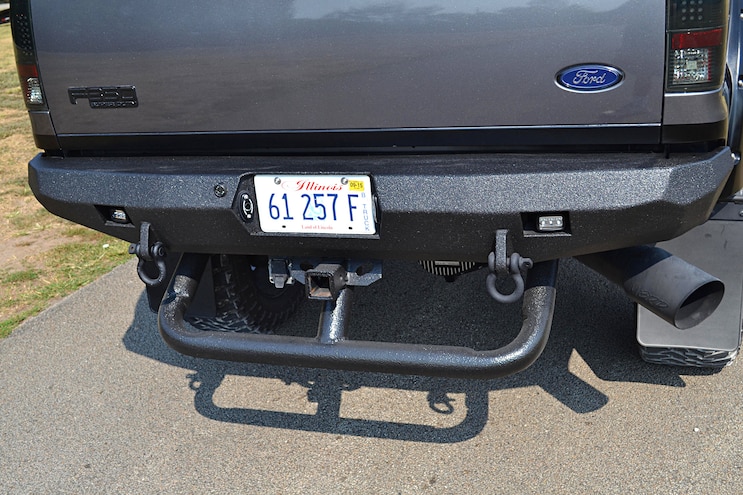 View Photo Gallery | 28 Photos
Photo 11/28   |   The rear bumper was also given a hitch support and a backup camera that's especially helpful when towing. 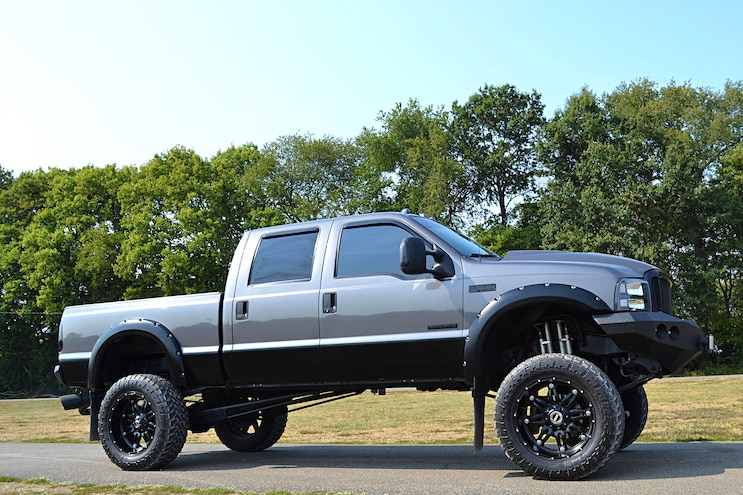 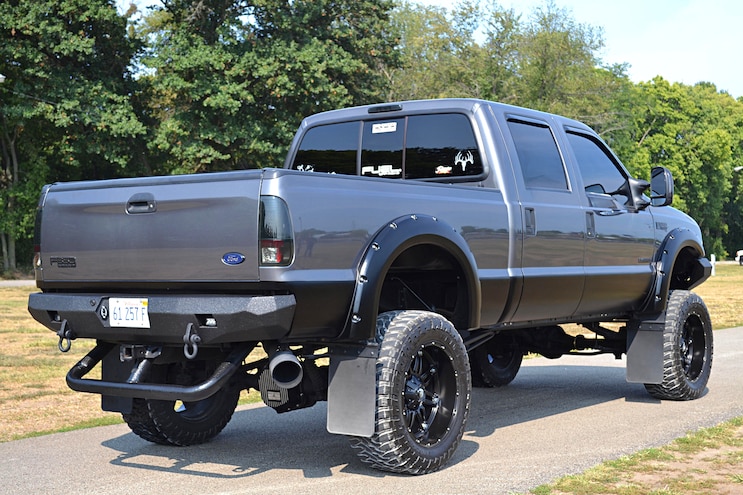