This 2005 Chevrolet Silverado 2500HD is a Well Dressed Brute 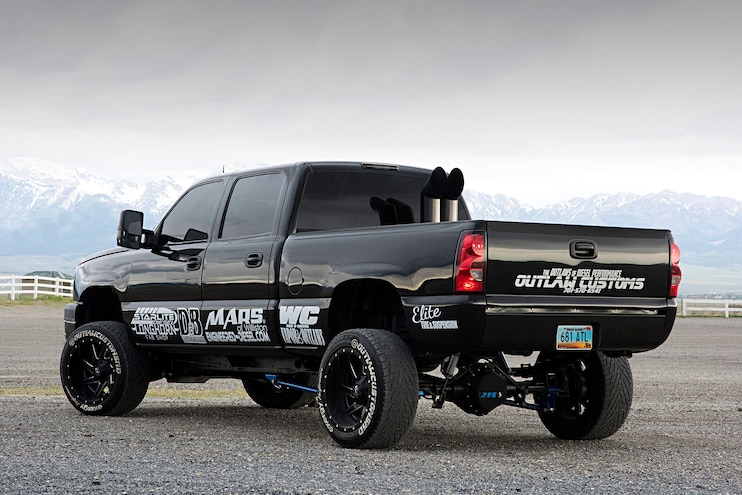 It’s funny how a change in perspective can lead to something significant happening in life. Take Matt Logan of Outlaw Customs Diesel Repair & Performance in Williston, North Dakota, for example. He decided it was time to replace his ’05 Chevrolet Silverado 2500HD with a new rig, and he went so far as to order the truck from the dealer and everything.
Shortly thereafter—and long before the new truck was slated to arrive—Matt took a long look at the Silverado he was replacing and thought he may have made a mistake. “I decided to take all the money I was going to spend on the new truck and put it into the ’05 to make what I wanted,” Matt says. “After spending about twice the amount I would have spent on the new truck, I have exactly what I wanted!” 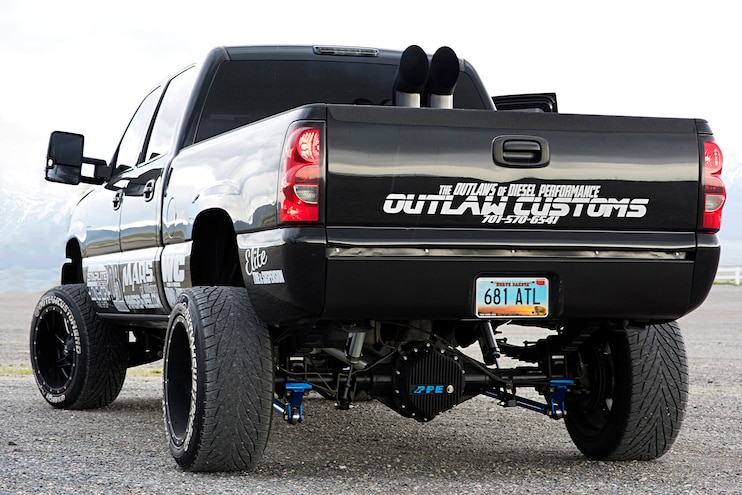 View Photo Gallery | 15 Photos
Photo 2/15   |   The addition of a roll pan at the rear of the truck certainly cleans up the look. Here you can see the AAM 1150 rearend, which houses 3.73 gears and gets the majority of the abuse from the 6.6L Duramax LLY engine.
Matt belongs to the legion of motivated young men around the country driving the diesel performance scene, and he is doing it through hard work, experimentation, and, most importantly competition. “I am an up-and-coming guy in the industry,” Matt says. “I built this truck for myself, and I built it to compete with. Through 2016, I am keeping it in the state it is in, but for 2017, I am really planning on getting after it with the hopes of competing at some of the most well-known diesel events in the country. It is nerve-wracking to think about jumping in there with the big boys, but I know I have to try.” Currently, the truck’s 6.6L Duramax LLY engine makes more than 850 hp and 1,400 lb-ft of torque, which is far more than double its output in stock form. 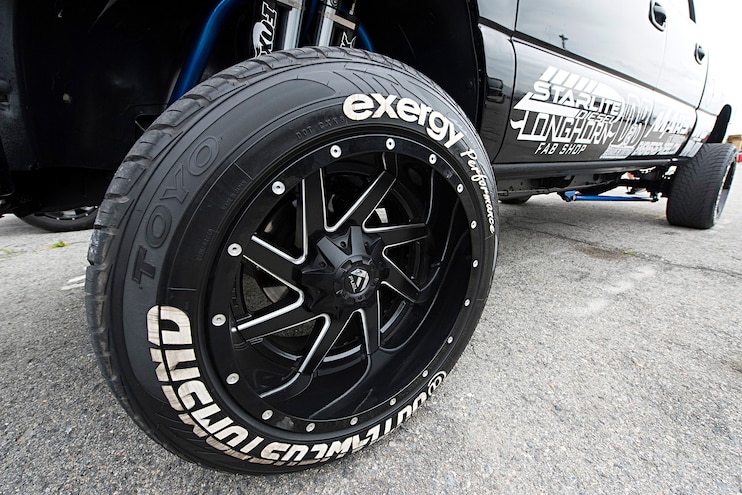 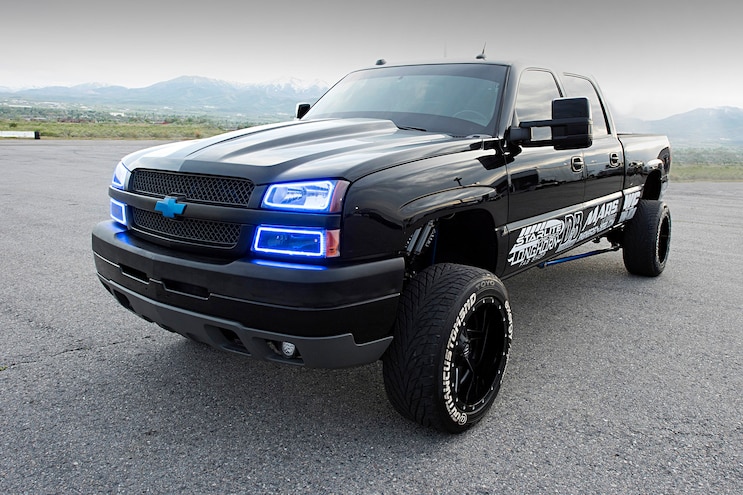 View Photo Gallery | 15 Photos
Photo 4/15   |   Four inches of lift give the truck great presence, but the lights Matt modified himself really set this Silverado apart. The blue hue of the LEDs matches the color of the engine and transmission.
The overriding theme for this truck’s build is detail. You won’t find many guys willing to take an ’05 Silverado down to the bare frame and then spend two years pouring their heart, soul, and wallet into it. You also won’t find many guys with a truck of this caliber, so maybe that all makes sense. “I’m the kind of guy who cannot go to sleep at night if I know there is so much as a wire tie out of place somewhere,” Matt says. If you think he is kidding, consider the fact that when having the engine assembled, he asked to have the block painted the same shade of white as his shop toolbox. Continuing that concept, everything that bolts to the engine—including the transmission—was painted a shade of blue that matches the color of the LED lights he has ringing the factory headlights. After completely taking the truck apart and rebuilding it system by system, Matt is a certified expert on every inch of the rig. “I think I had about two full weeks of time on the wiring alone,” Matt says. “Between shortening stuff, lengthening stuff, and making sure it’s all nicely routed and functional, it was a long job.” 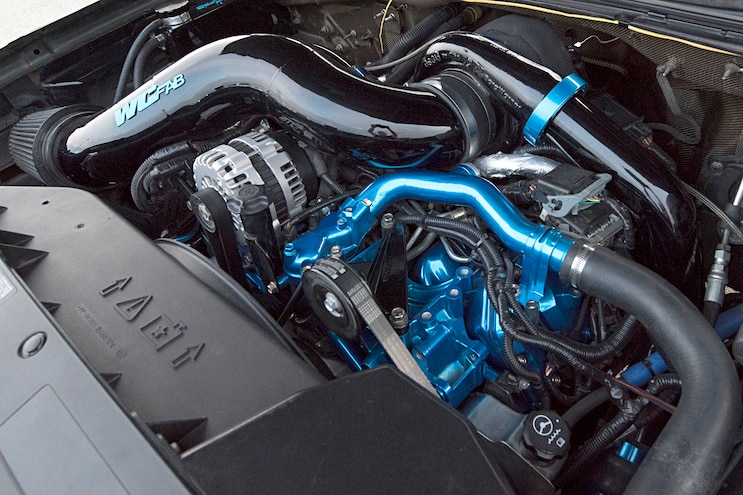 View Photo Gallery | 15 Photos
Photo 5/15   |   One thing that stops people in their tracks is the engine’s brilliant shade of blue. The block itself is actually painted bright white.
When you consider the level of work that went into modifying this truck, you also have to consider that Matt was being ultra-careful not to scratch its freshly painted, coated, and polished surfaces. “I am sure if I was not trying to be so careful and keep the level of detail so high, I could have done the job faster. But that is just not who I am,” Matt tells us. “Overall, it went smoother than I thought, and I love the truck. I actually sit and look at it, and I really cannot believe it’s mine or that I poured all that work into it.” The good news is he’s not the only one blown away. The truck has become a calling card for Matt’s business and has proven an effective tool to help the fast-growing shop get its name out and about in the community.
With experience on the chassis dyno and on the eighth-mile dragstrip (where the truck has already run faster than 95 mph), its next form of competition will be pulling, Matt says. But, he adds, he’s not rushing into it. “I have not done a lot of pulling, and I know I am going to need experience in order to really get into the big competitions. I guess I am trying to keep the truck as nice and clean and perfect as I can for the longest possible time. I know the time is coming when it will have to have a sled behind it, but I am waiting for that.” 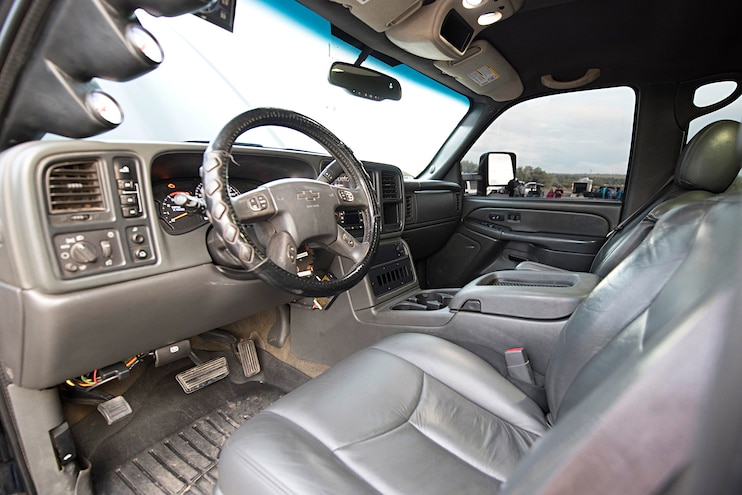 View Photo Gallery | 15 Photos
Photo 6/15   |   With the exception of Auto Meter gauges, a Longhorn Fabrication dash insert, and a beefed-up stereo system, the interior is largely stock in this Silverado 2500HD.
There are lots of great quality components involved in the build, and they are all there for a reason. Nothing on this rig is simply window dressing, designed to pull someone’s attention away from another area that is lacking. The engine itself is different because it does not have the typical Duramax build style we are used to seeing. Rather than triples or even a pair of turbochargers in a compound configuration, the Duramax has a single Engineered Diesel–modified BorgWarner S475 turbo. The fueling is interesting as well, employing a FASS Diesel Fuel Systems 220-gph Titanium lift pump, an Exergy Performance 12mm stroker fuel pump, and Exergy’s 100-percent-over injectors. Matt’s Duramax will surely garner some second looks from diesel fans who look in the engine bay expecting to see the same old stuff they are used to seeing. There are some complications that go hand in hand with being unique, though. “It did take us some time to get the transmission dialed in, because the engine is not the normal Duramax animal,” Matt explains.
That’s the cool thing about the universe of diesel performance: guys like Matt who are working hard to develop their own styles, businesses, and ways of doing things to help drive the industry forward. This ’05 Chevrolet Silverado 2500HD is a lot more than a calling card for Matt’s business—it is a statement about his abilities and his obsession with perfection. Think obsession is too strong a word? Consider the first letter in each of the three words that make up his business name. Outlaw Customs Diesel. Just as we thought—not too strong at all. 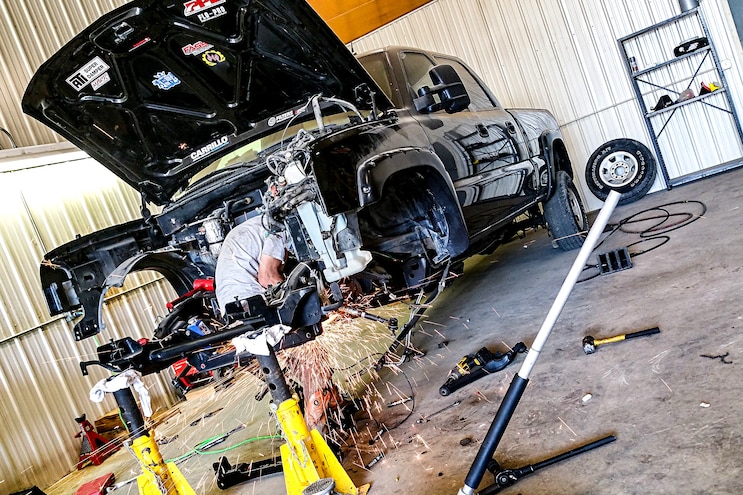